So, Your Kid Is Learning To Drive...

Here’s how to stay as sane (and safe) as possible when they’re behind the wheel. 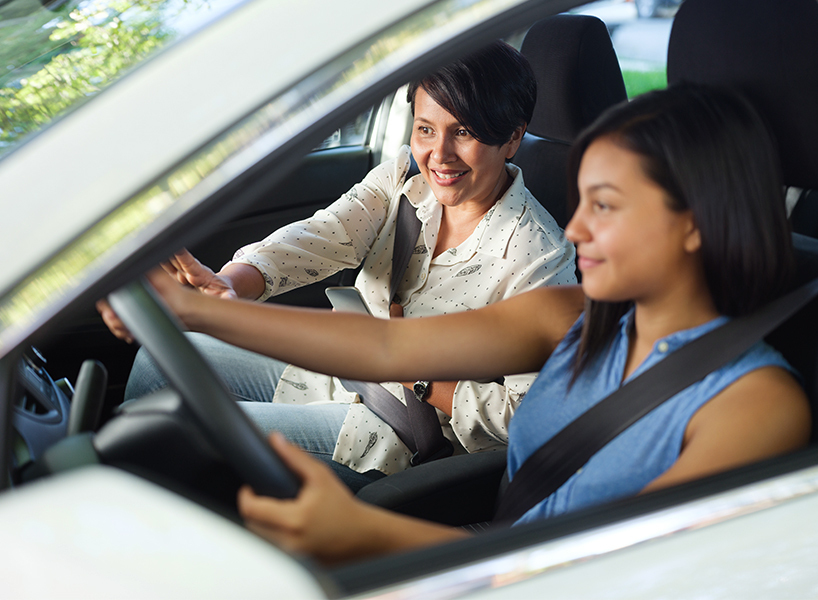 In partnership with Surex

Playing passenger to a pre-licensed teen is right up there with acne, dating and college applications on the parental stress scale. And while this rite of passage has always been fraught with potential potholes—including left-hand turns, merging onto highways, rogue dump trucks and squirrels—there have never been more distractions for modern drivers.

But fear not: There’s plenty parents can do to mitigate the sensory onslaught that comes with learning to drive. To make the learning process less stressful, we asked parents and experts to share their advice on what helped make riding with their eager teens a smoother journey.

“Teen drivers have to develop the skills to physically maneuver their cars, but they also have to feel [emotionally] safe. As a parent, if you’re in the learning role with your children, your nerves can be contagious. Your teen might interpret your stress as being reflective of what they are or aren’t doing. Be aware of your own emotional state before you enter the car. Be aware of your teen’s emotional state. How they’re responding may have nothing to do with you or what’s happening on the road. Teens and children have a highly developed antenna for their parents’ [moods], so they may interpret that as a criticism of them. You want to be in a place of non-reaction, but responding. Occupy more of a coaching mentality. Say, ‘Tell me what happened just then,’ if they roll through a stop, and elicit their analysis of what they did or didn’t do. We can’t take in information if we’re in a heightened emotional state. And take a break if you’re feeling frustrated. Pull over and breathe.” —Ellie Lathrop, MSW, RSW, Toronto Counselling Centre for Teens

“The pandemic hit, so I knew my son wouldn’t be able to take drivers ed for a long time—so we needed to find a way for both of us to stay calm. We laid out some rules: No radio (at first), both hands on the wheel, the usual stuff. Also, if I said to stop or pull over, that had to happen with no questions asked. It was also about establishing the right mood and mindframe. If my son was angry or grumpy, or it just didn’t feel right for him, then no driving. We both promised to resist the urge to have profound conversations. The car has always been a place we could talk about stuff, but he needed to focus.” —Rochelle S., parent, Toronto

Keep your eyes on the prize

“By far, the biggest tip for parents is to remind their child to watch where they’re going. If someone gets too close to the curb, it’s because they’re looking at the curb. It seems obvious, but you should never look at what you’re scared of—even though that’s a natural human instinct. It’s okay for them to feel stressed, but worrying often means making a mistake in the car. Instead, look at where you want to be.” —Darren Riber, owner, Golan Driving School, Toronto

Get a feel for the wheel

“There’s a lot you can do to control external factors, like mapping a route that’s only right turns [at first], or practicing in the empty parking lots (the usual safe route). But inside the car, I broke everything down [and explained exactly what to expect when turning and accelerating]. I wanted to make sure my son knew what each move would feel like — not just when you step on the gas, but when you’re cruising and you’re not pressing on the gas or signalling. It helped me, too, because it’s nerve-wracking for parents. It’s not like you have a brake to slam on if something goes wrong.” —Susan S., parent, Oshawa, Ont.

“A lot of people are so focused on the road and other vehicles that they tend to forget about pedestrians, who are just as important as a car or a bike. I remind my son to be aware of people crossing the street, especially when they shouldn’t be. You just don’t know who’s paying attention, and unless that person has a suit of armour on, that’s going to be a bad accident.” —Anne M., parent, Oshawa, Ont.