Missed September's Climate Strikes? There's Another One Scheduled This Month

The Global Climate Strike hopes to draw attention to the worsening climate crisis. 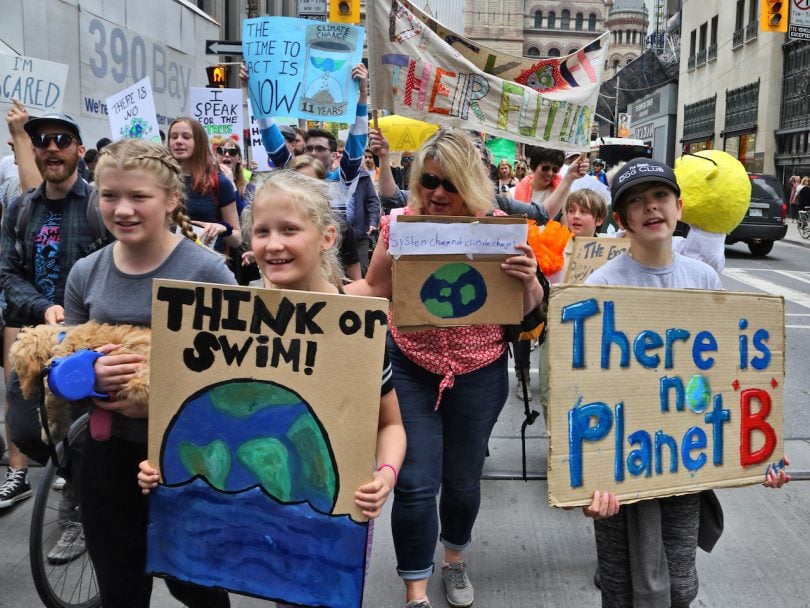 UPDATE: Fridays for Future announced that the next global climate strikes will take place on November 29 and December 6, 2019.

December 6 is in the middle of COP25 (the UN Framework Convention on Climate Change) and protestors are hoping to show world leaders convened in Madrid for the conference that they are not willing to continue with business as usual. Greta Thunberg will be crossing the Atlantic Ocean, travelling from Virginia to Spain, to attend COP25. She’ll be riding with an Australian family on their solar and hydro powered boat La Vagabond.

Strikes are scheduled worldwide. In Canada, check out this link to find a strike near you.

NEXT GLOBAL CLIMATE STRIKE! The 29th of November is #ClimateActionDay and cities all over the world will have strikes and demonstrations for the climate. The 6th of December is in the middle of COP25 and climate activists, children and youths will be joining strikes and demonstrations to urge our politicians to act for our future and secure a safe pass way under 1,5 degrees of global heating. #fridaysforfuture #fff #climatestrike #schoolstrikeforclimate #gretathunberg #climatejustice #environment

There have been a ton of terrifying reports and studies about the escalating global climate crisis. According to a report from the UN climate change panel released last October, if we don’t act now, we will face the severe effects of a warming planet—including food shortages and worsening wildfires—as early as 2040. Despite the alarming warnings, many governments have not supported legislature that would slow down the rise in global temperatures. In Canada, for example, current policies are consistent with global warming of up to four degrees Celsius by 2030—more than double the “safe” levels set out by the Paris Agreement.

Young people worldwide believe that their futures are in jeopardy because of the climate crisis and they’re calling for more aggressive targets for cutting greenhouse gas emissions to keep warming in check. On September 20th, and again on September 27th, they’ll be skipping school and taking to the streets to draw attention to the global climate crisis. And they’re calling on *everyone* to join them. Here’s everything you need to know about the climate strikes.

What are the climate strikes—and how did they get started?

In August 2018, then-15-year-old Greta Thunberg began skipping school every day to protest in front of Sweden’s parliament in the weeks before the Swedish general election. She demanded climate legislation that would bring Sweden in line with the Paris Agreement (keeping global temperatures to 1.5 degrees Celsius above pre-industrial levels). After the election, Thunberg continued to skip school to strike on Fridays, inspiring thousands of young people worldwide to follow suit. Since Thunberg’s Friday strikes, youth around the world have protested in front of their local legislatures on Fridays in solidarity, beginning the #FridaysForFuture movement.

In a culmination of all their efforts, strikers from 117 countries are calling for massive global climate action, by everyone, on September 20th and again on September 27th—a full week of concentrated action that the strikers are calling the #WeekForFuture movement.

Why are they striking?

The strikers are asking that their governments take action on climate change and recognize the urgency of the climate crisis. According to the Global Climate Strike website: “Our house is on fire. The climate crisis is an emergency but we’re not acting like it. People everywhere are at risk if we let oil, coal and gas companies continue to pour more fuel on the fire.”

By striking a few days before the UN’s emergency climate summit in New York on September 23, and a few days after it ends, the climate strikers are hoping to show world leaders that people, especially young people whose futures are at stake, are not willing to continue with business as usual—not when the Earth’s temperature is changing rapidly. Strikers are hoping that this set of strikes will kick-start a huge wave of action on the climate crisis all over the world.

Their demands include building a “Green New Deal” (which, among other things, calls for transforming the economy to 100 percent renewable energy by 2030), respect for Indigenous land and sovereignty, environmental justice (investing in communities affected by poverty and pollution), protecting biodiversity and making agriculture more sustainable.

Since sparking a global youth movement, Greta Thunberg, the 16-year-old climate activist, has become a global celebrity. Most recently, Thunberg embarked on a two-week journey in a carbon-neutral racing yacht across the ocean from England to New York. The teen chose not to fly to New York, citing the carbon impact of air travel. Thunberg will speak at the UN’s Climate Action Summit in New York on the 23rd. The summit was called by UN Secretary-General António Guterres, who asked that all leaders come with “concrete, realistic plans to enhance their nationally determined contributions by 2020, in line with reducing greenhouse gas emissions by 45 percent over the next decade, and to net zero emissions by 2050.” Thunberg will also join New Yorkers at their strike on September 20th and Canadian strikers in Montreal on September 27th.

Sept 20 and 27 the World strikes again! Everyone is welcome, everyone is needed. I’ll be in New York 20/9 and in Montreal 27/9. Find or register your local strike at https://t.co/G06WbXNvl1 or local websites. Spread the word! #fridaysforfuture #climatestrike #schoolstrike4climate pic.twitter.com/BNI7ZywpsL

Can people of all ages join the strike?

Yes! In fact, it’s vital. According to Jamie Margolin, an American 17-year-old climate activist from Seattle and co-founder of Zero Hour, “now, more than ever, we need people of all ages to join youth in the streets. The time has come for all of us to leverage our collective power to stop fossil fuel billionaires […] and hold the politicians who’ve aided and abetted them accountable.”

Many NGOs and unions have expressed their support for the global climate strikes, including 350.org (an international organization which advocates for a fossil-fuel-free world), Amnesty International, Extinction Rebellion (a which protests against climate breakdown and biodiversity loss), the Indigenous Environmental Network, Greenpeace International, Oxfam and the World Wildlife Fund.

Some businesses will also be supporting the strike. Ben and Jerry’s, Patagonia, Burton and Lush Cosmetics are just a few of the companies that will be “using their platforms to raise awareness and highlight the urgent need for action on climate.”

Over 900 Amazon employees have also signed an internal petition to walk out of their offices on September 20th. Though most of the employees who have signed the petition are based at the headquarters in Seattle, employees in other offices have indicated support for the walk-out. The employees are calling for Amazon to stop donating to politicians and lobbying groups that deny the reality of climate change, stop working with oil and gas companies and achieve zero carbon emissions by 2030.

Sounds great, I’m in! Where and when are strikes taking place in Canada? 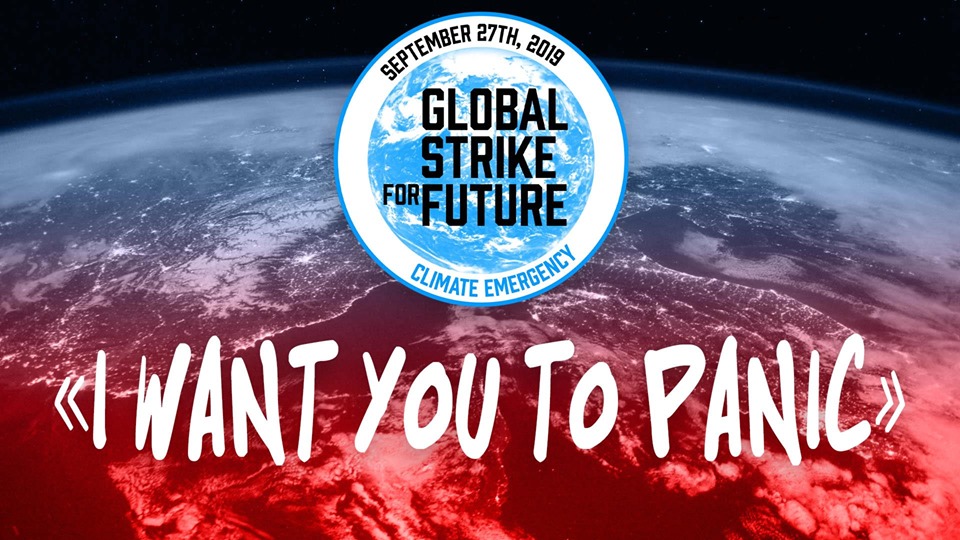 Poster, Global Strike for Climate – Toronto/GTA, Facebook. Note—Canadian strikes are happening on both the 20th and 27th.

Take a look at this map to find a strike near your community. Canadian strikes are happening on both the 20th and 27th.

What else do I need to know? What should I bring?

Before going, make sure to RSVP to the strike you plan on attending (this might mean RSVPing on the website or clicking “going” on the appropriate Facebook event, if there is one). It may seem inconsequential, but RSVP numbers are really helpful for organizers so they know how many people to expect and prepare for. And talking to your friends and families, or posting on social media about the strike, why it matters and inviting them to attend with you is also a great way to spread the word.

On the day of, bringing a creative sign is a good way to make yourself heard and gets the message across to the public and media. The climate strikers have developed an international reputation for their clever and irreverent signs—you’d be in great company if you brought along your own witty sign. Here’s an arts kit compiled by Climate Strike Arts with inspiration for poster designs, how-to guides and tips on getting a great photo.