How To Build A Feminist City: Make It Inclusive

In this section of our three-part series, we look at ideas for building cities that accommodate children, resist anti-Blackness and make sure that everyone has a safe and healthy home. 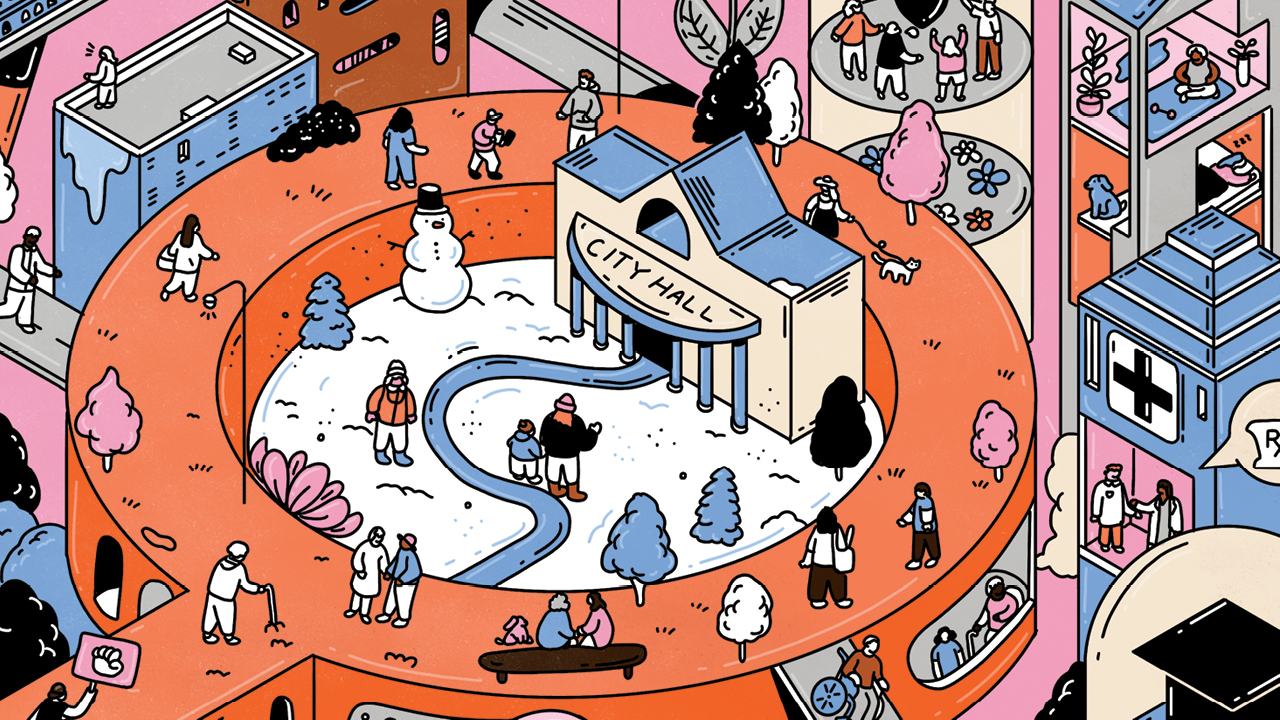 This is one part of a three-part series on what a feminist city would look like. Read about the idea and find the other sections here. 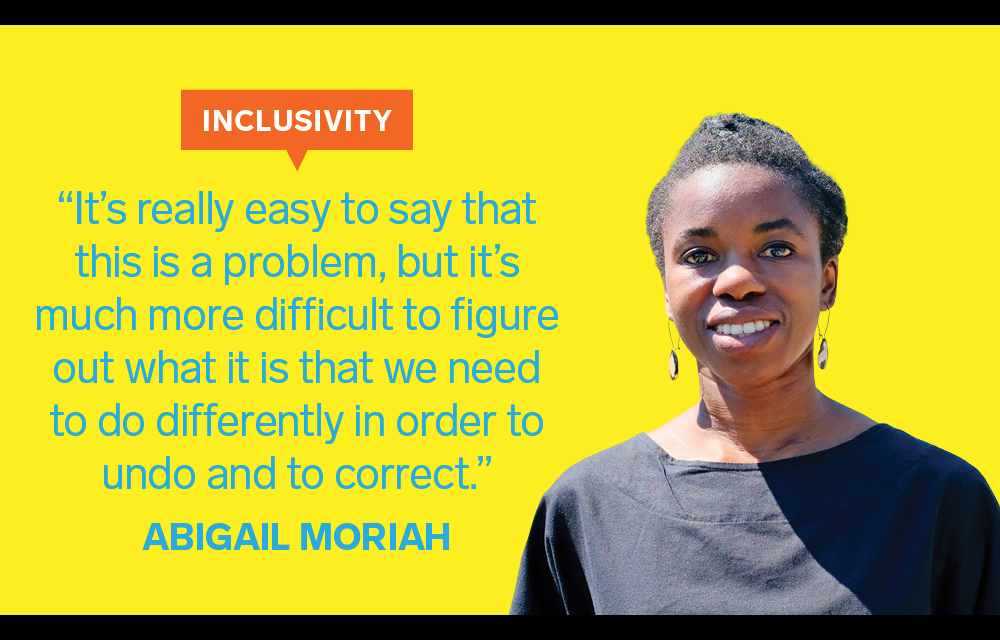 Canada’s cities are exclusionary and anti-Black by design, says Moriah, set up to mainly serve the interests of white communities with the means to buy their homes instead of renting. To her, a feminist and anti-racist approach to planning would mean increasing affordable housing, improving transit and cleaning up environmental hazards. It would also mean creating spaces where Black and Indigenous people can feel safe, celebrated and free from police surveillance.

But a lack of diversity at the teaching level means the next generation of Canadian planners aren’t necessarily equipped to do that. Moriah says that student groups in the University of Toronto’s department of geography and planning had long called for greater representation in the planning faculty. Those demands were amplified last year during Black-liberation demonstrations in the wake of the death of George Floyd, a Black man in Minneapolis who was killed by a police officer. And in April, the University of Toronto agreed to adopt 56 recommendations from the school’s Anti-Black Racism Task Force, including creating pathways for Black staff to fill senior leadership positions as they become available.

Moriah is also conducting an anti-Black racism audit of the planning programs offered to master’s and PhD students. “Teaching makes a huge impact on students, as well as research that’s being done, as well as the focus of that research,” she says. 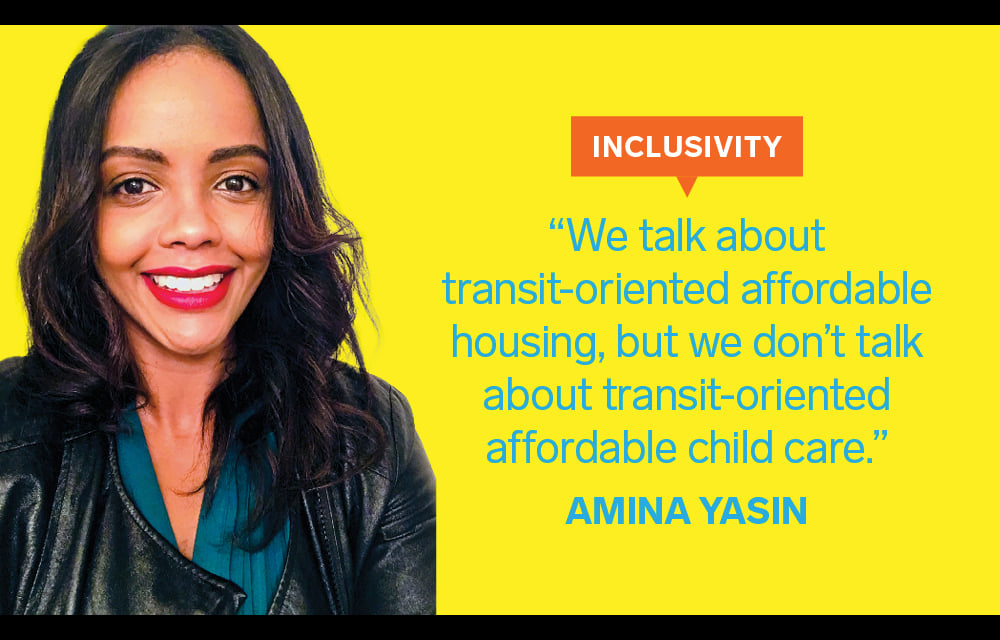 Think of the children

Child care tops a long list of complex and costly challenges historically borne by women. And housing prices have pushed families across
Canada outside urban cores, forcing women who rely on transit to take multiple trips as they drop children off, go to work, run errands, get to appointments and do it all again in reverse at the end of the day.

“Women’s movements are not linear in public space—especially [those of] racialized and low-income women,” says Yasin, a city and regional planner in Metro Vancouver. “It’s absolutely very important for us to delve into the power and societal interactions in our
built environment and how they create barriers.”

Yasin believes she has found a practical solution to this thorny, long-standing problem. She imagines a smarter use of existing public space that would see child-care centres directly linked to public transit: Her research considers how extra space in parking lots, or even on top of transit buildings or parkades, could be used for daycares.

Creating affordable child-care spots at those points of contact would streamline women’s days, she says, freeing up much-needed extra time. 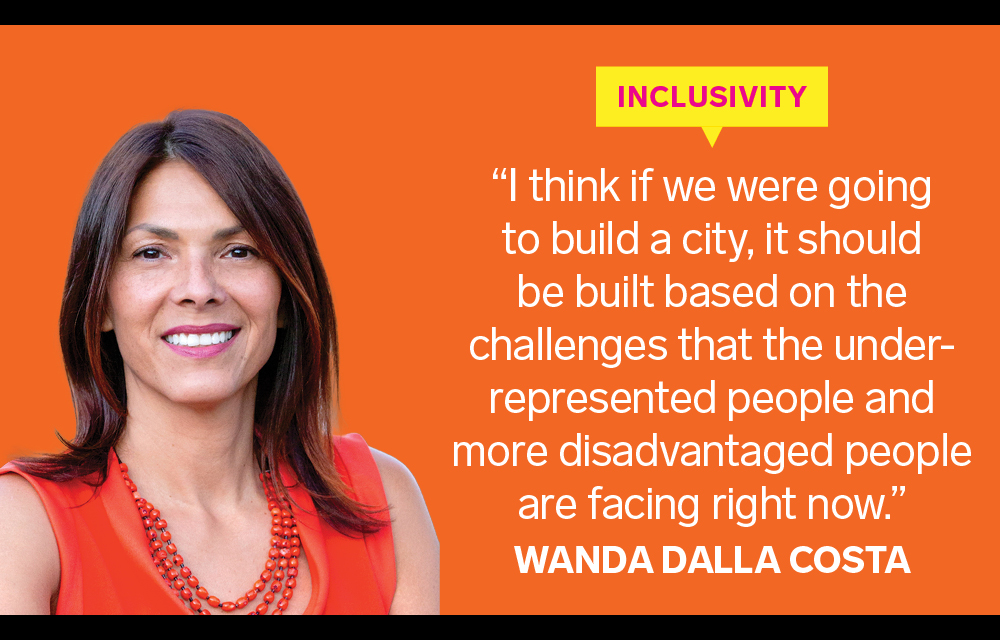 Cities that connect people to one another and the natural world result in healthier, more sustainable environments for everybody, says
Dalla Costa, a member of Saddle Lake Cree Nation in Alberta. That means getting more “eyes on the street,” she says, referencing an idea attributed to famed urbanist Jane Jacobs: Getting people out into public spaces encourages them to care about their communities and feel empowered to keep one another safer. Green spaces also give women, children and families ways to connect and unwind, and have a positive impact on health.

For guidance, Dalla Costa says that planners would do well to look to Indigenous design. Canada is young compared to original civilizations both here and around the world, she says, many of which used wind for natural cooling and architecture that lets in light from the sun.

“Because we are the First Peoples, we can start that conversation” around design and sustainability, says Dalla Costa, who founded the
Indigenous Design Collaborative at Arizona State University. In New Zealand, she notes, Te Aranga Māori Design Principles—which aim to
create unity, foster knowledge and self-determination, and promote environmental stewardship and spiritual connection to the natural
world—are built into a range of current and upcoming projects.

As part of her work, Dalla Costa partnered with a Blackfoot Elder to create a room in the Niitsitapi Learning Centre in Calgary. It
features 360-degree views of the sky and can be entered from four directions, elements she says are core to Indigenous beliefs.

“Typically we design cities based on the highest and best use of economic return [on space],” says Dalla Costa, which she says is poor planning. The firm she works at, Tawaw Architecture, is leading the design of eight mini homes on a reserve in Alberta that will serve as transitional homes for community members experiencing homelessness.

“The most under-represented voices in our cities and in architecture are often the most disadvantaged,” she says. They are also most likely to be directly harmed by the impacts of climate change, including deadly heat waves.“They also have the very important
position of being the canaries….If we listen to their challenges, it will tell us a lot about other people’s.”