Toronto Star labour reporter Sara Mojtehedzadeh on why COVID-19 hit migrant farm workers in Canada with such force—and why we should have seen this coming. 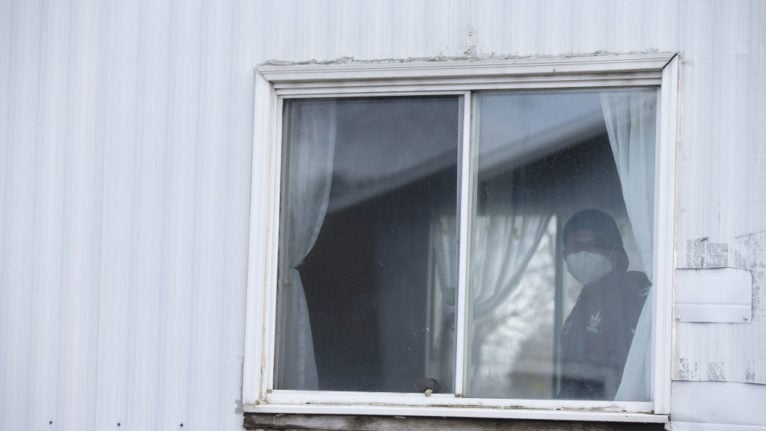 A migrant worker wearing a protective mask stands inside a trailer while starting a 14-day quarantine at a farm. Photo courtesy of Getty Images.

It’s late February in a small town two hours south of Mexico City, where the air sharpens with cold when the sun sinks behind the mountains. The village of 6,000 residents is bustling in preparation for a patron saints festival. The local market is brimming with produce, and the streets are humming with tractors driven by the men who harvest it.

Soon, the men will be gone.

I went to Cuijingo last year ahead of its annual exodus to Canada, when it transforms into a town “of only women and children,” as one resident put it.

As a labour reporter for the Toronto Star who has covered migrant work for years, I wanted to understand the impact of this cycle of migration—a cycle that Canada’s food production depends on—on families across Mexico. This year, with more than a thousand migrant workers testing positive for COVID-19, I’m thinking more than ever about what I saw there.

The streets of Cuijingo are alive with the complicated, living legacy of Canada’s Seasonal Agricultural Worker Program (SAWP), which brings tens of thousands of farm labourers from Mexico and the Caribbean to plant, pick, and process our crops each year.

The tractors chugging through the streets started appearing around 15 years ago, along with sturdier homes, both products of money sent home from the north. As Canadians, this is the story we hear most often about migrant labour, one of hard work and reward. The one that’s easy to digest.

It’s not that this version is factually inaccurate: Mexican workers in Canada send home more than $400 million in remittances annually through the SAWP. But this is only part of the story—and it doesn’t explain why the pandemic hit migrant workers in Canada with such force. Chatham-Kent and Windsor-Essex, the engine of Ontario’s agricultural production, have two of the highest COVID-19 rates per capita in the province.

I walked through Cuijingo on my first evening there with Oscar, a silver-haired man who has come to Canada every year for most of his adult life—the second of three generations of his family who have relied on this kind of work.

As we walked, we bumped into Oscar’s friend, a thin man in a cowboy hat who would soon deploy to Canada. His voice cracked as he spoke with us. The prior season, his brother fell down the stairs of his bunkhouse near London, Ont. By the time he was rushed to the hospital, he was dead. As we stopped in on Oscar’s neighbours, more stories trickled out. There was Ricardo, who became a quadripelgic after a farm accident in Canada. Marcella’s husband got cancer. So did Alyssa’s. There is little data on illnesses migrant workers develop when they return home from Canada, but existing research from the US suggests farmworkers are at greater risk of a range of health problems due to chemical and pesticide exposure.

Mexican workers are by far the largest participants in SAWP: some 25,000 now travel north every year, a number that’s skyrocketed since the North American Free Trade Agreement. While the deal helped fuel factory jobs along the Mexico border, many rural farmers watched their domestic crops’ value become essentially worthless. Now, they’re tending ours instead.

They come on contracts of up to eight months, on tied work permits—which means their legal right to be in Canada is contracted directly to a job at a single employer. They come alone, usually with no grasp of English and little formal education, leaving behind a home that geo-politics have emptied of choice and opportunity. The SAWP contract guarantees workers some basics: minimum wage and employer-provided housing, but there is no path to permanent residency through the program, no matter how many years they participate in it. And what’s written in the contract doesn’t capture the power dynamics at play when workers arrive here.

Once in Canada, workers can be sent back back to Mexico for almost any reason, including if they get injured, complain to supervisors, or try to report health and safety infractions to authorities. Over the past decade, 5,500 Mexican migrant workers have been repatriated midway through their contract, sometimes against their will after a workplace injury or after speaking up about unsafe conditions. Sometimes, the Mexican government will place them at a different farm. But in one case, a worker told me several of his colleagues lost their spot on the program entirely after speaking up about living conditions at a bunkhouse in rural Ontario. I visited this bunkhouse myself, and counted more than 100 beds. Half of them were crammed in a dark, low-ceilinged basement with no washroom.

Early on in the pandemic, grassroots advocates like the Migrant Workers Alliance for Change issued a stark warning: this will be a catastrophe for migrant workers. At the time, I thought often about that 100-bed bunkhouse.

I’ve never seen another bunkhouse with over 100 occupants, but I’ve also never visited a migrant worker who has their own bedroom. While in Mexico, I got access to thousands of complaints made by migrant workers to the Mexican Ministry of Labour about Canadian farms. The single biggest concern was accomodation: overcrowding, living in converted garages or warehouses. Pest infestations were some of the most common complaints.

While Mexico has consular officials tasked specifically with handling migrant workers’ issues during the growing season in Canada, the complaints made when workers return to Mexico suggest inaction is common.

Bunkhouses are inspected by local health units before the growing season begins, and have to get a passing grade for employers to get approval to bring workers in. But things can look much different once those workers arrive and start sharing spaces meant for far fewer occupants.

Their limited choices at home and their precarious immigration status in Canada places them in what Western University law professor Michael Lynk calls a position of “extreme dependence” on their employers. For women, those power dynamics are even more complicated. A few years ago, the United Food and Commercial Workers Union slapped the Mexican government with a legal challenge over a policy that allowed Canadian employers to ask for workers of a specific gender (read: men). As a result, the Mexican authorities committed to ending the practice and increasing the number of women working in Canada, although there are still fewer than 1,000 female participants annually. But the risk, particularly of sexual abuse, can be significant.

I met Martina near Calpulalpan, a few hours north of Cuijingo; she’s part of this first wave of women who began coming to Canada. She decided to follow her four brothers to Canada after leaving an abusive marriage, and like the overwhelming majority of women who participate in the program, Martina is a single mother. When I visit her white-washed village in Mexico, she shows me a blackened part of her family home—a scar from when she says her ex tried to burn the house down after she left him. Her youngest daughter Natalia was conceived after she was assaulted walking home late one night from a local sewing factory.

Martina’s years in Canada have varied: she’s lived with six other women in her employer’s home, a boss she says was kind and supportive. On other farms, she’s worked 12 to 14 hours a day for an employer she said would scream slurs at women. She hopes to use the money she earns in Canada to send her daughter to culinary school.

Reading through the complaints made to the Mexican government, I found entries about sexual harassment too. One report about a B.C. orchard says that “six female workers were housed in a single room with bunk beds. The employer came in drunk, and initiated physical contact.”

The complaint said the same employer “shouted and insulted” workers constantly, and provided no transportation for basic necessities such as health care appointments and groceries.

As I reported, I saw this isolation first hand: last summer, I made plans to visit some workers I had met in Mexico when they arrived in Ontario. They’d been coming to the same farm for years, but had only the vaguest sense of where it was. I drove around Brant County looking for the landmarks they described until I found their bunkhouse, a small bungalow with a kitchen, bathroom, and one room that doubled as a living and sleeping space for eight workers. I imagined what would happen to them if there was an emergency that required a fire truck or ambulance.

Last year, the federal government created an escape route: it will now provide migrant workers who can prove abuse with an open work permit of up to a year, so they can find a job on a different farm. But once they do, they return to the old tied work permit regime: a temporary contract with a single employer.

Critics like MWAC say this does little to address the power dynamics that put workers at risk to begin with: how can workers advocate for themselves, when doing so puts them at risk not just of job loss but deportation, too?

Having spent time in migrant workers’ homes across Mexico, and in bunkhouses in rural Canada, I wonder what would have happened if migrant workers did not have to make that choice. If isolation and precarity were not features of our migrant worker program.

Would it have saved the lives of Bonifacio Eugenio Romero, Rogelio Muñoz Santos, and Juan Lopez Chaparro, who died of COVID-19, alone in Canada and away from their families?

I think of Cuijingo’s February festival, the last taste of home and family for many of the men—and women—who travel annually to Canada. Cowboys limber up for a heart-stopping rodeo held in an orange creamsicle-coloured amphitheatre. Dancers jive in elaborate costumes and face masks—a tradition that stems from Indigenous peoples, consigned to Spanish colonizers’ fields, poking fun at these strange, self-appointed overlords.

Each year, young men clamber up pyres loaded with fireworks to set them ablaze, to the delight of Cesar’s daughter, Perla. The intricacy of the display rivals any you can imagine: Aztec pyramids, flowers, and eagles explode into the night. Sometimes, the bursts of light depict a Canadian flag. And beside it, an airplane.