This Entrepreneur Is Installing Solar Power Projects In Oil Country 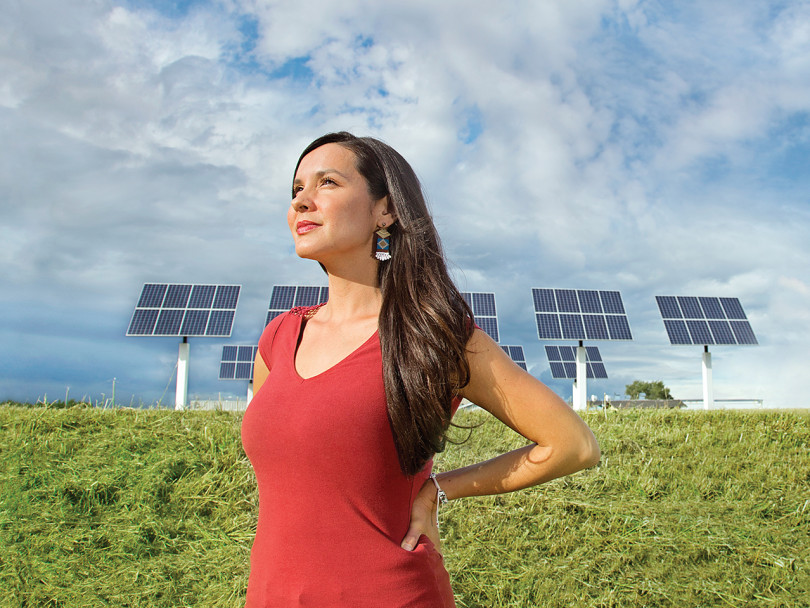 From Standing Rock to Trans Mountain, it is now, sadly, an all-too-familiar image: large groups of outraged, despondent Indigenous protestors united against yet another pipeline that threatens their land and water. But a story that gets a lot less exposure—and one that offers a lot more hope—is that of the dozens of Indigenous communities building alternatives to those pipelines.

In 2017, about one-fifth of the renewable energy projects in Canada were owned and operated by Indigenous communities, generating both clean power and jobs. This September, many of those projects will be the subject of a new 13-part documentary series called Power to the People, airing on the Aboriginal Peoples Television Network. The host of the series is Melina Laboucan-Massimo, a member of the Lubicon Cree First Nation, a former Greenpeace Canada climate campaigner and, most recently, a Climate Change Fellow at the David Suzuki Foundation.

If Laboucan-Massimo wasn’t hosting the show, she might well have been one of its stars. In 2011, her home community of Little Buffalo, Alta., already devastated by decades of resource extraction, was the site of a pipeline rupture and one of the largest oil spills in the province’s history. Four years later, as part of a master’s degree project in Indigenous governance at the University of Victoria, Laboucan-Massimo helped Little Buffalo build a 20.8-kilowatt solar installation to power the local health centre. Not only did it demonstrate to the community that renewable energy was accessible and could create employment but it was also both a way toward a sustainable future and a link to the past.

Lubicon Solar, the firm she formed to implement the project, has since solarized houses for the Tiny House Warriors, a group of activists who have built homes on the path of the proposed Trans Mountain pipeline expansion. “The way Indigenous people live in connection with Mother Earth is through reciprocity,” Laboucan-Massimo says. “Giving and taking, honour and respect. You don’t take more than you need. Renewables are a rejuvenative energy; they’re about respect and love for the land and ensuring that it’s passed on to future generations.”