Inside An Indigenous Beauty Pageant That Celebrates Sisterhood And Cultural Pride

For 47 years, the Oqnali’kiaq Princess Pageant in Eskasoni First Nation—a Mi’kmaw community on Cape Breton Island—has crowned the queen of Eskasoni. Here, a glimpse inside the 2020 competition. 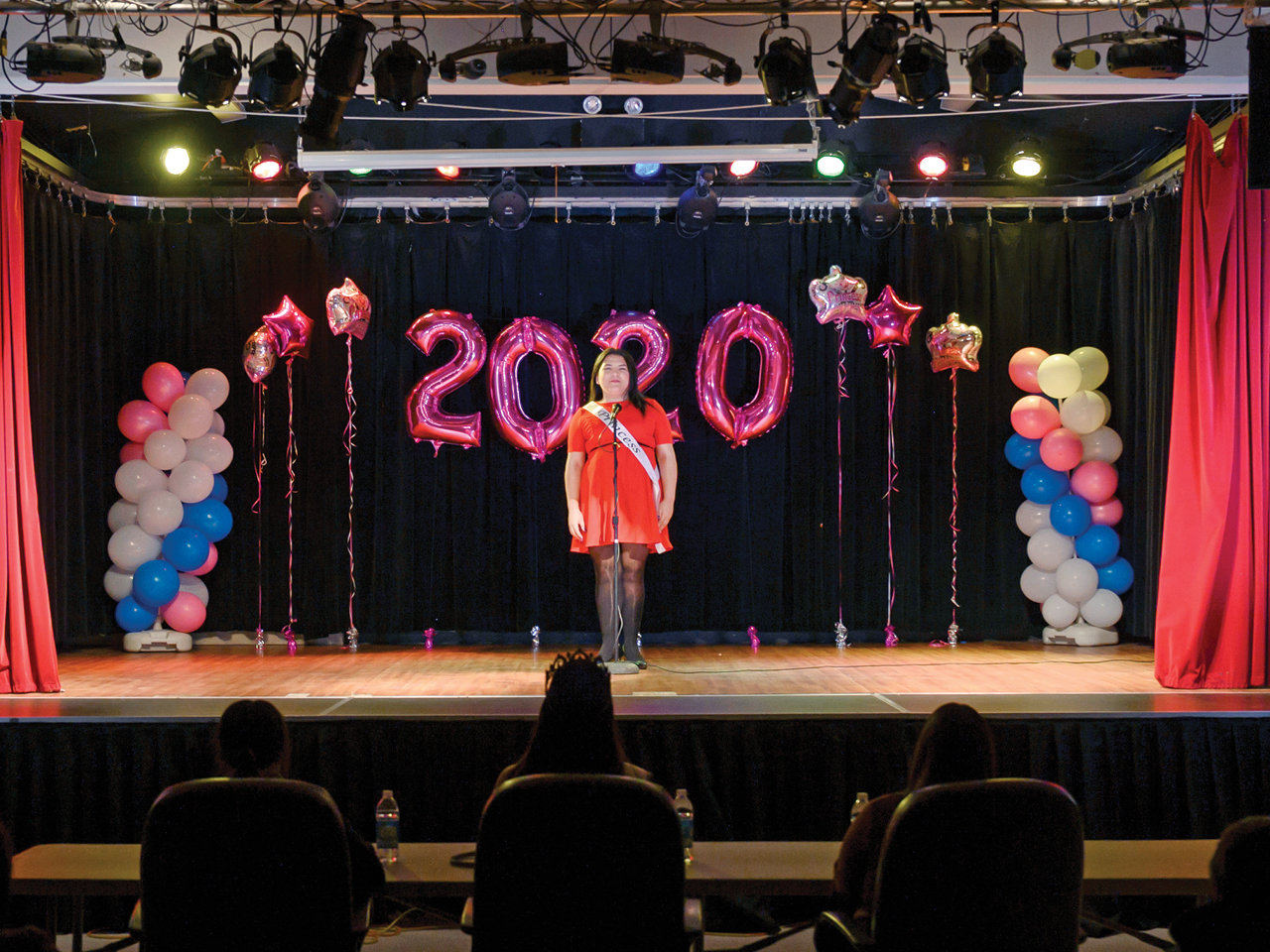 Bella Poulette, 19, is the first transgender contestant in the nearly 50-year history of the Princess Pageant. Here, she speaks to the judges about what it’s like to finally live as her authentic self. (Photo: Darren Calabrese)

In the hallway outside the tiny dressing room, Bella Poulette stewed silently as a friend swept matte brown eyeshadow over her lids. It was the second night of the Oqnali’kiaq Princess Pageant—the stressful talent portion at one of the most anticipated events of the year in Eskasoni First Nation, a Mi’kmaw community on Cape Breton Island, N.S. For 47 years, girls in Eskasoni have entered the pageant as a rite of passage to womanhood, and tonight, Bella, 19, was making history as the pageant’s first transgender competitor (or “princess”).

The three-night event was founded as a fundraiser for the local Roman Catholic parish, a religion that is engrained in the Mi’kmaq. And while pageants might conjure images of women judged on their looks, the people of Eskasoni see theirs as a showcase of female empowerment and cultural pride. As one mom tells me, the teens gain self-esteem, make friends for life and learn responsibility through committing to six-day-a-week practices. 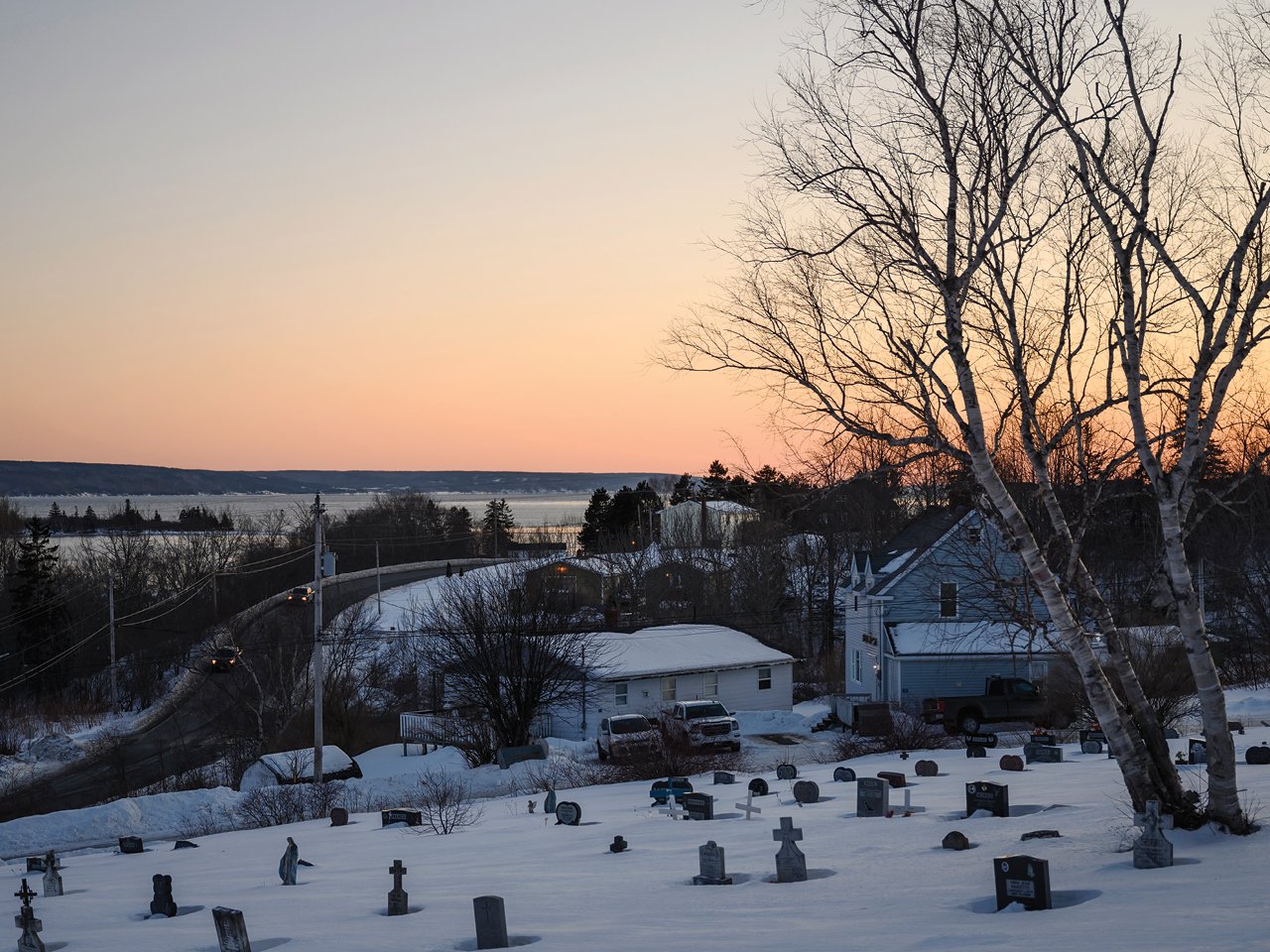 Bella peered in the mirror, excited yet worried. What if people booed her on stage? Also—darn it—the long royal blue nail on her left ring finger had broken.

Fifteen-year-old Alizabeth Jeddore was already sweating a little bit through her cousin’s regalia, a one-shouldered, midi shift with beading. She pulled out a tube of Fenty lipstick and reapplied the deep red colour. As a little girl, she’d stage-managed her two older sisters’ pageant debuts—adjusting the mike, pulling the curtain, fetching them water—and dreamed of the day it would be her turn. But now, it seemed the night was dragging.

Ainsley Denny, 15, was also on edge. Her mom and aunt had won queen, as had her three cousins. She’d been practising her speech for months—in the living room, in the car. Her family told her she was great, but would others think so? 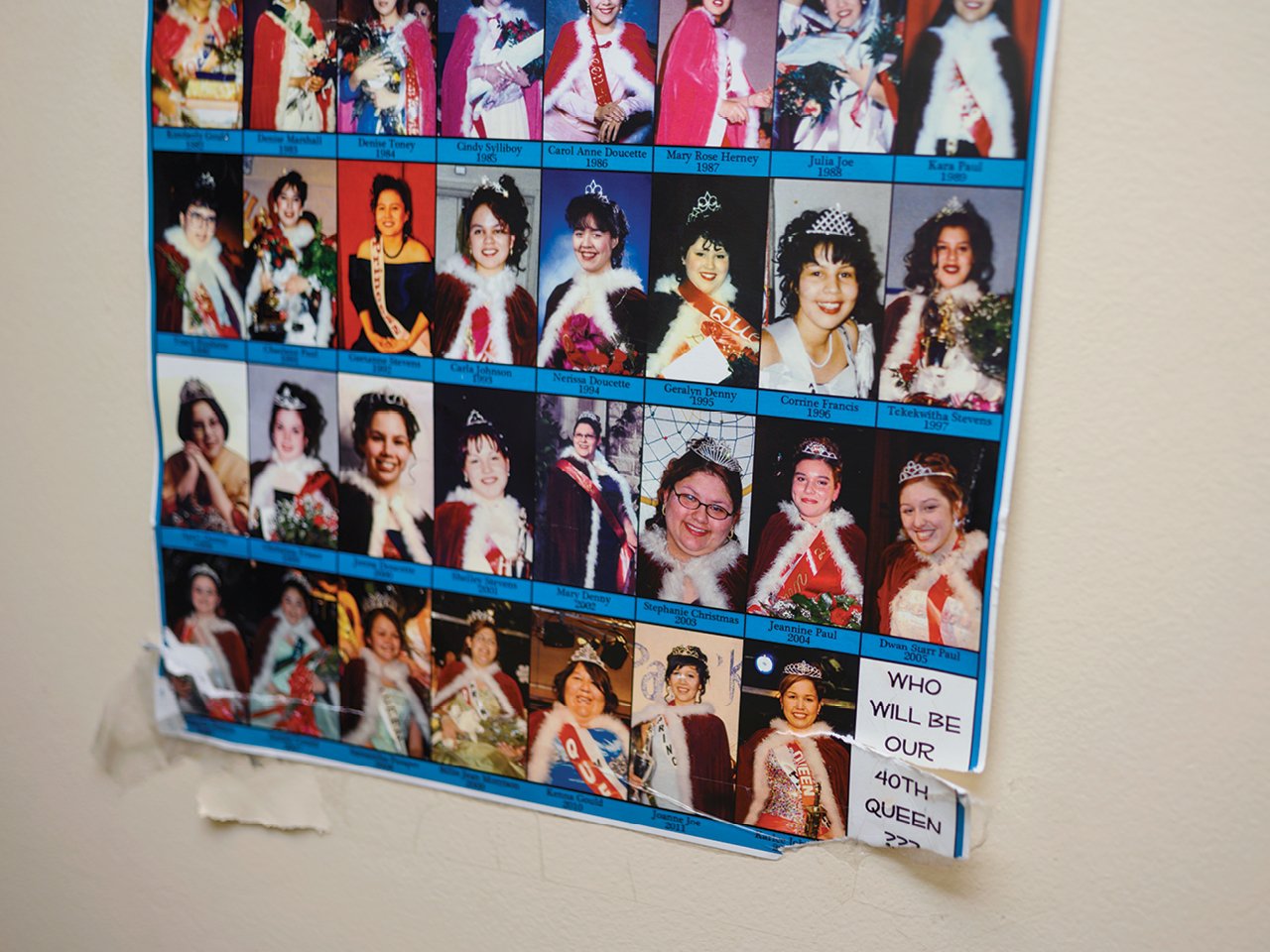 The sound of 200 people beyond the curtain suddenly made the prospect of performing real. Seventeen princesses bustled around the tiny backstage dressing room, dropping backpacks, shucking heels, hissing hairspray. Some ate poutine. Others scrolled through their phones. One princess, so tapped from all the prep, dozed on the tile floor.

“You got this,” one of the other girls whispered as Alizabeth walked on stage. In the front row, she spotted her parents and grandfather, Grand Chief kji-saqamaw Norman Sylliboy.

For her talent, Alizabeth performed the “Strong Woman Song.” Beside her, fellow princess Charity Lafford held a red dress, a symbol of missing and murdered Indigenous women and girls. The national epidemic has left no family in Eskasoni untouched. Alizabeth called for a moment of silence, and then, mimicking the sound of a heartbeat, she began to tap a deerskin drum. She chanted, slowly and mournfully in a girlish tenor that mesmerized the room. 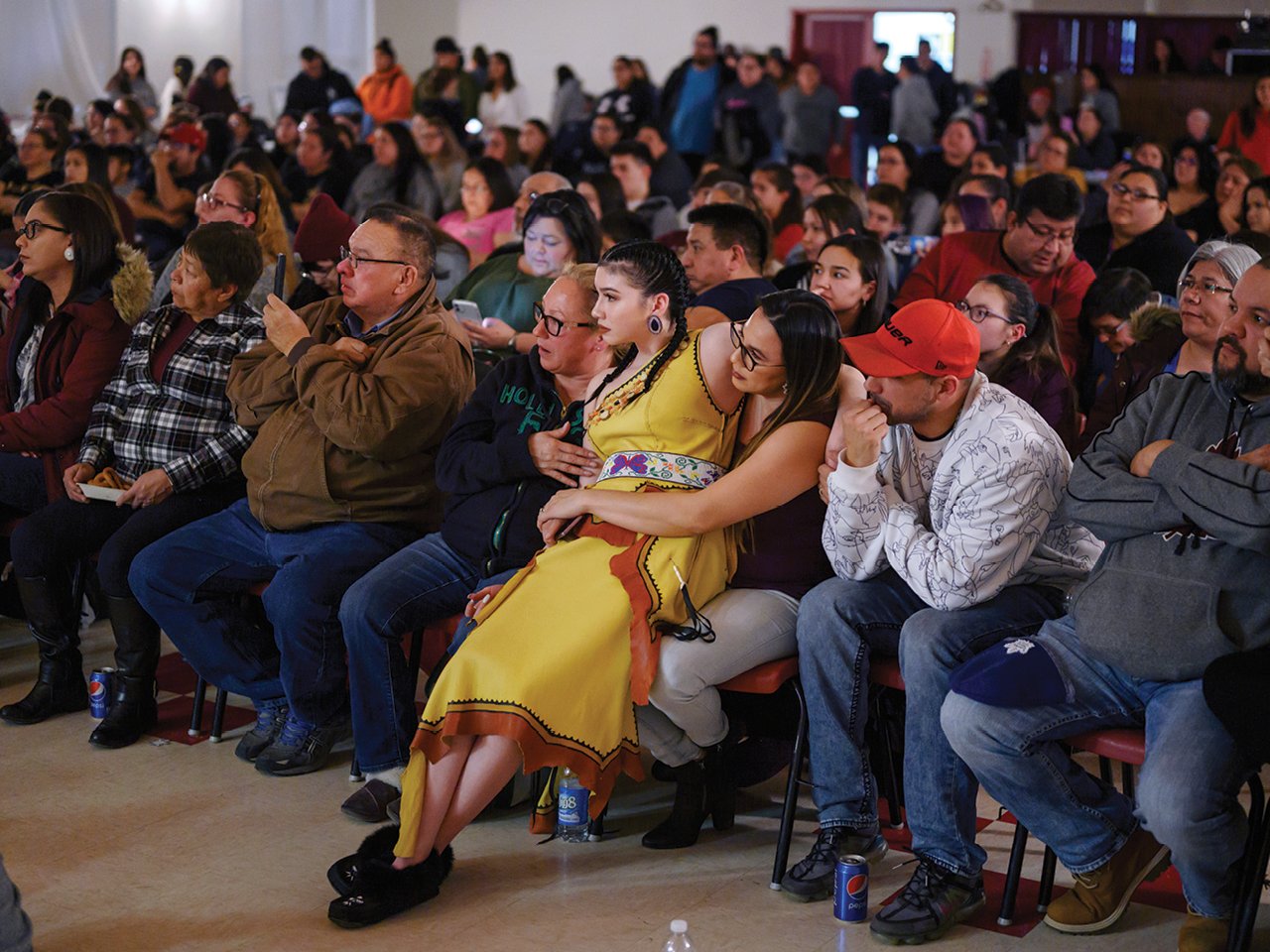 Alizabeth Jeddore, dressed in deerskin regalia, joins her family after her emotional performance of the traditional “Strong Woman Song” as a tribute to Canada’s missing and murdered Indigenous women and girls. (Photo: Darren Calabrese)

Eskasoni, derived from a Mi’kmaw word for “where the fir trees are plentiful,” was ground zero of racist centralization practices in Cape Breton. It’s where the federal government relocated Mi’kmaq people from all over the island starting in 1942, and failed to follow through on promises to create housing and jobs. Social problems like unemployment, addiction and violence worsened under the regime. For decades, Mi’kmaq children were sent to residential schools and Indian day schools, part of the federal government’s assimilation strategy to quash their culture and erase their language.

Today, with a growing population of more than 4,000, Eskasoni is the largest Mi’kmaw community in the world. While many elders still speak the language, hearing it spoken fluently by youth is rare. Ainsley is helping to change that.

The 15-year-old stepped onto the stage and described in both Mi’kmaw, her first language, and English how her culture and language are important to her identity. Through her, the language has prevailed despite colonialist assimilation practices forced on her people, she said.

In the audience, her paternal grandmother, Phyllis Denny—who was sent to residential school when she was five and spent eight years there—wept. Ainsley reminded Phyllis of her own mom, the prolific Mi’kmaw poet Rita Joe, a woman who was immensely proud of her culture, too.

Ainsley then showed a video of her sister, Kirsten, teaching the language to her three-year-old son, Tanner. “It is our responsibility to instill the importance of our language in the mind of our children,” she said, eliciting applause and cheers. 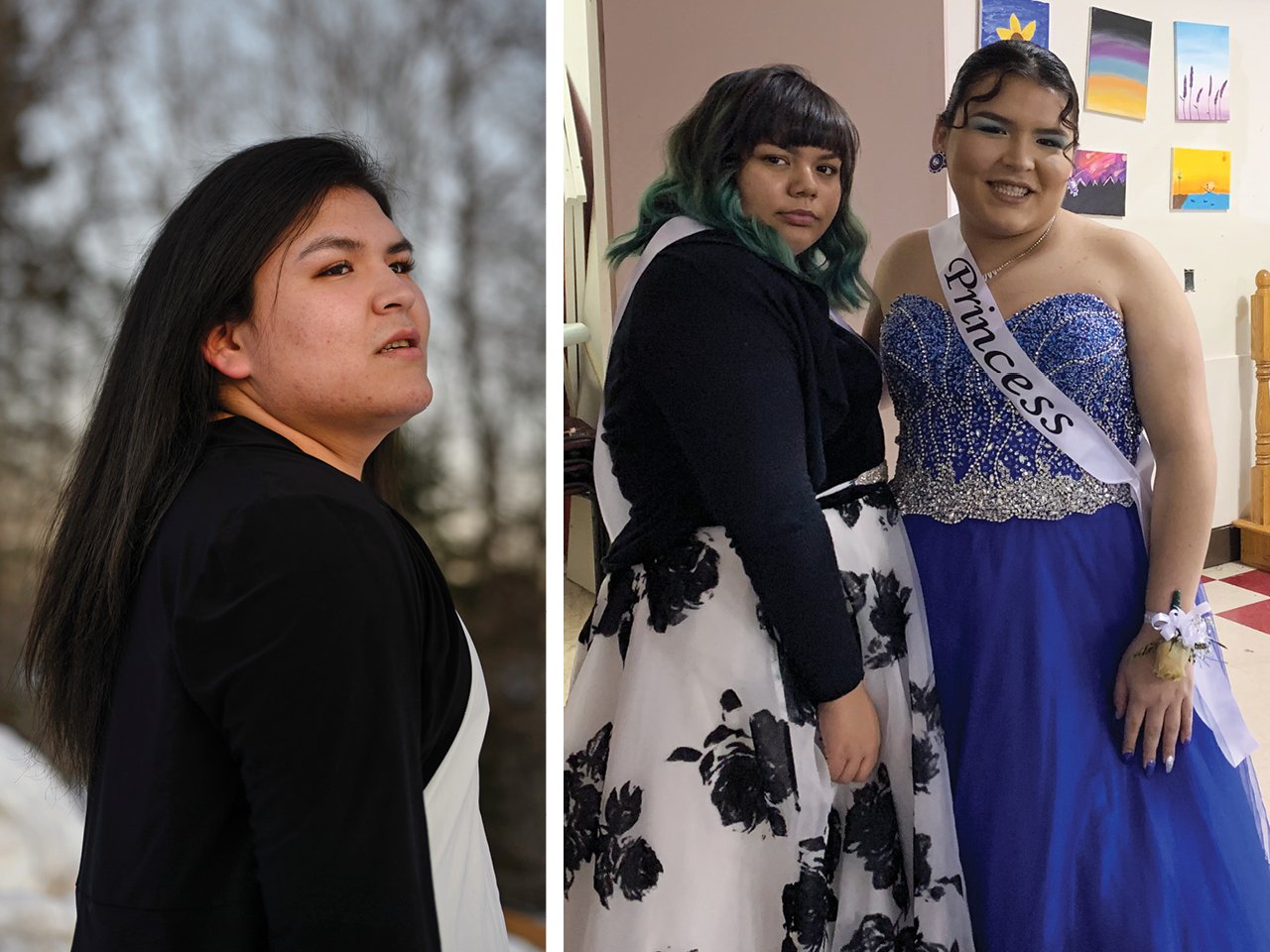 Soon it was Bella’s turn. There to support her was a full row of aunties, siblings, allies and a cousin, Abby Alex—who used to play Princess Pageant with Bella when they were kids.

At the mike, Bella spoke about her life under a dark cloud for 14 years. Of the pain and confusion of living in the wrong body. She tried to “fix” herself by joining boys’ sports teams and dating girls. But she only felt worse: angrier, lonelier and suicidal. Her friends—like Geordy Marshall, her sponsor from Pride Eskasoni—helped her get through it. They taught her forgotten, gender-fluid aspects of the Mi’kmaw culture, like how the language has no pronouns: You are human first. And also, the Mi’kmaw word, ki’l na ta’n wenin, which means you are who you are.

Bella also talked about the hate she saw on social media after pageant organizers announced transgender girls could enter the contest this year. It made her feel afraid of the vitriol someone might yell if she went for a walk, or worse. As a trans Mi’kmaw woman—part of a minority group within a minority group—she is exponentially more at risk of violence than her peers.

On stage, she was fearless. “For the first time in my life I am happy,” she told a loudly cheering crowd as her fellow contestants held up Pride and transgender Pride flags behind her. “I live on the outside as I feel inside.” 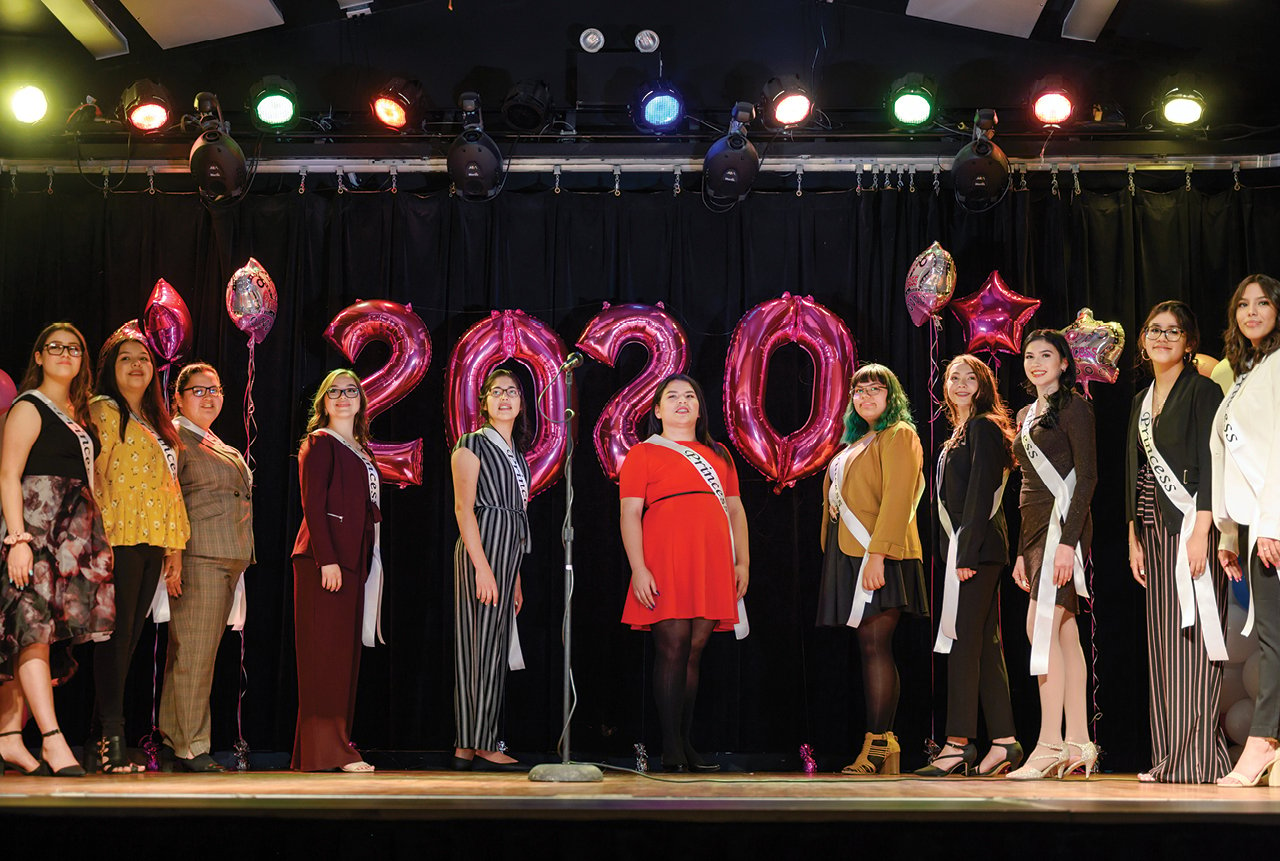 On the final, frigid night of the pageant, the girls arrived in the dark, one by one, in frothy bejewelled gowns. The one to be crowned queen would be recognized as such for the following year—she’d be invited to community gatherings and represent Eskasoni at the Mi’kmaw Summer Games.

The princesses and their escorts—teen boys in black suits, shiny shoes and boutonnieres—were introduced in front of a trio of judges and a packed auditorium, gifts were presented to sponsors and then finally, just before midnight, Ainsley, as her friends had good-naturedly predicted, was crowned queen. 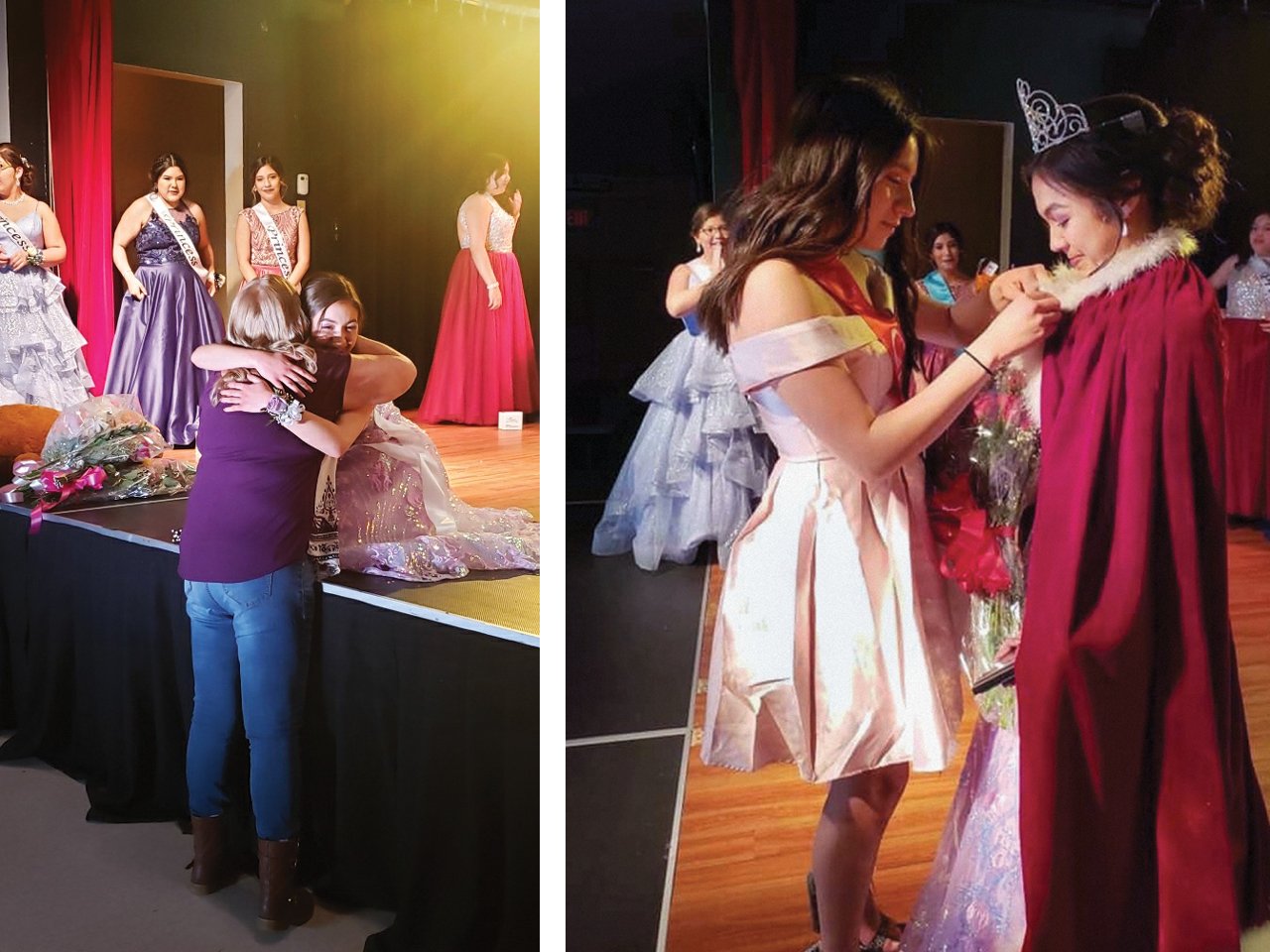 Tears streamed down her face as she bent to accept a rhinestone tiara and don the same feather-trimmed red cloak her mother had worn.

Soon after, Ainsley’s grandmother made her way to the stage. Ainsley, surprised to see the tears on her normally reserved grandmother’s face, cried harder.

“Mekite’tmul,” said Phyllis, as they embraced. I’m proud of you.