Mindy Kaling farts, and you should too

Farting is the last frontier of feminism and The Mindy Project is going there. 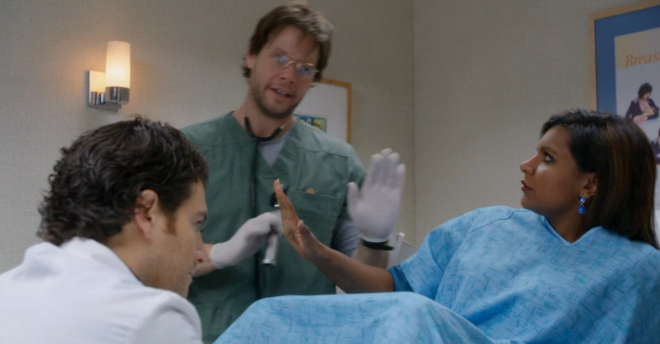 The setting for one of Mindy Kaling’s best fart jokes.

Here’s a list of things women are allowed to do in 2015: vote, divorce, hold property, earn a fair wage, raise children solo, use birth control, compete in the Olympics, hold political office, run a company . . . actually, I better stop. The list is almost endless and I haven’t got all day. Feminism, it works! But there’s one thing that, even now, women have no business doing—one final frontier that we have yet to conquer, something so shocking that we don’t dare to talk about it in polite company. Women can’t fart.

Yes, yes, I know we can fart. But we don’t. We won’t! We don’t want others to know when we’re twisty-stomached after a particularly spicy taco; god forbid we pollute the air with malodorous gasses on public transit; and we certainly don’t want to let one rip in front of our colleagues or friends. (I’m even slightly uncomfortable typing the word “fart.”) Unlike men, we are afraid of farting. But it’s time to let go of our fear, and Mindy Kaling is helping to show us how.

If you haven’t been following Kaling’s half-hour sitcom, The Mindy Project, open another tab on your computer or mobile device and start binge-watching immediately. Kaling, who you’ll recognize from The Office, produces, writes and stars in the show as Mindy Lahiri, a successful New York ob-gyn with a penchant for girly hair accessories, processed food and racial humour. (“Ethnic people slap each other all the time. It’s, like, half of reality television.”) And while much has been made of the fact that Kaling is a curvy Indian woman heading up her own show, what’s really groundbreaking is her willingness to unleash womankind’s long-silenced flatulence upon the world.

Mindy Lahiri farts a lot. In season 2, when the show is slowly building to the inevitable moment when Mindy and her fellow doctor and love interest Danny (Chris Messina) finally kiss, Mindy has to spend the night at Danny’s home. She snuggles up in his bed to confess something (her true feelings?) but instead of confessing her love, Mindy admits she farted earlier in the evening while they were watching a horror movie. “I did it because I was scared, and it was wrong and we should talk about it,” she says. Then she farts again.

Surely, it’s the first time a woman’s fart has broken sexual tension in a major network sitcom. (Spoiler alert: Mindy’s silent-but-deadlies do not stop Danny from falling for her.) But this is only Exhibit A of Kaling’s radical quest to normalize the female fart. Exhibit B: In a later episode, during an awkward interaction with an old boyfriend, rather than embarrass herself by stuttering or running into a door frame—as sitcom leading ladies do in such situations—Mindy refuses to show her discomfort, telling her ex that she feels “so comfortable, I actually just farted.” Exhibit C: After she’s given some dubious advice to her friend (a male ob-gyn) while sitting in the stirrups herself, she gives the excuse: “It was a pap smear. I was just focusing on not farting.” (“Not that focused,” replies nurse Morgan. “You still farted.”) Exhibit D: When Mindy enters her dark bedroom and accidentally sits on top of Danny, who is in the bed asleep, he cries out, “You sat on me!” She replies, “Yeah, and I farted on you too.” Exhibit E: In this week’s episode, when Danny’s teen sister is acting out at school, claiming to have emotional problems, Mindy calls B.S.: “Yeah, and I got out of chorus because of my uncontrollable farting.”

Kaling isn’t the first female comedian to embrace the fart. One of Kristen Wiig’s recurring Saturday Night Live characters was a seemingly sexy red-head named Shana, who, by the end of each sketch, has repulsed all but one of the male characters with her cartoonish emissions. (The joke here is seeing a pretty woman fart. The punchline is that there’s a man who’ll actually stick around.) But on The Mindy Project, a show with more jokes per minute than a lot of the competition, farts aren’t out of the ordinary or outlandish. Unlike Shana’s, Mindy’s toots sneak by almost without notice. When Mindy lets one go, her colleagues and boyfriends pay little attention, even when she points them out. And that’s the best part. Farts are normal, even for girls. And, sure, sometimes they’re smelly.