While our move is commonly called downsizing, I don’t think that’s what we did. Instead, I like to think we 'rightsized,' because our condo is our perfect fit. 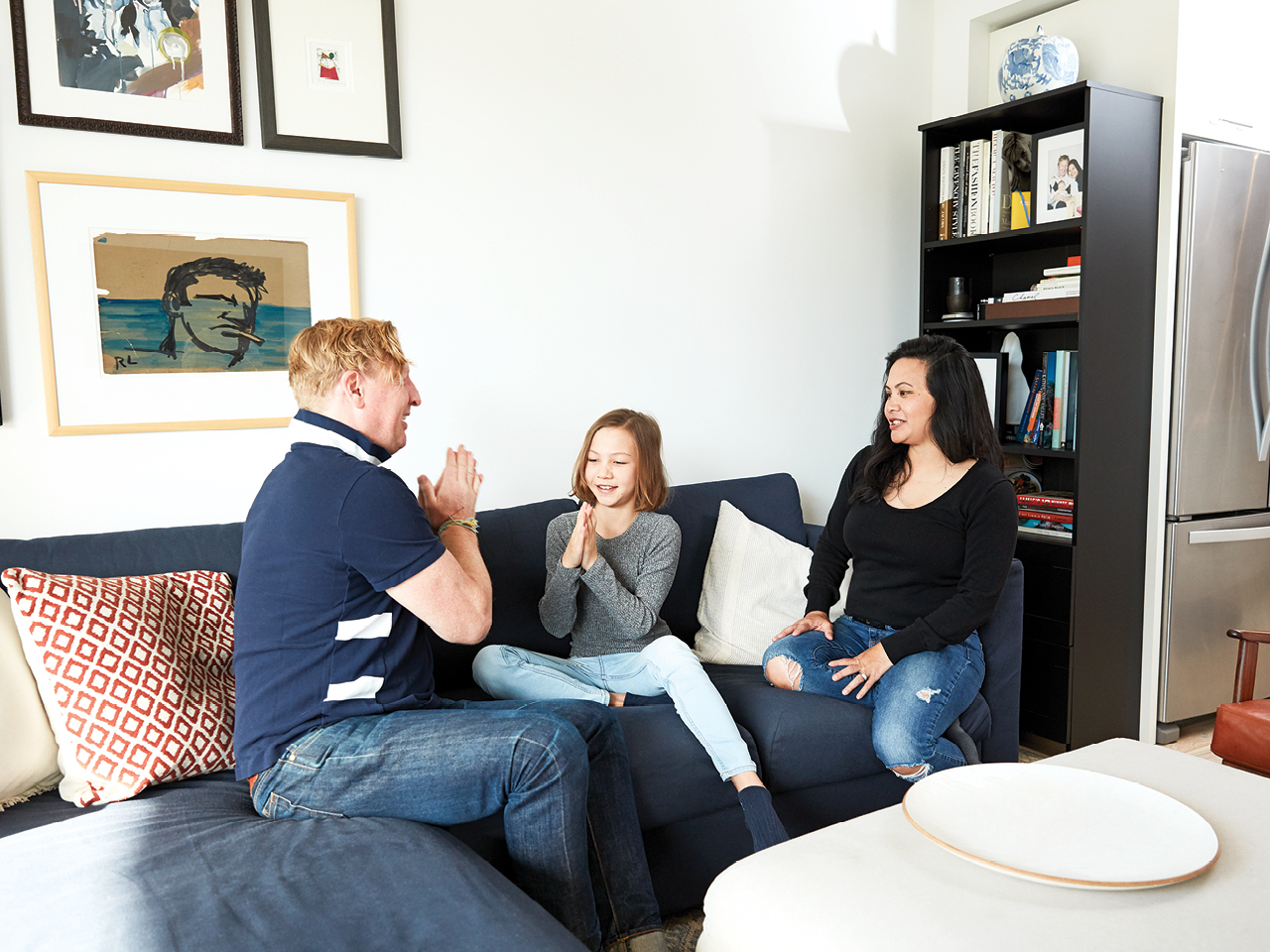 The no-fuss thrill and convenience of our white-walled condo makes us happier than keeping up a white picket fence. (Photo: Erik Putz)

My husband and I first saw our three-bedroom row house a few months after we got married. Like so many newlyweds, I thought it was time to take off the training wheels and sell our 780-square-foot condo for a grown-up house with a guest bedroom and a future nursery.

I’m not sure why I assumed marriage and having a baby equalled buying a house. Maybe it was a mix of seeing my family and friends follow this trajectory and the serotonin high of binge-watching HGTV. The channel’s prophetic path to happiness was simple: search, buy, renovate. We were even featured on one of the network’s shows. Our dated kitchen was transformed into a Scandinavian-inspired bistro with Marimekko curtains and black cabinets.

Even with its extra-wide doors that led to a huge deck, the kitchen wasn’t why we bought the house. What made us feel warm and fuzzy was the guest room, with a supersized window that overlooked a century-old oak tree in the backyard. It felt like the room hugged us as soon as we walked into it. During our tour, the realtor mentioned the house was formerly a pied-à-terre and the lyrical sound of those bons mots helped me envision its Pinterest-worthy potential.

We bought it in December 2007; just over our budget and on the eve of a financial slump. We were grateful, excited and nervous. I wasn’t sure we would live there forever, but I could easily picture first steps, sit-down meals and cat naps.

We moved in a couple of months later, during a February chill. On our first night, the heat wouldn’t turn on. Shivering and unsettled, we huddled up and slept on our mattress on the bedroom floor. The next morning, we hired a furnace virtuoso to flip a switch that was smack in the middle of the stairwell wall. It was impossible for anyone to miss—apparently—except for us. We immediately heard the quiet hum of the heat and he charged us $100 for his 15-minute visit.

I’m sure he laughed on his way home. 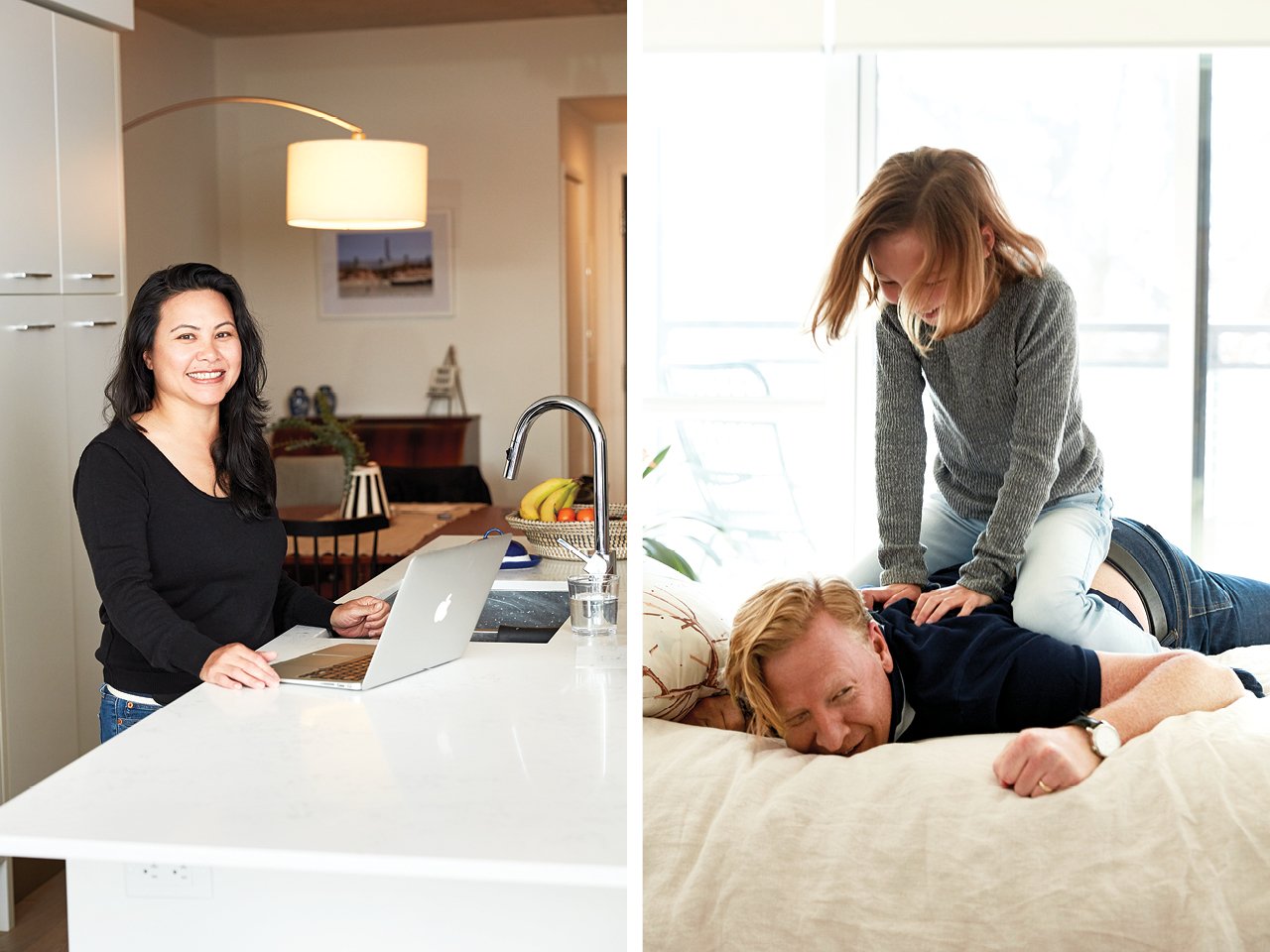 (Left) We don’t consider our condo’s maintenance fees a letdown. They’re easier to budget for than the unexpected repairs of an old house. (Right)Every square foot of our home is multi-functional—at times, the master bedroom even doubles as a wrestling ring. (Photos: Erik Putz)

In the years that followed, we often spent $100 or more to be someone’s punchline. Being handy isn’t in our DNA. My dad even bought us a literal Tool Set for Dummies. Every time we used a hammer or a screwdriver, the word “Dummies”—stamped in black on each yellow handle—stared back at us.

After the letdown of our first night in the house, we spent 10 years of saving and spending on a home we never completely loved. The house was financially and physically stressful to keep up, especially while we became parents and faced the cost of setting up a nursery (painted bright chartreuse to make up for a dark room with a small window) and full-time daycare.

Our hard-won salaries paid for a new roof, furnace and sewage replacements, kitchen and bathroom updates, a cedar-lined front porch, a French drain (an outdoor trench and pipe—not as posh as it sounds) and fresh bedroom carpeting. We pretty much did everything shy of a total overhaul.

Then it happened. Elevated six feet from the ground, the corner of our deck dropped almost a foot while we were hosting a barbecue. Our friends had to leap into the kitchen before the rotting wood caved in. What began as building a new deck turned into adding the French drain and other structural upgrades that cost upwards of $17,000. The contractor told us the clock was ticking on our air conditioner, too.

Tired of expecting the unexpected, I started craving the ease of a characterless, concrete box. Over breakfast, a few months after our new deck was completed, I found the courage to tell my husband I was ready for a change.

The memories made in our house, like our daughter’s first birthday and saying goodbye to our beloved old cat and welcoming a new one, weren’t enough to keep us from browsing neighbourhood condo developments just days after our conversation. A friend and real estate agent helped us consider the nitty-gritty: sunlight, street noise, move-in fees and the cost of upgrades. None of it scared us. Within two weeks, we bought a two-bedroom-plus-den suite with a 250-square-foot terrace. Sounds dreamy, right?

We certainly thought so. It would take a year and a half to build; nevertheless, once we signed the developer’s contract, we considered ourselves officially done with the house. Two months later, we listed it during a market upswing with plans to rent an apartment until our move-in date. Thankful to be able to afford a family-sized condo (at 1,234 square feet, it was roughly the same size as the first and second floors of our house), we sold at a market high and made an unexpected windfall that went toward a healthy down payment and negotiating a lower mortgage. We lucked out with a low-frills building (no pool, no security guard, no gym), and as a result, our monthly condo fees are less than the cost of keeping up the house.

We mostly got high-fives when we shared the news with family and friends, but some homeowners in our circle were stumped. How could we turn our backs on climbing the property ladder, especially in a city where square footage and a staircase are status symbols? Our parents, who survived World War II and thrived during the post-war boom, had always worked hard to maintain their houses, and found our decision especially confusing. At times, I felt spoiled and insensitive for trading our front porch, where we greeted a steady parade of superheroes every Halloween, for the convenience of a hallway garbage chute.

It’s now been over two years since we moved. We haven’t raked leaves or cleaned up garbage bins raided by raccoons—the same ones who used our majestic oak tree as their guest suite and our backyard as their outhouse. And during the morning rush, we no longer scrape snow and ice off our windshield because the car is tucked away in our underground garage. Our everyday life feels lighter. During Halloween, we hang out on our friend’s porch. 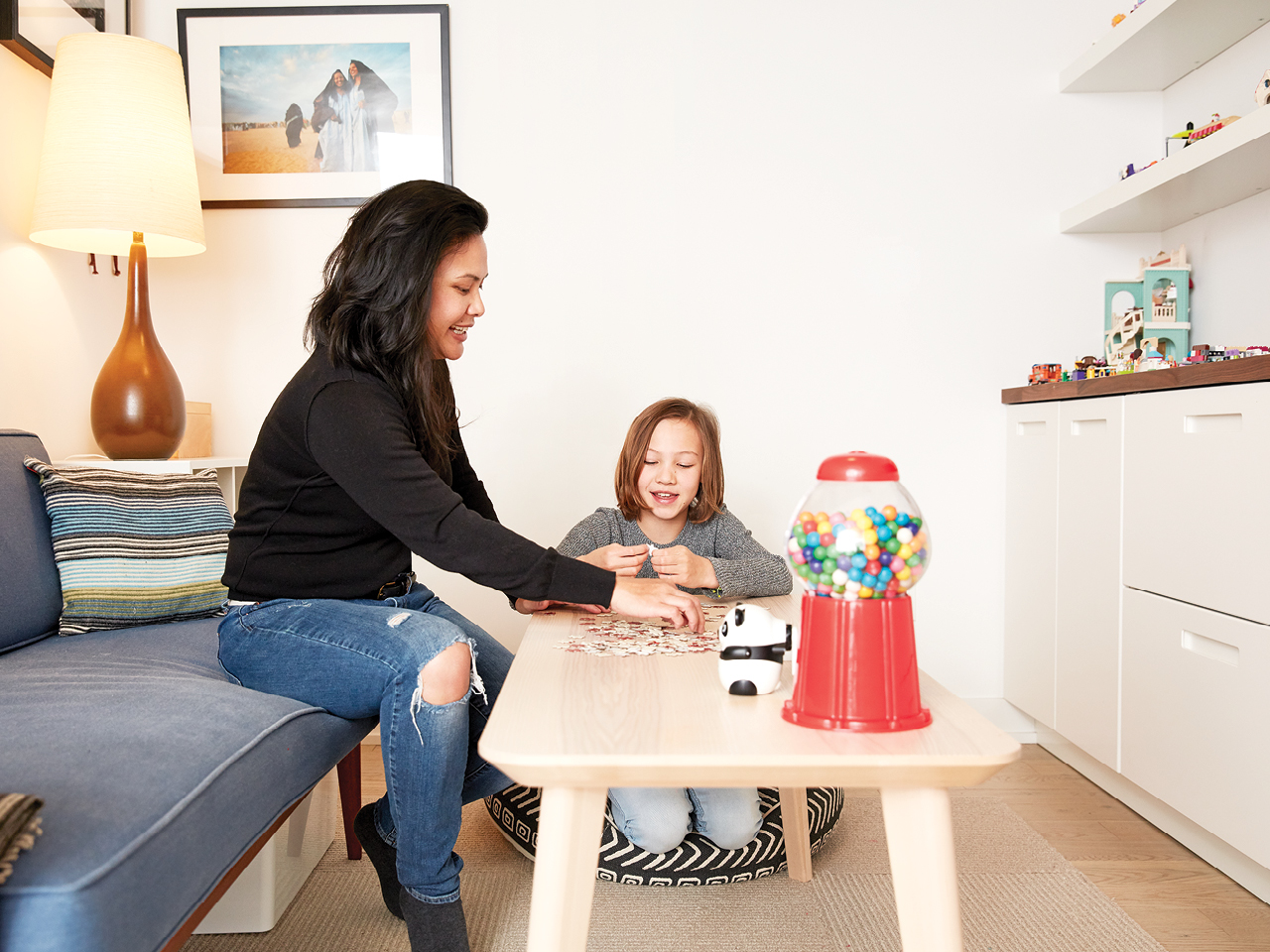 We happily traded our basement for a playroom-slash-den that never feels cold or damp. (Photo: Erik Putz)

On the balcony, my 11-year-old daughter grows tomatoes, green beans and basil a safe distance from squirrels. And despite the much-blogged idea that kids need a backyard for psychological stability, she is happy, well-adjusted and lucky to be surrounded by parks, a Great Lake and a city heaving with things to do beyond our condo’s white walls.

I’m confident she doesn’t need stairs or the average size of a Canadian home—which is around 2,000 square feet—to grow up in. Case in point: Over 60 percent of Switzerland’s population live in apartments and it’s ranked as one of the happiest countries in the world. And after following 32 middle-class families in Los Angeles over four years, the Center on the Everyday Lives of Families at the University of California reported 68 percent of each family’s time was spent in the family room and kitchen. Their results also showed little activity in the formal living room, dining room or porch (except, I’m assuming, during Halloween).

The blank slate of moving into a crisp new condo also lowered my design anxiety because I don’t have to fuss over fitting crown moulding on uneven walls or trying to shoehorn my modern impulses into a traditional space. In place of Victorian charm, the character of our condo simply comes from our personalities and our cat, along with a few mid-century investment pieces that we’ve collected over the years.

The only serious hiccup has been learning to live with less storage. After we sold our house, we reluctantly pared down our furniture to our vintage must-haves along with reliable essentials from Ikea. I also uncoupled with consumerism because I have no room for stockpiling impulse buys.

While our move from house to condo is commonly called downsizing, I don’t think that’s what we did. Instead, I like to think we “rightsized,” because our condo is our perfect fit. It’s more comfortable for us than our house ever was, even when my daughter’s friends are over and we hear their high-pitched squeals only a few feet away. We’ve learned to welcome their tween-age chaos, and while she’s still within arm’s reach, we’re embracing the chance to watch her life unfold in our close-knit quarters.