Harry, Meghan And Me: What This Royal Moment Could Mean For Indigenous People

Queen Victoria was so tight with the Mohawk that they adopted her (maybe). Today's Crown-Indigenous relationship is terrible, but the Sussexes could choose to help. 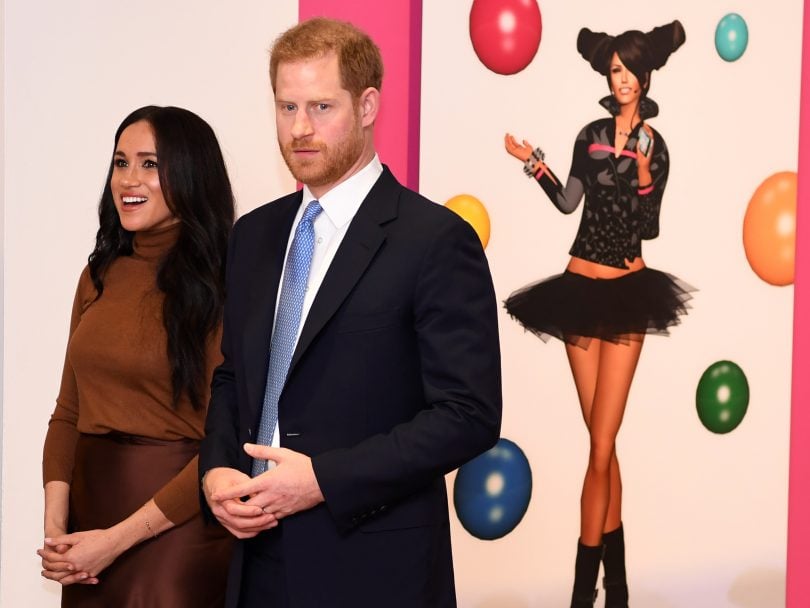 Prince Harry, Duke of Sussex and Meghan, Duchess of Sussex at an exhibition of art by artist Skawennati, of Kahnawake Mohawk Territory, in the Canada Gallery during their visit to Canada House. (Photo by DANIEL LEAL-OLIVAS - WPA Pool/Getty Images)

It’s not hard to understand why the Duke and Duchess of Sussex yearn for a life free from their family. Being part of the British monarchy, and all that comes with it, seems like more trouble than it’s worth–“uneasy lies the head that wears a crown,” or whatever Shakespeare said.

But what exactly is the Crown? Well, it can be many things. Depending on which part of the colonized world you happen to be in, it could be your head of state and sovereign. It might also be a treaty partner, an opaque concept in Canadian law, and the authority behind the RCMP as its officers beat and starve your kin and attempt to evict them from their homelands. Somehow, it’s also a compelling family soap opera worthy of a Netflix binge. Oh, and a literal thing you put on your head.

While it might be easy to assume that all Indigenous people hold a justifiable resentment towards the monarchy, the reality is more complicated. I’m a Kanien’keha:ka woman who grew up in my territory, connected to my community, language, and ceremonies. But I also grew up exposed to a mainstream Canadian media that peddles colonial fictions, like that this is a safe, equal place for everyone, including Indigenous women (it isn’t). As well, Princes William and Harry are only a few years older than me. I was 10 when their mother died and I remember, in vivid detail, all the sadness that followed. It was impossible not to feel sympathy.

But now we’re all adults, realizing what the generations before us were up to. Harry and Meghan’s decision to leave the formal role of being Royal has provoked a conversation about what the Crown represents, who it serves and what it will be in the future. It’s a conversation that is sorely needed. To be at all meaningful, that exploration must consider my people’s right to exist as a sovereign nation, and the relationship that has existed between us and the Crown for centuries. It’s a history that is complex–and, frankly, not well remembered.

The Kanien’keha:ka, or Mohawk, are one of six nations that form the Haudenosaunee Confederacy. This confederacy of Mohawks, Oneidas, Onondagas, Cayugas, Senecas, and later, the Tuscaroras, is one of the first and longest lasting participatory democracies in the world. You may know us as the League of Nations, a name from the English, or the Iroquois Confederacy, a name from the French. Our shared territorial boundaries have morphed over time and extend throughout Ontario, Quebec, New York State, Wisconsin, Oklahoma, Pennsylvania and Ohio.

While most people have 1492 imprinted into their minds as the first contact between Indigenous peoples and settlers, Haudenosaunee relationships with Europeans emerged around 1603. The Haudenosaunee first entered treaty with Dutch settlers in 1613. Known as the Guswentah or the Two Row Wampum belt this agreement set out legal principles of non-interference between nations. The Haudenosaunee canoe and the settler ship are represented by parallel purple lines with three rows of white beads between them, travelling down the river of life together at the same pace, separate but equal.

From the earliest points of contact, Haudenosaunee forged alliances and treaties with Europeans, agreements which have protected our interests, culture, worldview and ceremonies into modern times. The wisdom of our agreements has been borrowed by other nations with their own aspirations of sovereignty and even today, discussions around Crown-Indigenous relations often refer back to age-old Haudenosaunee ideas.

In 1664, when Britain took over the stretch of the east coast known as New Netherlands from the Dutch, a subsequent agreement was formed on similar principles. Called the Covenant Chain, a metaphorical three-link silver chain representing peace, friendship and respect, that treaty between the Haudenosaunee and British was to last as long as the sun shines, the waters flow, and the grass grows green.

Through the Beaver Wars, the War of 1812, and the First and Second World Wars, the Haudenosaunee, as a sovereign people, fought alongside their allies, the British. Relationships with the Haudenosaunee–particularly the Mohawk–provided the security that was necessary to establish, and shape the British colony that became Canada. This historic relationship, built on mutual respect, has fed into long-standing rumours that Queen Victoria was once adopted by the Haudenosaunee.

My community of Six Nations marks this centuries-old relationship every May two-four weekend: we’re some of the few people in the country who acknowledge the holiday as the birthday of Queen Victoria. Known as Bread and Cheese Day, our quirky celebration includes those namesake foods as a symbol of the gifts given to the nation by Victoria. There are also fireworks and even a parade (note: this isn’t an invitation).

So, is Queen Victoria Mohawk?

I recently sat in as a group of grade four students were shown the generations-old Two Row Wampum belt, in it’s worn but recognizable form. The belt is cared for by the Confederacy, an important reminder that old agreements are not forgotten. The next generation of Haudenosaunee kids were told, “This is your inheritance. This is your history. It belongs to all of you.” For over 400 years, the Haudenosaunee have been actively advancing our rights and interests on our own terms, and we intend to continue doing so.

The relationship between our nations has no doubt eroded. Over those centuries, the Crown has shifted from a single ruler to elected officials forming governments that serve on behalf of the monarch. The relationship to Indigenous people has also shifted, and not for the better. At this point in history, the Canadian state maintains its existence at the expense of Indigenous people. Its structure actually requires our erasure, in order to legitimize its control over lands and resources. Certainly no contemporary monarchs are worthy of adoption, unlike Queen Victoria.

As colonialism continues its hostile attempts to stifle us, Indigenous people continue to adapt, quickly, doing everything we can to survive. We’ve made camps and freedom schools to protect our languages and customs. We have formed blockades to prevent destruction of our homelands, as well as organizations and alliances between Indigenous people across Canada, and internationally. We adopt new technologies and build solidarity networks via social media.

We are still here.

But it’s definitely been exhausting. So I get why Meghan and Harry sounded so desperate when they spoke about the need for modernity on the part of the Crown. Especially since, for them, the Crown’s form is more immediate, and their desire to transform it deeply personal.  Perhaps unsurprisingly, the family would rather see Meghan and Harry withdraw from royal duties than nurture a new, dynamic future within the institution.

Which presents the Sussexes with a decision. Like many other settlers seeking a new life in Canada, Meghan and Harry might choose to blithely make their home on stolen native land–in B.C. no less, the majority of which is unceded First Nations territory, as the coast-to-coast actions over what’s happening on Wet’suwet’en land right now are drawing attention to. Or, they could take the opportunity to honour Britain’s age-old agreements with the Haudenosaunee, and other Indigenous people.

I don’t speak for all Haudenosaunee, and at this point, Harry and Meghan don’t speak for the British Crown. Nonetheless, this is a significant moment, one that offers a chance to imagine new ways of relating to one another. For all settlers, that begins with facing the colonial legacy of racism and inhumanity that is inseparable from what Canada is today. For such high-profile settlers, it means voicing respect for Indigenous rights and title and consideration for whose land they are on. Having shed the Crown and come to Canada, Harry and Meghan should do their part to create a future where Indigenous peoples’ suffering is no longer a consequence of settler success.