Meet 5 Women Who Sew Their Own Clothes

"Sewing offers me the freedom to dress exactly how I want."

Driven by a decline in the quality of store-bought clothing combined with a proliferation of online tutorials (and some pandemic-induced spare time), more and more Canadians have recently learned how to sew—and in the process, they’ve achieved total autonomy over how they dress. “It hasn’t always been easy to find clothing that fits, and when I do, it’s not necessarily the style I like to wear,” says Susan Quann, who was born with spondyloepiphyseal dysplasia, a rare form of dwarfism. “It was a huge relief for me when I realized that I could create clothing that was a perfect fit.” Read on for more from Quann and four other Canadians who picked up a needle and thread during the pandemic—and still haven’t put them down. 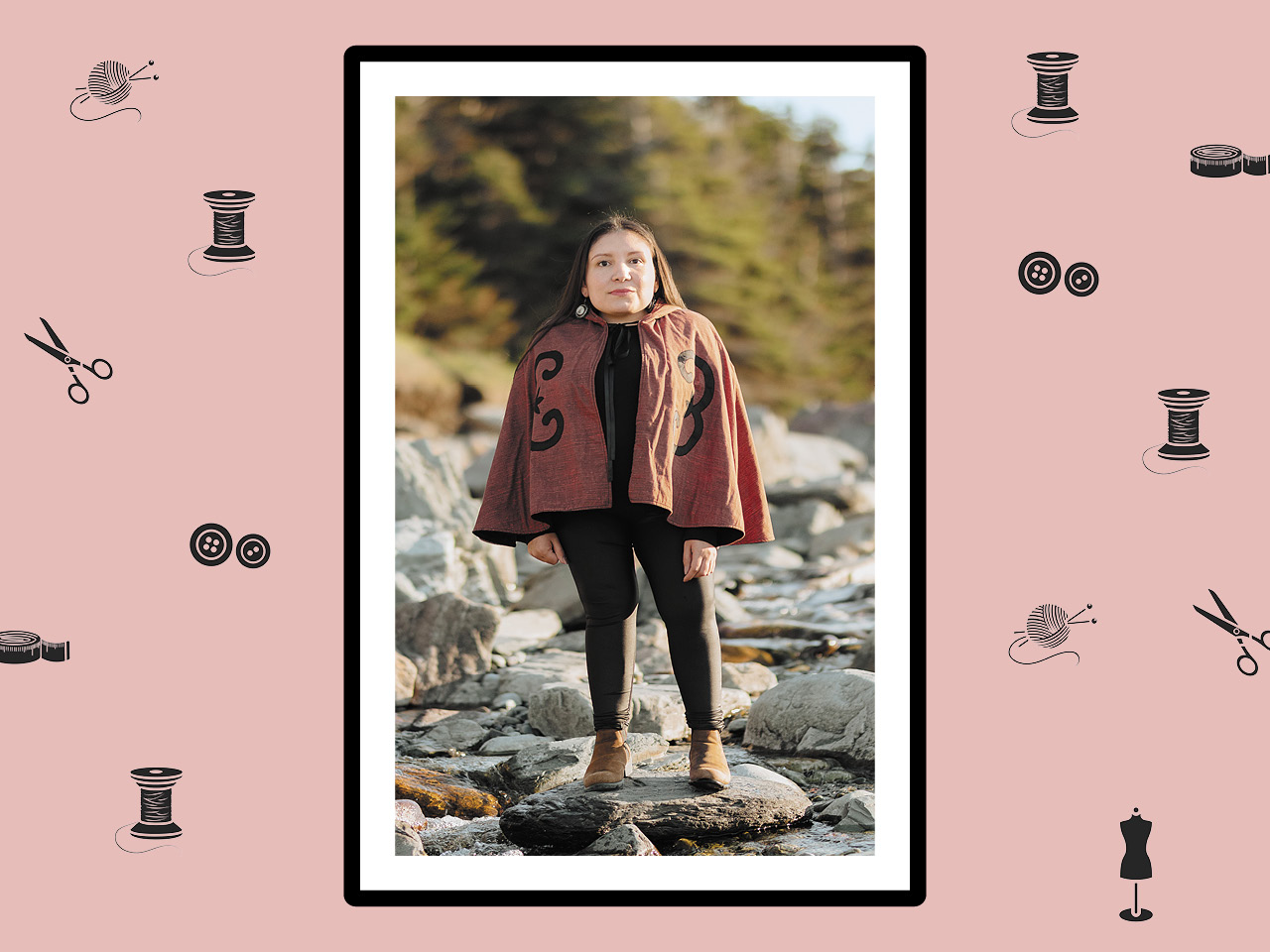 “This cape was the first piece I made that mixed modern and traditional elements.” (Photo, Lindsay J. Ralph. Illustrations, iStock.)

When my son was born in 2018 with the same type of dwarfism I have, I decided to learn how to sew. I wanted him to wear whatever clothing he liked—a luxury I didn’t have.

My husband’s grandmother, a long-time seamstress, gave me a crash course, and then I started watching YouTube videos and joined a bunch of Facebook sewing groups.

I’m Indigenous—Mi’kmaw and Tuscarora—and in my community, we don’t have a lot of powwow regalia makers anymore. When my son was four months old, I decided to make him a regalia, so I spoke to my Elders about it. Then I laid my baby down on the fabric and traced his body to make a regalia that fit him beautifully.

I didn’t start sewing for myself until the pandemic. But finding a pattern that fits my body is about as difficult as finding clothes. Eventually, I found a blog post from a company called Ellie and Mac on how to alter patterns. I bought one of their patterns for a pair of pants, hacked it apart and put it back together. It turned out really well.

As I started to make more clothing for myself, I posted pictures of it on Instagram and TikTok, and companies began asking me to test their patterns—a great opportunity to create a little more visibility for people with different body types. And in June, I started my business, Eli’sawey, making regalia and traditional Indigenous garments.
Recently, my son asked me if he could learn how to sew. He’ll pull out a fabric from my pile and say, “Mom, you need to make this.” 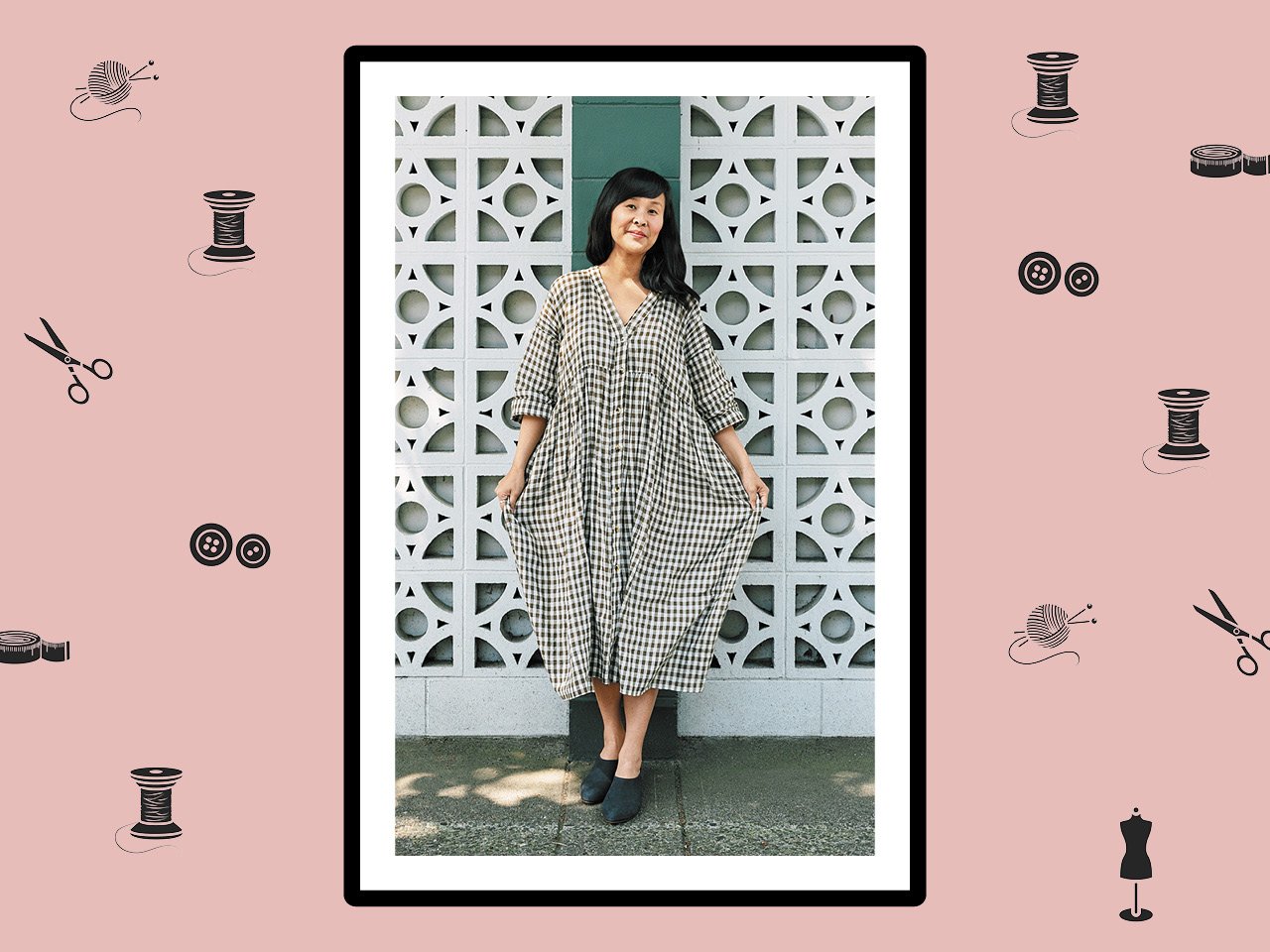 “Every time I put on this dress, I remember the tenderness of the time when I was making it—during the first two months of my daughter’s life, stitches sewn during baby naps.”  (Photo, Felicia Chang. Illustrations, iStock.)

When I had my first baby in 2017, my body changed—rightly so, after having housed a child—and I needed to restart my wardrobe. I found myself drawn to slow fashion because paying workers a fair wage and being mindful about consumption are very important to me. I ended up finding a whole community on Instagram whose values were similar to mine. Eventually, it seemed like everyone in the community started learning how to sew.

At first, I was very envious. I would look at the garments they were making and think, “I could never do that.” My only exposure to sewing at that point was a single home economics class, which I was very bad at. But in May 2020, a relative offered up her sewing machine, so I figured I would just try. I started out making a pair of baby pants. When I completed them, I felt like I had finished my master’s degree again. Once I conquered baby pants, I made a pair of Anna Allen’s Pomona pants, which broke my brain a little. I’m not really a spatial thinker. But I was hooked on that sense of accomplishment.

Through sewing, I’ve learned that clothing should cost way more money. There’s no magical machine out there pumping out $10 T-shirts. There’s a person behind every item who has done all that work. Sewing has given me an identity outside of parenting, being in a partnership or my work. Mothering is a huge undertaking, and without sewing, I would feel a sense of being unmoored. It is truly my own, and I think that’s important. 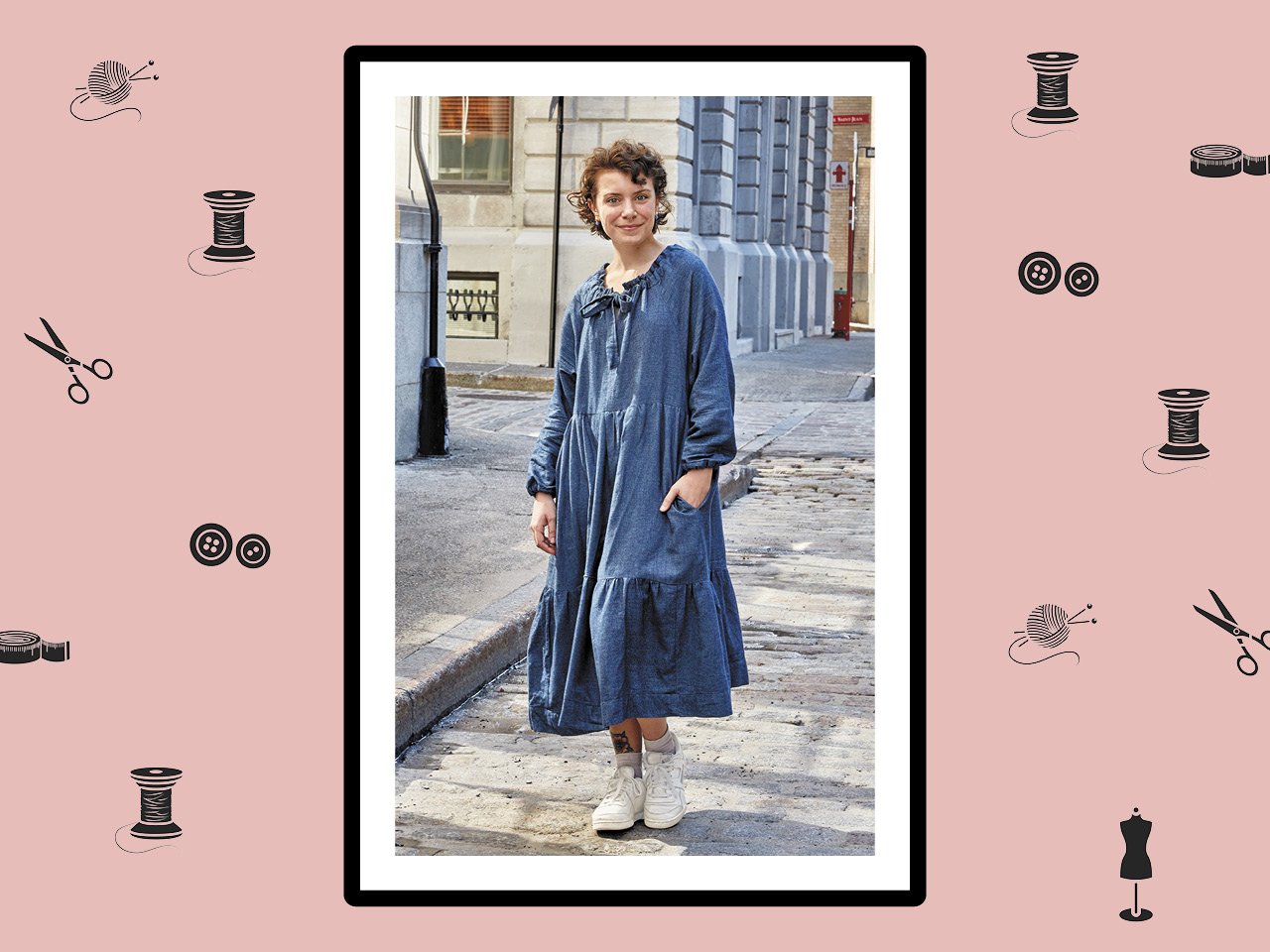 “This fabric looks like denim, but it’s actually super soft chambray. I never would have bought something like this dress before, but I love it.” (Photo, Christie Vuong. Illustrations, iStock.)

I was laid off from my marketing job pretty much as soon as the pandemic started. I didn’t know what to do with myself. Initially, I got into sewing because I envisioned it as a more sustainable relationship with consumption—I wanted to learn how to alter my clothes and do thrift flips (turning thrifted finds with awesome fabrics into something else). I borrowed a sewing machine and taught myself through YouTube videos. It became a soothing practice, something to pour myself into when everything was so chaotic.

One of the first things I made was a pair of overalls, which was tricky, but when you think about it, sewing is just following a lot of steps. I glow with pride every time I wear them. They’re now falling apart—I didn’t know how to properly finish seams when I made them—but I’ve been mending them as I go because I really cherish them.

The moment you start a project is filled with so much possibility. The first few steps are always pretty easy, and you feel invincible. Then you have to do something complicated, like a zipper, and it all comes crashing down. My style of sewing is very slow and intentional.

Before I start a project, I take a step back and think about what I want to bring into my wardrobe. It’s really made my style come together more cohesively. This sounds dramatic, but sewing changed the trajectory of my life. After I was laid off, I realized how depressed I had been working in marketing. Slowly, I’ve been making sewing as much a part of my everyday life as I can. 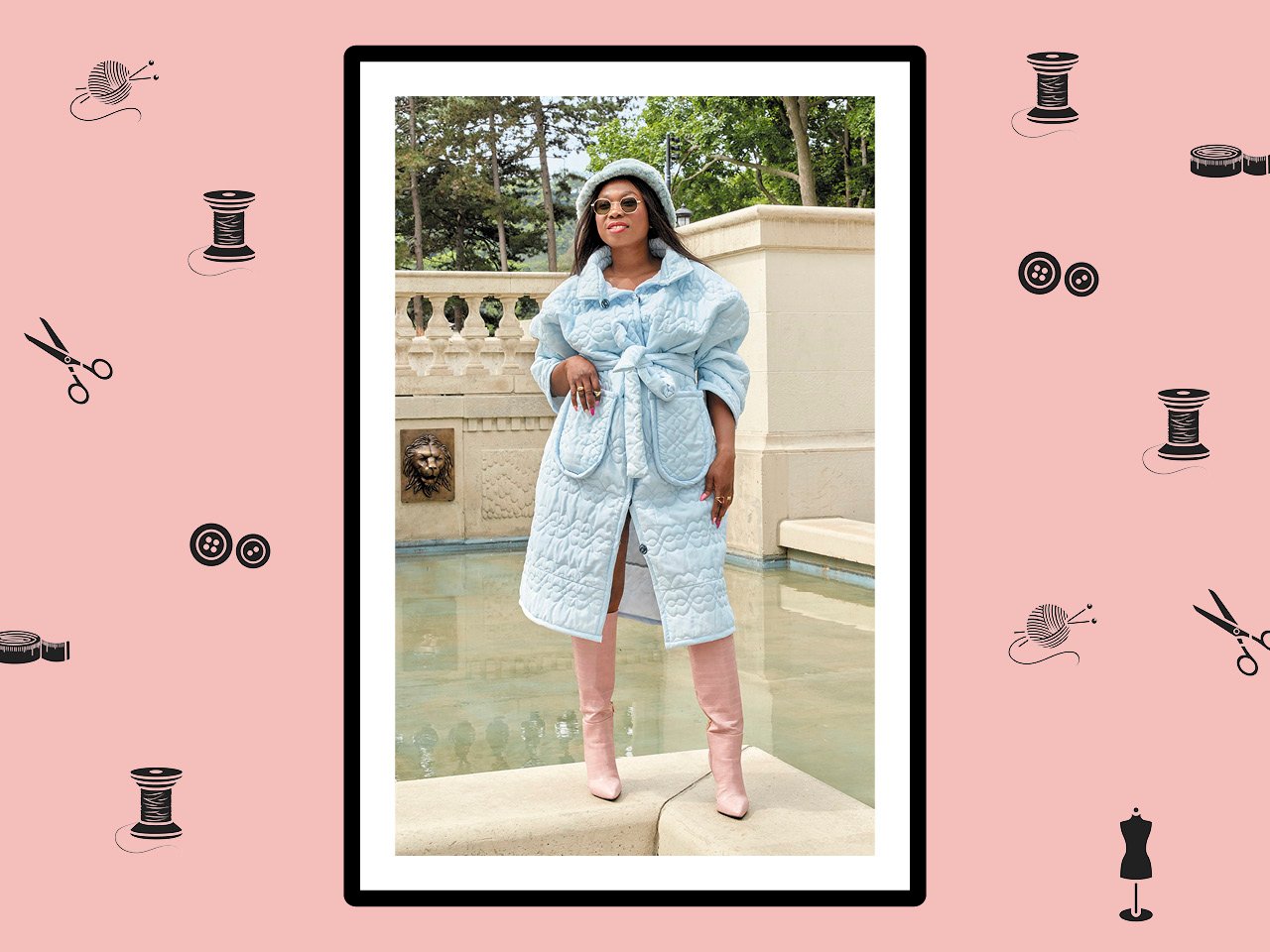 “I love that I was able to transform a quilted blanket into this fun fall jacket.” (Photo: Christie Vuong. Illustrations: iStock.)

I taught myself how to sew in 2019 because I’m drawn to unique items, like blazer dresses and extra-baggy pants, that I have a difficult time finding in stores. In order to wear exactly what I wanted, I had to learn how to make it. I taught myself by going on YouTube and watching videos of people sewing and went from there. I also make my own patterns. To do this, I had to draft a body block [a basic pattern template]. For each garment that I want to make, I start out with the block and adapt a pattern from there.

In January 2021, I lost my job as an office manager and had a lot of free time, which is when I decided to take sewing a bit more seriously. Now when I want to make something new, first I make it in a fabric I don’t care about, in case it turns out to be rubbish. If it turns out okay, then I’ll make it in the good fabric.

In June 2021, I started my own YouTube channel and posted videos featuring my various sewing projects. I figured I would just upload some videos and start making money. It didn’t quite work out that way, but my DMs are full of people asking, “When are you going to make outfits for us to buy?” I usually turn them down. Even though I love making outfits for myself, I don’t feel quite confident enough to start sewing for other people.

Whenever I put on an outfit I’ve made, it feels like heaven. Sewing has made me realize that I can accomplish whatever I set my mind to. I never thought I would be patient enough to learn how to sew—and I want other people to know that if I can learn, anyone can. 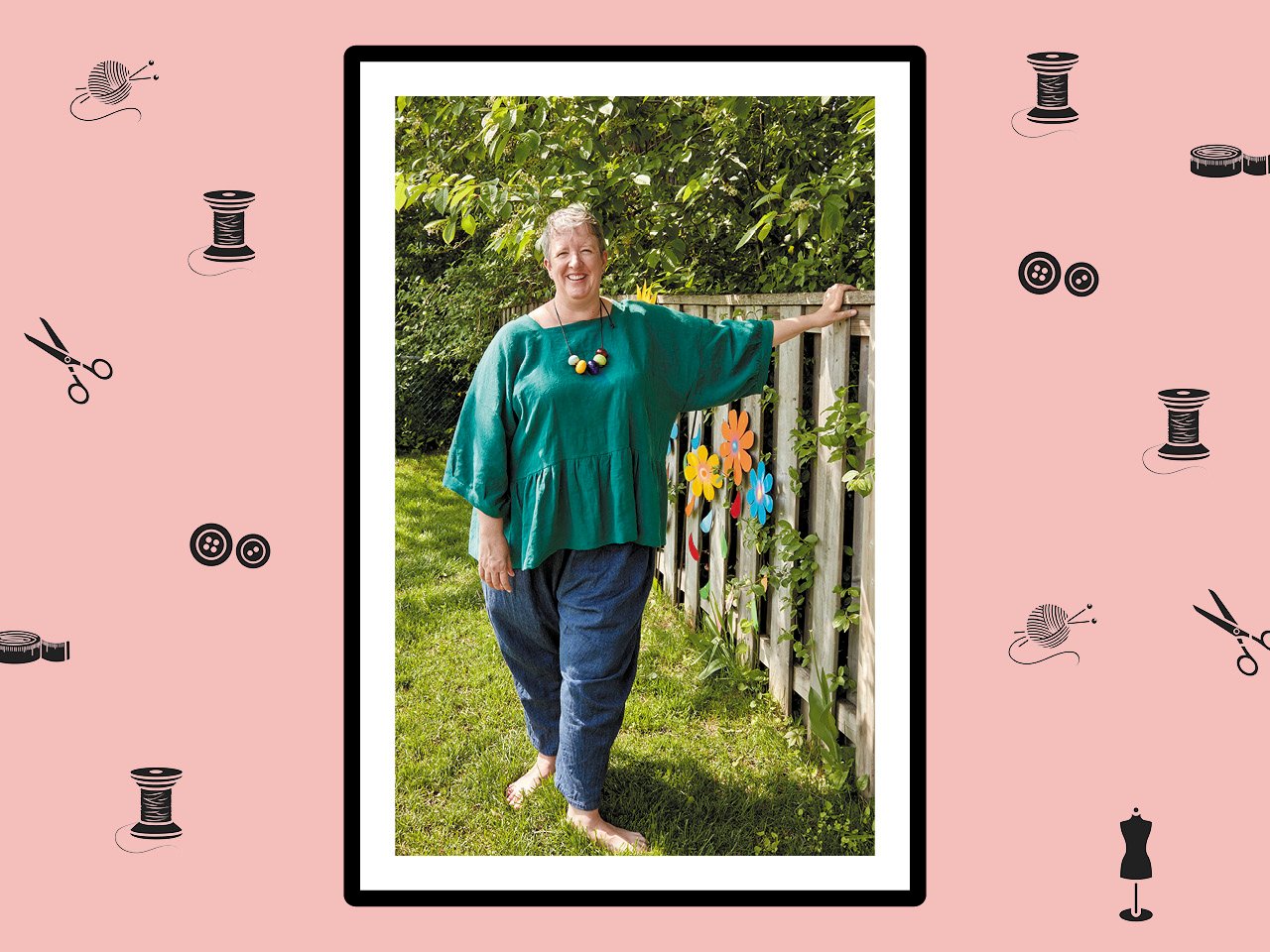 “This outfit makes me feel grounded and joyous and allows me to take up space.” (Photo, Christie Vuong. Illustrations, iStock.)

After my great-grandfather got sick, my grandmother’s family didn’t have a lot of money and sewing was how she maintained a middle-class appearance. She taught me how to sew when I was seven, and I mostly made doll clothes—which I did up until my teens. By adulthood I had given up sewing, but things changed in a big way when I went through menopause in 2020. All of a sudden, none of my clothes fit. I couldn’t abide anything tight.

I started developing sensitivities to fabrics. I’m a knitter, but suddenly I couldn’t bear the feeling of wool next to my skin. I was trying to clothe myself when everything shut down.

The first thing I made from scratch that fit me properly was a pair of elastic waistband pants; I adjusted the pattern to make them long enough for my legs. I made them out of black linen that had been sitting in my cupboard for about three years. I ended up wearing them and washing them so many times that the linen turned grey.

Menopause has also changed my relationship with gender. I’m a professor, and a few years ago I started asking my students to share their pronouns because I wanted to respect them. A lightbulb went off. I’m still playing around with what feels right, but at the moment I’ve settled on gender fluid. Making my own clothes offers me the freedom to dress exactly how I want.

I’ve never felt comfortable with feminine styles; I prefer oversized silhouettes, like box tops that aren’t binding or restrictive. Whenever I put on the drop-crotch balloon pants I made from a Tina Givens pattern, I feel like my best 53-year-old gender-fluid self.