All eyes are on the Raptors right now, but the national women's team has already proven itself worthy of Olympic gold. 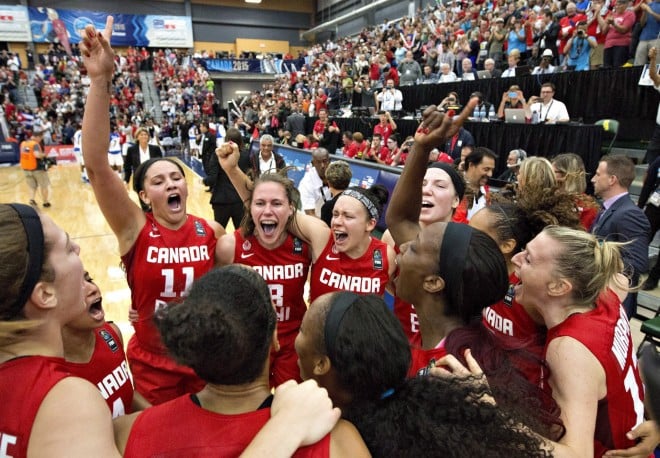 The Toronto Raptors made history Sunday, advancing farther than ever before in the pursuit of an NBA championship title. It was a victory for the “6ix” and a coup for a nation that so rarely wins at the sport it created. But as all eyes veer stateside to watch the Raps take on the Cleveland Cavaliers in the Eastern Conference final, we’re already looking forward to Rio.

Why? Because that’s where Canada’s national women’s team is slated to slay their American counterparts — again.

Canada’s women’s basketball team is a force to be reckoned with — a “bonafide powerhouse,” according to the Globe and Mail‘s Cathal Kelly. The team snagged its first-ever gold at last summer’s Pan Am Games in Toronto, beating the U.S. team 81-73. They also handily won the 2015 FIBA Americas Women’s Championship in Edmonton to qualify for the 2016 Rio Olympics.

Yes, Raptors high-scorer Kyle Lowry has had some brilliant moments in this playoff run so far. But Canadian women’s team point guard Kia Nurse shot a stunning 33 points during the Pan Am final, which Sportsnet reporter Michael Grange called a “privilege” to watch.

“Tonight she became a star,” Grange said. “She lifted her country on home soil against the U.S. — a performance that will go down as one of the best ever by man or woman wearing a Canadian jersey playing basketball for this country.” Nurse’s epic performance earned her the role of flag-bearer in the Pan Am closing ceremonies.

And while Raptors head coach Dwayne Casey gets a ton of credit for leading the team this far, women’s national team coach Lisa Thomaidis brought Team Canada to gold and the University of Saskatchewan’s Huskies to number one amongst Canada’s university women’s basketball teams.

Team Canada will play the U.S. again in Group B at the Rio Olympics in August, and while Drake may not be sitting courtside, we certainly will.

More:
How Maria Toorpakai went from hiding from the Taliban to top athlete
Is this Sports Illustrated swimsuit cover a victory for women?
Sophie Grégoire-Trudeau’s call for help sets a good example