How two women teamed to start a construction company

The co-founders of Ryan Murphy Construction are changing the perception of the industry one job at a time. 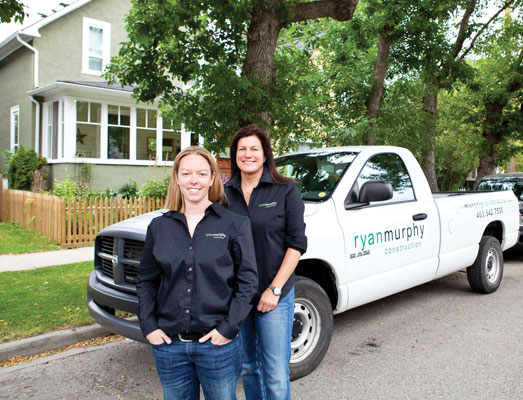 There was no secret handshake. But when Lara Murphy and Karen Ryan met on a construction site in Banff while working as project managers, it was so rare to see another woman that each took notice.

Soon after, Ryan Murphy Construction was born. It was 2008 and the beginning of the U.S. banking crisis. “In retrospect it was one of the best things that could have happened. It meant we had to be on-site more than we initially planned. We could then truly appreciate what all the trades were doing,” says Lara.

Over the past five years, Lara and Karen have turned that insider knowledge into gigs for commercial clients that include design houses such as Christian Dior and Ralph Lauren as well as communications companies Rogers and Fido.

Along the way they accidentally became experts in modifying homes for people with disabilities. They’d helped a friend whose daughter has cerebral palsy make her house more wheelchair accessible. “We then ran a charity race under her name,” says Lara. “Not only did we raise a lot of money, but we gained tons of Facebook followers, many of whom were looking for help making their own homes more wheelchair friendly.”

Defining assets: “One of people’s pet peeves is never being able to get a hold of their contractor. We get back to people right away. We’re trying to change the perception of the industry — one job at a time.”

Biggest challenge: “Problem solving. Day to day, we’re handling a lot of curveballs. Like when a sprinkler goes off because a plumber got too close. You have to figure it out as you go.”

Shining moment: “Hitting a million in revenue and surpassing our gross revenue year after year!”

Trade secret: “It sounds clichéd but dropping a gift basket, bottle of wine or thank-you note to clients stands out. Not that we’re leaving scented notes, but you get the idea.”