She might be the CEO of GE Canada, but when it comes to making decisions about her career, the whole family weighs in 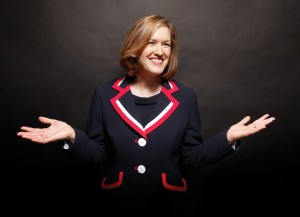 Elyse Allan might be the CEO of GE Canada, but when it comes to making decisions about her career, the whole family weighs in.

Elyse Allan has the kind of poised, regal bearing that can seem intimidating at first. As the president and CEO of GE Canada, she is one of the most powerful women in the country, overseeing a $5-billion business with about 300,000 employees. While light bulbs and appliances are the company’s most familiar products, they actually make up only a small portion of its sales. Elyse runs a multifaceted conglomerate stretching across sectors as diverse as finance, health care and renewable energy.

Yet the image of an aloof commander disintegrates when she starts to laugh—which she does easily, especially when talking about how she wound up head of the company. She admits, for instance, that she had no set career plan. Raised in suburban New York, Elyse thought she wanted to be a doctor, but while in pre-med at Dartmouth College, she realized that she was more interested in health policy than practice. A job at a hospital analyzing costs was a revelation. “I loved the numbers, and that I could have an impact in a very big way on a large community,” she says. “I liked figuring out the complexity, and not everyone could do that.”

This analytical mindset and a willingness to make career detours have been lifelong constants for Elyse. Over three decades in business, she has managed everything from a troubled chemicals company to a division of Ontario Hydro. Her longest stint was the 10 years she spent as president of the Toronto Board of Trade. With each switch, she weighed the challenge and risk by asking herself, “What would I learn? Would I have a good story to tell?”

GE, however, has been “my professional upbringing and my home,” she says. She worked for the company in numerous positions over three distinct stretches: first in corporate marketing starting in 1984; then as an executive in the Canadian division, for which her former bosses recruited her after learning she was engaged to a Canuck; and finally, as of 2004, heading up the entire operation in Canada.

Elyse believes that careers are family affairs. After she and her husband moved to Toronto from New york in 1988 and had a son, she opted to take a job with better hours and little travel. “I wanted to make sure that when my son had a soccer game or a play in the middle of the day, I could be there.” When she was offered the CEO post at GE Canada, the Allans held a family meeting. Her son, then 12, was happy to gain more independence and gave an enthusiastic nod. Her husband, who was no longer travelling as much, told her, “Elyse, it’s your turn. Whatever you want to do, we’re behind you.”

The former head of United Way of Greater Toronto, Anne Golden, who’s worked with Elyse on initiatives ranging from affordable housing to helping poor northern communities, calls her superb at crafting strategies for complex issues that defy linear solutions, “and at gently but firmly persuading others to follow her lead.” For Elyse, this is about communication as much as problem solving. “People want to know where you want to lead them,” she says, “so being able to articulate a sense of vision is very important.” There are many models of leadership, she adds, and the more inclusive, consensus-building approach most women use is in no way inferior. “Women don’t have to conform to some artificial stereotype they’ve seen on TV.”

Yet she often sees women in business struggle with a reticence to voice their opinions. “Men will sometimes speak over one another, and women will let that happen, as opposed to joining in,” she says. “In some business cultures, if you don’t jump into that fray, you won’t get heard. If we get to the table and then don’t participate, shame on us. Focus on confidence and finding your voice.”

With all her responsibilities, Elyse manages her time rigorously. “I’ve been a list maker since elementary school,” she says with a laugh. But while she often has meetings into the evenings, when she’s not travelling she always has dinner with her husband (her son is now away at university). It’s a comforting routine: While she cooks, the couple share a glass of wine and discuss their days. “My parents always did that,” says Elyse. She has little time left for hobbies and her circle of friends is smaller, but at 55, she views that as a choice rather than a sacrifice. She sees her career as a journey with no pre-set destination and her life as a book, with herself as the author. “No one else should write your story,” she says. “And not every chapter should be the same.”

Take the time to discover what you enjoy about the work you do, and whether you could find it in different industries or positions. Understanding your aptitudes opens up your future options.

Be clear about why you’re making a change and what you hope to learn from it. If something doesn’t work out, will you have a good story? But Allan cautions, “It’s important for people to understand their risk tolerance, especially as you have more people attached to you in life.”

Each time she left GE, it was with a clear explanation of what she was looking to gain. “The world is a small place and you never know when paths will cross again,” she says. She’s still in touch with every one of her past bosses.

4. Have the courage to speak up

Do your homework, but don’t wait for your idea to be perfect. Canadians in general, and women especially, tend to be more comfortable listening than talking, Allan says, being “engaged but not as active participants.”

5. Hire people unlike you

Many managers fall into the trap of surrounding themselves with like-minded lieutenants. “On a leadership team, I want diversity of thought and background so you have a healthy debate. You don’t want to sit there and have everybody nod.”

Don’t let someone else do it for you.