Just How Worried Should I Be About The Economy Right Now?

It’s natural to feel panicky after Monday’s market freefall. We asked the experts what you should—and shouldn’t—do when it comes to protecting your money. 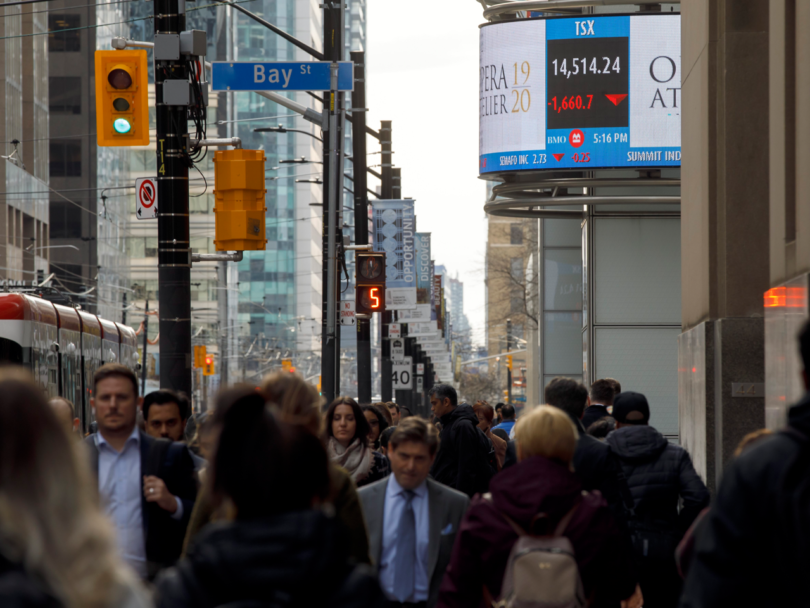 Fears around COVID-19’s economic impact came to fruition on Monday, with a historically bad day for global markets. Experts say the crash could be a precursor to a more drawn-out financial crisis, but at this point, nothing is certain except for—repeat after us—uncertainty. Here’s what you need to know.

Exactly how worried should I be about Monday’s crash?

Even the most brilliant financial minds don’t have any certainty about the severity of the fallout. Most experts agree that things are likely to get worse before they get better, but “the sky isn’t falling—this is just what happens,” says Rose Anne Devlin, an economist and professor at the University of Ottawa. Overall, whether or not you should be worried depends on factors like employment status (contract workers and anyone working in impacted industries like travel or hospitality are especially vulnerable), current financial security (people with low debt and high savings are better equipped to ride the storm) and age. “Younger people don’t have any reason to be worried about the markets. These kinds of crashes are followed by recoveries,” says Janet Currie, an economist at Princeton University. The groups who stand to be most affected are retired folks who have lost savings they were counting on, as well those who are nearing retirement. “People may consider postponing those plans,” Currie says.

Did COVID-19 cause the crash?

It did, if not totally directly, says Devlin, noting that Monday’s drop can be attributed to an imperfect storm of factors starting with a market that—global health crisis notwithstanding—was due for a correction. Fears and uncertainty relating to the COVID-19 outbreak and the ensuing economic slowdowns in two of the world’s largest economies (China and the U.S.) created further vulnerability. And then last week the world’s most powerful oil producing nations gathered to address a global drop in demand. Russia refused to sign on to a plan to cut prices, and Saudia Arabia responded by flooding the market causing oil prices (and the market) to tank.

On the bright side, cheaper gas sounds like a good thing?


That depends, says Devlin. “Like everything else, there are people who win and there are people who lose.” Yes, lower gas prices mean paying less at the pump and to heat your home; this will also benefit the manufacturing sector. But on the flip side, Western Canadians working in the gas industry (and those employed by the surrounding industries that the gas industry creates) are going to take a huge hit.

Canada fared better than America during the 2008 financial crisis. Will that be true this time around?

In 2008, Canada fared better than the U.S. because our banking system (including the mortgage market) is a lot more regulated. This time around, says Devlin, it’s our universal health care that could give us the edge: “Canada is in a much better position because of our health-care system and because we have a social safety net that is much stronger than it is in the U.S.—particularly for the low-income population.” Earlier today Ottawa announced a $1-billion economic support package as a response to the fallout from COVID-19, which includes measures like killing the one-week waiting period usually required to access unemployment insurance. Another important factor, says Devlin, is the fact that Canadians went through the SARS crisis not so long ago. “I think we have a better understanding of best practices around hygiene and preventative measures.”

I keep hearing that people need to have a three-to-six month emergency fund. Good advice, but what if you don’t have that?

First off, don’t beat yourself up. About half of Canadians don’t have an emergency fund—of any amount. But there’s no better time to change that than now, says Kelley Keehn, a personal finance educator and consumer advocate for Financial Planning Canada. She says that building up that safety net should be the number-one priority for anyone stressing over the financial impacts of COVID-19. If you’re carrying credit card debt, call your bank to see if there is a better option in terms of cards. “You don’t need the bells and whistles right now, just the low rates.” You might also want to ask your financial institution about a consolidation loan or a line of credit. (“Better now than after you’ve lost your job,” says Keehn).

Keehn also notes that most mortgages in Canada have a “skip a payment” option that you could take advantage of to create an emergency fund. “That’s not something I would ever recommend normally,” she says, “but if you really need to fund that emergency account, missing that payment without penalty could be a good way to access extra funds.”

What about taking money out of my RRSP?

Don’t, says Keehn. Depending on your risk, a lot of Canadians will have seen a dip in their RRSP since Monday’s crash, but with time it will bounce back. “Taking money out now will only crystallize losses.”

Is there anything I should be doing right now to safeguard my investments?

There’s no magic bullet, and a crisis is not the time to make adjustments, says Keehn: “One day the market is down 2,000 points, then it’s back up 1,000, then back down.” Ultimately, you and your money will be better served by holding tight.

However, if you experienced significant losses following Monday’s crash, and that has you freaked out, take it as a sign that you need to rethink your investment strategy. A crisis, says Keehn,will often highlight existing vulnerabilities—such as a too-risky portfolio. “Sit down with your financial planner now,” she says. “Once the crisis is over, people always forget.”

Should I be stockpiling money?

Think of cash the way you do canned food supplies—you probably won’t need them, but it’s a good idea just in case. “You want to ask yourself, if the electricity were to go down, how long could you and your family go?,” says Keehn. Normally she tells people to have enough for a long weekend, but in light of a potential pandemic, a two-week supply of cold, hard cash is a good call.

The Bank of Canada just cut lending rates. Is this a good time to finance my dream kitchen?

It has never been cheaper to borrow money in Canada, which means the temptation is high. But now is not the time to fund that dream vacation or kitchen reno. “You want to use the rate cut to make yourself wealthier—maybe paying your mortgage off more quickly due to a lower rate.”

What about switching to a fixed mortgage while rates are so low?

Keehn says that anyone with a variable mortgage can talk to an advisor about the possibility of locking in. “There are a lot of variables to consider. You want to know your options and talk to a professional.”