How she became a master chef

Career advice: Connie DeSousa traded her ballet shoes for chef’s whites and a cleaver. Now she’s one of three women turning up the heat on Top Chef Canada. 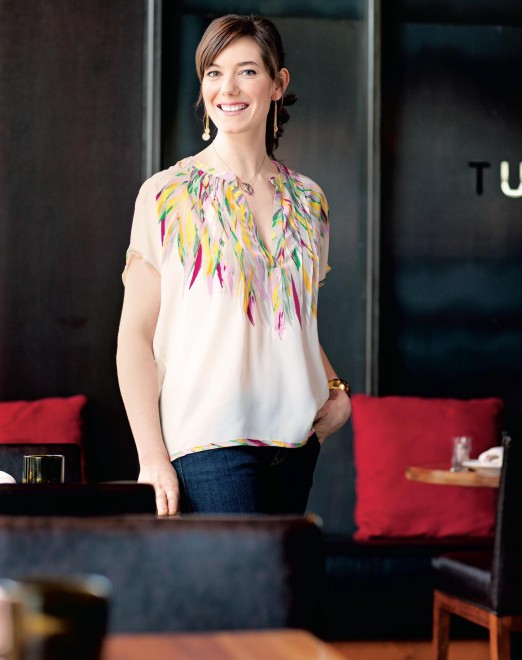 Among a budding cohort of successful female chefs on the international food scene, Connie DeSousa, 30, is the co-owner of Calgary’s Charcut Roast House restaurant.

Before you trained as a chef, you took ballet. Why did you turn your back on the barre?
I started dancing when I was five, and it consumed a lot of my time, especially when I began competing. But you realize early on whether you’re going to be a prima ballerina or not, and I knew I wouldn’t be one. Still, I was passionate about ballet and stuck with it until I was 18. It taught me professionalism and helped me find a sense of drive and determination, which is really important in the culinary world.

How did your parents react?
They were disappointed. They had put a lot of time, effort and money into ballet school. I remember when I told my dad I wanted to quit, he said, “If you’re not going to be a dancer, you’re going to be a flight attendant,” which sounds funny, but I think after I’d spent my childhood in Calgary, he wanted me to see the world.

Is there a big foodie scene in Calgary?
There is now. People are travelling more and are really educated about their food. This city used to be a meat-and-potatoes place, but nowadays it’s completely different.

What ignited your love of food?
In Grade 10, I took my first food class—it was a program to teach students about nutrition, but we touched on professional cooking as well—and I fell in love with it. My mom and dad are really great cooks too. My mom is Irish-Canadian and my dad is Portuguese, so I’d have amazing lamb stews and soda bread one night, then a seafood dish with fermented red-pepper sauce the next. ( My dad actually makes that same sauce in my restaurant today.)

So how did you come to specialize in meat?
I’ve always had a passion for meat. In 2000, after I graduated from culinary school, I apprenticed at Owl’s Nest in Calgary, where they do their own butchering and charcuterie. It helps that we’re home to some of the best meat in the world right here in Alberta.

What are your particular specialties?
We make our own sausages and pâté, and cure all of our meat in-house, including the bacon. I’m pretty proud of this, because charcuterie is such an important part of our menu. We also came up with an unusual mortadella dish flavoured with spices, truffles and pistachios. Everyone really loves it.

Charcut is known for its local fare. Is that hard to maintain in Alberta in the middle of winter?
Initially, I was worried about that, so we spent three months building relationships and breaking bread with farmers, visiting them and learning about their products. There were some pleasant surprises: In Innisfail, for instance, we found great artichokes in the summer. Ultimately, we’re concerned with having the best ingredients we can get.

Has being a chef led you to explore food abroad as well?
Definitely. I got into competing early in my career, signing up with Team Alberta. That took me to Germany for the World Culinary Olympics in 2004, where I stayed with a local family. After that, I worked at a restaurant in Cologne for over a year. Then, in 2006, I was asked if I wanted to open the St. Regis hotel in San Francisco, which is where I eventually met my husband, Jean. Then came another opportunity in California: a stint with Alice Waters at Chez Panisse in Berkeley.

What was Chez Panisse like?
In every restaurant, it all depends on who’s running the kitchen. The energy comes from the chef down. I was incredibly nervous and jittery on my first day, but once I started cooking, I got more comfortable. They offered me a job, but I wanted to return to Calgary. Jean and I decided to pair up with another husband-and-wife team to open Charcut, and that’s where we are today.

Is it challenging to run a business with friends, let alone your romantic partner?
I was a bit wary at first, and so many people cautioned me not to do it, but I had already worked with John and Carrie [Jackson, co-owners of Charcut] for 10 years, so we knew it would turn out just fine. Also, I’m in the kitchen 16 to 18 hours a day and my husband stays at the front of the restaurant, so I only see him in the morning and late at night. There are always minor clashes, of course, but we work it out.

What qualities do you need to succeed in the industry?
So many people want to be executive chefs right out of culinary school, or to become these Food Network stars, but in reality it’s a very cutthroat environment. I think everyone needs to prepare for the fact that hours are long, and the pay isn’t very good. Anyone can cook, but to be a great chef you need to be passionate—it has to come from your heart, from your soul.

How do you maintain a work-life balance?
I try to make time to hang out with friends and see my folks as much as possible, but it’s hard enough to get time alone with my husband. On my day off —I get one each week—we visit different restaurants together to see what other people are cooking.

Is it exhausting working such long hours?
A little, but I love the adrenalin of being on the line with 50 tickets up on my hitch—it’s invigorating. The thrill is what drives me, and it’s so gratifying when I get a moment to look out into a room full of people eating my food and see a bunch of smiling, laughing faces.

What’s your proudest career moment?
One of the biggest milestones happened in 2003, when I was competing in a national contest held by La Chaîne des Rôtisseurs, a very reputable culinary organization that was founded in 1950. I was the only woman among seven guys—and I beat them all. They were supportive, but there was definitely a macho factor going on: The industry is still very male-dominated. Then, last year, Charcut was named one of Canada’s top 10 new restaurants by EnRoute magazine, which was big. Being accepted as a contestant on Top Chef Canada [which premiered in April] was huge, too—I’m a major Top Chef junkie and have been watching it from the start.

How did you find being on television?
It took a while to warm up to the process, because cameras were around us 24/7, but toward the end of production it got easier. They wanted to see our true personalities, so what you see is pretty raw and authentic. None of us could really prepare for the emotional roller coaster the show brought forth—I wasn’t just competing with these people, I was living with them as well.

If you’re craving comfort food, what do you make in your kitchen?
I always keep my fridge well stocked with unpasteurized and stinky cheeses. One of my favourite snacks is a piece of crusty sourdough with some shaved parmesan and finocchiona salami. But when I actually cook at home, it tends to be a lot of slow food—long-braised meats, soups and stews. I love to make a big pot and eat it throughout the week.

Where do you see yourself in 10 years?
In a general sense, I’d like to be a role model for young women in this industry. I think there’s a certain culinary touch that women have and men don’t, and it’s important to draw that out. We definitely hope to start a family, but we’re so busy, especially with our plans for expanding the restaurant. Maybe two or three years down the road, we’ll make it happen. I don’t plan on leaving my work at the restaurant behind, though!