On Nursing My Baby While Nonbinary

"Though I am not a mother, I am the one who produced my daughter’s milk. And having not always been able to feed her directly, I’ve tried harder at pumping than anything in my entire life." 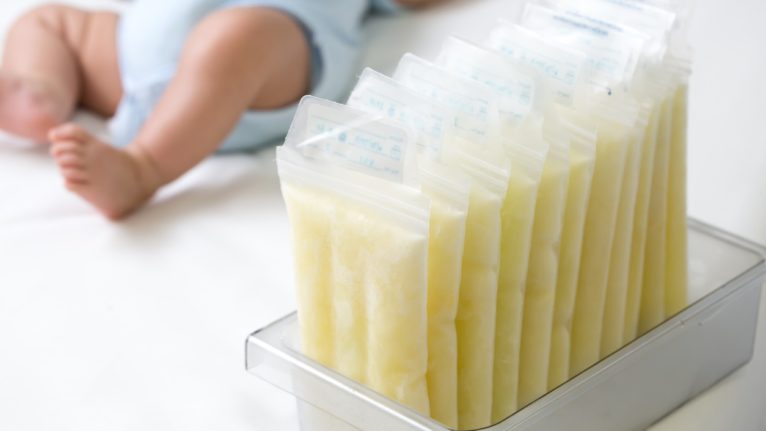 The following is excerpted from “Milk and Time,” an essay from andrea bennett’s collection Like a Boy but Not a Boy, which explores life, mental health and parenthood beyond the gender binary. Excerpted with permission from Arsenal Pulp Press.

The first time I pump, I’ve just arrived at work. I turn my phone facedown and place it on the side of the sink. To centre myself, I focus on my breathing. I read somewhere that looking at a picture of one’s infant while pumping can increase milk production, so I conjure a recent memory. But by the end of the week—my daily commute having wrung me of willpower—I sit hunched over to keep the bottles in place as I scroll through Twitter and answer emails.

When I switched back to full-time, in-office work from freelancing, Sinclair was five months old—still exclusively drinking breast milk. Feeding her became routinized, measured in ounces. Keeping up my supply meant never missing a pumping session; it meant drinking 100 ounces of water a day. It meant nursing three times a day, and pumping five times a day: 9 a.m., 11 a.m., 2:30 p.m., 4:30 p.m., 9 p.m. My day was given its rhythm through the act of expressing milk. Milk, milk milk milk milk milk.

Today, most humans live in urban centres, and we’ve applied the laws of industry to milk production. As I learned — staying hydrated and paying attention to my diet — nutrition is a key determining factor in how much milk you’ll get, from humans and cows alike.

Like humans, cows who listen to music while they pump produce more milk. Several studies have shown that slower-tempo music, like Beethoven’s Pastoral Symphony, decreases cows’ stress levels and encourages them to head to the milking machine. Their production is better when they are healthy, when they get to go outside, and when they get to socialize with other cows on their own terms.

Dairy cattle loom large in the human imaginary — black-and-white Holsteins are one of the first animals we learn about as kids after dog, cat, bunny. Cows are a collective, but they are also individuals with their own personalities, their own aches and pains and preferences. I thought about them a lot while I sat alone, drinking water and pumping.

In mid-June, I get to work after an extra-long commute only to realize that the pump’s batteries are also low. As it wheezes along; I stare at the wall with my dead phone in my pocket, feeling as though the sapped batteries and the slow bus and the stuck train are all fine metaphors for how I feel commuting three hours a day while also pumping enough milk to ensure that our stockpile is growing instead of being depleted.

In late July, I get sick with a fever and go home early from work. I lie down to take a nap, and when I wake up, my face is swollen. The doctor at the walk-in clinic asks, “Your face doesn’t always look like that?” It must be simultaneously a virus and an allergic reaction, she says, shrugging. My partner Will brings Sinclair upstairs and I feed her lying down in bed. But being sick means I have less milk, and a slower letdown, and Sinclair gets frustrated. My milk has slowed down right in the middle of a heat wave, when Sinclair is extra thirsty. She bites me because the milk isn’t coming fast enough. She bites me and I cry, and the tears roll down my swollen face.

The fever passes, but the milk won’t come back. There’s enough for Sinclair when I’m with her but not when I pump. I read about how to increase my supply, but the blogs are tailored to lactating parents who are at home with their babies. Take a breastfeeding honeymoon, they say. Stay in bed all day with your baby and focus on feeding her!

On a weekend when I have several edits to complete and a literary magazine to lay out, I start taking fenugreek and blessed thistle, herbs purported to help boost milk production. I pump for 20 minutes a session instead of my usual five to seven. I order Mother’s Milk tea and hold my non-binary selfhood back as I glean wisdom from the kinds of sources that claim your femininity will be strengthened if you spend time in a yurt. I take the bus and train and continue to pump , five times every day.

By August, I have become a person with a 6:30 a.m. vitamin alarm. My milk is running again. We are three-quarters of the way to one year, and Sinclair has started to eat solid food. I am relieved my milk came back. I think about how much everybody loves Sinclair. I hope Sinclair always loves herself as much as everybody loves her right now.

While “fed is best” has somewhat supplanted “breast is best”—itself a response to the commodification of baby feeding, when families were encouraged to use formula and told it was better than breastmilk—the recommended practice for feeding infants is still breast milk. Posters in hospital and pediatrician waiting rooms underscore this message; it feels, at times, like the public health message is designed to “educate” mothers who use formula, as if the most important thing standing between them and making the best choice is ignorance and not a complex mix of economic factors, time constraints, and other pressures.

Though I am not a mother, I am the one who produces Sinclair’s milk. As I am burning out on the SkyTrain, and pumping and pumping and pumping, I come across an article that suggests that not only is breastmilk best, but that milk should ideally come directly from nursing. I watch the first episode of a TV show where a milk pump is a prop for a thin white executive who has begrudgingly gone back to work, who leaks through her shirt while helping land a dairy company account. I have yet to see, on TV, a 22-year-old at her retail job pumping in an overstock closet while her manager knocks on the door to remind her that her break ends in two minutes. I’ve yet to see a trans dad cycling across the city with an insulated cooler to pick up supplemental breast milk from someone he met through Facebook.

In the absence of being able to always feed Sinclair directly, I’ve tried harder at pumping than I have tried at anything in my entire life. Will stays at home with Sinclair and he thaws the milk tilts the bottle up and she drinks the milk as fast as is humanly possible—and it’s still not enough to be the best. We are not the best because we are lower middle class and I am not a mother and the parent with the milk goes to work while the parent with the beard stays at home. I know it’s bullshit, and it’s only going to get worse—many North Americans are getting poorer and many of us are getting less like mothers and many of us have health challenges, like polycystic ovarian syndrome, that make milk production more challenging. Many of us will never be the best. The very idea of the best is in part an idea that shores up the gestation and birth and development of a child as a luxury experience, the child as a luxury good. “Failure”—not being the best—is not a function of the inadequacy or ignorance of mothers (or their afterthought analogues); “failure” is a function of the pressures of capitalism.

I like to stand in front of the dairy case at the grocery store to picture the cows who produced the milk. I think about the milk production of cows as one line on the x-y axis and the breastfeeding rates of humans as another line on that same axis. We have been rendering one as efficient as possible, to the detriment of that animal, at the same time as we have been rendering one a luxury experience, to the detriment of that animal as well.

Pumping feels more like being a cow than breastfeeding does, and that says a lot about the relationship between cows and humans, and the way we intercede in the relationship between a cow and her calf. Given that the average Canadian consumes about sixty-six litres of milk a year, it also betrays that we take for granted, and are dismissive of, one of our most significant food sources.

We introduced cow’s milk to her diet by mixing it with my milk, straight from the jug in the fridge. I had accepted that milk came in neat and tidy grocery store packages—without ever stopping to question why or how an animal product that comes from hundreds, thousands, millions of animals could be so regularized.

When I pump, I don’t feel like a cow, but I do think about cows. Their furry bodies, spotted or warm brown or russet red. Their affability, the way they pick a leader, the way their panoramic eyes follow a field interloper as their heads dip and raise, their jaws working as they chew their cud. I want to feel a radical kinship with cows, but I haven’t earned it. I don’t want them to go from one type of Fisher-Price imaginary to another, where they carry narrative or symbolic weight for my feelings about working and pumping and nursing and growth. Organic milk in a thick glass bottle feels like a bespoke artifact, but the truth is that the milk we buy now in a four-litre jug for $5.49 is just as much of a gift.

In October, when Sinclair is ten months old, my milk production dips again. Ten months is the point at which dairy cows are allowed to go dry for a period, before they are inseminated and calve again. My body, finally shedding the after-effects of gestation, is re-seeking its normal. Sinclair is eating more solid food and needs less milk—maybe the anxiety I am feeling is less tied to Sinclair’s needs and more a reflection of the fact that I have been fixated on the math of ounces and hours for so long that it will be hard to let it go.

Later, when Sinclair turns one and we celebrate with carrot cake, I should feel relief. My goal was to reach one year of breastfeeding, and I’ve met my goal. I am tired of pumping but keep developing excuses to push off reducing pumping and feeding sessions. I am tired of pumping but scared of what it means to be done feeding Sinclair my milk—not because I am afraid of breaking a special bond, because for us nursing is not the best representation of our parent-child relationship—because it signals that she’s no longer an infant, that we have passed into a different stage of her life. Of course, she’s no longer an infant either way. But imagined kinships and metaphors and magical thinking illuminate internal truths more than they illuminate objective ones. 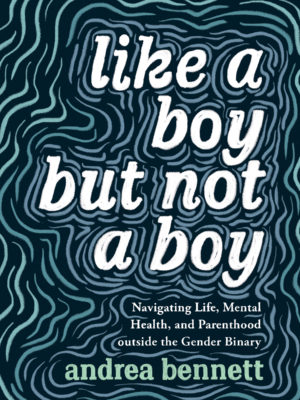 Like a Boy but Not a Boy is now available for purchase.