In an excerpt from her just-released book, The Long Road Home, academic Debra Thompson shares what it's like to be the only Black person in so many white spaces. 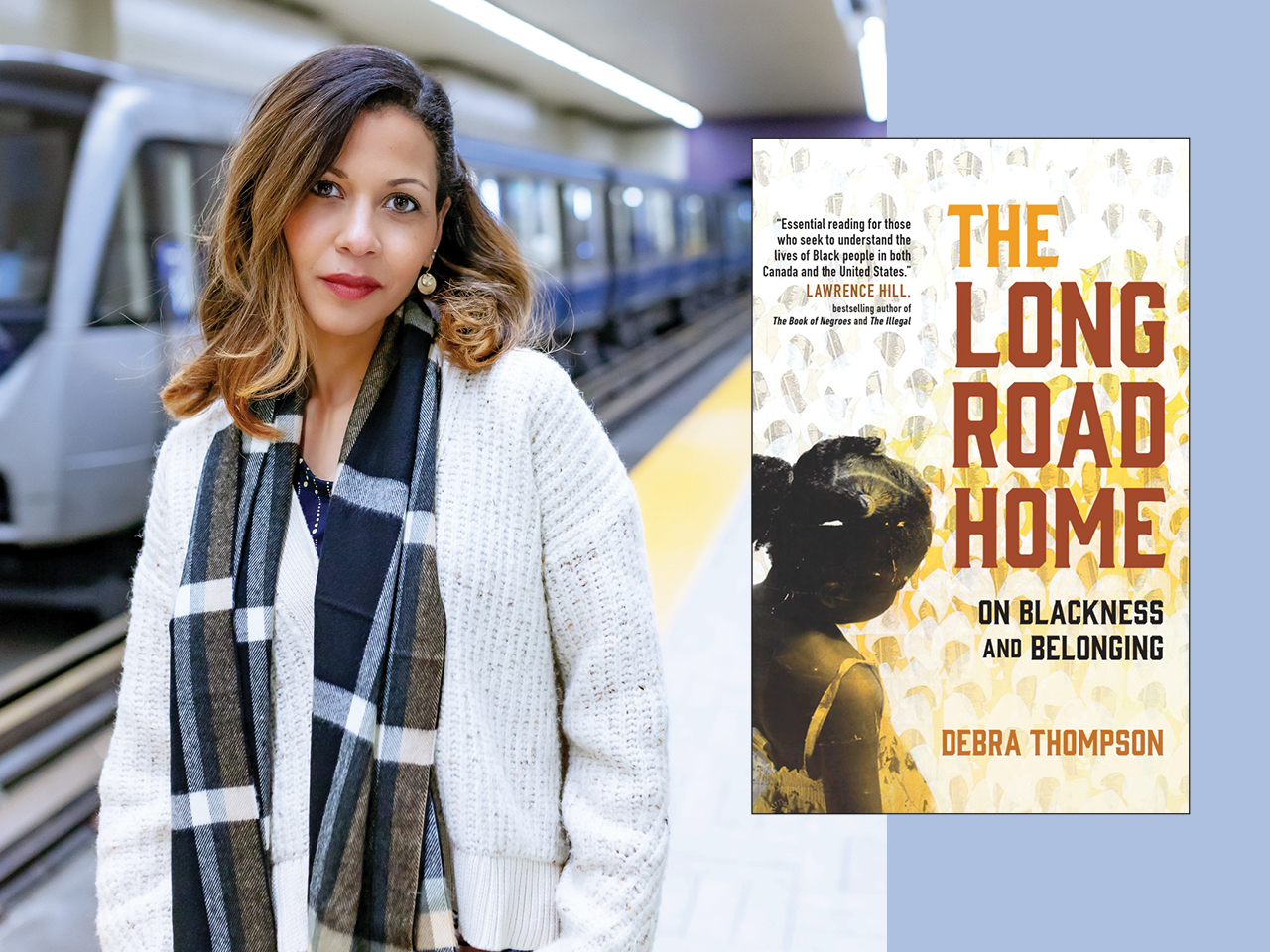 “You know, Debra,” my father sometimes says, “hindsight is 20-20 because any fool can turn around and look behind them.”

There’s something both settled and unsettling about the ability to look back on one’s life in 10- or 20-year increments. It’s a perspective that highlights with tragic and triumphant clarity who we once were in relation to who we are now. It’s only in hindsight that the layered, compounding nature of everyday moments becomes meaningful. It turns out that the mundane is often much more consequential than the spectacular.

I have a clear memory of a Friday night like any other, hanging out with my grad school friends at some scuzzy bar on Yonge Street in Toronto, around the time when Barack Obama, then a junior senator from Illinois, had launched his campaign for the American presidency. I was talking to a friend about one of the central struggles in my research, namely, how to compare the dynamics of racism in Canada and the United States.

“But you’ve at least got to admit that multiculturalism resolves some of the issues that they have in the States,” she countered. It was an ordinary, typical, forgettable moment, and hers was an ordinary, typical, standard response that I had heard before. But she was a friend—and is still one of my very best friends, actually—and she loved me, and I thought she might be willing to see the world turned upside down, so I decided to try a different tack.

“Jenn,” I said. “Have you noticed that I’m the only not-white person in this bar?”

I remember her exact expression. Her eyes widened a little and she froze, lowered her beer bottle, and slowly turned in a circle, her eyes scanning each corner of the room. She faced me once more, a look of shock on her face.

I took a sip of cheap, flat beer. “If our positions were reversed, and you were the only white person in a room of Black people, do you think you’d notice then?”

“Yeah. Yeah. Yes, I definitely would,” she replied.

I shrugged and we let it be. Years later, I did, in fact, take her to a bar where she was the only white person in the room. She reminded me of this conversation—by then it was just one moment among the thousands that comprise our friendship, but she never forgot it. The first time she saw through the invisibility of whiteness. Neither did I.

During the first three decades of my life in Canada, I was often the Only One. The only Black student in any class, grade, and school. The only Black kid on the soccer team. The only Black employee in the branch of Indian and Northern Affairs Canada, where I worked for several years before leaving the civil service for a life in academia. The only Black graduate student in the political science department. The only Black person in any space, anywhere, anytime, everywhere, every time.

Being the Only One didn’t make me feel particularly unique or successful or special. It made me think that there was something inherently wrong with Black people and that I had to fight against it every single day to defy what the fates had in store for us. These weren’t conscious thoughts, of course. They were the undercurrents of being, seldom spoken aloud.

“I don’t know why they’ve got to have their pants hanging off their ass,” my father used to mutter while watching the Toronto police arrest young Black men on the evening news. And the local Toronto news, with its dramatizations depicting young Black men as the perpetrators of all kinds of social ills, alongside American television serials like Law & Order, was where most of my information about Black people came from. Caribana, as Toronto’s summer street festival celebrating Caribbean culture was called then, was regularly portrayed in the media as a space of interchangeable Black revelry, violence and danger. The Canadian media provided endless messaging of Black people as deviant, as criminals, as gang members, as pathological, as threatening to white safety and sanctity. The intersection of Jane and Finch was racial code for an American-like ghetto that existed out of time and out of place in the post-racial diversity of Toronto.

Those were the stereotypes I felt I was up against. Every time someone exclaimed how well-spoken I was, how very articulate, how refreshingly smart, what an achievement it must be for my parents to see me in university at all, it was always said with a coy smile that hinted at the surprise of finding me in spaces where I clearly didn’t belong. Praise always came with a side of gaslighting.

But I didn’t see it then for what it was. Instead, it just made me more desperate to prove myself worthy. It’s only in hindsight that I see this drive to excel as born of the same internalized racism at the heart of respectability politics. The measure of Black worth is determined by how readily, how easily, how often, how durably we can assimilate into white society. Assimilation is never a neutral process. It’s not possible to be absorbed into a world that was built by theft and genocide, torture and mass murder without letting the many and varied excuses for these horrors infiltrate your logics and rationalizations for why things are the way they are. Whiteness always sees itself as benevolent, allowing all into its fold, if only we’re willing to try. As if behaviour alone could grant access to the heavily patrolled and guarded borders of whiteness.

“We have liberal democratic values here,” whiteness tells us sagely. “Your presence will be tolerated as long as you adhere to our values and obey our laws. What? Well, yes, our laws were written exclusively by white people, but they are fair and applied equally. It’s just that Black people commit more crimes. And yes, we are a democracy and you are free to assemble and protest! But don’t you dare inconvenience capitalism while you’re doing it. And the police can legally and legitimately beat and arrest you for speaking out. And we will condemn, belittle, and harass you for exercising these democratic rights, because you are really just ungrateful that we have so kindly permitted you to live here, among us, on this land that we stole from Indigenous people and in this wealth and prosperity that your ancestors were forced to build for free.”

When whiteness speaks, it’s always within a decibel of threat. Part of the trickery of white supremacy is in masking the threat of violence in a cloak of fragility and insecurity. Whiteness is so unstable, so easily stained that just one drop of Black blood used to be enough to ruin it. Assimilating into a predominately white society therefore necessitates a disdain for those elements of Blackness that were created in defiance of white supremacy’s demands for obedience and conformity. Respect is earned, we are told. Respectability can be wrangled, unwillingly and incompletely, from the clutches of whiteness by performing white-approved behaviors. But, of course, mimicry always carries a temporal lag and facsimiles can never truly attain the power and persona of whiteness. For Black people, wresting these breadcrumbs of respect comes at the low, low price but high, high cost of hating Blackness.

And I was so very respectable.

But it was more than that, and worse—I bought into the respectability politics embedded in the idea that Black people must work twice as hard to get half as much.

“You cannot just be good,” one of the few women of colour in a faculty position at the University of Toronto told me in the early days of my doctoral program. “You’re a woman and a woman of colour, and that means you need to be much, much better than everyone else.”

As I smoked a cigarette and drank a cup of coffee on the benches outside Sidney Smith Hall at the University of Toronto, 10 minutes before the orientation to my PhD program was to begin, I decided that even if I wasn’t the smartest person in the room, I could work the hardest. I had to, realizing I was once again the only Black person not only in my cohort, but in the entire program, which had more than a hundred PhD students actively registered at any given time. Work twice as hard, hope for the best, be ready to fight the worst. That was just the way it was going to have to be. I knew that it wasn’t fair, but I also knew there was no getting around it. The benefit of the doubt is for white people, not for we Only Ones.