Actress Kristin Kreuk is returning to the big screen

Ms Chatelaine for the month of December, actress and spokesmodel for Neutrogena Kristin Kreuk, is flying high 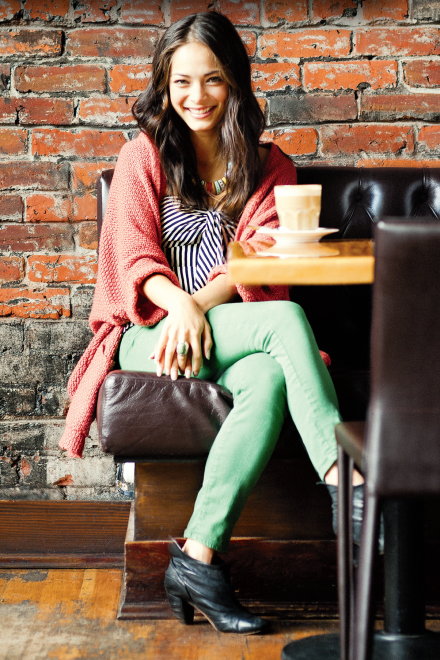 Looking at Kristen Kreuk, you’d be forgiven for thinking that you can’t quite place her. The Vancouver actor turned Hollywood starlet has a unique look that’s a perfectly Canadian mix: Her father, Peter, is Dutch; her mother, Deanna, is Indonesian Chinese; and she has a Jamaican-Chinese grandma.

Kristin is talented, super-friendly and funny; her conversation is peppered with jokes and silly accents. It’s hard to imagine that the 28-year-old who became famous for playing young Superman’s love interest, Lana Lang, on the hit TV show Smallville could just as easily have ended up a criminal psychologist or a marine biologist.

She was applying for university courses 11 years ago when she decided to go to her first audition on a whim, having never acted in anything but a school play. She landed the lead character on the CBC teen drama Edgemont. “From there, everything changed,” she says.

Two years later she began her eight-year stint on Smallville. “When I first started, my father used to drive me to the set in Langley [an hour outside of Vancouver] at 4 a.m.!” says Kristin. She’s since become a
glam spokesmodel for Neutrogena and is currently appearing in the movie adaptation of Irvine Welsh’s novel Ecstasy, described as the follow up to Trainspotting.

Kristin relished growing up in Mount Pleasant, Vancouver, chasing bugs and practising gymnastics in the backyard of her family’s home with her younger sister, Justine. Her love of exploration and sense of adventure continued into adulthood. Now she takes annual trips with three of her closest friends, which they call “wild women adventures,” to destinations as far-flung as Syria, the Amazon and Argentina.

But the easygoing actor always finds herself drawn back to Vancouver. “I spend the majority of my time here. It’s such an amazing city,” she says. She recently bought a home in L.A. with her boyfriend, Mark Hildreth, a fellow actor from Vancouver, and moved there with her beloved French bulldog, Dublin, in tow. “I’ll probably be doing the back-and-forth thing for a bit. The trip is like taking a bus for me nowadays.”

Speaking to Kristin, you’d never guess she was a painfully shy teen. She recalls the first time she was interviewed by a writer from Rolling Stone magazine. “It was terrifying,” she says. “There was a level of objectification that I felt I had to fight against.” Men’s magazines started calling and she struggled with the pressure of being a beautiful young actress in the spotlight.

Kristin soon got a handle on things and has channelled her creative energy into ventures outside of acting. In 2009, she co-founded Parvati Creative, a female-focused production company, “to push people into areas they are unwilling to look.” As an actor she’s choosing challenging roles too: In Ecstasy she plays Heather, the main character’s girlfriend, who rebels by experimenting with drugs. “There is an opportunity to use film and television to challenge and question,” she says. “Even if it is in small ways.”

Downtime for me is…a glass of wine sitting outside with friends.

I wish I had more time to…nurture all the relationships in my life.

I wish I was better at…being practical. I’m really creative, but can be weak with details.

The last time I laughed really hard was…this morning. I was telling my friend how I threw my neck out trying to turn the faucet. I’ve never thrown my neck out before — I was a gymnast!

Beautiful accessories: “I’m addicted to textiles, bangles and all kinds of jewellery.”

Kiddie snacks: “With or without my kid friends I eat gummies, string cheese and goldfish crackers!”

DVD box sets: “I’ll get a complete TV series, like Six Feet Under, and watch the whole thing as fast as I can.”

Dance: “I love watching it and doing it — I take Bollywood and jazz classes.”