From Canada’s first Prime Minister to the British empire’s first female judge, these influential figures are (rightfully!) having their problematic legacies questioned. 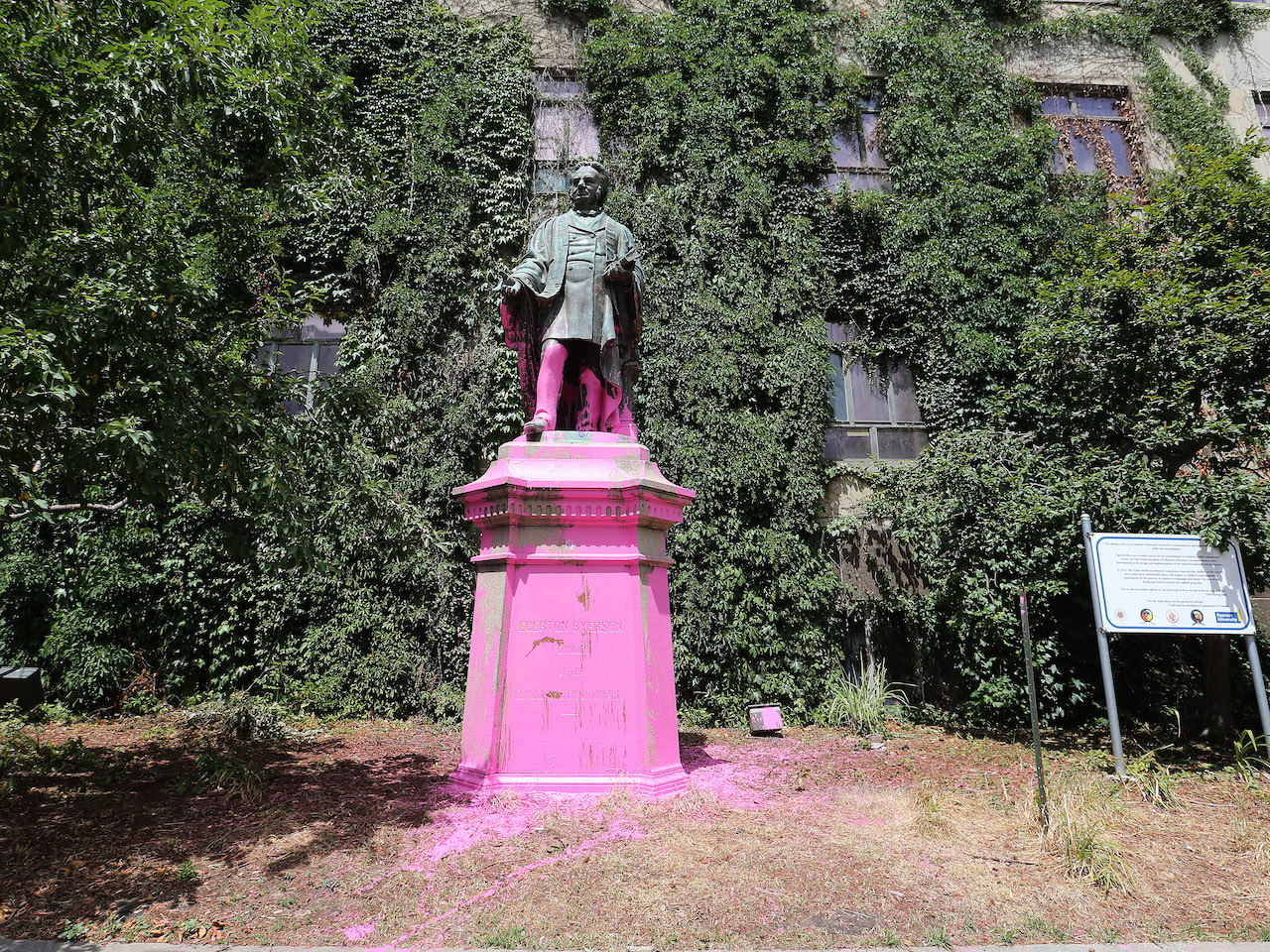 The statue of Egerton Ryerson outside of Ryerson University, after protestors threw paint at it in July. (Photo: Steve Russell/Toronto Star via Getty Images)

In August, a statue of Sir John A. Macdonald was toppled in Montreal by activists during a rally to defund the city’s police. According to CBC, the act was explained in leaflets that described Canada’s first Prime Minister as “a white supremacist who orchestrated the genocide of Indigenous peoples with the creation of the brutal residential schools system….”

Macdonald’s statue was not the first to be toppled or vandalized in Canada, and it very likely won’t be the last. Even before conversations about systemic racism became more mainstream this year, statues of historical figures were the topic of controversy. Heated discussion has swirled around the need for honesty about the ugly parts of history, questioning whether monuments are truly educational tools, or simply celebratory symbols.

For many people, tributes to divisive Canadians are a reminder of the pain their communities have experienced, traumas that continue to affect many Black, Indigenous and other racialized people. As Kerry Benjoe from Muscowpetung Saulteaux Nation recently wrote for CBC about a Macdonald statue in Regina: “If we as a society are serious about creating a better future it should include all people. Keeping space for controversial figures, especially those who did not build [Saskatchewan], does nothing in terms of relationship building.”

Because unflattering history is often buried, people can be confused (and sometimes defensive) when a previously celebrated figure’s legacy is called into question. Here, the back stories on five Canadians whose statues are—or could soon be—up for debate.

In 1749, soon after arriving at Mi’kma’ki, the founder of the city of Halifax instituted his notorious “scalping proclamations,” offering bounties for the scalps of murdered Mi’kmaq, an Indigenous people in the area. Cornwallis’ proclamation promised a “reward of Thirty Pounds for every male Indian Prisoner above the Age of Sixteen Years brought in alive or a Scalp.”

As such, his statue in Halifax’s Cornwallis Park has become a point of controversy in recent years. In 2018, activist Rebecca Moore told APTN her point of view. “I want people to know that he committed genocide against our people. He ordered, he wanted us wiped out,” she said. “What kind of a man is that and why do we have a statue of him in the park?”

A City Council task force mandated with figuring out what to do with the statue produced a report stating that Cornwallis had expressed his desire to “root… [the Mi’kmaq] out entirely” from the area. It called the scalping proclamation a cruel policy that allowed racist bounty hunters to profit off of violence against Indigenous people.

In 2018, Cornwallis’ statue was removed from the park and placed in storage.

This Ontario public education advocate has an entire university named after him—Ryerson University in Toronto, which is where his statue stands. He’s credited with setting the groundwork for free compulsory education in Canada, but as Ontario’s chief superintendent of schools from 1842 to 1876, Ryerson also recommended that Indigenous children be put in boarding schools, away from their families, with religious and English language teaching.

His report was used to implement the residential school system, making him one of its key architects. The schools operated between the 1800s and 1996, and more than 150,000 Indigenous children attended—many were subjected to physical, mental and sexual abuse. In 2015, the Final Report of the Truth and Reconciliation Commission called the practices at the schools acts of “cultural genocide.”

Ryerson’s statue has been vandalized multiple times. Just this past summer, it was covered in pink paint, and decorated with a sign reading “tear down monuments that represent slavery, colonialism and violence.” Ryerson students have also petitioned the university to remove the statue from campus twice, in 2017 and 2020, as part of the student union’s campaign to recognize the university’s colonial ties. 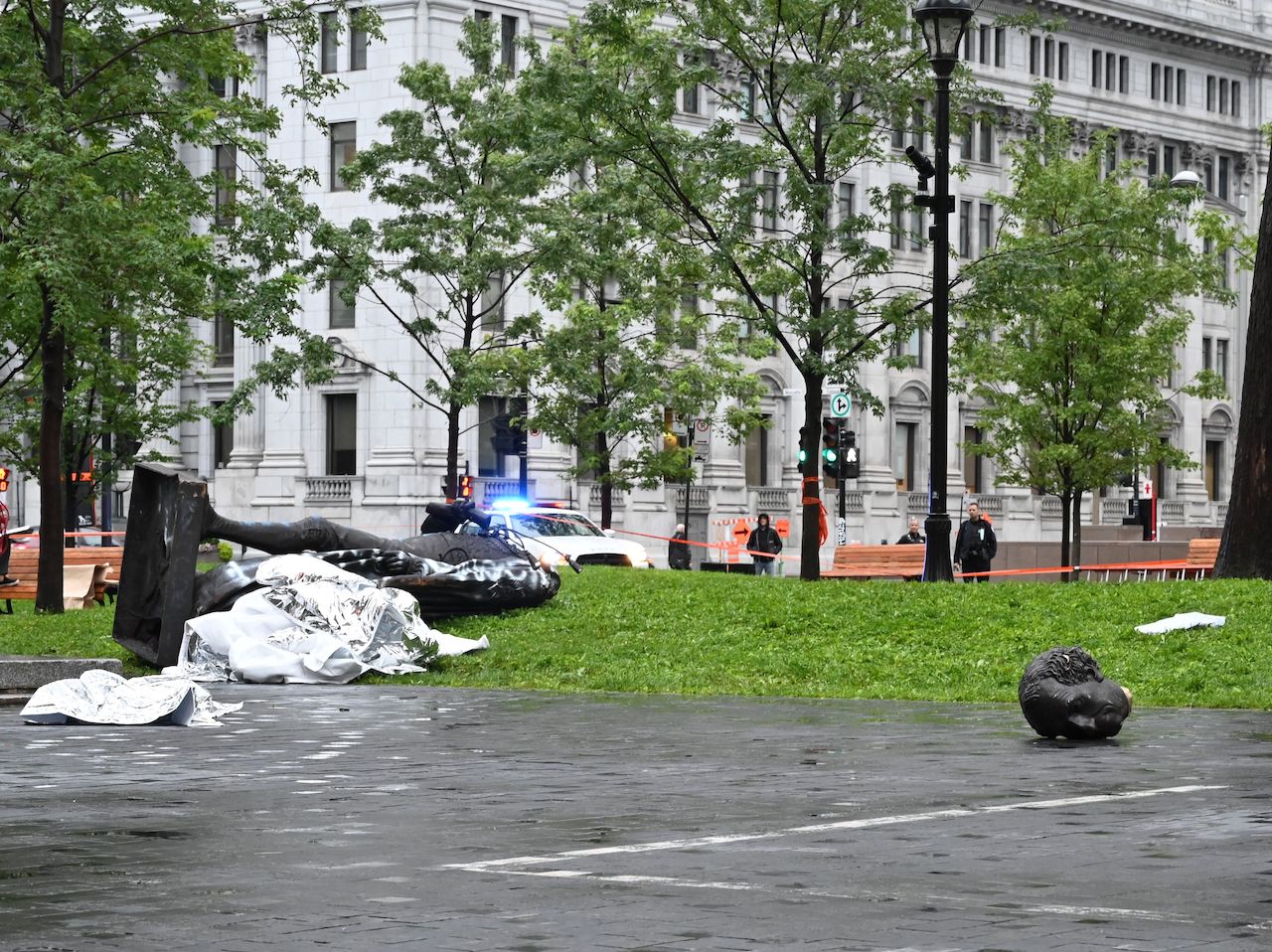 A statue of John A. Macdonald that was toppled by anti-racism activists in Montreal in August. (Photo: Eric Thomas/AFP via Getty Images)

JAM was one of the Fathers of Confederation—who also enacted many racist policies, the implications of which Canada is still grappling with. The vast majority targeted Indigenous people, including the establishment of the residential school system, through which he aimed to assimilate Indigenous children into white Canadian society by forcibly taking them away from their parents, banning them from speaking their mother languages and prohibiting them from practicing their cultural traditions. According to the Globe and Mail, an Indigenous child in a residential school was more likely to die than a Canadian soldier in World War II.

Macdonald and his government also starved Indigenous communities and forced them onto reserves to make way for the Canadian Pacific Railway, denying rations to communities in the area covered by Treaty 6 (now parts of Alberta and Saskatchewan) if they refused to move.

Macdonald’s government welcomed labourers from China to build the CPR across those stolen lands. But as railway construction was finishing up, Canada introduced a hefty duty of $50 (over $2,200 in today’s dollars) for any Chinese immigrant entering the country. The Chinese Head Tax was the first piece of Canadian legislation to exclude immigrants on the basis of ethnic origin. It separated countless families, as male workers were unable to pay for their family’s entrance into the country.

Also known as “Gassy Jack,” the founder of Gastown has had a statue in his namesake neighbourhood for over 100 years. Recently, however, Deighton’s past has been revisited with a more critical lens, with his legacy connected to the ongoing struggles of Indigenous women.

According to the 2019 documentary Red Women Rising, Squamish oral tradition recounts that Deighton purchased a 12-year-old girl named Quahail-ya to be his “wife” after her aunt, his first wife, died. She would later run away at age 15. Quahail-ya’s story has been held up as an early example of the violence and disregard Indigenous women still face in Canada.

“This is connected to Gassy Jack because he ran a bar [where his statue now stands] that catered to…the men who violated my women” says the voiceover in the documentary, which was produced by Battered Women’s Support Services in Vancouver. “Gassy Jack himself, married to a First Nations woman, whose name is erased, deleted, forgotten—yet his name is here on land that was never his.”

A petition calling for the Gassy Jack statue to be removed has garnered over 22,000 signatures since June.

Murphy is often remembered as a “trailblazer for social justice:” before becoming the first female judge in the British empire, she and four other women dubbed the Famous Five played a pivotal role in the 1929 Persons Case, when white Canadian women were established as legal “persons,” eligible for appointment to the Senate. However, like other members of the Five, Murphy has been criticized for being racist—especially her concerns about immigration and support of eugenics.

Under the pen name “Janey Canuck,” Murphy published the 1922 book The Black Candle, which posited that “aliens of colour” had banded together in Canada to form a conspiracy called “The Ring,” which planned to corrupt the white race with drugs. Her suggested solution was to deport people of colour (in particular, Chinese, Black, Mexican, Greek and Middle Eastern people). Though this didn’t happen, her racist conspiracy led to laws governing narcotics—Canada passed its first anti-cannabis law a year after the publication of The Black Candle, the first western country to do so, 14 years before the United States.

To this day, such laws disproportionately affect Black and Indigenous people, and other people of colour. In the lead-up to the legalization of cannabis, the Toronto Star found that Black people with no criminal convictions were three times more likely to be arrested for possession than white people with similar backgrounds.

Murphy also supported the eugenics movement—most notably the idea that “unfit” members of society shouldn’t procreate. As a judge, Murphy had a huge influence in Alberta and her support of eugenics contributed to the passing of the province’s 1928 Sexual Sterilization Act. The Act organized the nonconsensual sterilization of people who were considered “mentally deficient” and wasn’t repealed until 1972.

A statue of Emily Murphy still stands in Edmonton, and she is also memorialized at the Women are Persons! monument in Ottawa.