How One Couple Made Their Small Home Feel Big

They broke all the rules to transform their compact, 1,100-square-foot house into an airy live-work home. 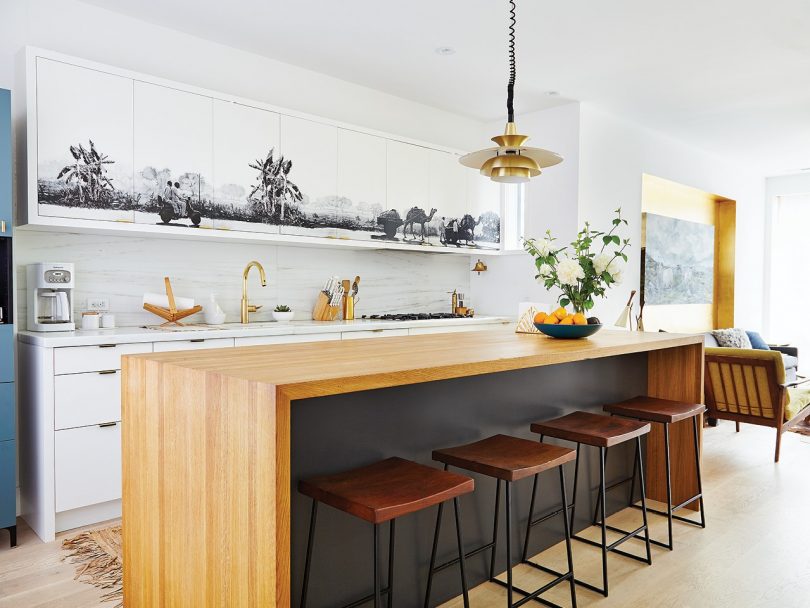 In contemporary interior design, trends change faster than Lady Gaga’s wigs. A few years ago, paisley was pervasive; now it’s passé. Remember when chintz was back? Well, it’s out again. But one decor idea has been constant for so long it seems as immutable as the laws of gravity: Open-concept rooms make small spaces feel bigger.

Then again, by re-introducing room dividers in an open-concept home, Charisma Panchapakesan and Brian Hagood are proving quite the opposite. The husband-and-wife architects live in a compact 1,100-square-foot house in downtown Toronto. Some people might consider the size spacious (after all, it’s a city where some new condos, such as the recently opened Smart House, barely measure 300 square feet). But considering the home’s many functions, the two have performed a space-planning miracle, finding adequate room for their two young kids (Brahma, 2, and Kerala, 6 months), their home office (they run a busy residential design studio called CAB Architects) and their cat, Sadie. They also have rental tenants in the basement, who access their suite through a separate entrance. 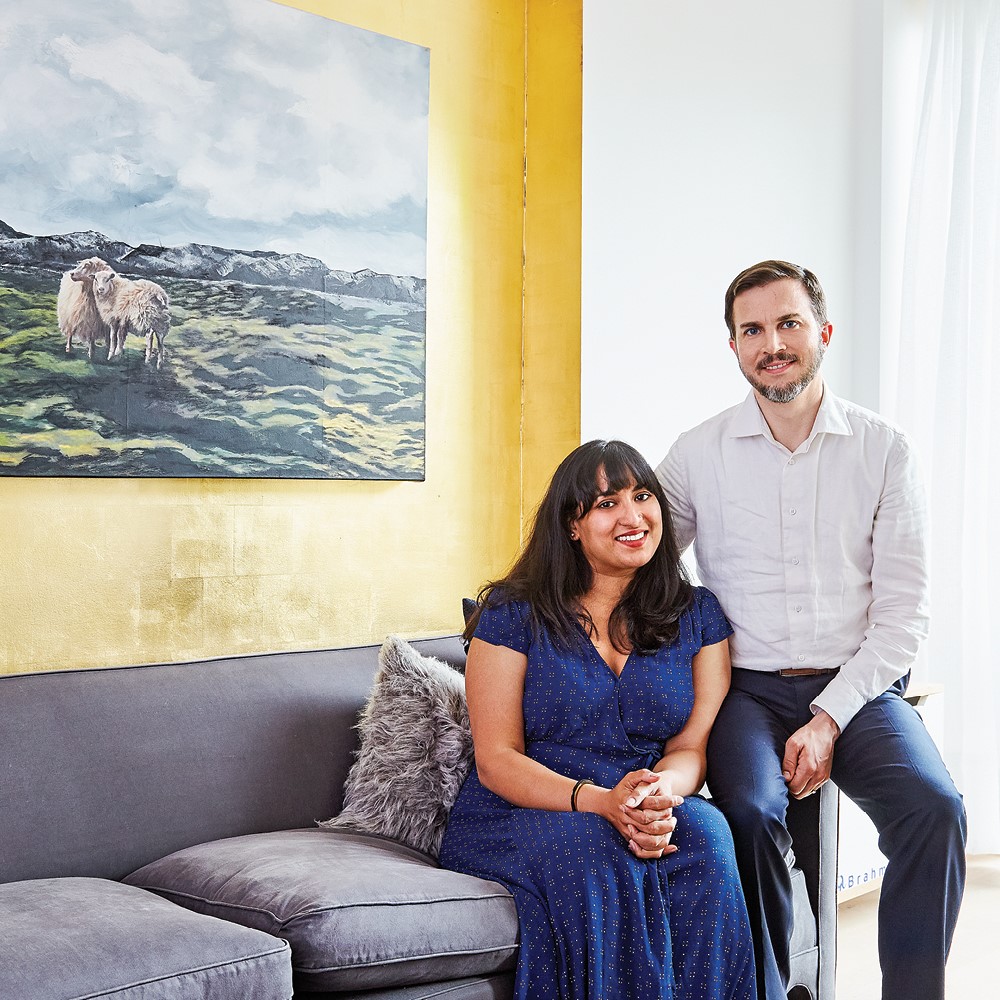 Cutting a niche into the drywall was a relatively small design tweak, but it has a bold effect. Photo, Ashley Capp. 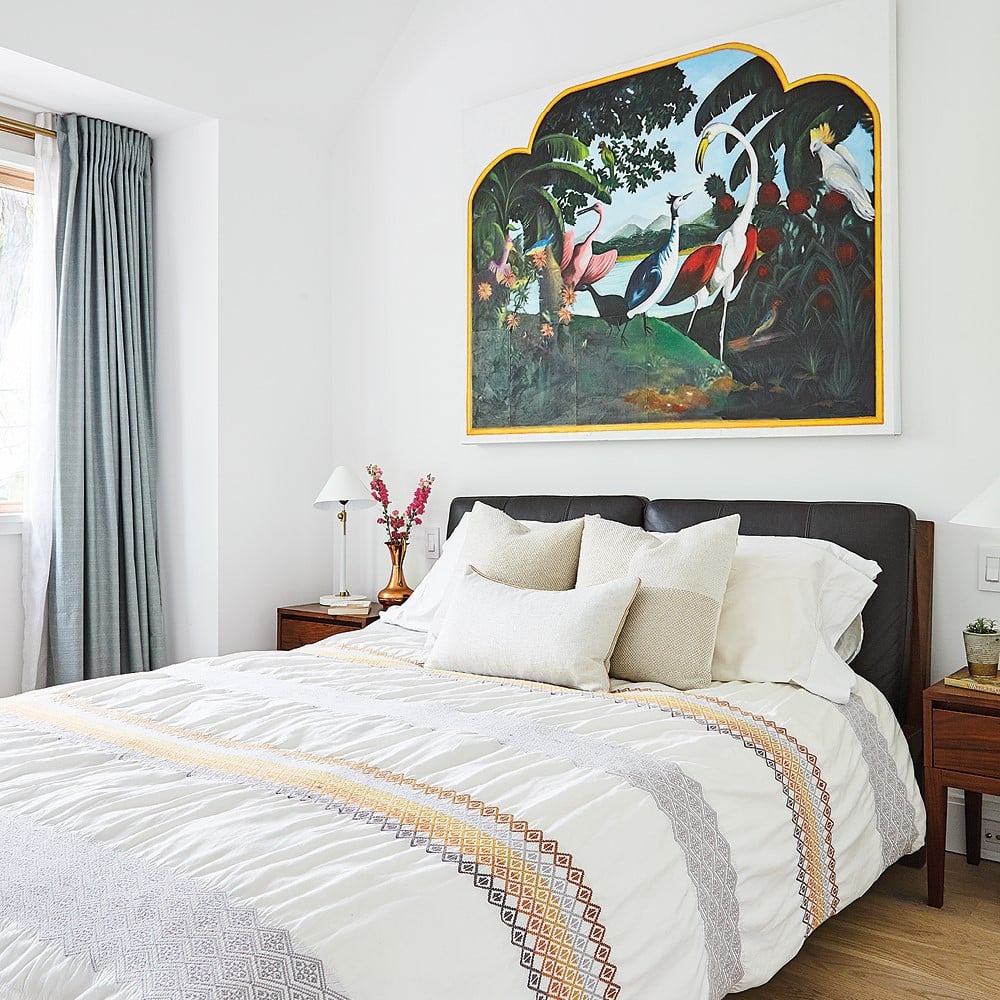 The master bedroom is compact, with room for little more than a queen bed and two small side tables. But because Hagood and Panchapakesan bumped up the ceiling, cutting into an underused storage attic, the space feels airier. Photo, Ashley Capp

None of this was feasible when Panchapakesan and Hagood bought the place in 2015. They’d been looking for a way to affordably upgrade from their 600-square- foot condo. The house had been in the same family since it was built at the turn of the 20th century—someone must have loved it a lot to keep it for so long. But than also meant the inside hadn’t been renovated since before colour TVs were invented. The structure was a crumbling dust heap in which literally everything needed to be replaced, including the plastic-wrap-thin windows and faulty, outmoded wiring.

In the remodel, Panchapakesan and Hagood went full-on modern (including triple-pane windows encased in clean-lined frames). And the floor plan followed suit. After their initial reno, the entryway, dining area, kitchen and living room all blended into one large room. Yet, despite conventional wisdom, the space didn’t feel right. “We used to walk in the front door and see everything all at once,” says Hagood. “There was no sense of narrative. There was no joy of going through and uncovering and discovering a little bit more of the house, room by room.” 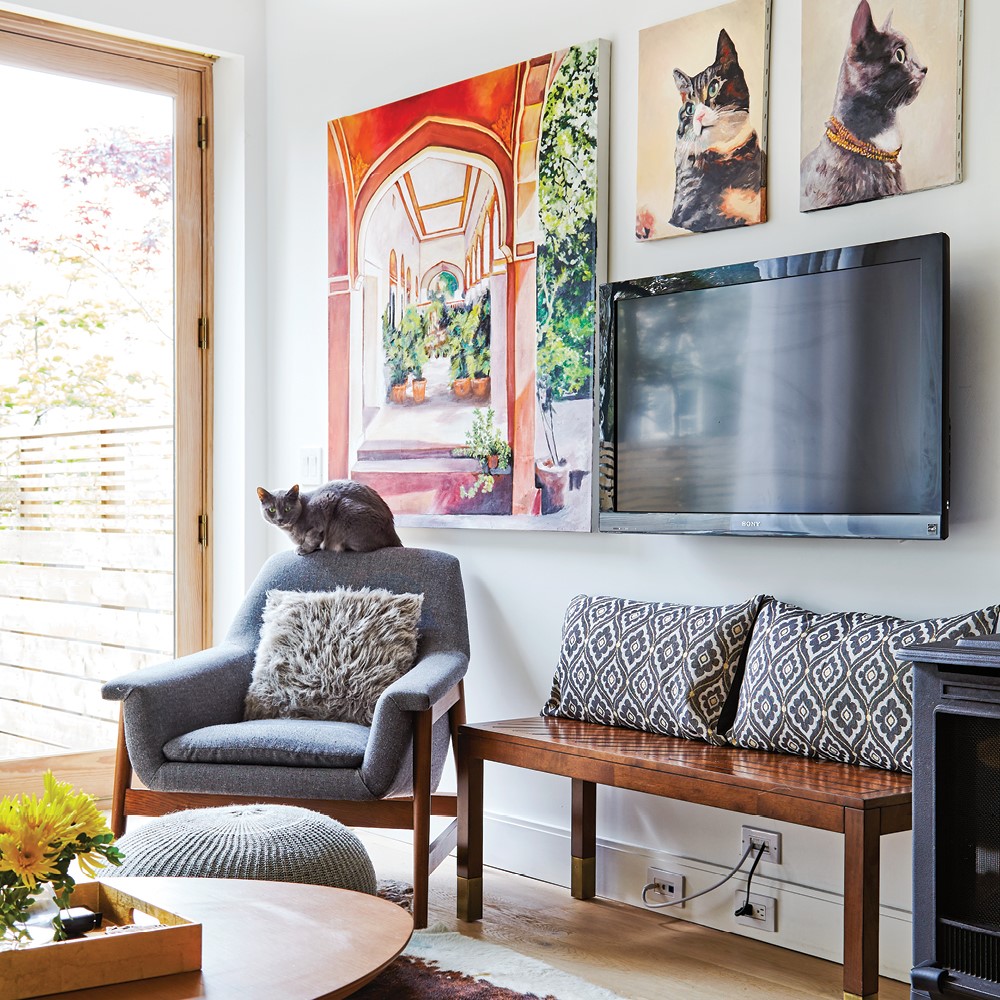 Hagood and Panchapakesan wanted a functional fireplace to warm up their living room but opted for gas over real wood to save floor space. Photo, Ashley Capp 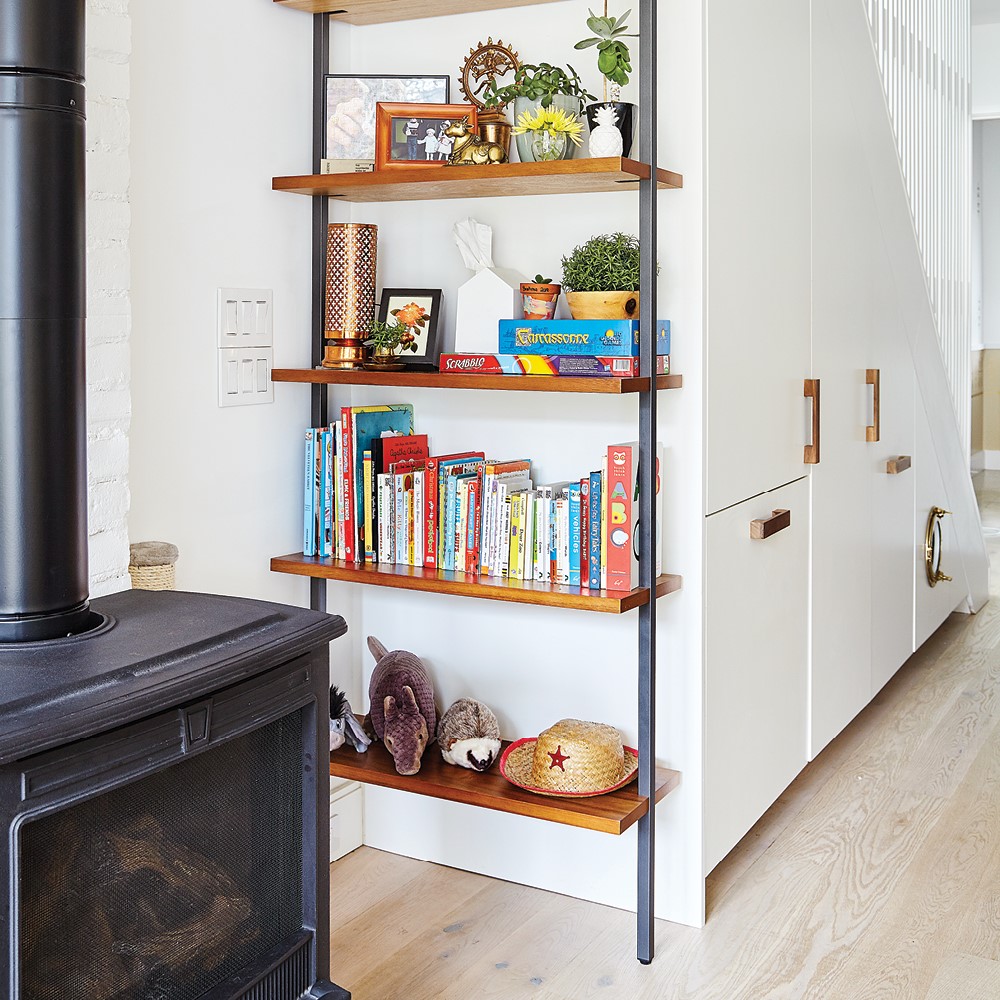 The couple relied on a backdrop of white to make the rooms feel larger. But they added quirky details to create character and avoid a clinical look. The walnut wood handles on the pantry cabinets, for example, cost between $10 and $20 from Lee Valley Tools. Photo, Ashley Capp

There were also practical reasons for adding partitions back in a few years later, which they did by enclosing the foyer and separating the dining area from the kitchen. (Endless tinkering is an occupational hazard of being an architect.)

“With the kids, the walls around the entryway make it more functional,” says Panchapakesan. “There are more places to hang coats, and the chaos of getting everyone in and out feels more contained.” Plus, the dining room doubles as CAB’s boardroom. The surrounding walls have built-in pocket doors, which can be closed off to create a sense of privacy during important client meetings, leaving the kids to amuse themselves quietly (or not) in the living room—something that’s impossible in an open-concept layout.

With the free-flowing open plan tossed out, Panchapakesan and Hagood focused instead on the strategy they call “big rooms in a small house.” Their idea was to make every area feel as capacious as possible, no matter its square footage. They achieved their goal partly through proportions. The dining room is about 95 square feet but feels larger as it’s not too narrow. The neutral palette is also key—the walls are mainly white, and the floors are light oak. And with large picture windows at the front and back, and a skylight overhead, there’s a lot of natural light. 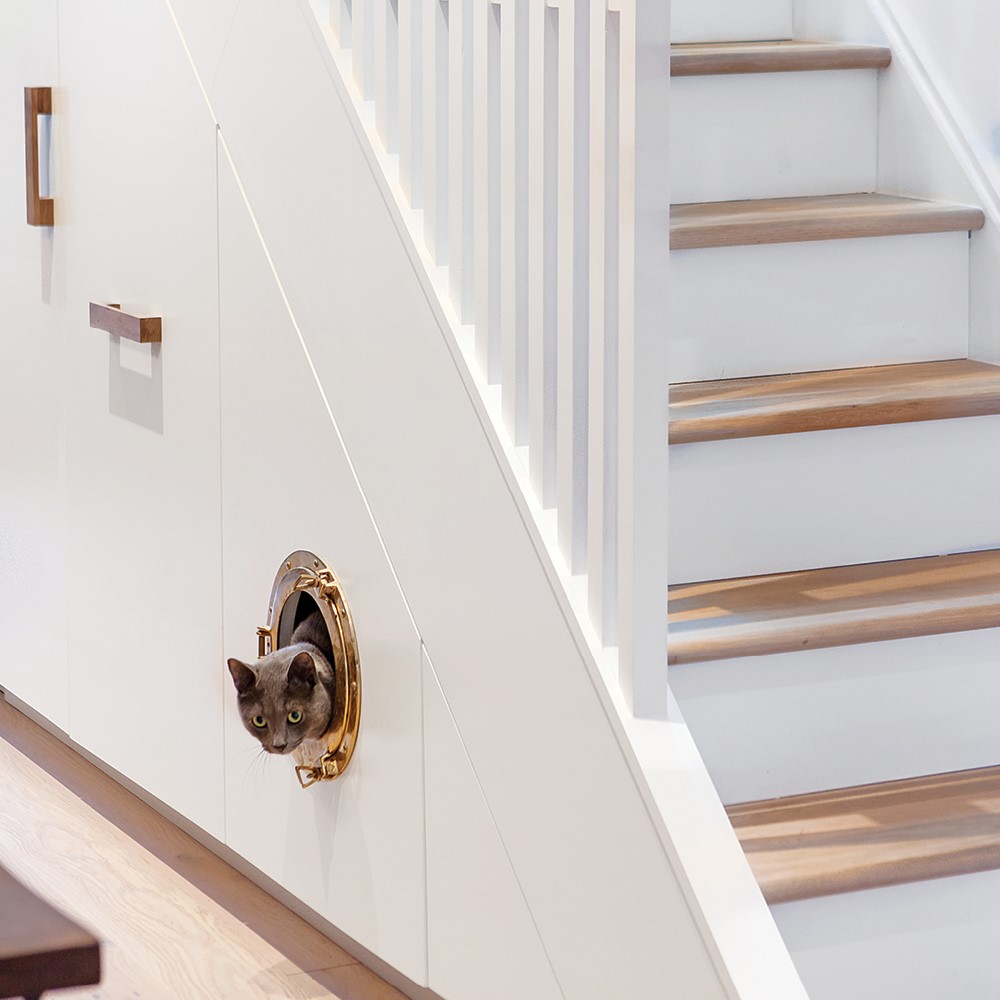 Their cat, Sadie, accesses her litter box through a porthole. Photo, Scott Norsworthy 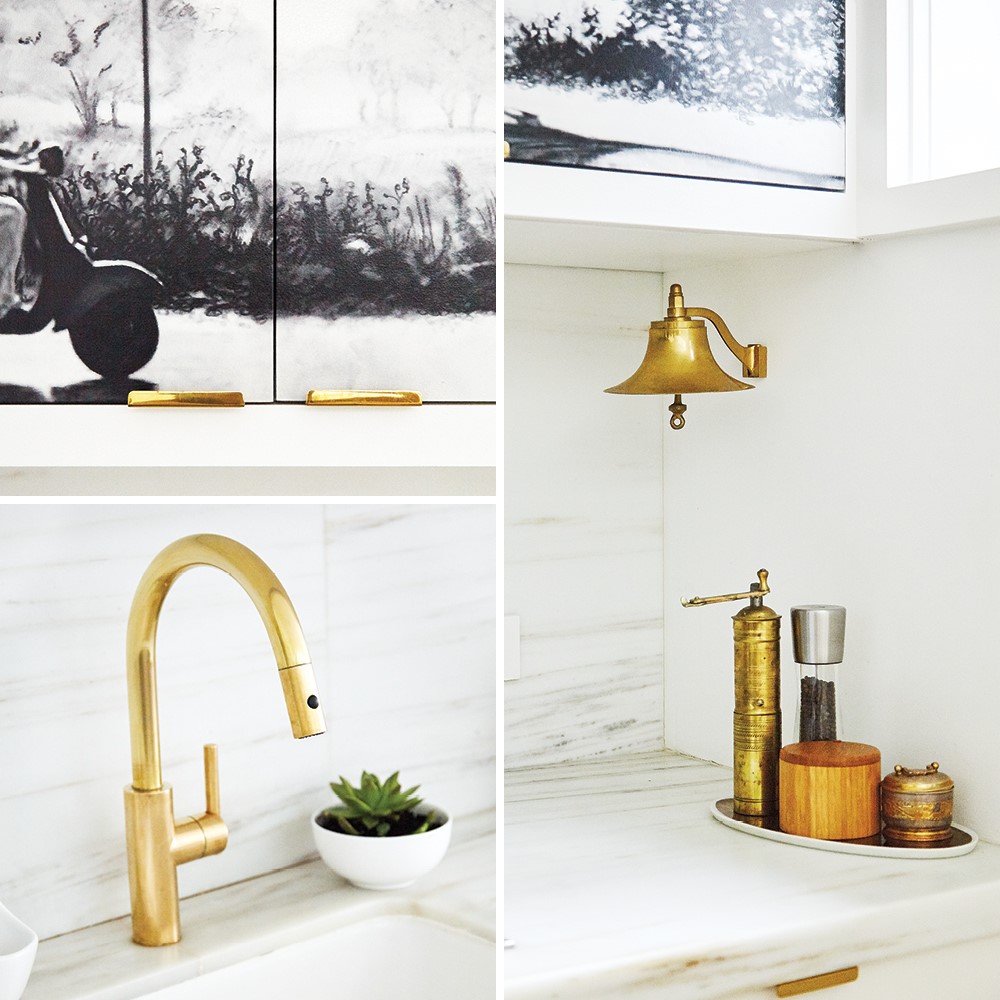 To add some character to the kitchen, Panchapakesan had this mural she drew printed onto vinyl panels. Photo, Ashley Capp

That Hagood and Panchapakesan are meticulous planners also helps: Everything has a well-considered place. They turned the gap under their stairs—an unused locale in many homes—into extra pantry cabinets, and it holds a second concealed fridge. (They love to cook and entertain.) At one end, they added a built-in litter box for their cat. Upstairs, where there wasn’t space for walk-in closets, they shoehorned fitted cupboards into the three bedrooms to neatly tuck away toys and clothes.

One thing Hagood and Panchapakesan found abundant room for was character. Despite all the white walls and hyperorganization, the home feels inviting, happy and casual, not clinical or austere. The warm metal accents help. Sadie steps into her aforementioned litter box through a brass porthole, the kind found on a sailboat window. The living room sofa is shrouded in a niche that was cut into the wall and then clad in shimmering gold leaf. It’s an area CAB clients like to sit in post-meeting, to enjoy an environment that is as whimsical as it is modern.

In addition, lots of touches speak to Panchapakesan’s South Asian origins. Most notably, she drew a mural of a north Indian landscape that she scanned and printed on vinyl panels to emblazon the otherwise plain kitchen cabinets. “I like that it shows a sense of personality,” she says. “It’s something unique to us.”

In other words, design doesn’t have to be some orthodox thing that follows rules or boxes people into set ideas. Except, of course, when being boxed in is what makes the space feel special. 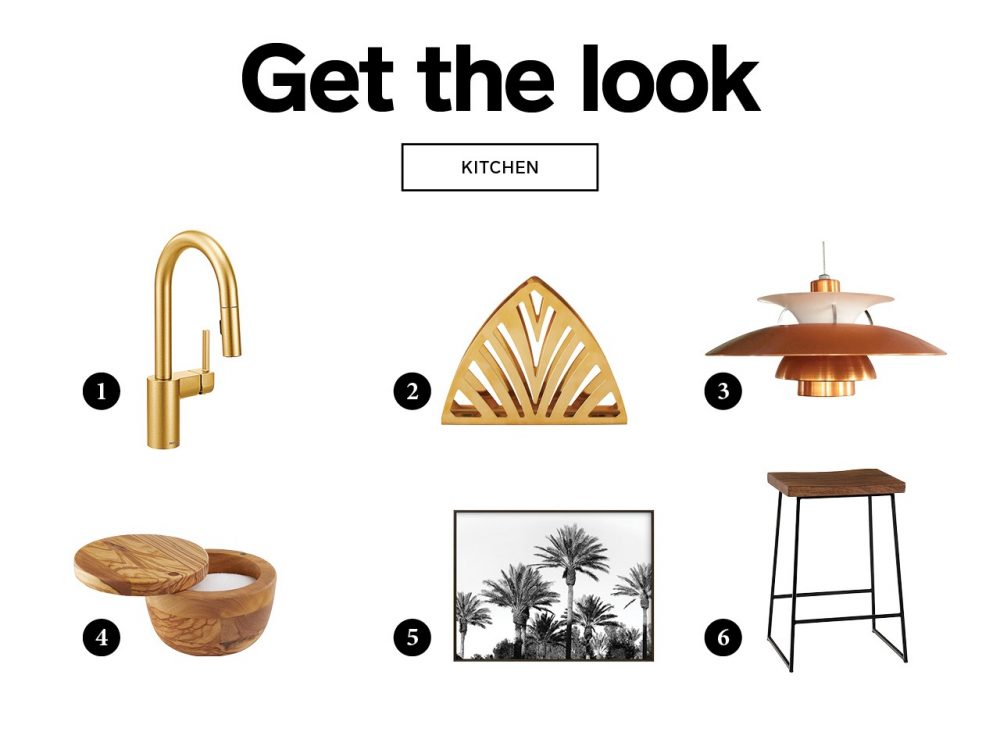 5. Laid Back Palms by Janelle Wourms, from US$21, Minted.