Why you should try something new this summer

I bought a bike last week. Not necessarily earth-shattering news, I know, but to me, it was a wheeee!-inducing part of my week. See, I haven’t ridden a bike around my city, Toronto, well…ever. 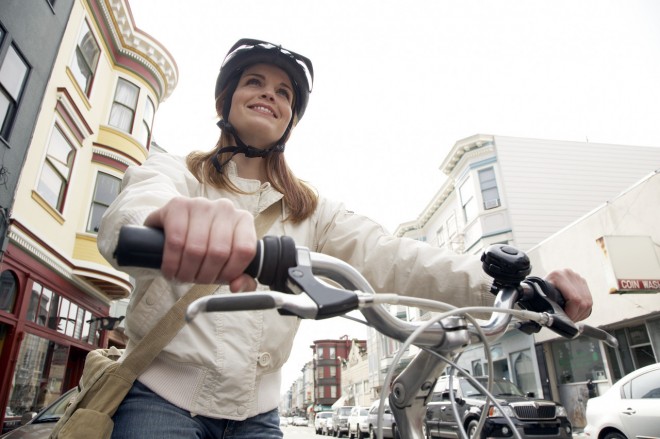 I bought a bike last week. Not necessarily earth-shattering news, I know, but to me, it was a ‘wheeee!’-inducing part of my week. See, I haven’t ridden a bike around my city, Toronto, well…ever. I moved here when I was 18 from my hometown where I rode everywhere but at the time the prospect of cycling around T.O. just scared me too much and I haven’t thought much about it since.

That is until lately, when my two children were circling our sidewalks on their bikes and begging that I get a bike too. So with visions of family bike rides dancing around in my head, I obliged and fear be damned, I’m riding a bike again, this time in a city about 20 times the size of the one I grew up in.

The result? I wasn’t kidding about that ‘wheeee!’-inducing. That was the thought flying through my head as I toured around my block a few times, grinning with freedom and flight. That little trip gave me enough confidence to take out a mountain bike over the weekend at an annual reunion, where I followed my sister-in-law, nephew and later niece, on a few rides. Love this! I thought, even after I returned home with a slightly sore saddle butt.

My happiness with rediscovering cycling seems to be on note with the new pursuits of happiness I’m sensing lately in people in my life. My son, for instance, has taken up soccer for the first time and despite the 30-plus-degree heat, he tells me repeatedly how much he loves it. And then there was Tuesday night, when I headed out to see a friend and executive editor Sandra E. Martin of Chatelaine’s sister magazine Today’s Parent, perform at a League of Rock show. League of Rock, a 10-week rock band boot camp-style experience, had Sandra up there performing three songs with her newly formed band…something she hadn’t done since her school choir in grade eight!

“Aside from the elation of hearing your friends call your name, the applause and the adrenaline rush — which, yes, made me feel happy — I loved the feeling of accomplishment that came with that night,” says Sandra. “Even though I love to sing, and sing all the time, I had to learn a couple of songs outside my comfort zone.”

And maybe that’s it. Perhaps when we push outside of that sometimes too-comfortable zone, we hit on a new source of happiness in our lives, one that lasts past the novelty stage. What about you? Tried anything new that’s made you giddy happy lately?