The wife of Rolling Stones front-man Keith Richards and former supermodel, opens up about the importance of family, her battle with cancer, and starting the label Hung On U 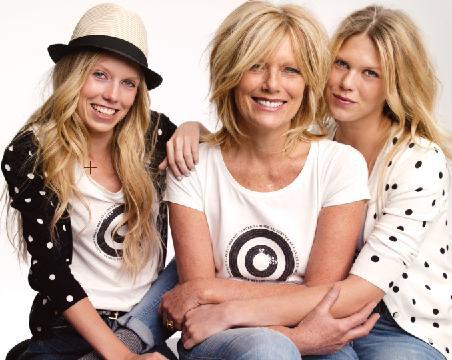 Look at any photo of Patti Hansen and her Rolling Stones husband, Keith Richards, and the contrasts between the two are as apparent as their mutual adoration. She: strong, sunny, radiant. He: the man whose infamous comment about snorting his dad’s ashes was not actually unfathomable, given the source. If you were to place bets on which half of the couple would be targeted by cancer — not once but twice — the smart money would not be on Patti. But unpredictability is one of cancer’s cruellest traits: It attacks the young, the kind, the recently wed, the new mom, the marathoner. No one is immune, not even Patti Hansen.

Former supermodel and Studio 54 regular Patti discovered this first-hand in 2005, when a mammogram picked up on some calcification in her breast. The reality hit her hard. “I was, like, ‘Okay. I’m one of those people now.’ ” After a biopsy revealed it was the beginning stages of cancer, Patti’s doctor suggested a lumpectomy.

A year later, Patti noticed blood in her urine. Within a month, doctors had identified a mass in her bladder, and she began chemotherapy. Three months later, she had her bladder removed and a new one fashioned out of a part of her intestine.

Patti, who once regularly graced the covers of Vogue and Glamour, met Keith at Studio 54 in 1979. (Rumour has it she had no idea who he was at the time.) They married four years later, on his 40th birthday, and had two daughters, Theodora and Alexandra, soon after.

Fast-forward 32 years. Patti arrives at the Chatelaine shoot for Fashion Targets Breast Cancer in perfectly casual, laid-back style, clad in dark-brown pants that at first look like jeans but are, of course, rock-’n’-roll leather, and a slouchy V-neck sweater. She’s effortlessly cool and incredibly warm, greeting everyone with a beaming smile. Her look was, and still is, that of the quintessential all-American beauty: tall, athletic, tanned and freckled, with shaggy blond hair. She laughs about her glory days of modelling, when famed fashion photographers like Arthur Elgort, Helmut Newton, Patrick Demarchelier and Richard Avedon were going wild for her Amazonian looks — at five foot nine and 130 pounds, she was relatively curvaceous. As she told Vogue, “I was busting out of those clothes. The editors would say, ‘Oh no! The collections aren’t fitting Patti!’ I loved when boyfriends would call me their Amazon girl. I never wore flats: the higher the shoe, the better.”

Her daughters now live the model’s life she once did — flying around the world and stomping down runways. Telling her girls, now 24 and 26, about her diagnosis was hard, Patti says, even though “they aren’t babies anymore.” What’s frustrating is the fact that they both smoke — something that Patti herself hasn’t done for 26 years but still blames for her cancers. “You’d think they’d stop because of all the cancer in the family.”

Patti, the youngest of seven children, is the sole matriarch left in the Hansen clan. She was brought up in a tightly knit, second-generation Norwegian working-class family in Staten Island, New York. Ten years ago, her sister Beverly died at 56 of complications from esophageal and lung cancer, and her only other sister, Barbara, also died of lung cancer, at 65, right after Patti’s own surgery. The family is extremely close: Theodora and Alexandra are best friends with their cousins, and their utter adoration of Patti and each other is evident, and very enviable — it is what every mother dreams of. They are respectful of Patti and have an easy familial banter, finishing each other’s thoughts and sentences.

When she told them about her diagnosis, “they were angry,” says Patti. “They said, ‘See, Mom, you take such good care of yourself, and look at you!’ They couldn’t understand how I got cancer, because I eat well, I exercise, I do all the right things.” Despite her diagnosis, Patti refused to feel like a victim. “I just really felt like a number. We’re all touched by someone with cancer; the statistics are so high that when I was diagnosed it really wasn’t a shock to me.”

While telling the girls was difficult, telling her husband was even harder. Married to Patti now for 27 years, Keith had a difficult time accepting the news and the treatment it demanded. “I had to take care of him,” says Patti. “I knew I had to get better because he was depressed. He was really sad. He had a hard time, but the love gets so strong. I knew: He needs me. He needs me around.” Patti is the rock of the family. She muses that her marriage to Keith has survived through all of the years and the ups and downs because they share the same working-class roots and values. “I cook for him; I do a lot of stews. Right now, we’re doing a lot of crockpot cooking. It’s just the two of us at home.” Turns out the bad boy of rock ’n’ roll’s most enduring band, famed for taking top spot on the Who’s Likely to Die List for 10 years straight, likes his creature comforts. But when they started dating, Patti’s family and friends were deeply worried. “One of my gay friends said, ‘Don’t do it! Don’t go. Don’t go, Patti.’ I said, ‘I’m going; this is great.’ And I was up with him for five days straight. . . . We were in a car, we went to apartments, we went to Harlem looking at record shops. I remember the fifth day, when I finally started seeing things flying,” says Patti in Keith’s memoir, Life.

Somehow, even after a very stormy introduction to her family, which ended with a completely plastered Keith smashing his guitar on a table while Patti was sobbing upstairs, they managed to stay together. Keith had fallen madly in love with her, he wrote in his diary entry excerpted in Life: “Incredibly, I’ve found a woman. Unbelievably, she is the most beautiful (physically) specimen in the WORLD. But that ain’t it! It certainly helps but it’s her mind, her joy of life and (wonders) she thinks this battered junkie is the guy she loves. I’m over the moon. . . . I’m kicking 40 and besotted.”

Keith and Patti were married in 1983 in Cabo San Lucas, Mexico, and the girls were born soon after, a year apart. Keith thought he was done with fathering, having had Marlon and Angela with actress and model Anita Pallenberg, “We’ve done it and we’ve made it. No more diapers,” he says in his book. “But no! Here comes another one. Her name’s Theodora. And then a year later another one, Alexandra. Little T&A. And they weren’t even a gleam in my eye when I wrote that song.” They all lived on the beaches in Antigua and Jamaica in the sun for the first few years of the girls’ lives, until they had to go to school. Then the family moved back to New York while they built their house in Connecticut, where they’ve stayed ever since, in a big, beautiful place tucked down a leafy lane about an hour from Manhattan. (Keith nicknamed the house Costalot, thanks to all the bedrock they had to blast to build the foundations.) Together, they struggled through the effects of the chemo. (“It’s exhausting. I mean, I was feeling like shit. Chemo is just debilitating,” Patti says.) The couple stayed cocooned in their Connecticut home, making stews and watching movie after movie together. “We watched a lot of happy movies, old movies. Miracle on 34th Street. Tim Allen [movies],” she says. “Corny humour. I like corny humour.”

One potential chemo side effect that Patti was relieved to avoid was the loss of her hair. “I was preparing myself. I took Theodora with me to some wig place, and I looked at her and I just started crying. It’s a big thing for a woman. I play around with wigs every New Year’s Eve, and I thought, ‘This will be fun.’ But the reality of it . . . it’s a heavy moment.”

Now cancer-free, Patti focuses her energies on her newest project: resurrecting a bag that a late friend had designed in the ’70s. “He was giving it to all the models at the time. My daughters found mine in my closet, and they were wearing it and I went, ‘Wow, that looks great.’” Patti started wearing the simple cross-body black-suede bag everywhere, including on red carpets. “My girlfriend said, ‘I used to have that bag too! Let’s do something with it, because it’s so fabulous, and mine’s ripped and shredded and lost.’ ” Together, they recreated the bag in different sizes and fabrics for a label they named Hung On U. “Our price points are from $30 to $400 — from nylons and leopard-print to suedes and leathers — and we have them in three different sizes.”

Patti’s other project is to get women talking about cancer, a fight her girls are passionate about as well. “I mean, the word cancer is scary in its own right,” says Alexandra. “I think talking about it is like talking about a monster you’re going to attack. Being vocal is the best thing that you can do: It spreads the awareness, which brings the money that’s going to go into the research that maybe one day is going to come out with a cure.” Patti agrees with her: “I’m an advocate for going for your mammograms, going for your checkups, doing your self-exams. We must do the best we can with the bodies we’re given.”