I can't believe I had a heart attack at 39

Kerrie Lee Brown suffered a major health scare at 39. Denial caused her, like many women, to miss the warning signs. Here she shares what she wishes she’d known, what recovery has been like — and why she’s speaking out to help you dodge the mistakes that could have cost her her life. 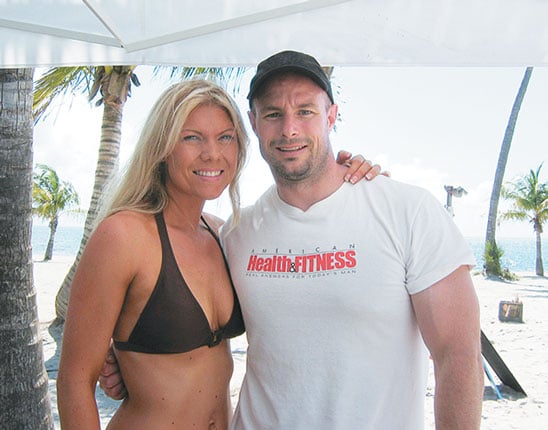 Kerrie Lee Brown and her husband, Craig, hanging on the beach in Miami when she was the editor of the fitness magazine Oxygen.

When I think back to last January I always come back to one nagging thing: If only I’d felt that pain in my left arm, not my right. Don’t doctors say pain on the left is the one to worry about? Pain on your right isn’t talked about enough.

The noticeable symptoms that led to my heart attack had started weeks earlier. Just before Christmas, and on and off for about a week, I felt a tightness in my chest that I’d never had before. It was like someone was squeezing my ribs into a smaller and smaller belt. I constantly had the
urge to lift my shoulders, pull them back and take a deep breath — as a way to release its reins from around me.

I knew the feeling was foreign, but I just chalked it up to holiday stress. It was Christmas, after all. My husband and I were hosting our extended family for the first time, and our two boys were keeping us busy with hockey practices, school events and other sports. I’d also recently started an exciting new job at Today’s Parent, one that built on my previous experience as the editor of the fitness magazine Oxygen, and we were working long hours on new projects. In short: There was a lot going on.

Once January hit, things seemed to return to normal, at least temporarily. I went back to work after a nice break and settled back into my regular routine. Then within a week or two I started getting severe headaches. I also noticed that I got winded more easily than usual and felt tired all the time. A few days later, I had what I thought was a massive panic attack while standing in the cafeteria line at work.

Still, alarm bells didn’t go off — not even when my heart began racing so fast that I could literally see my chest pounding. I recalled I’d had similar “episodes” occasionally as a teen but never thought much of it, because it happened so infrequently back then that the teenage me shrugged it off as hormones or nerves.

The day it happened
On January 30, 2013, my world changed forever. I was getting the kids ready for bed when I had the most horrific feeling. It was a sharp pain in my right shoulder that shot all the way down my right arm. It felt like a hard impact — as though someone had whacked me with a baseball bat. Then it trickled around to my back. I immediately ran downstairs to my husband, eyes welling up with tears. The pain was unbearable, and my arm was starting to feel limp. Panic-stricken, he asked if he should call an ambulance. I screamed “No!” because it was my right arm. I kept saying, “It’s not my left arm! It’s not my left arm!” I figured the pain was a pinched nerve caused by a massage I’d had a couple days earlier.

After that an overwhelming feeling of exhaustion hit me. It was only 8 p.m., but if I’d stood there any longer I would’ve fallen over from fatigue. The room was swirling. Of course, I realize now all these events were linked, and I should have gone to the hospital immediately. But it never occurred to me it could be a heart problem — what I felt didn’t line up with the typical signs of a heart attack. And as a health and wellness journalist, I knew my lifestyle wasn’t high risk: regular exerciser, yoga lover, healthy eater, never smoked and no immediate family history of heart disease. And besides, I wasn’t even 40.

That night, I couldn’t lie on my back in bed because of the pain. Still dizzy, I got up at 2 a.m. to search the internet for my symptoms, which only confirmed that it could’ve been a variety of things. In the morning my husband joked that he’d checked on me several times through the night to make sure I was breathing. I felt a bit better (I even went into work that day) but still felt a nagging pressure under my right arm and on the right side of my chest. Over the next few days the pain faded, but the shortness of breath and heart palpitations did not.

Finally, after some major urging from my mother, I went to see the doctor, who immediately sent me for a stress test (an echocardiogram), an electrocardiogram (ECG), blood work and an ultrasound. She also put me on blood-thinning medication. A week later, tests confirmed the worst: I’d had a heart attack, and there was a possibility of further issues. As my doctor gave me the bad news, she handed me a box of tissues. It was Valentine’s Day.

The missing link
After more tests I learned that my heart wasn’t permanently damaged and could be repaired. While I was thankful, I was also frustrated because nobody could explain why my heart was letting me down.

Tests eventually revealed that I had a pre-existing heart condition called paroxysmal supraventricular tachycardia (PSVT), a congenital defect that causes the heart to beat rapidly during times of stress or exertion. It’s like my heart shifts into overdrive without warning and acts like I’m running a marathon. Unlike a typical heart attack, where the blood supply is cut off by a blockage, the PSVT scenario results from excess demand for blood that the body can’t meet.

All of a sudden a light bulb went on, and those few brief racing-heart experiences I’d had when I was younger made sense. I felt grateful for a concrete diagnosis, but I still needed reassurance that my body wasn’t a ticking time bomb. What could I do to prevent more attacks? My doctor recommended I give up caffeine and reduce “stressors,” both of which cause the heart to beat faster. Caffeine is an easy fix (I now drink decaf coffee), but pinpointing my life stressors? Wow, that’s tough.

I’m a career-loving mom, with a long daily commute to the office; I have two boys busy with sports, lots of friends and personal commitments, and I’m even (perhaps ironically) writing a book about work-life balance. Any of these could’ve been the stressor, but I didn’t want to believe it. I’ve always considered myself the type who thrives under pressure.

I decided to see a naturopathic doctor, Dr. Tanya Lee, at the Health Centre in Milton, Ont. She gave me a comprehensive treatment program, which includes herbs, vitamins and other natural remedies.

Now I take magnesium at night, omega-3 fish oil in the morning and a customized botanical tincture of motherwort, hawthorn, lily of the valley, and vitamins B6 and D twice a day. This special combo is meant to strengthen the heart muscle, ease inflammation and regulate heartbeat. My cardiologist also put me on beta blockers, a common medication that controls heart function by decreasing heart rate and lowering blood pressure.

Focusing on the future
It’s been almost a year since I first noticed symptoms. Even today, I still can’t believe what’s happened, it’s been such a huge wake-up call.

Outside my immediate circle of friends and family, I confided in Andrea Nair, a psychotherapist I’d met through work. We talked a lot about the incident and how I was working through it in my mind.

“Why was your heart breaking?” she asked me over the phone one night after I put the kids to bed. I couldn’t answer right then, but I did, eventually, come to my own conclusion. Beyond the obvious mechanical reason, I believe I put so much pressure on myself to do it all, to be a superwoman in all aspects of my life, that my body finally said no.

It’s still hard for me to accept that I need to slow down once in a while. I’m living proof that stress is a serious issue. (If this can happen to me, it can happen to anyone.) I remain determined professionally, but I’ve learned taking care of me is more important than any promotion, new job or new connection.

I continue to see a naturopathic doctor and cardiologist regularly, and to meditate daily. I go for massage and reflexology at least once a month. I make a point of eating better, drinking more water and taking my supplements.

Overall, I try not to sweat the small stuff. I’ve gone away for the weekend alone to rejuvenate and even missed a couple of my son’s hockey games (guilt-free!) to catch up on sleep. I guess you could say I’ve done a lot of soul-searching — and I realize a successful person is not necessarily a busy one. My perspective on life has changed. And I’ll never ignore any pain, ever, ever, ever! again.