Here to promote her new book Sexy Forever: How to Fight Fat after Forty, the Three's Company actress shares her thoughts on menopause, organic food and feminism 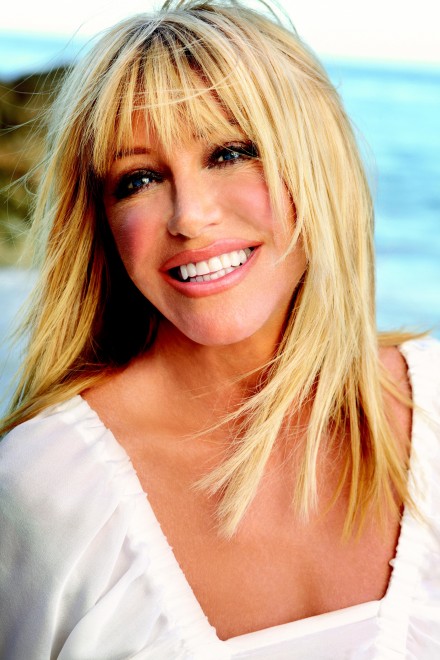 Sexy Forever: How to fight fat after forty is the latest book from the ever controversial Suzanne Somers. Originally made famous by her role as Three’s Company’s ditzy, blond Chrissy Snow, and then furthering her appeal with the Thigh Master as she prompted men and women alike to “squeeze, squeeze your way to shapely hips and thighs,” Suzanne has gone on to build a health and fitness empire including books, DVDs, dietary supplements, cooking tools and many more fitness-focused gadgets.

But while she champions female health and the fight to stay “Sexy Forever,” Suzanne has run into quite a few critics. In 2009 she appeared on the Oprah Winfrey show discussing her use of bioidentical hormone replacement therapy (BHRT) to treat her postmenopausal symptoms. The appearance was met with a sea of criticism from the likes of Newsweek and Salon.com. Chatelaine.com recently met with Suzanne during the Canadian leg of her book tour and asked her a few questions about how she’s choosing to fight the aging process:

How does that connect with weight gain? Imbalanced hormones are a big factor in why women are fat, and when women get fat they get very unhappy. Especially because we feel like our bodies have betrayed us and we’re not in control of [them].

Is BHRT expensive? My bioidentical hormones are about 60 dollars a month. I know that’s a chunk of change in this economy but in the big picture, it’s a lot more expensive to be sick. And little by little you can return to a more natural way to live.

I am not reproductive, I no longer have any eggs—menopause should be called egglessness rather than menopause—but my brain, if it were to assess my body, thinks I am because I replace my hormones, in a rhythm, just like [in] my optimal healthy prime; I cycle, I add in progesterone just the way my body used to. I’m just mimicking the way my body used to make it.

Your book also suggests that weight gain is connected to the environment? I’m not genetically thin, I’m not genetically programmed to look young. If you look at my family you’ll see that. So you start with assessing your house and the way you live and what you clean with. And you don’t have to do it all at once. But next time when you run out of laundry detergent, why don’t you walk over to the “green” department? When you run out of your skin care, why don’t you go to the organic section and get organic shampoo? Because when you shampoo your hair, your pores are open from the steam and the heat, and you’re putting chemicals right near your brain. And understand there’s a tipping point. At what point do the over-the-counter pain killers, the pharmaceutical anti-depressants, the sleeping pills, the pesticides on the foods, the cleaners you’re using in the house, the cosmetics that you’re using, the blood pressure medicine, the anti-anxiety [medication], at what point do you get choked and your liver says: I give. And you now are in the category of the sick and the overweight. I’m saying that understanding there’s a tipping point means that you can start stripping away at all those things I just mentioned.

Are there other practical things we can do at home to get healthier? Next time you buy a mattress, go look at the organics; you might even sleep better without chemicals. Next time you go to buy food—if you can’t afford organic food I totally understand—here’s a list [in the book] of the least toxic in terms of sprays; here’s a list of the most toxic and what you should never eat if you can’t afford organic; here’s how to wash it and soak it and the amount of time so that you can remove the toxins. If you can grow some of your own food, then grow it—it’s really very satisfying. Spend a little money on taking a blood test to find out your hormone levels and understand that you can replace your hormones with bioidenticals.

Why do you think people are so critical of your support of BHRT? One of the things that’s been interesting in my career is that I was fired as Chrissy Snow for asking to be paid what the men were being paid and [Chrissy’s] packaging wasn’t right to be the first feminist. (Laughs) So yeah, I feel that I’m alone out there [discussing BHRT] but proud, I feel very proud. I’m actually very glad to be interviewed by this magazine. I rarely get interviewed by women’s magazines. I get interviewed by health magazines, but [women’s] magazines are rarely to never, and I’ve always wondered why. If there’s ever been a champion of women, it’s me. I’m trying to make us feel good and I don’t have an agenda and I don’t sell hormones. Some women have really been helped by bioidentical hormones and I think that I’ve had a lot to do with putting it on the map.