I Met My Husband The Love is Blind Way. Sort Of

Participants have a week of speed-dating to get engaged to a relative stranger. It sounds a lot like my own engagement. 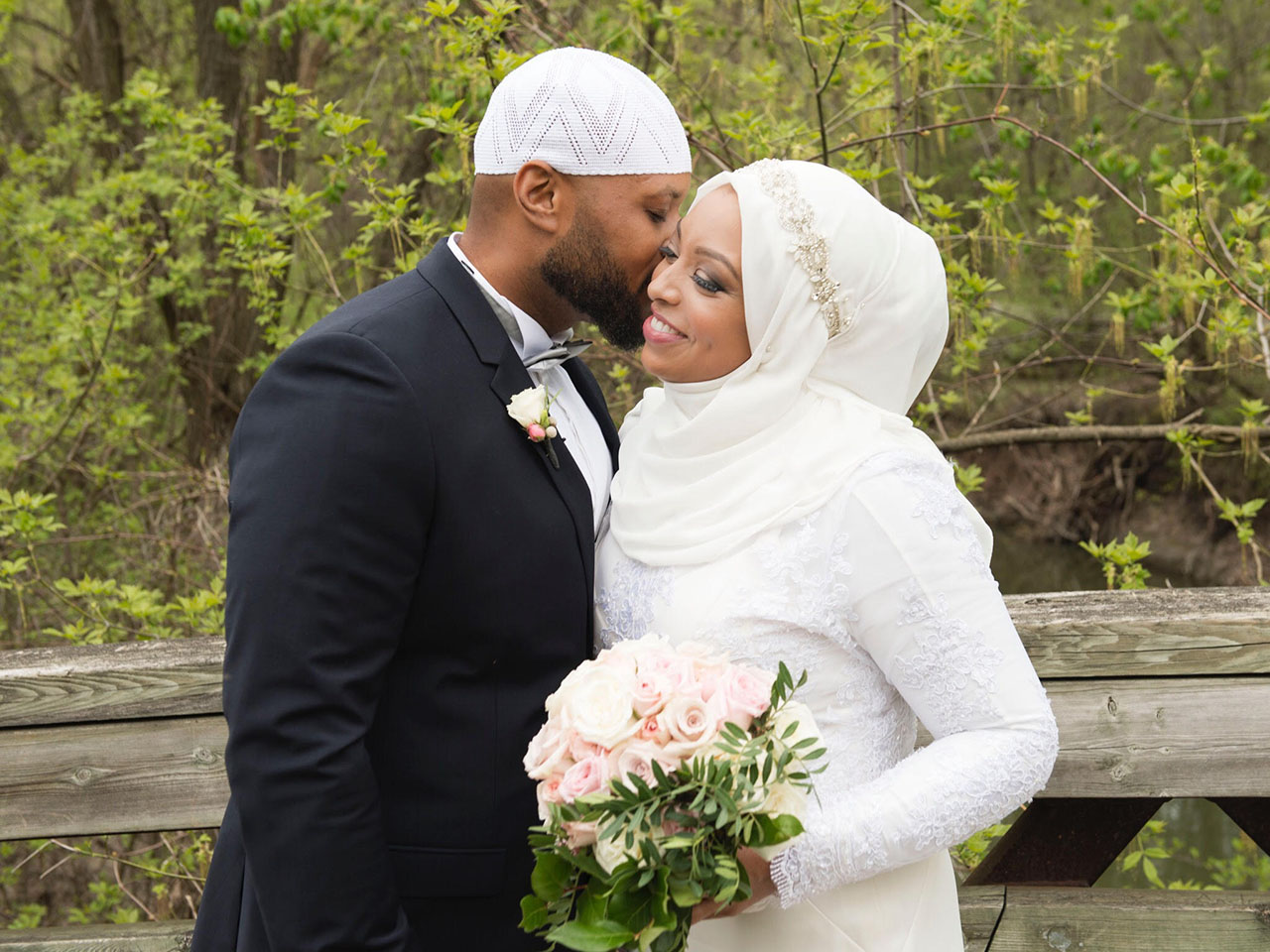 Ginella Massa and her husband at their wedding in 2018. (photo: Robin Kuniski)

By the end of our first date, my now-husband and I both knew we’d met the person we wanted to spend the rest of our lives with.

We had only met the week before, and not in person: the first part of our relationship happened over the phone. Those initial conversations went way beyond the usual “what’s your favourite movie?” or “what kind of food do you like?” We tackled big issues from the get-go: where we wanted to live, how many kids we each wanted, and our general expectations of a partner. That immediate honesty opened the door to a deep emotional connection, allowing us to share our deepest secrets, our hopes for the future, and our biggest fears. By three weeks in, we had already said the “L” word.

So the premise of the Netflix series Love is Blind didn’t seem all that crazy to me. If you haven’t been sucked into binge-watching the show that has taken the internet by storm, you’ve probably at least heard of it. The dating experiment brings together 10 men and 10 women who claim to be ready to find forever love, and gives them just a week of speed-dating to connect with and get engaged to a relative stranger.

The twist: during the literal blind dates, each person is in an enclosed “pod,” able only to hear the other person. Couples don’t see each other or physically interact until after one has proposed and the other has accepted. After the engagement, they live together for just three weeks before walking down the aisle, where they ultimately decide whether to say “I do.”

The usual reaction that I get trying to explain the concept to someone who hasn’t watched the show is that it sounds absolutely ridiculous. To me, though, it sounds a lot like my own engagement.

Like the couples on Love is Blind, my husband and I were introduced solely for the purpose of considering marriage. It’s common for many modern Muslims, for whom the road to matrimony looks something like this: upon reaching an age where you’re ready to settle down and start a family, you put the call out to family, friends and even community matchmakers, who might suggest suitable matches in their networks.

In my case, I was introduced to my now-husband after my mother ran into an acquaintance at our mosque who had heard that I had become Canada’s first hijab-wearing TV reporter and wanted to congratulate her.

“Yes, we are really proud of her,” my mother replied, before jokingly adding, “now we just have to find her a husband!” That acquaintance is now my sister-in-law.

Unlike the couples on Love is Blind, I did get to see my potential spouse’s photo before deciding to pass along my phone number. But just like the TV couples, my husband and I secured our initial bond in only a few conversations. So as I watched sweet Lauren and quiet Cameron profess their love for each other after only a week (during which they’d never seen each other), I knew many viewers must be rolling their eyes, but I wasn’t.

As Muslims in a Western society, our methods of meeting and marrying are often met with incredulity and criticism. Most people my age are dating casually, moving in together and then considering whether they might want to permanently fuse their lives. Our traditions are often seen as backward, and trying to explain my relationship to my non-Muslim friends and colleagues was admittedly difficult. I ended up telling most people that we were “dating” and that he was my “boyfriend” because those were ideas they could wrap their heads around, even though neither was really true. The experience was more like a 15th century courtship: while there were no chaperones involved, our dates were always in public spaces like restaurants, coffee shops and parks. And we were only talking—as with many religions, in Islam physical intimacy is typically reserved for after marriage. That piece of info often made people’s heads spin, so I kept it mostly to myself.

The man who is now my husband wasn’t the first person I had been introduced to in this way. I had been set up with many eligible bachelors in my twenties, but no one ever made it past a third date. Some wanted me to be a stay-at-home mom, others expected me to move to another city. Some didn’t have career prospects or a stable job. I was happy with my life—I had a successful career, a full social circle, and I was living on my own, financially independent from my parents. I didn’t need a man to complete me. I wanted someone who was going to add to the life I had already built.

What I loved about the way my husband and I got to know each other is that all of our cards were on the table. A relationship based purely on conversation meant we let our guards down and had to be honest with each other about what we needed in a partner. And he checked all the right boxes right from the start. He was incredibly selfless, quietly confident, and wasn’t intimidated by my ambition and outgoing personality.

When we finally did meet in person, I thought that he was even better looking than in his photo, although maybe that was because I’d already fallen for his personality. And by the time he presented a ring, our families had already met and approved of the union. His official proposal came eight months after our first date, but truthfully we knew we were ready a lot sooner. We were really just letting an acceptable amount of time pass so people wouldn’t think we were rushing into something crazy. As I watched Love is Blind, I could relate to Barnett and Mark as their friends and family eyed their new fianceés, Amber and Jessica, with skepticism—I fielded those same dubious looks from friends and colleagues when I announced my sudden engagement.

Our ideas of what is normal, in romance and otherwise, is very much shaped by media. I’m thankful that a cheesy reality program has shown that love can happen in different ways, and that what might seem unconventional can actually be successful. I believed the participants when they said they were able to forge an unbreakable bond with a stranger in just days, in part by removing the distraction of their looks or their skills in bed. They got to know each other on the inside first, which often made them feel especially connected when they finally got to interact physically. The final reunion episode revealed that some couples are still married more than a year after their TV weddings, and one couple that didn’t tie the knot is still dating. Even the Love is Blind producers eventually revealed that they were shocked by the show’s results, telling contestants they were expecting one or two engagements, but got seven.

Of course, there is no foolproof way to ensure marital success. Many people, from every culture, end up in marriages with the wrong person. There are family pressures, societal expectations and, for women, constant nagging to mind our biological clocks and marry a nice doctor who comes from a good family before it’s too late.

It’s a scenario we saw play out in one of the most entertaining (and infuriating) storylines on Love is Blind, when 34-year-old Jessica admits that she ran into the arms of a man she knew wasn’t right for her because the one she wanted chose someone else. She just didn’t want to be alone. Another sad story was that of Carlton and Diamond, for whom a major omission in early conversations, along with the inability to let go of ego, derailed something that could have been beautiful. What the show proved is that honest communication, vulnerability and humility are key to building a strong foundation for a relationship.

The sooner you can be your true and honest self with your potential partner, the better your chances of success might be. I wouldn’t change anything about the way I met my husband. So far, it’s worked out for me.