In search of a super orgasm that really clears the cobwebs? Look no further. 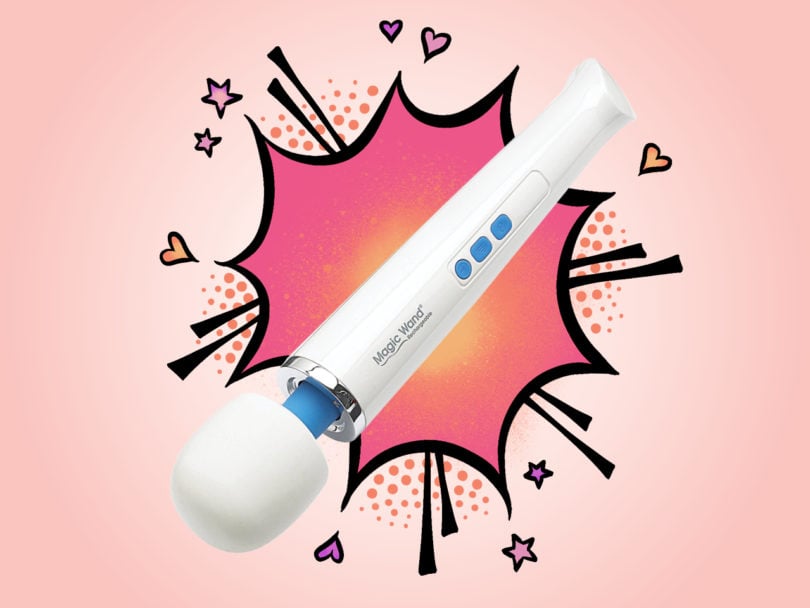 For my 43rd birthday, I got the present to top all presents: an instant orgasm machine. My husband bought me a Hitachi Magic Wand, the legendary two-speed “back massager” that’s been used on other body parts, to great effect, since it was first released in 1968. I’m no vibrator virgin—I have a very close relationship with my Lelo Gigi—so I can’t believe it took me all this time to discover just how earth-shatteringly, mind-numbingly, toe-tinglingly amazing the Magic Wand is. I’ve seen them discussed in internet forums and on the shelves in sex stores my whole adult life (one of my first retail jobs was in an upscale adult store), but I always thought they looked a bit scary.

Let me give it to you straight: The Magic Wand isn’t some cute and discreet thing that fits in the drawer of your bedside table. (I’ve got mine shoved in behind a pile of sweaters on the top shelf of my closet.) It’s big and industrial looking, like a drill or a miniature version of something used to extract crude oil from the ground. Until very recently, the only option available required that you plug it into the wall. But none of those things matter once you try it.

Before you do, please note the Magic Wand is used differently than a lot of other vibes: you don’t insert it anywhere, but instead just hold the massive round vibrating head against your lady parts. The vibrations are so strong that you don’t even need to put it directly on your clitoris, just in the near vicinity. You’ll come off at an almost alarming and intense rate—I’m talking a minute or two, tops.

As for the resulting orgasm? It’s intense. Incredibly intense. Like a super orgasm. One that really clears the cobwebs. But don’t just take my word for it. One highly satisfied Reddit user, on a long and glowing thread about the Magic Wand, describes the orgasms it produces as “angry” and I get it; there’s no slow build-up, no “I’m coming… I’m coming.” Instead, it’s more like, “Holy shit, I just came.” This perhaps isn’t the orgasm you want every single time you’re feeling horny, but when you just want the job done, this is how to do it. It’s the mechanical equivalent of a quickie.

Because the Magic Wand is so intense, sex educator Rachele Manett, who works at sex-positive shop Venus Envy in Halifax, says it can also be a hugely helpful tool for folks with decreased sensitivity or decreased libido (something that is common as women get older and our estrogen levels drop). “It can be something that is really helpful to sort of speed things up and rev things up. Sometimes it’s hard to get in the mood and kissing isn’t necessarily going to do that,” she says. “You can use it over clothes, or run it up your legs and still feel those rumbly vibrations, you can even feel it through a pillow.” (She also notes that the rechargeable model is just as powerful as the corded one, something I wish I had known before my husband bought mine.)

As for any concern that the turbo oomph of the Magic Wand might just be too powerful? “My gynecologist colleagues tell me that it’s simply not possible to experience desensitization or hypersensitization as a result of vibrator use,” says Dr. Lori Brotto, director of the UBC Sexual Health Laboratory in Vancouver. “You would have to be directly stimulating the clitoris for hours and hours for that to happen.” The thought of doing so with the Magic Wand is honestly too much to handle. (So is the thought of using the vibe’s stronger #2 setting, which I can’t deal with for more than a few seconds.)

You may be wondering what my husband got out of buying me such a powerful sex toy. Admittedly, after we used it for the first time, he quipped that he might as well just leave the room. But, we’ve since found that using it together is pretty awesome. Being penetrated while holding the Magic Wand on my general pubic area is explosively good, and the vibrations are so strong he can feel them too. I mostly use it when we’re together, barring the odd bit of near-instantaneous afternoon delight.

A Magic Wand is a fantastic present for yourself. If you have trouble getting off, this might fix it. If you have no trouble getting off but want to add a bit of zing to your sex life, this is the mighty toy to do it. As much as you can love an inanimate object, I’m in love with my Magic Wand. Buy one, and I’m pretty sure that after one two-minute session you’ll feel the same.