What You Should Know About The Coronavirus

How worried should Canadians be? 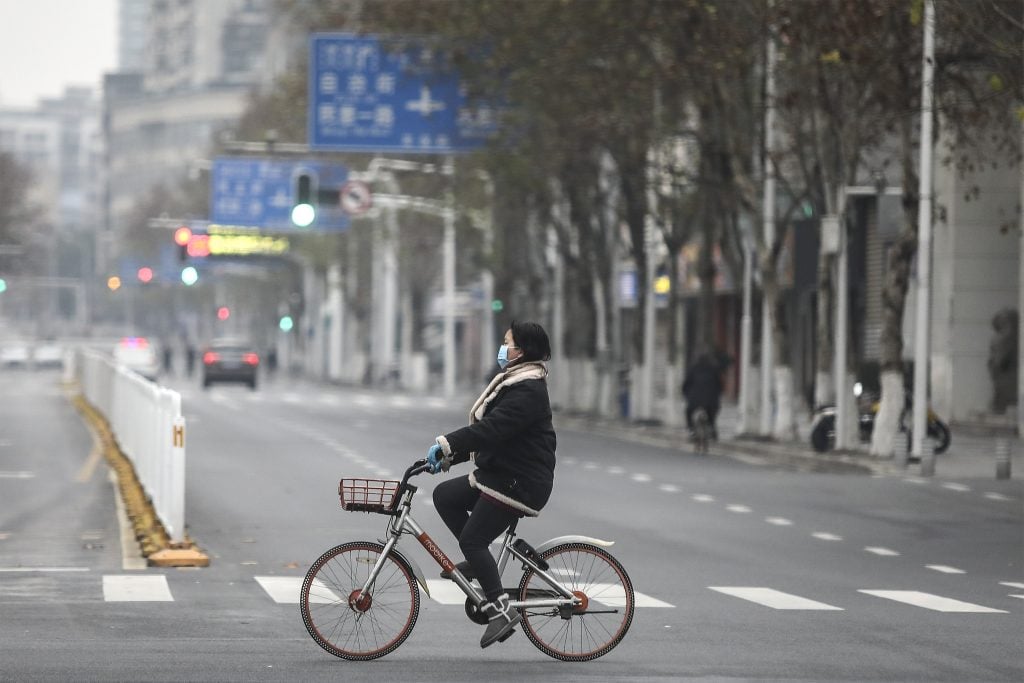 A woman wearing a protective mask rides a motorized bike on an empty road January 27, 2020 in Wuhan, China, where the new coronavirus is thought to have originated. (Photo: Getty Images)

With coronavirus officially declared a global health emergency after more than 200 deaths and thousands of confirmed cases in China—plus four so far in Canada—it’s no wonder worry is growing worldwide. But, says Isaac Bogoch, infectious disease specialist at Toronto General Hospital, this is a virus that should be put in perspective because the risk to Canadians is extremely low. Here’s what you need to know.

What exactly is a coronavirus?

There are actually seven coronaviruses that can infect people (coronaviruses are so named because, under a microscope, they look like they’re wearing spiky crowns). Bogoch says there is a spectrum when it comes to how serious they are. “At one end, you have the common cold, which is mild and self-limiting, and at the other end you have SARS and MERS, both of which are much more virulent, severe diseases,” he says. “This particular coronavirus (aka 2019-nCoV) is emerging somewhere in the middle.”

In fact, Bogoch says, there are probably hundreds of people with mild symptoms who don’t realize they have this coronavirus. From a clinical standpoint, it’s a tough one to diagnose. Symptoms include a headache, runny nose, sore throat, cough and fever—disconcertingly similar to anything you might suffer during a regular cold and flu season.

The CDC says symptoms can manifest two to 14 days after exposure. There is currently no vaccine to protect people from the virus, and no standard treatment other than managing the symptoms by getting rest, controlling fever and drinking liquids to avoid dehydration. The virus appears to be most dangerous in the elderly and in people with underlying health conditions.

What makes this specific coronavirus so unusual?

Bogoch says that the most concerning thing about 2019-nCoV is how quickly it has spread. The first confirmed cases were in Wuhan, China on December 31, 2019. “Within weeks it had spread in China and then disseminated internationally as people got on planes and landed with the virus,” Bogoch says. The virus has been found in at least 19 other countries, including Canada—but the vast majority of the nearly 10,000 cases of the new coronavirus so far are in China.

Conclusive evidence about where—and how—the outbreak started is lacking. One hypothesis: The virus could have been transmitted from animals to people. (SARS is believed to have originated in animals—possibly bats—before spreading to humans.)

Between people, the coronavirus is most likely spread by close contact with an infected person, especially if that person is coughing or sneezing. Just how contagious is it? At the moment, we don’t quite know, says Dr. Andrea Boggild, medical director of the Tropical Disease Unit at Toronto General Hospital and associate professor at the University of Toronto. “We do know that person-to-person transmission is occurring. At present, it’s thought that each case of illness subsequently spreads to more than one person, meaning that the outbreak has the potential to grow faster than it would if each case of illness lead to only one other infected person.”

For comparison, she says, each case of seasonal influenza leads to an average of 1.3 additional cases, while each case of measles leads to somewhere between 12 and 18 new infections. “It’s estimated that each case of 2019-nCoV is leading to 1.4 to 2.5 new cases, which is in the same range as both seasonal and pandemic influenza, but lower than for SARS,” Boggild says. “The more cases arising from each new case, the harder the outbreak is to control.”

What do we know about the cases in Canada?

There are three cases of coronavirus in Canada. The first is a man in his 50s who showed mild symptoms on a flight from Guangzhou, China, to Toronto on January 22. He has since been discharged from hospital. His wife, who travelled with him, is the second case.

A third case was announced in B.C. on Tuesday. Provincial health officials said the man had recently travelled to Wuhan and returned to Vancouver last week. A fourth case, in London, Ont., was announced on Friday in a Western University student who had also travelled to Wuhan. Public health officials told the London Free Press that the woman’s “illness was very mild. Recovery was very quick” and that her symptoms lasted just two to three days.

What can you do to protect yourself?

At present, the risk in Canada is still very low. But, in general, good hand hygiene—meaning frequent scrubbing with soap and water or using an alcohol-based hand sanitizer—is the best way to prevent any kind of infection. Meanwhile, respectfully covering coughs and sneezes with a sleeve reduces the number of virus particles in the air. Boggild also recommends wiping down frequently touched surfaces in your home, such as doorknobs, with a standard household cleaner.

Genetically, Boggild says that this coronavirus is about 80 percent similar to the SARS virus and that the lessons learned from the SARS outbreak in 2003, which killed 774 people worldwide—including 44 in Canada—are already being put into practice. “There is much greater global attention and response at an earlier stage to 2019-nCoV than there was with SARS,” she says. “And Canadian hospitals, health care workers and public health authorities are now better equipped to respond to new viruses such as this one, from knowing what types of protective equipment are needed to the best screening, isolation and testing protocols to use.”

How worried should Canadians be?

So far, the Public Health Agency of Canada says that the risk to Canadians and Canadian travelers from 2019-nCoV is low. While Boggild says that assessment of risk might change, Canadians shouldn’t be overly concerned. “People should go about their regular activities as they would during any seasonal influenza season,” she says. “That includes getting a flu shot and, if you do happen to catch a cold or the flu, staying home from work or school so as not to spread these germs to others.”

Bogoch adds that the severity of the new coronavirus still pales in the face of the flu—every year, more than 12,000 people in Canada are hospitalized and 3,500 die due to the influenza virus. “People get frightened in the face of uncertainty; it’s a natural response,” he says. “But we’ve faced this uncertainty before with SARS and this time we’re prepared for it.”