How to transform from a walker to a runner

Fitness expert James Fell shares his easy tips to transform yourself into the runner you've always wanted to be. 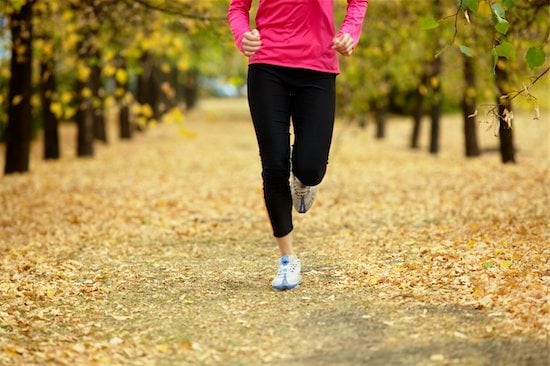 How to go from walking to running/Photo by Masterfile

I’ve talked to many people who never intended to be runners. They started off walking, and it just sort of happened. And it can happen to you.

We’re not down on walking. In fact, we’re huge fans. I know one woman who lost 70 pounds mostly because of walking and the dietary changes this led to. But if you’re game to try, there are reasons to persevere. Let’s cover those first.

2. Running suppresses appetite
That stuff about working up an appetite – at the physiological level, at least – is a farce. Psychologically you may feel like you earned a food reward, but in reality, intense exercise suppresses appetite. Walking, unfortunately, does not do this. It takes some good, intense effort to get the hormonal effects of decreasing your desire for food. Weight loss comes from your diet, and running can lead to better control over what you consume.

3. Running saves time
It’s pretty simple. If you only have a short amount of time, you can burn more calories and have a more profound effect on your health if you’re running versus walking. Again, walking is great, but running is better.

Now let’s look at how to make the transformation.

Rule #1: Slow and steady
You may be thinking you can’t be a runner because it will damage your joints. There are cases of joint surgery or arthritis where this may be true, but running is actually protective of joints. It doesn’t wear them out if you push at a reasonable rate. Push too hard however, and it could cause you some pain.

When I first started running I had a decent cardiovascular fitness level from being a regular weightlifter, and I was able to run over three miles my first time out. Needless to say I was a “James-shaped” bag of pain for days afterwards. Everything, from my elbows down, hurt. Foolishly I did the same thing a few months later, and I hurt again. The third time I finally decided to run only one mile, and added only a quarter of a mile each week. Over time, I worked my way up to some long runs, and last year finished my first marathon.

Rule #2: When you go for a walk, dress to run
Go to a running-specific store and get the right gear. Shoes are the most important part, and I can vouch that those expensive running socks are worth the cost. You can buy extra gear like tights for cold weather, running shorts, breathable tops because having the proper gear boosts your self-confidence and makes you feel like running. Put all this stuff on and then just walk. Before long, you’ll feel like quickening your pace.

“I tried running but it just hurt too much,” says Jen McKinnon, a mother of four in Calgary. “So I just kept walking and it just kept getting longer and longer. Then I started running bits and pieces during my walks, and now I’ve got my first 10 kilometre race coming up.”

Anna Mae Alexander, a 29 year-old Calgarian says, “As of three years ago I couldn’t walk,” referring to having polymyalgia rheumatica. “I started controlling it with foods that were less inflammatory, then began walking. I worked my way up to doing the 60 kilometre Weekend to End Breast Cancer [walk], then registered for a ‘Learn to Run’ program. I’ve done a few five kilometre races now.”

Rule #4: Sign up for a race
Once you get just a little taste of the running bug, nothing helps set it on fire than registering for a race. It can be as short as a five kilometre race, and you don’t have to be fast, but having that scheduled commitment will keep you going.

Have faith you can do it
Many say they’re too overweight to run, but that didn’t stop 42-year-old Marty Scott, a city planner and father of two in Chicago who weighs 320 pounds. “I started out with just walking. I would integrate short runs into these walks and they got longer and longer. Then some friends suggested I do a five kilometre Thanksgiving Day race and it was a lot of fun and very motivating.” He moved on to a 10 kilometre race that took him 80 minutes. And though that isn’t fast, it’s still much faster than a walking pace.

Now he can 10 kilometres in an hour, and he’s going further too. Marty is up to eight mile races — weighing 320 pounds. And now he’s working on the diet side to get his weight down. Running has been a life-changing catalyst for him.

It changed Marty’s life. It changed my life. Running has changed many lives. Let it change yours.

James S. Fell authors the syndicated column “In-Your-Face Fitness” for the Chicago Tribune and interviews celebrities about their fitness regimens for the Los Angeles Times. Get your FREE METABOLISM REPORT from James.