Why Handstands Are My Favourite Exercise Trend

They’re great for your core, developing strength and boosting your mood—and the only equipment you need is a free wall. 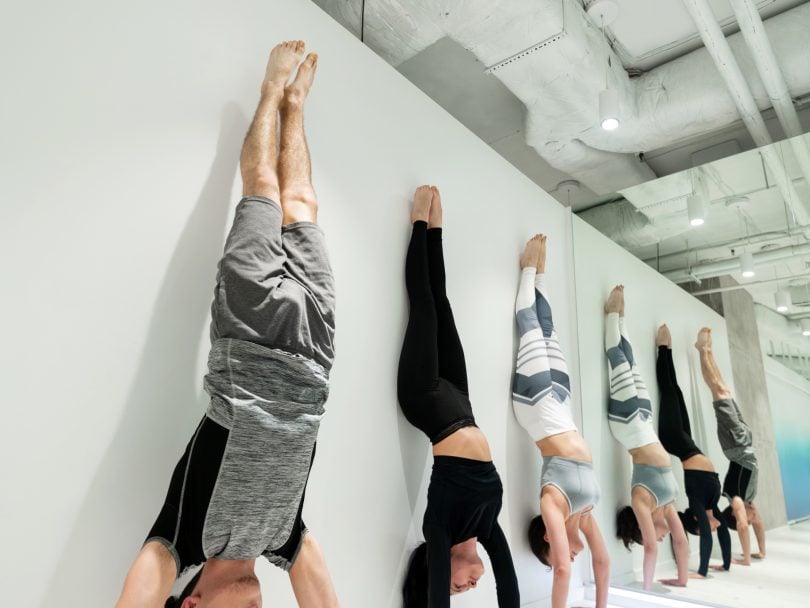 I got into doing handstands in the winter of 2017. My husband and I were living in Regina, where he was working a temporary job contract, and I was supposedly writing a book. I’d recently turned 31, and for the first time my age was not striking me as a novelty item. I’d never lived on the Prairies before, and the sky was exactly as advertised: monstrous, dazzling, everywhere. Particles of frost blew off the trees and ignited in the sun, the air swarming with microscopic shavings of light my iPhone camera refused to register. I felt ensorcelled by the excess of space.

The new environment inspired me to try new things. I bought a Groupon and spent 90 minutes in a salty, tepid pool of water inside a flotation tank, trying to evade gravity. And one day I walked over to a wall at the Regina Downtown YMCA and kicked up into a handstand on a whim. It felt somehow right. I tried again, this time propping my phone on the floor and taking a video to check my form. I posted it Instagram (how else would I know that I exist?) with the caption “inversion therapy.” From that point on, I was on a mission: to be suspended upside down, held up by my own two hands.

How did handstands get so trendy?

Handstands are kind of having a moment. They’re a part of yoga, CrossFit, circus, breakdance, but they’re also an end in themselves: you can find handstands classes, workshops, YouTube tutorials. One Toronto studio serves as an all-handstands zone, with full-length, 90-minute group handstand classes running throughout the week. But even without wandering into bespoke exercise territory, you might have noticed it at normal gyms: people claiming patches of wall and straddle-pressing or donkey-kicking themselves upside down on the regular. Like all trends these days, the real proof of the handstand trend can be measured on Instagram, where #handstand clocks in at over 5.8 million and counting.

Back in Regina, I wasn’t coming to handstands as a total neophyte. I did gymnastics as a kid, and I’ve taken a crack at arm balancing in yoga classes now and again. But I was a decidedly underwhelming child gymnast—I had the right stature for it (small, dense), but the wrong disposition (fearful, spacey). I wanted a spotter even when I didn’t need one, and the one time I was coaxed into competition, I panicked, blanked on my floor routine, and just pranced around doing aimless cartwheels. A coach once told me I had “a mind like a sieve,” which, ironically, I’ve never forgotten. (Check it out, Coach Camille: Sieve like a steel trap!)

Twenty-five years later, I discovered that a proper adult handstand is both easier and harder than it seems. In my case, getting up wasn’t so much the problem—the difficulty was staying there. Upside down, back towards the wall, my foot would often reach behind me, searching out something solid to prod for reassurance. And the moment I found my centre of gravity, I would bail almost right away—more often from a preconscious compulsion to quit than an actual loss of balance. Watching the footage, I could see it happen: as soon as I became aware of what I was doing (namely, successfully standing on my hands), a switch would flip, and I would just stop doing it.

But are handstands good for you?

Inversions are supposed to be mood-boosters: the idea is that sending a rush of freshly oxygenated blood to your head stimulates the brain. According to yoga, getting upside down can help decompress the spine, sooth the lymphatic system and promote digestion. And studies do reveal that getting your heart above your head can have a positive effect on the parasympathetic nervous system and muscle tension. In an active posture like a handstand, a lot of people will at first panic when they get upside down, but the effort can produce an endorphin jolt. And handstands do take effort, using the muscles in just about every part of your upper body: shoulders, triceps, traps, core.

To be honest, my handstands got worse before they got better. But they did get better. All those tiny, untapped muscles I never think to use in my daily life grew stronger, better at making adjustments and coordinating to keep me upright. More than that, though, handstands have become a kind of litmus test for me: a way to take a quick temperature on my own focus and mood. Where’s my attention? Am I working through a problem, or letting myself off the hook? Am I kind of burnt out? Am I not committing? What am I scared of?

A handstand is high energy, but low everything else: low impact, low tech, low stakes (relatively—like any physical activity, there is always a risk of injury). It is without allegiance—it doesn’t belong to any one discipline or sport or creed. It can be a gateway to any number of exercise programs in which the move is practiced, but it’s also an end in itself. Something to practice on your own, for its own sake, because you can.

How do I start?

My advice for the handstand curious: just try. (Maybe ask your doctor first.) You can do it at home, or at the gym, or at the park. Everyone is different, but here’s a good step by step guide. You will look silly. It will not matter. At some point, you will definitely fall—it’s not so bad. I won’t pretend that doing a handstand doesn’t require physical strength, but probably not as much as you imagine. And really, that’s only one part: I’ve seen gym dudes who could bench press two of me flop gracelessly out of inversions they can’t sustain at all. Handstands are about peace and balance and equilibrium as much as muscle mass. They’re about allocating the right amount of effort, spending only what you need to, trying to try a little less.

Doing a handstand will make you more accustomed to what it feels like to fail, fall over, crash back down to earth. But they also force to be more comfortable with the feeling of getting something right, finding success. You know it when you have it. You just have to stay there.