An Ex-Agoraphobe's Guide To Leaving The House

Does the thought of re-entering the world turn you into a cartoon cat being forced into a carrier? Let a verified recovered agoraphobe lead the way. (But, like, very carefully and very slowly. . .) 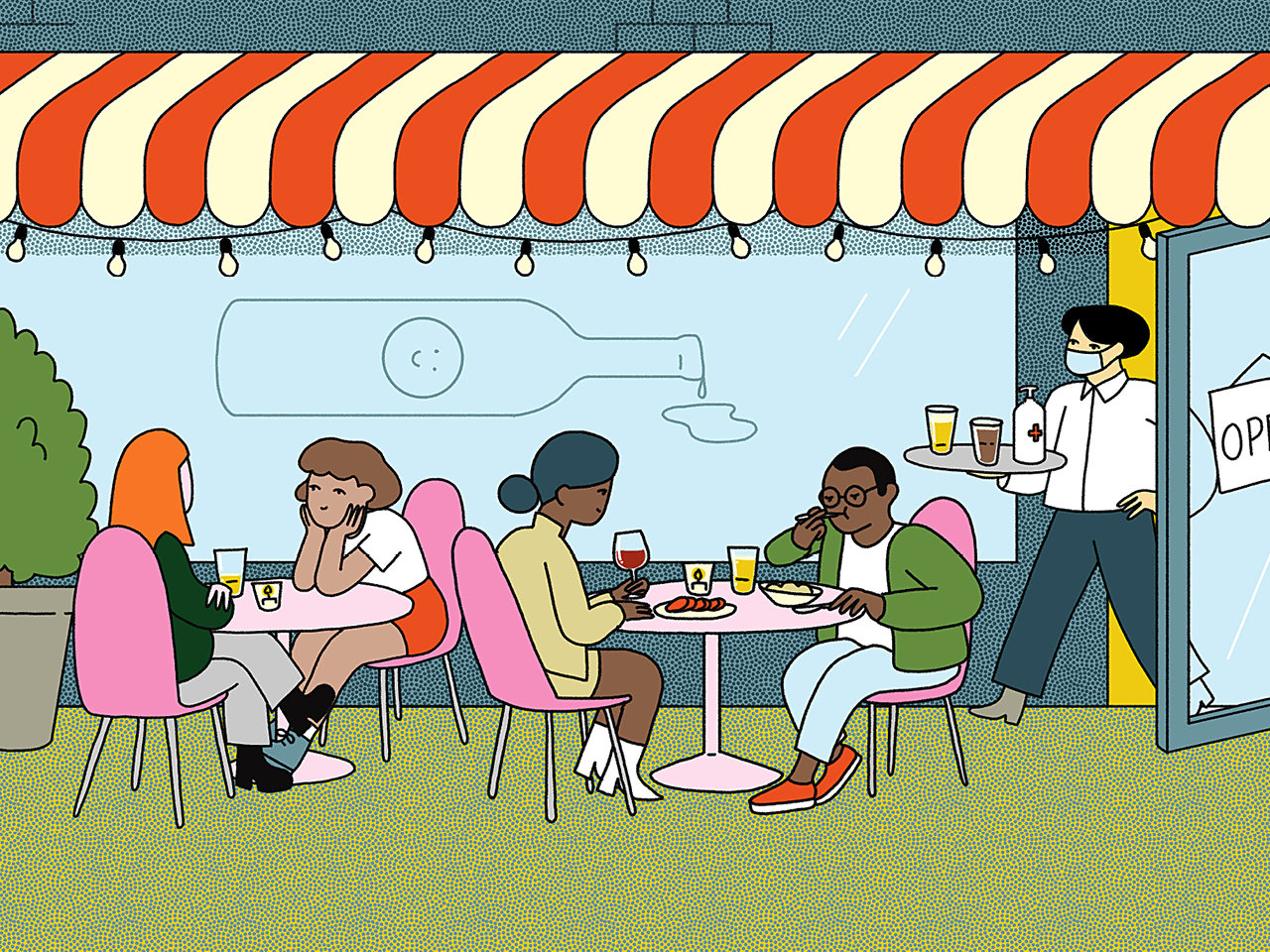 We should all be comfortable with showcasing our talents, so I’ll just come out with it: I’m utterly stupendous at staying indoors. Like, if I ever became an astronaut, I would not do even one single spacewalk; instead, I’d happily stay in and wave at my fellow astronauts to go on ahead without me.

Sure, I haven’t had an agoraphobic episode (er …would we say episode? What would we call a three-month span of being physically unable to leave the house due to devastating panic attacks? A bout?) for a good 12 years. But at the beginning of the pandemic, while you outdoorsy folks were flapping around and faffing about and freaking out, my muscle memory kicked in. I happily unfurled my indoorsy leaves. You’re saying I can’t leave the house? Like it’s forbidden and I am helping my fellow citizens by staying in? OKAY, I’M ON IT.

And not to further brag, but I’m also a seasoned germophobe. My family all fondly remember the Easter when we rented baby chicks for two weeks, and I basically just screeched about salmonella and didn’t really let the kids hold them and sprayed bleach everywhere the whole time. The pandemic was a wonderful dovetailing of two of my passions, and, baby, it was my time to shine!

But I’m not here to offer you guidance on how to be a germophobic agoraphobe (agoraphobic germophobe?), as I’m sure the last 18 months have done a fab job. I’m here to help you get back outside, because I’m also a pro at that.

My first agoraphobic bout came in my 20s. My eventual recovery was thanks to twice-weekly visits to a Freudian psychoanalyst who had a wonderful, confidence-boosting habit of nodding off during our sessions. That did not help. What did help was the terrifying journey via bus and subway to get to him. These forced evacuations from my apartment (preceded by forced evacuations of nervous diarrhea from my body, hey oh) were basically inadvertent cognitive behavioural therapy (CBT), a form of therapeutic treatment, which, when applied to fear and anxiety, espouses that the more we expose ourselves to the thing we’re scared to do, the easier it gets (more on that in a bit).

A second bout of panic attacks and agoraphobia walloped me about 10 years after that. What got me (eventually) out of the house that time was real, actual CBT with a waking therapist, who helped me learn how to poke at my anxious thoughts and expose myself to my fears, tackling them bit by bit.

So I see you, my fellow nail-biting friends looking harrowingly out the window like a stock photo that pops up when searching “recluse.” I know it has been a brutal year and a half. I know those of you who locked down hard might be reluctant to get back out there with things beginning to return to “normal.” But I’m saying if I could do it then, you can do it now. So let’s do this?

Eventually, we’re all going to have to talk in full sentences, sometimes with people we don’t know very well. If your personal brand of anxiety tends to skew social, this is probably what’s giving you the heart palpies: the idea of waking up at 3 a.m. with “Oh, my God, why did I talk about my new period underwear that much?” screeching in a loop in your head.

Because all of our social-connection muscles have atrophied—i.e., we haven’t done any exposure therapy—those first few workouts are all going to feel really intense. So, yeah, back in the saddle, pals.

The key to CBT exposure therapy is to break the scary crap down into small, manageable bites. Say you’re terrified of snakes. You don’t just get thrown into a pit of snakes (that’s called “flooding” in CBT, and it’s terrible for you). Instead, you make a list, called a hierarchy, of a multistep approach: 1. Look at a picture of a snake. 2. Watch a video with a snake. 3. Go to a pet store and see a snake in a tank. 4. Ask to touch the snake. The list can have as many steps as you need; as in, the picture of the snake might need to be in a different room from you at first. You address the physical reactions and racing thoughts with each step until it feels doable. And then you move on to the next step.

“The best thing to do is exposure work, and then really challenge those thoughts that come up,” says Carolina McBride, a psychologist and owner of the Cognitive and Interpersonal Therapy Centre in Toronto. “If the thought is, ‘This person is going to think really negatively about me,’ examine that. Ask yourself, ‘Do I really care about this person’s opinion? Is that thought 100 percent true? If they said what I said, would I judge that?’”

“I don’t see heading back to the office going from zero to 100—I think it’s going to be a gradual transition,” says McBride, who is working on a hybrid model for her own office. And the more we go in, the less scary it will be.

Of course, we may feel pretty out of control if our employers don’t share the same views on safety as we do. “Employees always have a right to refuse unsafe work, including in an office environment,” says Lindsay Scott, a Toronto-based employment lawyer with Paliare Roland Rosenberg Rothstein LLP.

If your employer is following public health guidance and government regulations—social distancing, indoor capacity limits, mask use, etc.—then just being freaked out isn’t a good reason to get you out of going back to work. “That said, if you have a specific COVID-19 vulnerability, you may want to raise that with an employer for special accommodation,” says Scott, adding that mental health challenges that are considered a disability under the human rights code are included.

And, please, let’s all say a happy goodbye to the notion that everyone wants your gross, snotty self to soldier on into the office when you’re sick. “I think there will be less tolerance for that and more understanding that if you’re sick, you don’t come to the office,” says McBride. “And, hopefully, employers will give employees more sick days …” LOL, but yes, hopefully.

Again, this probably isn’t going to be a zero-to-100 scenario, where today you’re in your jammies watching Temptation Island, having not spoken to another soul in 18 months, and tomorrow you’re flying to see Billy Joel at Madison Square Garden. Before I go see Billy Joel, I should go see a movie. I should try a matinee first, because it won’t be too busy.

But what do we do when there’s a cough from the dude sitting behind you in the theatre? “First, recognize that, of course, that’s going to create some anxiety,” says McBride. “And then figure out what those anxious thoughts are, like, ‘He’s coughing and that means he has COVID and I am going to get sick.’” The next part is challenging those anxious thoughts: “We can say to ourselves, ‘Okay, I’ve been fully vaccinated, the risk in the community now is very low. Even if he were to have COVID, the risks of me getting it are extremely low, and even if I get it, the likelihood of me getting seriously ill is low.’”

If you’re still super distracted after that chat with yourself, then it’s time to problem solve. “Say, ‘Maybe there’s an open seat,’ ” says McBride. (This is the B in CBT—looking at your behaviours.)

Somewhere a million years ago, I heard someone say that watching a guy put on a condom is sexy “because it means my health is important to him.” It completely transformed the way I thought about condoms (and men). Now the same philosophy goes for masks—I love seeing people wear them, knowing we’re all taking care of one another’s health.

The good news, says McBride, is that I’m not going to feel out of place. “I don’t think masks are going to disappear,” says McBride. “In many other places around the world, masks are very common, and I think that we will see a shift in North America where that will become the norm, too—especially in situations where you’re with a lot of strangers.” (Especially until we figure out how to keep kids and workers in schools healthy.) Until then, max vaxxed and masked, babies!

Like any seasoned catastrophizer, I’ve always said I’d rather be pleasantly surprised by something terrible not happening than get caught off guard by it. I have iodine tablets in my cupboard in case the nuclear plant 50 km away goes tits up, for God’s sake. But hypervigilance (a.k.a. thinking that if we keep our eyes open wide and wild enough, we will be able to stave off disaster) does not work.

“That’s the fallacy with anxiety—you think, ‘Okay, if I worry, I’m going to be better prepared.’ But, in fact, you’re no better off than if you hadn’t worried at all,” says McBride. There’s a lot outside of our control, and sometimes inundating our wee brains with a constant onslaught of stats and graphs and tweets (and not just COVID-related doom, either) just messes with us and serves no purpose. It is an example of exposure therapy gone bad.

For me, taking my hands off the wheel and stepping away from the 90 epidemiologists I follow on Twitter will be way harder than taking off my mask. “What we would do in CBT is to get you to unplug for a day and track your mood, and then be completely plugged in for the next day and track your mood,” says McBride. “You can see how much it’s actually affecting you.”

Overall, my plan is to go slow and be gentle with myself. “Have a bit of self-compassion,” says McBride. “It’s okay to feel a bit anxious.” But, hopefully, you’ll see me soon—bush out, mask on—at the Bay, and I’ll tell you about my new period underwear.