Her love affair with food began as a child while living on a ranch in California with her grandparents.

In her late 20s, when Christine’s grandfather passed away, she began to use food as an antidepressant. In six weeks she gained 30 pounds. After an endless stream of unsuccessful diets Christine met a nutritionist who taught her to stop dieting and eat real food — effectively changing her life. 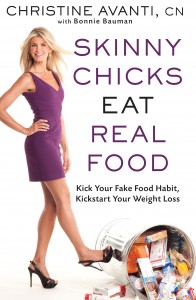 Christine has since counselled more than 1,000 clients who’ve collectively lost more than 10,000 pounds.

We recently had the chance to speak with the Los Angeles-based nutritionist about how we can eat healthy without constantly finding ourselves in line for the salad bar.

She shares nine of her favourites and the tea recipe she swears by below:

2. Cayenne pepper
Cayenne pepper heats up the body and is thought to increase metabolism. Chili pepper has a similar effect.

3. Cinnamon
According to the USDA, consuming as little as ¼ teaspoon of cinnamon with food helps the body metabolize sugar 20 times faster and lowers blood sugar levels.

5. Seaweed
The property in seaweed that helps us lose weight is alginate, which lines the walls of the digestive system and prevents dietary fat from passing through.

6. Tea
The caffeine in tea stimulates thermogenesis, the biochemical process by which fat in the body is burned to produce energy. Plus, tea has a fabulous antioxidant called EGCG (epigallocatechin gallate) that provides fat burning activity.

8. Coconut oil
In 1998, obesity researchers at McGill University found that medium chain fatty acids (MCFAs), the type found in coconuts, actually use up energy when they’re metabolized. The calories the body uses to oxidize the fatty acids in coconut oil is greater than the calories they provide. So it’s possible to burn more calories digesting coconut oil than you get from eating it.

9. Fermented foods
These living fermented foods boost the immune system by increasing antibodies that fight infectious disease. The flora form a shield that covers the small intestine’s inner lining and helps inhibit pathogenic organisms, including E. coli, salmonella, and an unhealthy overgrowth of yeast. Some fermented foods even create antioxidants that fight free radicals, a precursor to cancer. In addition, fermentation transforms hard-to-digest lactose from milk to the more easily digested lactic acid. Yogurt is a great example of this process.

So do fermented foods speed up weight loss? Not necessarily, but they will support weight loss. Here’s why: For one thing, fermented foods do tend to be nutritionally dense and filling, and some are low calorie. In addition, the probiotic nature of some fermented foods aids in the digestion of food and assimilation of nutrients. 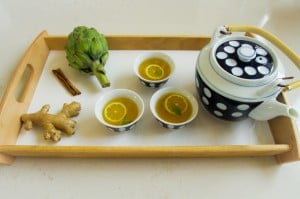 Christine Avanti’s detox tea
This tea recipe includes several of the food listed above and it’s only four calories!

*Artichoke extract is available here and helps with digestion and liver detoxification. Thirty drops is the equivalent of one dose.

Directions
1. Combine 5 cups of water and the ginger in a large saucepan.
2. Bring to a gentle boil and boil for 1 minute. Remove from the heat.
3. Add the tea bags and cinnamon sticks.
4. Cover and steep for 15 minutes.
5. Strain into a large pitcher.
6. Add the artichoke extract and lemon juice.
7. Stir and refrigerate for 30 minutes or until cold.

For more from our 30 Days of Detox hub click here.

FILED UNDER: 30 Days of Detox