We need 75 per cent of adults to have a first dose and 20 to have a second. How soon might we get there? 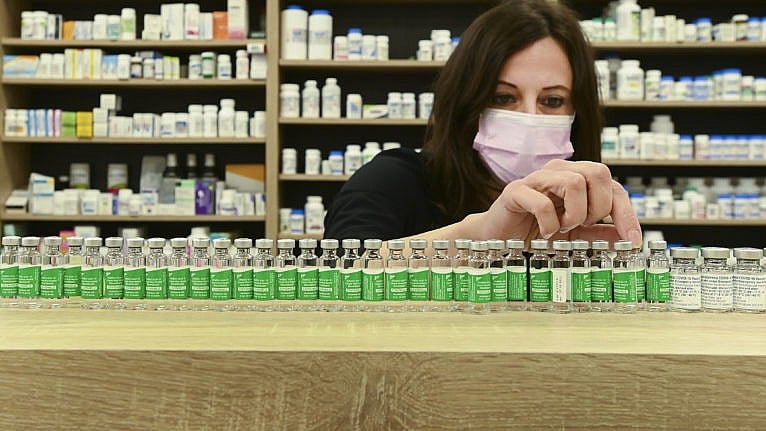 Pharmacist Barbara Violo arranges all the empty vials of the Oxford-AstraZeneca COVID-19 vaccines that she has provided to customers at the Junction Chemist in Toronto, on April 19, 2021. (CP/Nathan Denette)

On April 23, Dr. Theresa Tam, Canada’s chief public health officer, unveiled the latest federal modelling of the pandemic, which forecast that the number of new cases could level off and start dropping in May, depending on the extent of public health restrictions.

Even as more Canadians get their first doses of vaccine, Tam cautioned against lifting those measures too quickly, pointing to the example of Britain, where health authorities have only now started gradually easing restrictions—at a point where more than 60 per cent of adults have received a first dose.

The new modelling showed that restrictions could be lifted when 75 per cent of adults have received their first doses and 20 per cent have received their second doses of vaccines. When that scenario is reached, “restrictive measures could be gradually eased as long as adequate tests, trace [and] isolate capacity and individual precautions are maintained,” Tam explained. Federal modelling forecasted that hospital capacity would become overwhelmed in the fall if only 55 per cent of adults had received first doses by then.

Tam offered no specific indication of when Canada would reach that 75-20 target, just that it would occur “by mid-summer.”

So how does Canada begin to balance giving out both first and second doses? And when could we achieve Tam’s 75-20 target? Maclean’s, Chatelaine’s sister publication, did some calculations and consulted with an expert who has been tracking Canada’s vaccination rollout to figure out when that latter goal could be achieved. There are lots of issues to consider.

How many vaccine doses have been given in Canada so far

Right now, Canada has a “first dose first” strategy that began on March 3 when the National Committee on Immunization effectively changed the rules of the vaccine rollout. NACI’s recommendation was that “in the context of limited COVID-19 vaccine supply, jurisdictions should maximize the number of individuals benefiting from the first dose of vaccine by extending the interval for the second dose of vaccine up to four months.”

Right now, Canada is administering an average of around 300,000 doses a day. At our current pace, Canada will reach that 75 per cent first-dose mark by June 6, a little over a month away, according to Trevor Tombe, an associate professor of economics at the University of Calgary, who provides daily updates on Canada’s vaccine progress on his Twitter feed.

Starting in June, millions of Canadians are going to be nearing the four-month deadline for their second shots, meaning provinces are going to have to balance the need to keep offering first doses with the need to ramp up second doses.

Already, officials are starting to talk about the process. On April 22, Maj.-Gen. Guy Fortin, who is in charge of vaccine distribution logistics, said, “We have constant conversations [with authorities in provinces and territories] about managing the second dose and quantities.”

Anita Anand, the procurement minister, said on April 23 that she expects a cumulative total of 48-50 million vaccines to have arrived in Canada prior to the end of June. Technically, that would be more than enough to achieve Tam’s 75-20 metric without needing to dramatically slow the pace of administering first doses so as to also ensure people get their second doses before that four-month deadline. (6.3 million people fully vaccinated with two-dose vaccines equals 12.6 million doses, while another 23.7 million adults need first doses, meaning that Canada requires at least 36.3 million doses of Pfizer, Moderna and AstraZeneca vaccines).

Still, complications could be coming that may force provinces to decide how many first and second doses can be administered concurrently. As Fortin admitted, “there are questions about when we [can] expect to have visibility on AstraZeneca and Moderna and we closely manage that.” While shipments of Pfizer vaccine are arriving like a metronome every week—as of the beginning of May, those deliveries double to more than two million doses a week—other deliveries have been erratic at best. Moderna has struggled to ramp up production to the point that it slashed its latest shipment, due this week, from one million doses to 650,000. As of now, the federal government has not publicly announced any future shipments of Moderna, though on April 14, Fortin said that Moderna had confirmed that Canada would receive 2.8 million doses in two shipments in May. That’s the same amount as has already been distributed in Canada, as of April 21. (Most provinces don’t release data broken down by first and second doses or by vaccine, so it’s unclear how many people who received Moderna doses early in 2021 have already been fully vaccinated.)

The other issue is the AstraZeneca vaccine. Right now, everyone who received AstraZeneca for their first dose needs AstraZeneca for the second. To date, Canada has distributed and administered around 2.3 million doses of that vaccine, virtually all as first doses, meaning the country will need a minimum of another 2.3 million by this summer for second doses. As of now, there are no reports of when those doses will be arriving. Canada received 1.5 million doses of AstraZeneca as a one-time loan from the United States, while more was delivered through COVAX as well as from the Serum Institute of India; since late March, the Indian government has stopped vaccine exports as it deals with a surging wave of cases.

This week, Canada is receiving its initial allotment of 300,000 doses of the Johnson & Johnson vaccine, which requires just one dose for full effectiveness.

A survey in the United States showed that just eight per cent of those who have received their first doses of Pfizer or Moderna vaccine haven’t shown up for their second shots. While that accounts for roughly five million people, it massively exceeds the completion rates of other multi-dose vaccines, such as those for hepatitis A and B. Canadians are eager to be vaccinated. A new poll by the Angus Reid Institute found that “the percentage of Canadians either already vaccinated or anxious to be has jumped to 71 per cent” with another 12 per cent saying they would get vaccinated but weren’t in a hurry.

When could Canada achieve Tam’s goal?

While Tam’s modelling said that her 75-20 metric would come in mid-summer, Trevor Tombe has done his own calculations. With two simultaneous targets, and varying policies across provinces, he thinks things will come down to how much we want to achieve the goal: “[Getting to 75-20] would require 80 doses be administered per 100 people (or roughly 30 million doses). This doesn’t mean we will achieve the 75 per cent and the 20 per cent targets, but it is enough doses that we could.” His estimated date: June 28.