Data shows good immunity nine months after receiving two doses, PHAC says, though need for boosters is being 'closely monitored' in light of emergence of variants of concern. 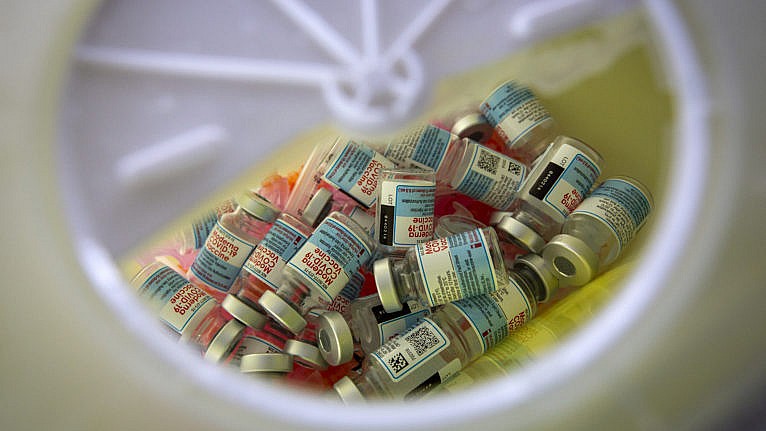 Empty vials of Moderna COVID-19 in a sharp container before a vaccine clinic in Kingston, Ontario on Friday July 2, 2021. THE CANADIAN PRESS IMAGES/Lars Hagberg

On July 8, Pfizer and its COVID-19 vaccine partner BioNTech announced that it would apply in coming weeks for emergency use authorization from the U.S. government for a booster to its two-dose vaccine. “Pfizer and BioNTech believe a third dose of BNT162b2 [its vaccine] has the potential to preserve the highest levels of protective efficacy against all currently tested variants including Delta,” the press release stated. “While protection against severe disease remained high across the full six months, a decline in efficacy against symptomatic disease over time and the continued emergence of variants are expected. Based on the totality of the data they have to date, Pfizer and BioNTech believe that a third dose may be beneficial to maintain highest levels of protection.”

U.S. government agencies and experts did not react favourably to the announcement, which occurred before Pfizer and BioNTech published data supporting a third dose or submitted it to be peer-reviewed. “Americans who have been fully vaccinated do not need a booster shot at this time,” said the U.S. Centers for Disease Control and the Food and Drug Administration in a joint statement. “FDA, CDC, and NIH [National Institutes of Health] are engaged in a science-based, rigorous process to consider whether or when a booster might be necessary. This process takes into account laboratory data, clinical trial data, and cohort data—which can include data from specific pharmaceutical companies, but does not rely on those data exclusively. We continue to review any new data as it becomes available and will keep the public informed. We are prepared for booster doses if and when the science demonstrates that they are needed.”

The Canadian government is also preparing for that potential eventuality. On April 23, Prime Minister Justin Trudeau announced that the federal government had “reached an agreement with Pfizer for 35 million booster doses for next year and 30 million in the year after. This deal includes options to add 30 million doses in both 2022 and 2023 and an option for 60 million doses in 2024.” He said that Ottawa was “in ongoing discussions with other vaccine manufacturers about their plans for booster shots, too.

While Pfizer and BioNtech have announced that they will apply for authorization for a booster in both the United States and the European Union, they haven’t approached Canada yet. “Emerging data to date shows good immunity in most people out to nine months after receiving two vaccine doses,” said the Public Health Agency of Canada, in a statement to Reuters. “It is possible that Canadians will need a subsequent vaccination, or booster shot, after we have reached sufficient levels of community protection with the current rollout… Given the emergence of variants of concern, the need for future booster doses is being closely monitored.”

In the Pfizer-BioNTech press release, the firms referenced the threat posed by the Delta variant of concern. Some Israeli government officials have put Pfizer’s current effectiveness at 64 per cent against Delta. “Vaccine efficacy in preventing both infection and symptomatic disease has declined six months post-vaccination, although efficacy in preventing serious illnesses remains high,” said the Pfizer-BioNTech press release in reference to data from Israel. While everyone awaits full analysis from Israel, experts point out that other recent studies, including a large one from Canada, have shown all the vaccines to be effective against Delta and the other variants.

There is no definitive study as to how long the COVID-19 vaccines remain effective, in part because they are so new. In late June, a preview of a small study published in Nature suggested that mRNA vaccines, such as Pfizer and Moderna, may actually protect against the SARS-CoV-2 virus for years. “It’s a good sign for how durable our immunity is from this vaccine,” said Ali Ellebedy of Washington University in Missouri to the New York Times.

At the same time, researchers say that boosters may be necessary for specific groups, in particular those with weakened immune systems—such as transplant patients. Indeed, France and Israel have already started giving third shots to those groups. “Some immunocompromised people don’t mount the same immune response and may still be vulnerable to disease,” tweeted Dr. Isaac Bogoch, an infectious diseases physician at the University of Toronto. That follows the pattern that occurred with second doses: Canadian provinces shortened the interval between first and second doses of vaccine for dialysis patients, certain cancer patients and those on immunosuppressive medications because their immune response after one dose wasn’t strong enough.

In some cases, boosters are given to buttress the effectiveness of vaccines that haven’t performed as well. Not all vaccines in use around the world are proving to be as effective as the mRNA ones. After both Thai and Indonesian researchers reported breakthrough infections among health workers who were given two doses of Sinovac, a Chinese COVID-19 vaccine, Thailand announced that it will offer mRNA third shots to medical staff who got Sinovac.

On June 30, Britain’s Joint Committee on Vaccination and Immunisation (JCVI) produced what it called interim advice stating that it may roll out a booster program as soon as September, starting with those most at risk. Still it cautions that plans may “be subject to substantial change before being finalized, depending on additional scientific data expected in coming months including “clinical trial and real-world effectiveness data on the durability of protection beyond six months” and “clinical trial data on immune responses following a third vaccination.”

Pfizer’s announcement comes as many nations are pleading for doses amid their own huge waves of new cases of COVID-19. Dr. Samir Gupta, a respirologist at St. Michael’s Hospital in Toronto, tweeted: “I get it—governments need to protect their own people if they want to get re-elected. But when rich countries are giving third doses just in case, while the vast majority of people in low/middle income countries can’t access a first dose, it’s time for a hard look in the mirror.”