Everything You Need to Know About The New COVID Alert App

It's not perfect, but it’s another useful tool in our fight against this pandemic. 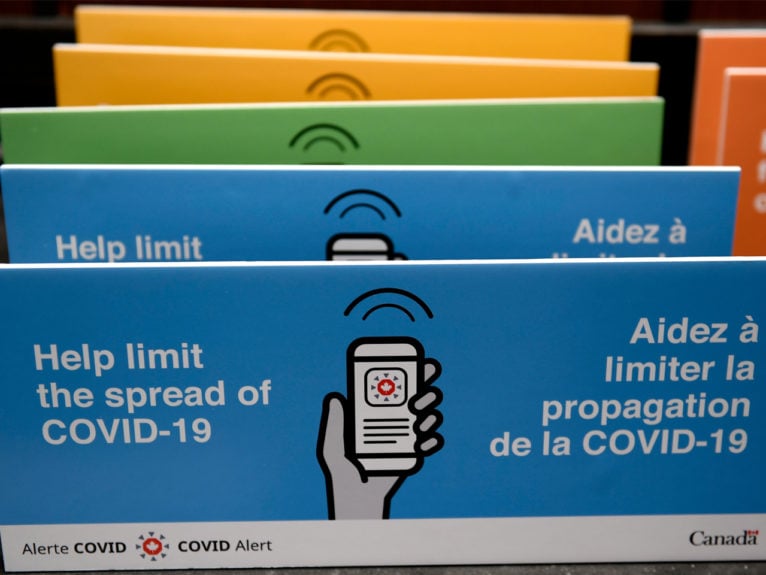 When the Government of Canada’s COVID Alert app became available in Ontario in late July, I happily downloaded it. Partly to do my part in combating COVID-19, but also out of curiosity. Would I start getting pings after going to the grocery store? And if I did—what would I do next? After speaking to a few experts, I have a much clearer idea of what this app is meant for, and why it’s important that as many Canadians as possible download it. Here’s what you need to know.

What is the COVID Alert app and how does it work?

“Although people are calling it a contact tracing app, it’s actually more of an exposure notification app,” says Ashleigh Tuite, an assistant professor of epidemiology at the University of Toronto.

Once you install the app on your phone, it will begin to send out Bluetooth beacons every five minutes that ping other devices nearby. If it locates a phone that also has the app installed, it will record the encounter. When two phones are within two metres of each other for more than 15 minutes, it’s considered an exposure. So, it won’t record your contact with someone you walked past on the street, but could record an exposure if there was a long wait at the pharmacy, for example.

If a user is later diagnosed with COVID-19, they go into the app and enter a code that was given to them when they received the positive test result. At that point, anyone who was exposed to that person within that last 14 days, as recorded by the app, will get a notification that they’ve been exposed to COVID-19.

“It’s not going to tell you any information about where that happened or when that happened. It’s basically going to send you an alert that shows you’ve been exposed,” says Tuite.

“Privacy has been taken very seriously when it comes to this app,” says Ritesh Kotak, a cybersecurity expert in Toronto who was not involved in the development of the app. For one, it uses Bluetooth, not GPS, which means it’s not actually recording your location. (Kotak says that on Android phones, you need to enable location services in order for the app to run, but that the app isn’t actually logging your location.)

Also, the app is voluntary and anonymous—it can tell you that you’ve been exposed to a person with COVID-19, but it can’t tell you when, or where. Of course, if you’ve been mostly isolating and have come in contact with very few people, it could be easy enough to figure it out, but the same is true of any form of contact tracing.

Will it cost me anything—or eat up my data?

The app is free to download and because it uses Bluetooth, it won’t eat up your data—in fact, you don’t even need a phone with a data plan to run it. You do, however, need to connect to a network once a day for it to exchange the randomized Bluetooth codes with the server, to see if there’s a match.

Overall Kotak is happy with the performance of the app. “It runs in the background,” he says. “It doesn’t drain your battery. I’ve downloaded it, and I haven’t seen any issues with performance so far. I don’t even know it’s on unless I click on the app.”

Don’t forget, though, to make sure your Bluetooth is on, or the app won’t work. If you’re travelling by air, be sure to turn Bluetooth back on after putting your phone in airplane mode.

What do I do if I get a notification that says I’ve been exposed to COVID?

If the app indicates that you’ve been exposed to someone with COVID-19, you’ll get a notification that tells you to contact your public health authority for guidance. What happens next is still a bit unclear as the app is so new, says Tuite, but ideally you’ll speak to someone who will guide you.

“I think the advice would really vary depending on the context. If in the past two weeks you were out on a patio for three hours and in close proximity to people, the advice would probably be quite different than if you were out grocery shopping once and wearing a mask and taking precautions to not get infected.” In the second scenario you may not be told to self-isolate, but in the first scenario you most likely would be.

Unfortunately, it’s not going to be as simple as going for a test and seeing if it’s positive or negative. “If you get a test and you’re positive, then that’s helpful. You know that you’re infected and you need to self isolate,” says Tuite. “But if you get a negative test, it doesn’t mean that you’re not infected. It could be that you got tested too early, for example, so you could still be incubating the infection.”

Is the COVID Alert app available to all Canadians?

So far, you can download the app anywhere in Canada, but as of press time, only those in Ontario are able to enter a code when they’ve been diagnosed. (The Government of Canada says it is working with other provinces and territories to make the app available across the country.)

Not in Ontario? You should still download the app so that it can start recording your exposures. As soon as infected individuals in your province can input a code, the app will be able to go back 14 days to check for matches.

Also, you need to have the latest operating system installed on your phone in order to download the app, which means people with phones more than five years old won’t be able to install it, as they can’t be upgraded to the newest operating system.

“The exposure notification framework that was developed by Apple and Google—the plumbing that goes on behind the scenes—unfortunately only works if you have an up-to-date phone,” says Kotak.

Because of this, rollout of the app has been criticized for leaving out sectors of the population who are in a lower socio-economic bracket, who have typically been hard hit by the virus so far.

“I understand the criticism. This does make it a bit of an accessibility issue,” says Kotak. He explains though, that to ensure that the app works well and that data can be shared among provinces, it needed to be made for the most up-to-date platform. He also encourages anyone who has a phone that hasn’t been updated to the latest operating system, but has the capability to be updated, to do so. “The majority of the time, that’s related to security. These security patches are normally to fix vulnerabilities. I always recommend individuals have their platforms and their apps up-to-date anyway.”

How many people need to download this app for it to be successful?

There is no magic number, no matter what you may have heard. One widely cited number, 60 percent, came from an Oxford University study that its authors say has been misunderstood. What that study was saying, in fact, was that if about 80 percent of smartphone users, which represents about 56 percent of the population, downloaded a notification app, that, along with other measures, could stop the pandemic. But the researchers ran through a number of scenarios and found that any amount of uptake can have a positive impact.

Essentially, in order for the app to do its job, both the person who has been infected by COVID-19 and those who were exposed to them, need to have downloaded it. “If you and I are interacting, and I have the app, and you don’t, it’s not useful,” says Tuite. Then, of course, the system relies on the person who got a positive test result to upload their code, and for the person who got a notification that they were exposed to contact their local public health department, and to follow through with the guidance they receive.

“It’s part of a social contract. We are all trying to get ahead of this and minimize the impact this virus has on families,” says Kotak.

From the time I downloaded the app to when I finished writing this article, I actually haven’t left home except for a few walks and a trip to the corner store.

Needless to say, my app has been silent. But, I can see the benefit as things start to open up more and people resume more regular activity, as well as for those whose jobs require them to interact with the public regularly.

“Regular contact tracing works very well for household members, for friends and family and coworkers, because we tend to know those people. If you were that index case and I called you up and said, who were you in contact with? You could probably name those people pretty easily,” explains Tuite. “It’s more difficult, for example, if you were at a wedding, or a bar or a restaurant. Or a house party. You probably don’t have those people’s phone numbers.”