Sub in chickpea flour for all-purpose flour, and your Saturday morning has never been healthier. 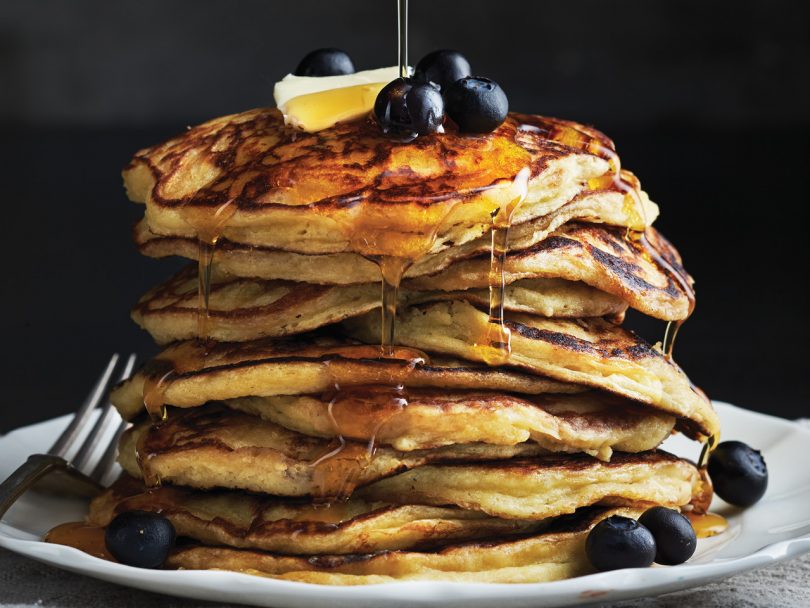 All-purpose flour is most people’s go-to for bread and other baked goods, and while it’s great for lots of things, it’s not the best nutritionally. When it comes to some recipes—especially pancakes—there’s a delicious and healthy alternative: chickpea flour.

What is chickpea flour?

Chickpea flour, also known as garbanzo bean flour or besan, is made from ground, dried chickpeas. It has a fairly neutral, slightly nutty, slightly “bean-y” flavour that lends itself well to both savoury and sweet dishes. You can find it at Bulk Barn, or look for brands such as President’s Choice Organics and Bob’s Red Mill (labelled Garbanzo Bean Flour) in health food stores or the gluten-free aisle of some grocery stores.

Why is chickpea flour healthy?

Unlike all-purpose flour, chickpea flour is high in protein, fibre and micronutrients, while being low in carbohydrates and calories. Half a cup of chickpea flour contains an impressive 11 grams of protein, 5 grams of fibre, and nutrients like folate, iron, magnesium and zinc.

Chickpea flour is also heart-healthy. Chickpeas are high in soluble fibre as well as phytosterols (plant compounds that resemble cholesterol), both of which help lower LDL or “bad” cholesterol. Reducing cholesterol can help lower blood pressure, thereby protecting against heart attack and stroke. Chickpeas also contain polyphenols, such as flavonoids, which have antioxidant properties and are anti-inflammatory.

Another benefit? Chickpea flour is low on the glycemic index, which is a measure of how much a food raises your blood sugar as it’s digested. So in comparison to all-purpose flour pancakes, chickpea flour pancakes take your body longer to absorb the carbohydrates. This translates to more prolonged energy, rather than a spike followed by a “sugar crash”, which soon leaves you hungry again and craving more carbs. While this is especially important for people with diabetes, limiting refined carbohydrates is also protective against developing diabetes.

And for those with celiac disease and gluten intolerances, having another flour alternative is a huge win, especially because common substitutes (like white rice flour, tapioca starch or potato flour) often provide empty calories.

How should you use chickpea flour?

Chickpea flour is best used in recipes that won’t be affected structurally by the lack of gluten, and which subtly mask the flavour. Swapping in chickpea flour isn’t ideal for all recipes because its lack of gluten results in baked goods that don’t rise as much, and its denser texture means it absorbs more liquid than all-purpose flour. However, it can be used in everything from a coating for fish or seafood, a binder in burgers or falafel, a thickener for soups and sauces, to brownies, no-egg omelettes and pizza crust. The internet is obsessed with the following recipes (I’ve tried them and can vouch that they’re awesome!):

I’ve discovered that chickpea flour is so good in pancakes, though… and the fact that it’s super nutritious is just the icing on the cake—or rather, the syrup on the pancakes!

Kitchen Tip: No buttermilk? No problem.

How to make maple custard oatmeal