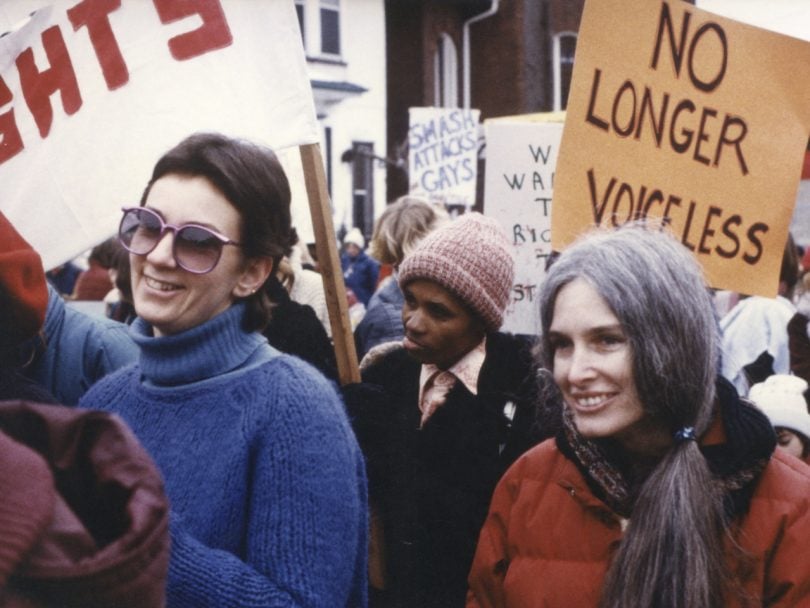 Carolyn Egan at a march in Toronto in the 1970s. (Photo, Diana Meredith, c/o Peter Marmorek)

Abortion was decriminalized in Canada in 1988, after pro-choice advocate Dr. Henry Morgentaler successfully challenged the constitutionality of Canada’s abortion law. Three decades later, access to both medical and surgical abortion isn’t perfect—especially for women in rural areas—but it’s radically better than what it once was. Still, as we see threats to Roe v. Wade (the landmark case that gave Americans a right to abortion) growing next door in the United States, it is important to remember how we got where we are.

Here, four women share what it was like to be faced with an unwanted pregnancy prior to 1988—and why we can never go back to such restrictive access.

Who she is: The executive director of the Abortion Rights Coalition of Canada, which advocates for the protection of and advancement of abortion rights and access. She made an appointment for an abortion shortly before the 1988 Morgentaler decision.  Prior to that decision, abortions were allowed under Pierre Trudeau’s 1969 Omnibus Bill, which amended the Criminal Code, but only if a “therapeutic abortion committee” of three doctors—none of which could be performing abortions—confirmed that continuing a pregnancy would threaten a woman’s health and if it was done in a hospital. Before 1969, practicing an abortion was punishable by a life sentence and other forms of contraceptive, such as the Pill, were also illegal.

I got pregnant after forgetting to use contraception in a moment of passion—I ended up later marrying the guy—and we had broken up at this point. I went to my gynecologist and was quite shocked to learn that my abortion application had to be put to a committee at the Vancouver General Hospital. I didn’t have to appear before the committee, he could just send the application on my behalf. But he said, ‘No worries, they approve them all.’ It turns out this particular hospital, luckily enough, just rubber-stamped them all. I learned later of course, that was not the case for many other women who had to actually appear in front of this committee and were often refused. Some hospitals didn’t offer any abortions.

Anyway, there was a waitlist. I remember I had to wait three weeks. When I went to the gynecologist it was probably around mid-January and I was very sick. Morning sickness all day long. I felt awful, but I had to work and do everything like I was normal and feeling well because I didn’t really tell anyone what was going on. I remember being consumed with panic. There was no way I wanted to have a baby. I kept thinking things like, ‘What if the doctor is sick that day? What if they cancel for some reason?’ I was just so afraid that somehow I wouldn’t get my abortion in the end. The day arrived and everything was fine.

I remember when I woke up in the aftercare area. Almost immediately I knew I felt better. It was just a huge relief. I was a bit groggy and they let me out. This was around February 5 or 6 and I remember it was a very unseasonably warm sunny day in Vancouver. I went for a walk and I just felt so good, it was a huge weight lifted off of me. I had my life back. I almost felt ecstatic, to be honest. The world just looked so beautiful and everything was nice. Going through the experience sure makes you realize how important the right is to people and why women feel so desperate and [take] the lengths they will go to get an abortion—risk their health and lives. That kind of really woke me up and also this idea of having to get approval like, ‘What? I don’t have control over this decision myself?’

Who she is: A retired sexual health educator and former relief counsellor (someone who helps advocate for and support patients) at the Toronto Morgentaler Clinic.

The anti-abortion, anti-choice movement really didn’t get going until abortion became legal in this country. Then, it tried in many different ways to stop women from getting abortions. One of the ways was to make them feel utterly guilty for getting the reproductive healthcare that they needed. And women felt guilty. There was a woman who asked me [before getting an abortion], “Do you think I will go to hell for this?” It was a perfect example of the guilt that women felt—and feel to this day.

There was a counselling service as part of the University of Toronto [after 1969, when the Criminal Code was amended]. It’s not there anymore. We used to go there every Wednesday night and women would come and we would counsel them about abortion and we would try to get them abortions here in Toronto. If we couldn’t, we sent [women] to [a clinic in] Buffalo. [New York legalized abortion in 1970.] Sometimes they would get sent back over the border because the border people were suspicious of them. We would say, ‘Take a suitcase and tell them you are going to spend the weekend in Buffalo and shop or something.’ People have to know that even when abortion was made legal under certain circumstances, it was still difficult.

When I worked at the Morgentaler clinic, there were always dozens of women waiting in the waiting room [to have an abortion]. Dozens! I am sure every woman who came in thought she was going to be the only one. When women see that other women have had this situation, they understand better.

Who she is: A doctor who provides abortions; prior to the Morgentaler decision she was a volunteer at the Winnipeg Morgentaler clinic which gave access to abortions before it was legal (approved abortions were only allowed in hospitals). She was there when it was first raided.

After 1968, the way you could get an abortion was if your life or health was in danger. One of the routes around this, which is horrific to me—you had to call it pregnancy depression. Women were diagnosed with depression and because depression could lead to suicide, the doctor could grant you permission to have an abortion. Mostly the doctors did it at 12 weeks. 12 weeks is [the time] from your last menstrual period, so that means 10 weeks from conception and eight weeks from your first missed period. It’s not a whole lot of wiggle room and also it took quite a few weeks to get through all those hoops, to get in there. It was sort of legal, but it wasn’t so accessible. Access was patchy, you had to know somebody and you had to say you were depressed or you even had to say “I’ll kill myself if I don’t have an abortion.’ It sounds pretty extreme—and for many women it was that extreme.

I volunteered [at the Morgentaler clinic]—when the first raid took place [in 1983; Morgentaler’s clinics were illegal until 1988 and the government raided the Montreal, Toronto, and Winnipeg clinics several times]. At the time, I thought [the abortion] issue was going to be solved by the end of this summer. I was so naive. I just thought, ‘This is a non-issue for me. I just can’t believe people are protesting this.’ I thought it would be up and running pretty soon and people would go home. When we were raided, then I realized I was totally, totally out of touch with how things really were. There had been a deal made with Henry Morgentaler and the attorney general. The deal was they weren’t going to raid; they were just going to arrest him. But in fact, they took the women [waiting for an abortion] into custody. They took the staff into custody. They thought I was staff even though I was just a volunteer. We were jailed, which was the turnaround point for me. It was a turnaround point, it seems to me, for most of the country. There was a ton of national support. People gathered and rallied and it just really lit the whole issue up for me to say, ‘I think I need to be involved here.’ I then became politicized.

In 1988, everything really changed from there. When you say how is it different, I see a woman now, she decides she is not happy about being pregnant, for whatever her reasons, I don’t even have to know. I just trust she is making the decision—and these are all the things I will check with her—that she is not being coerced into this decision, that it is her decision, that this is what she wants and she understands what she is asking for, those sorts of things. Women don’t take this lightly. They didn’t then and they don’t now.

Carolyn Egan, in her 60s

Who she is: A political activist known for her work as a feminist and trade unionist, in the 1970s she was a prominent abortion activist who helped set up the Immigrant Women’s Health Centre—a ground-breaking clinic that provides culturally sensitive and language-accessible sexual health services.

A lot changed in 1969 [when therapeutic abortions were legalized]. If you were a middle-class woman, upper middle-class woman with access to a private gynecologist or well connected to the healthcare system, things would go fairly smoothly for you. If you weren’t, it was really, really difficult. There was very uneven access to abortion. You would have a situation where hospitals might have a gynecology clinic, for example, and they would have an appointment at 8:30 in the morning. That would be extremely difficult for someone in high school or working in a manufacturing plant or anywhere where you couldn’t have easy access to a phone and in those days, you would just have to dial and dial and dial because you would get the busy signal over and over and over again. Often you’d finally get through and all the appointments for that day would be gone. We would have a lot of women who would go to Buffalo, N.Y. to pay money to clinics that were established in that area and offered abortion to Canadian and American women. But then you had to have the resources to be able to pay that and an awful lot of people might not have that.

If a [woman’s life or health] was threatened, she could have a therapeutic abortion, but that was interpreted in different ways by different therapeutic abortion committees. It was often racially and class biased in its interpretation and how it would move forward. [The discrimination] was a terrible situation that a lot of women were facing.

During the whole campaign to overturn the federal abortion law, once we set up the clinic with Dr. Morgentaler on Harbord Street in Toronto, it was not covered by [OHIP] the clinic would do a sliding scale often for nothing, but very often we would have anti-choice, people who were opposed to abortion blockading the clinic, harassing women trying to access the clinic, sometimes it would be up to 80 people just trying to block the door, not allowing them in, yelling ‘baby killer’ and that type of thing to women who were trying to access it. That clinic became a symbol of women’s resistance to an unjust law. I’ve often said that the real heroines of the era were those women who chose to use what was deemed an illegal clinic because they felt that was the only place they had that easily offered it to them.