How Second Cup is trying to save its business

How the Canadian coffee chain is redoubling its efforts to stay relevant in a highly caffeinated marketplace. 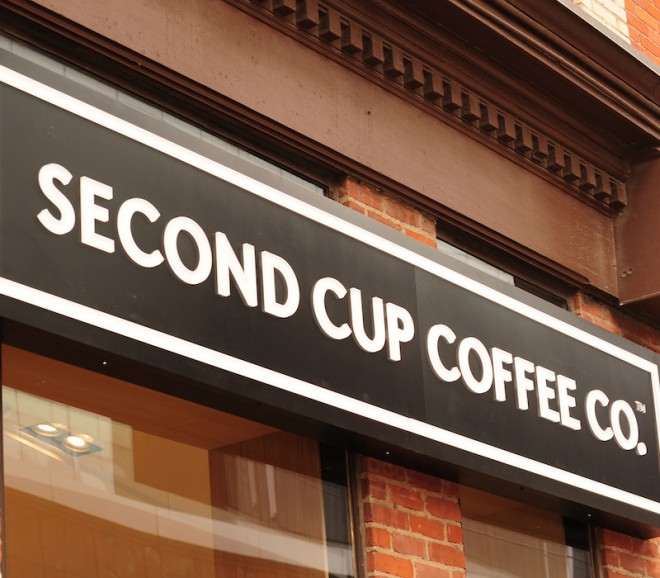 Let’s play a quick round of word association: When I say “Canadian coffee,” which chain comes to mind? I’ll bet a toonie it’s Tim Hortons, the brand whose namesake is a hockey player and has elevated a coffee order, the “Double Double,” to our national lexicon. But what of Second Cup? Lately, Canadian coffee drinkers seem to be asking the same question.

At its peak in the 1990s, the chain had roughly 400 franchises nationwide, but as of 2015, that number plummeted to 310. It only makes sense, given the can’t-miss ubiquity of Starbucks and McDonald’s dollar-coffee pricing, that Second Cup’s stock price has fallen by more than 30 per cent in 2016 alone. Throw in legal spats with franchisees, and a $5.99 million debt facility due January 1, 2017, and there’s no denying Canada’s other favourite coffee chain is experiencing a serious rough patch.

Now, the brand is relying on new leadership and appealing goodies to win back its base. Under new CEO Alix Box — a former exec at Holt Renfrew and, yes, Starbucks — Second Cup has invested in reimagined stores and yummy treats as a way to win back its share of the highly caffeinated marketplace. Below, a few of the coffee chain’s newest, hail-Mary initiatives.

Related: 4 iced coffee hacks that will save you money

New coffee. Having been the first chain to launch flat whites in Canada, Second Cup has always fancied itself at the forefront of coffee innovation. Under the umbrella of its #BetterNotBitter campaign, the brand launched Batch 49, two new roasts (medium and dark) that wink at Canada’s national latitude. This summer also saw the launch of a pumpkin spice frappé, beating Starbucks’ much-anticipated PSL roll-out to the punch.

Cool stores. With a “cafe of the future” aesthetic in mind, the brand has outfitted 14 franchises — including the downtown Toronto flagship — with a sleeker design and palette (and phone chargers). Each features an open-concept “slow bar,” which gives customers a 360 view of their pour, a glass-ed in treat bar, and walls emblazoned with murals by local artists. (The King and John location in Toronto nods to both TIFF and the area’s famed Second City comedy club.)

Trendy, local treats. In keeping with the brand’s new emphasis on local, Second Cup partnered with small bakeries near each of its franchises to produce “fresh, never frozen” treats. At press time, about 80 per cent of the chain’s baked goods are locally sourced, including the new pumpkin hand pies (because fall) and a $4.25 egg white, pesto and Swiss cheese breakfast sandwich on naan.

Customer rewards. Who doesn’t love points? Second Cup’s rewards program, launched in April 2015, affords customers a free drink for every 50 dollars spent. Just over a year in, the program now accounts for more than 20 per cent of the company’s revenue.