We Tried Cricket Ice Cream: After All, It's The Food Of The Future

Cricket ice cream looks just like the good stuff, but does it taste the same? 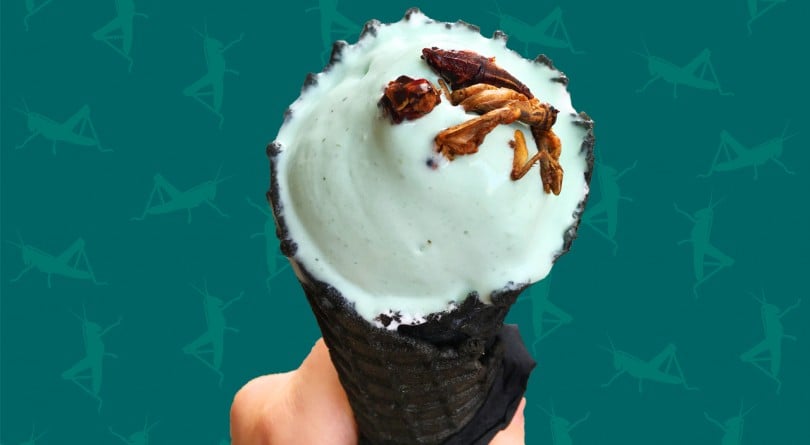 But that’s starting to change. This past week, a mint green ice cream truck in Toronto served frosty confections filled with ground up crickets. In lieu of maraschino cherries or rainbow sprinkles, it topped its cones with crunchy crickets and grasshoppers.

The insect-laden ice cream was a marketing stunt for Toronto’s inaugural EDIT expo— a future-focused festival of design, technology and innovation. Despite my apprehensions, I never say no to ice cream, so I tried some.

The ice cream was dyed green (to match EDIT’s branding) and it was nearly impossible to tell the rich and creamy vanilla dessert contained anything creepy crawly. There was nothing strange about its texture and I happily licked it up as it dripped down the sides of my on-trend black cone.

For many around the world, eating bugs is nothing new. But Toronto-based brothers Eli and Lee Cadesky, who made and served the ice cream aboard the EDIT truck, sell foodstuffs filled with crickets and mealworms and they’re among those trying to get folks in Canada and the United States to start integrating insects into their diets.

Lee and Eli speak enthusiastically about insects’ potential as an alternative and sustainable protein source. For the past few years, bugs have been lauded as the food of the future. Insect farms, they explain, take up a relatively small ecological footprint in comparison to those used to raise other types of animals.

While Lee was completing his master’s degree in food science at Cornell University, he created a product he calls texturized insect protein (TIP), which he says browns like beef and crumbles like feta. It can be used as a dairy, meat or egg substitute. He teamed up with Eli, who has an MBA, to bring it to market. For the EDIT truck, the Cadeskys replaced 10 percent of the ingredients normally used to make ice cream with TIP.

Along with making ice cream, Lee and Eli sell TIP, insect protein powder and cricket flour through their Toronto-based company C-fu Foods Inc. They also make cricket and mealworm bolognese via their One Hop Kitchen line and hope to introduce more food products, such as a cricket “hop” dog, soon.

One Hop Kitchen sells its bolognese sauce in Toronto-area farmers’ markets and it’s also available online, at the massive Loblaws inside the former Maple Leaf Gardens building and at Goodness Me! locations in Ontario.

Since launching in 2014, they’ve seen consumers become more aware of insects as food. The first hurdle, however, is getting people to try them. Free ice cream seems like an easy way in.

FILED UNDER: Editor's Picks Instagram products We tried it