How to make the most beautiful—and delicious—house this season.

Beatriz Muller is an architect and engineer, but not in the way you’d think. In place of bricks and mortar, she uses gingerbread and icing. Out of a garage workshop in her Innisfil, Ont. home, Muller creates intricate buildings made from the holiday-favourite treat. She’s been running her bakery, Cakes By Beatriz, for more than 15 years. But once the holidays hit, she and her staff (referred to as “gingerneers”) are back in service with custom orders for gingerbread art.

Muller is a gingerbread champion—most recently, she won second place at the National Gingerbread House Competition in North Carolina (where she placed first in 2016 and third in 2017). In 2018, she competed on Food Network’s Holiday Gingerbread Showdown and walked away with the $25,000 cash grand prize. By the time she ventured into the gingerbread circuit, she’d already collected accolades in various wedding cake competitions. “And then I kind of got bored,” she says. “I was always doing small gingerbread houses, and one year I said I’m going to make one that’s bigger.” Someone told her about the competition in North Carolina, where 150 gingerbread enthusiasts were ranked in creativity, difficulty and precision. She submitted her piece—a two-foot-tall “Dream House” inspired by the painter Daniel Merriem that she spent 340 hours constructing before driving it down to North Carolina—and she won. “It snowballed from there.” 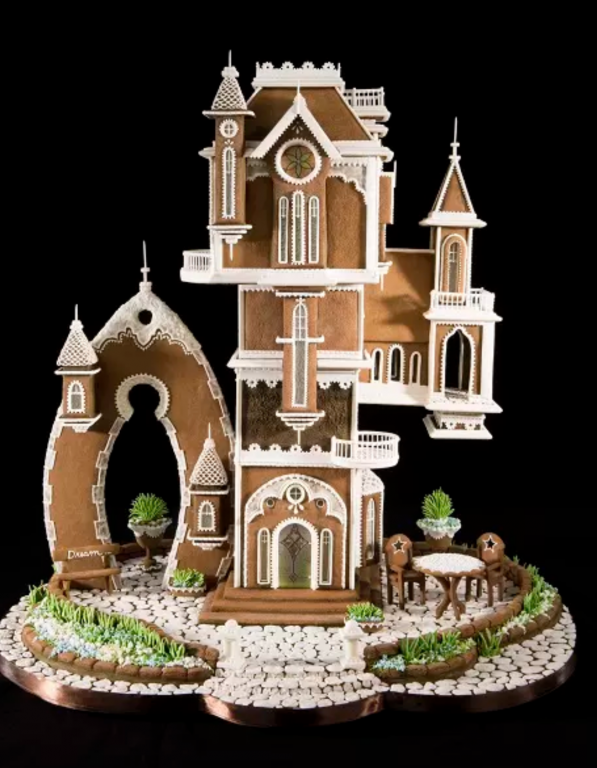 From Christmas trees to European-style homes to an edible replica of New York City, Muller is somewhat of a gingerbread queen. So we asked her for her best gingerbread house building tips.

Muller says the typical template found on the internet tends to be A-frame style houses, meaning four walls and an A-shaped roof. “When I use paper templates I cut them a little bigger. I make the dough, I roll it to a quarter inch [in thickness]. That’s the size that I use unless they’re really big buildings, and then I’ll go a little thicker. But a quarter inch is fine for the average house.” She cuts the templates a little bigger—an extra quarter inch around—because the type of gingerbread she uses tends to spread once in the oven, and the edges dry quicker than the middle. This way, she can trim the edges and have enough consistent gingerbread to work with.

“I use real gingerbread, not construction gingerbread [like the ones you find in the gingerbread kits at the store]. If you eat it, you won’t break your teeth. I believe that any edible art should be edible. I make everything—even the biggest buildings—with soft gingerbread cookie. Because I do that, it spreads in the oven a little bit so the edges dry sooner than the middle, even if you bake at a lower temperature.” She likens the consistency to butter cookies—it melts in your mouth, but it’s firm to the touch. “A lot of people are afraid of making that type of cookie when building because they think you need hard cookies to make the house, but you really don’t. All you need is just a few tricks here and there to make a beautiful, edible piece—and yummy.”

Want to experiment with different cookie hues? Use food colouring

Muller relies on a German recipe for molasses gingerbread—one she says she’s been using forever—to create a dark brown cookie. For a lighter-looking one, she uses a recipe for honey gingerbread (and usually uses white sugar). She also, on occasion, adds food colouring to the latter recipe. “I put in a little colour. I make blue and red, you can give colour to gingerbread and it’s beautiful,” she says. 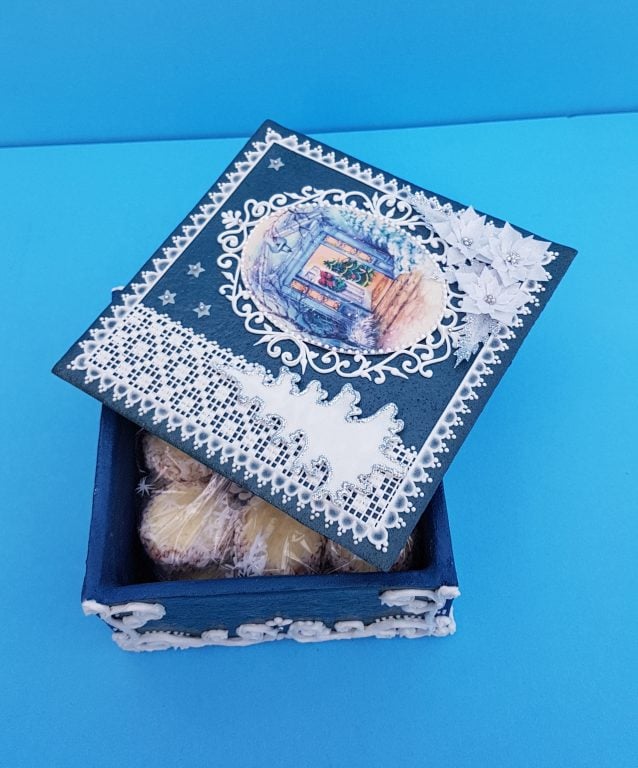 Use royal icing as glue

“Different people have different ways of doing it, I’m sticking with royal icing. I always use it, I think it’s the strongest,” says Muller. (Some people use caramelized sugar, she notes, but the problem with that is the effects are quickly permanent once glued. “If it’s crooked, it stays like that. You can’t move it.”) As for using melted chocolate, she says it’s messy and hard to clean. “When it’s neat and clean, that’s when it looks the best … so I just prefer royal icing, it’s easy to clean and it glues very strong.” She cautions against applying the icing too thick as it dries quickly and the gingerbread won’t have enough time to absorb it—which makes it more likely to come apart in the long run. “The softer it is, [the better] it adheres to the surface.”

Use supports—like you would for a real house

Look at the way houses are made—real houses—and that’s where you’ll put the supports for the roof. “Make beams out of gingerbread and support [the roof] with that,” she says. “If you see the cookie start bending, that’s where you put the support.” After she trims all the gingerbread pieces to their exact measurements, she also seals the cut edges with royal icing—as though she were painting them. “It looks nice [and] neat.”

“The final step should be gluing everything together and doing the final touch-up. Seams need to be sealed, piped, but decoration is done flat on the table,” Muller says. “You need support in your hands, if you’re piping without the support you can never get the accuracy that you’re aiming for. When it’s flat, you have the support of your hands or elbows on the table, the angle of the hands, it doesn’t shake.”

Muller’s gingerbread house style is architecturally European, and most of their decorations are done with royal icing—very rarely does she use candy. She favours white icing for her embroidery and lace designs, but once in a while, she’ll use colour. 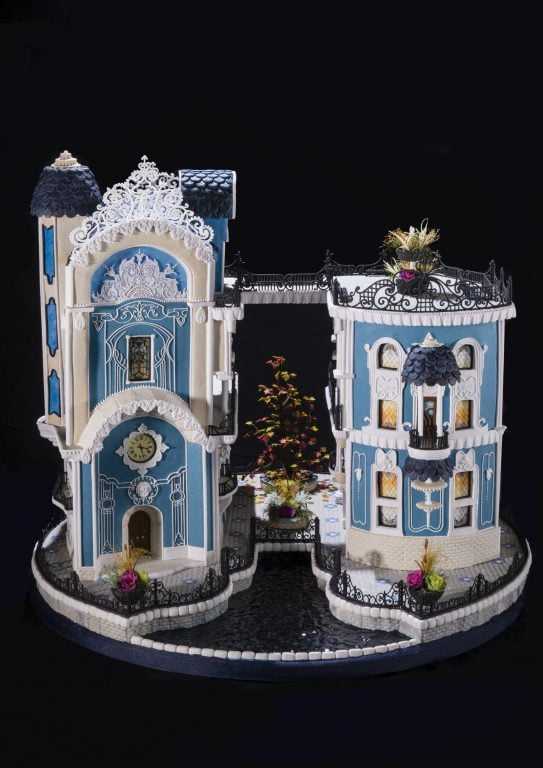 Muller says you can glue together a standard 5-inch tall house all at once. But with an 8-inch tall house, she suggests gluing the walls and then waiting at least five hours before attaching the roof. And ideally, you shouldn’t move the house for at least 24 hours after you’ve finished it.

For those new to the gingerbread scene who are daunted by bigger projects, try Chatelaine Kitchen’s Gingerbread Cookie Tree to start. It makes for an impressive table centrepiece and is more forgiving to make. Readers can also use this classic gingerbread recipe to make houses, but roll out the dough to a quarter inch thick to make them sturdier. This may increase bake time.