What’s The Best Way To Order Takeout Food? From DoorDash To Uber Eats, We Break Down The Options

A restaurant owner explains how to best support your favourite independent eateries. 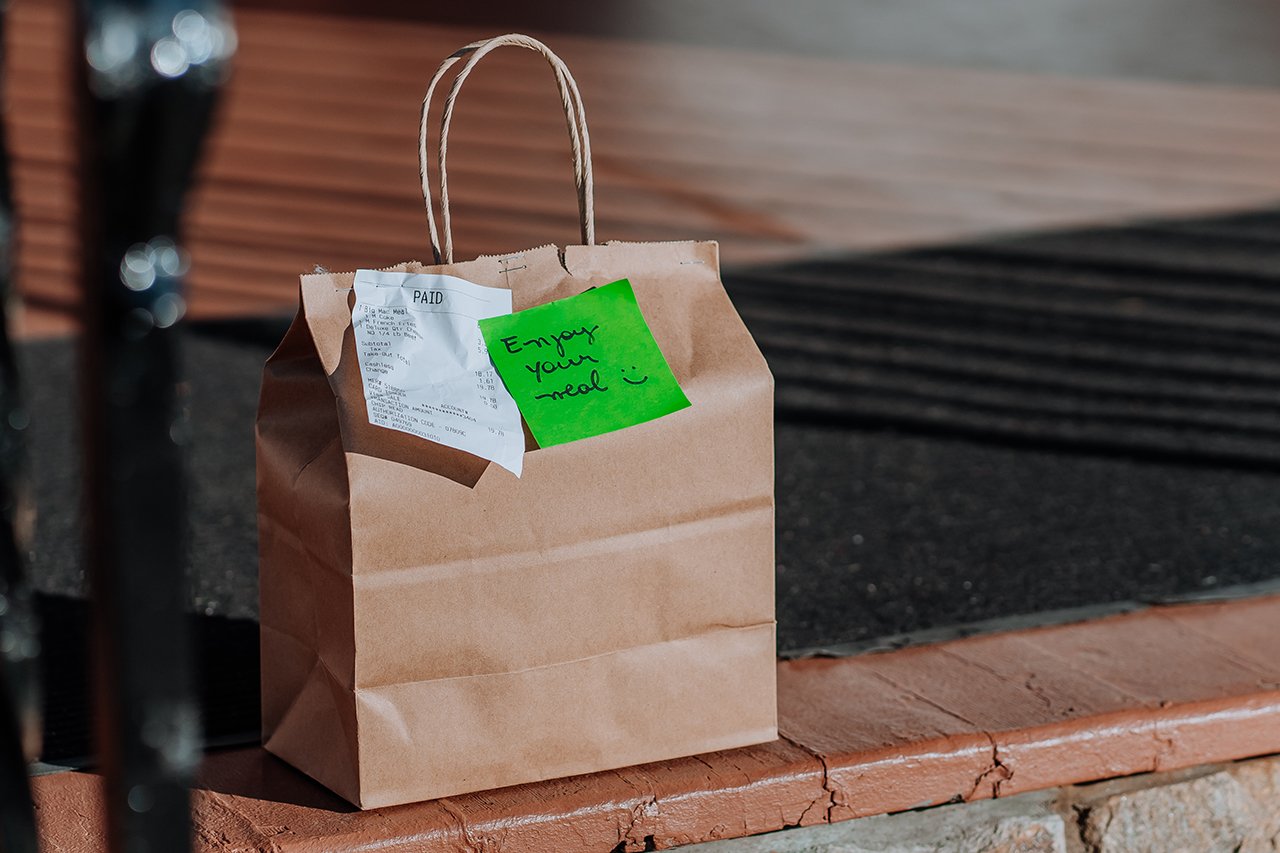 While the popularity of online ordering and delivery apps has been growing in recent years, their use was accelerated by COVID-19.

But while they may seem like a lifeline to the struggling restaurant industry, they also come at a cost, eating into desperately-needed profits.

Michelle Lee is the co-owner-operator of Kimchi Korea House in downtown Toronto. Prior to the pandemic, the no-reservations first-come, first-served restaurant’s clients had predominantly been students, office workers and out-of-town visitors. The co-chef and restaurateur says dine-in service accounted for approximately 98 percent of revenue pre-pandemic (about 400 customers a day). Now relying strictly on takeout and delivery as a result of Ontario’s public health measures prohibiting indoor dining, Lee says the family-run business has only been able to bring in about 30 percent of their 2019 revenue post pandemic, with most of those sales via a third-party delivery app (apps).

Hers is like many restaurants hard-hit by COVID: The food service industry is the fourth-largest source of private sector employment in Canada—and also where a third of the workforce lost their jobs.

If you’d like to help support your local restaurants, it’s not as simple as using your favourite delivery app—instead, there’s a better way that will help them earn more income from your order. Here’s what you need to know.

Unsurprisingly, apps are proving to be an essential revenue stream for many independent restaurants who’ve experienced an unprecedented number of takeout orders during the pandemic. In a report published in November 2020 on the impact of COVID-19 on the food industry and e-commerce, the Agri-Food Analytics Lab at Dalhousie University found a 45.5 percent increase in online or apps use when they compared the eating habits of the 7,290 Canadians surveyed early in the pandemic versus six months prior. That’s approximately 4.2-million more Canadians using mobile services for curbside pickup or home delivery.

Kimchi Korea House’s Lee says that early in the pandemic she tried to entice regulars by offering a discount with pick-up orders, however many of her customers said that they weren’t interested in the hassle, and that they actually didn’t mind paying more for food they ordered through an app or delivery service

When asked about their decision to outsource delivery to apps instead of offering their own service, Lee’s daughter, Diana, says that their business model is based on volume.

“Having our own delivery service is not feasible because of all the little sales,” Diana says. “For now we’re relying on the delivery apps to sustain us until we open again.”

For full-service restaurants already dealing with business operations and takeout, managing in-house delivery would be incredibly demanding, not to mention, expensive: There’s hiring, training delivery drivers, customer support, payment processing fees, plus labour and insurance costs. If a business was to create their own user-friendly delivery app it could cost upwards of $60,000. For most small businesses, it doesn’t make any financial sense.

For operators, an easy and streamlined way to add off-premises services quickly is through partnering with an app.

But the use of apps is a sensitive topic. Consumers have come to recognize that most restaurants operate on razor thin-margins in pre-pandemic times, and while apps might usher in a new revenue channel that these businesses hadn’t explored before, the sales generated don’t generally match what the operator was able to bring in pre-pandemic with dine-in service. And then there’s the cost associated with using one.

The true cost of food delivery

There is a general misunderstanding that apps are highly profitable for the companies that operate them. And an Angus Reid/Dalhousie survey from January 2020 found that nearly two-thirds of respondents (64 percent) believe the prices on these apps are too high. Depending on the apps, consumers could be charged a service fee and a delivery fee in addition to the menu price of their food, plus there’s an option to contribute tips to the restaurant or their frontline delivery driver.

So, in researching the true cost of on-demand service, it was interesting to learn that companies, like market leader DoorDash and Uber Eats, are actually losing money. While the delivery services do split the costs in a typical food-delivery transaction by charging delivery fees to the customer, and taking a commission from each bill from restaurants, they don’t profit the same way they would when taking a fare from a rider then paying a driver.

Numerous articles have been published about the fees restaurants are charged for being on apps, some as high as 30 percent commission on orders. In response to a general backlash, those fees were capped at 20 percent of the order value in December 2020 for any jurisdictions in Ontario where indoor dining has been prohibited. Similar measures have been taken in other provinces.

“We had no prior experience with [apps], so we signed up for the ones we thought were most popular,” Diana says, noting that commission rates ranged between 20 to 30 percent last March. To rectify this, some independent restaurants absorb those costs by increasing the prices of their delivery menu.

“It’s really up to each individual restaurant to see if they can absorb the cost of commission,” Diana says explaining that for Kimchi Korea House it was the decision to serve a reduced menu, omitting dishes that aren’t as cost effective or are operationally not feasible with a skeleton crew.

There are different ways to access food delivery services, with consumers and operators becoming more savvy about how to traverse the system to minimize fees charged. The standard order through apps typically includes charges to the restaurant and the customer (namely, service and delivery fee). To understand where these user fees go, representatives from both DoorDash and Uber Eats said the delivery fee and driver tips go to the driver, while the service fee and commission fee taken in by the apps is used to pay the remainder of the driver’s wages, insurance, overheads and extras such as PPE.

So what’s the most effective way to support local restaurants?

Ordering takeaway directly through the restaurant is the most effective way to support local restaurants.

Another alternative is to order through an app-affiliated link via the restaurant’s webpage or Instagram page. The order does get processed by the apps, but the restaurant is charged a reduced commission. Diana created a mini tutorial about this lesser-known option (embedded above) as a resource for other restaurant owners and for general consumer awareness.

I wouldn’t put any one at fault who chooses to use the app because they were developed for convenience,” Diana says. “We’re grateful for them because it’s sustaining our business. I think customers should be aware that these apps take commission, and if it’s possible that they pick up, to pick up. But at the end of the day if they can’t pick up, we would prefer having a sale over nothing at all.

Here’s a closer look at a selection of apps who are serving Canadians the most.

Founded in 2013, the San Francisco-based food ordering platform is one of the country’s most downloaded apps .
Cities Serviced: 150+ Canadian cities and surrounding neighbourhoods, covering 75 percent of the country
Service Fee to customers: Variable, but based on a percentage of the order
Delivery Fee to customers: Depending on distance, ranging from $2 to $5
Merchant Fees/Commission: Recurring monthly fee, flat fee per order, or commission based (currently capped at 20 percent); has reduced or waived service fees for some independent restaurants during COVID-19 and provided over $1-million in relief grants to help Canadian restaurants
COVID-19 support: Free PPE for couriers, two weeks of paid sick leave for those affected by COVID-19

This homegrown app was founded in Vancouver and specializes in East and Southeast Asian cuisine, groceries and daily essentials. Note, the app is written in Chinese and English, however some menu items may not have English translations.
Cities Serviced: Greater Vancouver Area, Greater Toronto Area, Edmonton, Calgary, Montreal, Winnipeg, Halifax and other metropolitan areas
Service Fee to customers: $1.50
Delivery Fee to customers: $2.99 within 7 kilometres
Merchant Fees/Commission: Approximately 20 percent currently due to the government cap, with slight differences between provinces
COVID-19 support: Free PPE for couriers

Also known as F.O.D., 90 percent of the platform’s merchant partners are East and Southeast Asian restaurants. The Toronto-based company also has a virtual liquor store, and offers groceries and daily essentials. The app is available with English and Chinese functions, however some menus may not have English translations.
Cities Serviced: Greater Toronto Area, Waterloo and Mississauga coming this June
Service Fee to customers: Variable, but based on a percentage of the order
Delivery Fee to customers: $0 for select partners or within 5 km in downtown Toronto or 8 km for other areas; otherwise $2.99+
Merchant Fees/Commission: 13- to 20 percent depending on the location (with downtown being higher due to operation costs)
COVID-19 support: Free PPE for couriers

The Winnipeg-based food delivery service with the Jon-Hamm-starring ads was founded in 2012; it has the largest food delivery network in Canada.
Cities Serviced: 100+ cities and their surrounding suburbs; in all 10 provinces (but not the territories).
Service Fee to customers: $0.99 (B.C. only)
Delivery Fee: $2 to $5
Commission Range: 20 percent or less for local independent restaurants, and 10.5 percent commission for partners who have their own drivers (only while dining rooms are closed).
COVID-19 support for contractors: Free PPE for couriers

Leverages their network of drivers and platform (using the same account and payment method as Uber).
Cities Serviced: 30 cities and surrounding suburbs; not in NFL, NB, PEI or the territories
Service Fee: $2.50 to $4.50
Delivery Fee: $0 to $5
Merchant Fees/Commission: 20 percent (provincial cap or for small businesses where there’s dine-in restrictions) for the full-service option; have waived activation fees and reduced fees for restaurants that offer pick-up or have their own couriers
COVID-19 support for contractors: Free PPE; up to two-weeks of financial assistance for those affected by COVID-19

This app is focused on takeout orders that are picked up by customers without needing to wait in line. (Note: Delivery through Ritual is powered by DoorDash.)In 2020, the company partnered with The City of Toronto and waived set-up and subscription fees for local businesses who joined the platform during the promotional period.

Other costs and concerns

Besides the obvious things that are out of a restaurant’s control once the food leaves the premises, like food order temperature or if the product arrives pristine in its package, the shift to online orders has also created a new scenario that makes restaurants vulnerable to a new type of scam: virtual dine and dash. Here, a customer places an order then either tells the apps that the order was incomplete or disputes the charge with their credit card company for a refund. Typically, the restaurant has to eat the cost of the chargeback. Some operators have reported staggering amounts lost due to scam or fraudulent credit card activity, others, theft (i.e. food stolen by drivers). Closer to home, Toronto Pho shared their experience with fraudulent Uber Eats claims.