How To Prep Your Freezer For Winter, Russian-Style

Uniquely designed for long winters and scarcity, Russian cuisine is infinitely more varied than borsch and caviar. Here’s some staples to get you started. 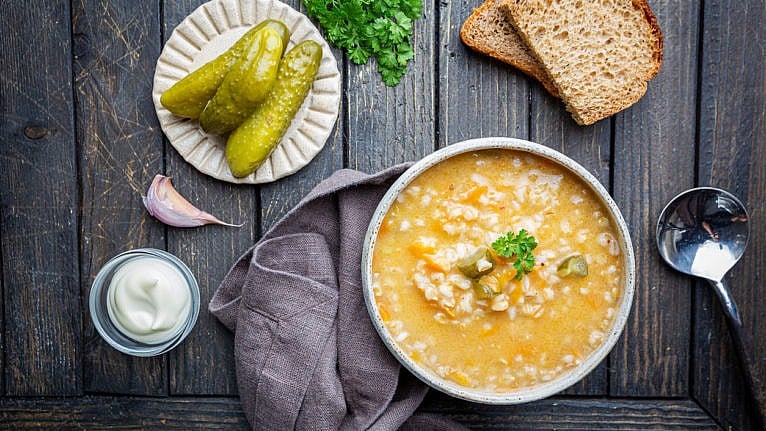 My Soviet grandmothers couldn’t even imagine freezers when they raised their kids in the post-war USSR, where fridges weren’t widely available until the 1950s. They were considered lucky to have cellars, which they filled with cabbages, potatoes, sauerkraut and pickles. But if they’d had chest freezers, you can be sure they’d have stocked them with piles of blinchiki (stuffed crepe rectangles) and kotlyeti (fried ground meat patties). Russian food is uniquely designed for long winters and scarcity, from filling and affordable cabbage shchi soup to pelmeni, Russian dumplings reportedly hung outside windows across Siberia, and long-lasting grains like buckwheat.

More than a half-century of kitchen conveniences later, many of my family’s meals are the same ones my grandmothers served up. When rumblings of a pandemic started I rushed to stock up on those staples weeks before toilet paper hit the headlines. Essential ingredients like cabbage, potatoes and ground meat are easily available for pandemic shopping and store well.

With its rich landmass and centuries of trading history, Russian cuisine is infinitely more varied than borsch and caviar. With winter looming, it’s a good year to get your babushka on and embrace foods that have kept generations of Russian peasants and then Soviet citizens alive—now with the benefit of Tupperware and freezers. If you live in a bigger city centre, you can often find pre-made meals in Russian stores. (Hint: They often call themselves European stores, not Russian.)

The ultimate freezer food, Russians would be lost without this requisite meal opener. These hearty, meal-worthy dishes need nothing more than an accompaniment of buttered black rye. If you have an InstantPot, put it to work here. Infinitely adaptable, often affordable and easily entire meals unto themselves, there are as many variations on these recipes as there are Russian babushkas. Below are just a few examples of beloved soups that freeze well and check all the comfort food boxes.

Shchi
Cabbage soup with a sauerkraut twist, shchi is a quintessential Russian soup made with either cabbage or a combination of cabbage and sauerkraut, plus beef, potatoes and carrots. Fermented sauerkraut gives a more traditional Russian flavour, but you can get away with any non-sweet, grocery store version. Top with a dollop of sour cream and dill. Here’s a recipe from Darra Goldstein, the doyenne of Russian cooking.

Rassolnik
Another much-loved staple with pickles and barley. Traditionally made with pork or beef kidneys, you can sub in regular beef bones or brisket. Much like shchi, rassolnik’s flavour depends on the pickles. (Tip: freeze the brine from your next pickle jar to boost its tartness.) Russians favour half- and and full-sour pickles, but regular jarred dills are normal these days—just avoid sweet gherkins or bread-and-butter pickles. Top with, of course, sour cream and dill. Try this version from Alissa Timoshkina’s Salt & Time.

Kharcho
Kharcho is actually a Georgian soup, popularized by the Soviets in an attempt to create a cohesive national identity through the kitchen. It’s a hearty rice-and-beef concoction, featuring a traditional Georgian herb mix of tarragon, dill and cilantro, with a sour kick, usually from tamarind or lemon. Add another round of fresh herbs and a squeeze of lemon when serving. Natasha’s Kitchen has a great recipe.

Solyanka
Another soup centred on sour flavours, solyanka features the trifecta of pickles, black olives and capers, along with a meat of your choice (typically, sausage and/or beef), and tomato paste. Like all these soups, the stock and specific vegetables are flexible for whatever is in the fridge—just stick within a Russian “palate” (potatoes, cabbage, carrots, tomatoes). Try this take from Leah Koenig in Saveur magazine.

Stuffed Blinchiki
A more involved process upfront, but well worth the pay-off, blinchiki are crepes wrapped around a savoury meat-and-onion filling. In our family, that’s traditionally been chicken, which is pre-cooked separately. To serve, defrost and fry. Try sour cream or a Soviet mix-and-match with adjika, a spicy red pepper sauce from the Caucasus, as toppings. Here’s a fave recipe with meat.

Pelmeni
Not to be confused with pierogies, these are Russian-by-way-of-Siberia dumplings, filled with uncooked ground meat, in varying combinations of pork, beef or lamb (though turkey pelmeni are commonly found in Canadian Russian stores). Pelmeni are smaller and rounder than perogies—a half-moon folded back on itself, or a hexagon rolled out over a metal pelmenitsa mold—with a much thinner dough. Boil and serve in a light broth, or, more commonly, on their own swimming in butter and sour cream. Find pelmeni in the freezer section of your local Russian store. If you’re feeling ambitious, making your own is a sufficiently time-consuming afternoon activity for a wintery weekend. Alissa Timoshkina’s Salt & Time has a great recipe for these.

Piroshki
A common street food in Soviet days, every mother had her own recipe for these stuffed buns of fried dough. Filling options are plentiful—cabbage, potato or meat are the most common, with apples for a sweet version—and they can be baked or fried. While best eaten fresh, they can be frozen, too. Reheat in an oven or toaster oven (please, skip the microwave). Here’s a cabbage version from Peter’s Food Adventures.

Kotlyeti
A go-to of mothers, grandmothers and Soviet kindergartens alike, kotlyeti are essentially oblong meat patties made with beef or chicken, minced onions and bread crumbs. Though Soviet shortages dictated cranking your meat through a grinder yourself, store-bought ground meat ups the convenience element. Like meatballs and burgers, kotlyeti freeze well and can be defrosted and fried on a moment’s notice. Serve alongside buckwheat, or boiled or mashed potatoes. Renowned cookbook writer Anya Von Bremzen has a recipe over at Epicurious.

Poppy seed roulette
Popular across eastern Europe, poppy seed rolls are made of a yeasted dough rolled around a poppy seed filling. They’re a perfect freezer stand-by, whether you need it for unexpected guests (in a post-pandemic world) or just emergency, late-night cravings. No judgment if you decide not to share. Try this version from Natasha’s Kitchen.

Here are a few favourites I turn to regularly, to build up your Russian cooking expertise. If you pick up only one, either of the first two options will serve you for life. Von Bremzen’s was the first book I ever cooked from, and remains my go-to alongside A Taste of Russia—second only to a phone call to my mother, natch.

A Taste of Russia: A Cookbook of Russian Hospitality, Darra Goldstein (2013)
Please to the Table: The Russian Cookbook, Anya von Bremzen (1990)
Salt & Time: Recipes from a Russian Kitchen, Alissa Timoshkina (2019)
Beyond the North Wind: Russia in Recipes and Lore, Darra Goldstein (2020)
Kachka: A Return to Russian Cooking, Bonnie Frumkin-Morales with Deena Prichep (2017)

If this seems like a meat-heavy rotation, the soups can all be made into vegetarian versions by using a vegetable stock (mushroom stock fits the Russian flavour profile perfectly) and just omitting the meat. All these meals would typically be served with sides, especially pickled vegetables, potatoes and buckwheat. Fried items, though not as tasty, can often be baked.

To round out your Russian pantry, stock up on fermented foods: sauerkraut and pickled tomatoes, cucumbers and pattypan squash will get you started. Add in a variety of pickled herring, smoked fish (mackerel is a popular favourite) and canned fish, such as smoked sprats, which goes perfectly on buttered rye bread. Russians have many salads, most often served for festive occasions, but the most simple for a weeknight dinner is tomatoes, cucumbers, onions and sometimes radishes, with either a sour cream dressing or sunflower oil dressing (buy a Russian brand of sunflower oil, which has a strong, nutty flavour and is meant for salads). Na Z’darovye!