Traditional Inuit foods are nourishing and delicious—and the reality of rising prices, supply chain issues and food insecurity makes supporting their harvest all the more crucial. 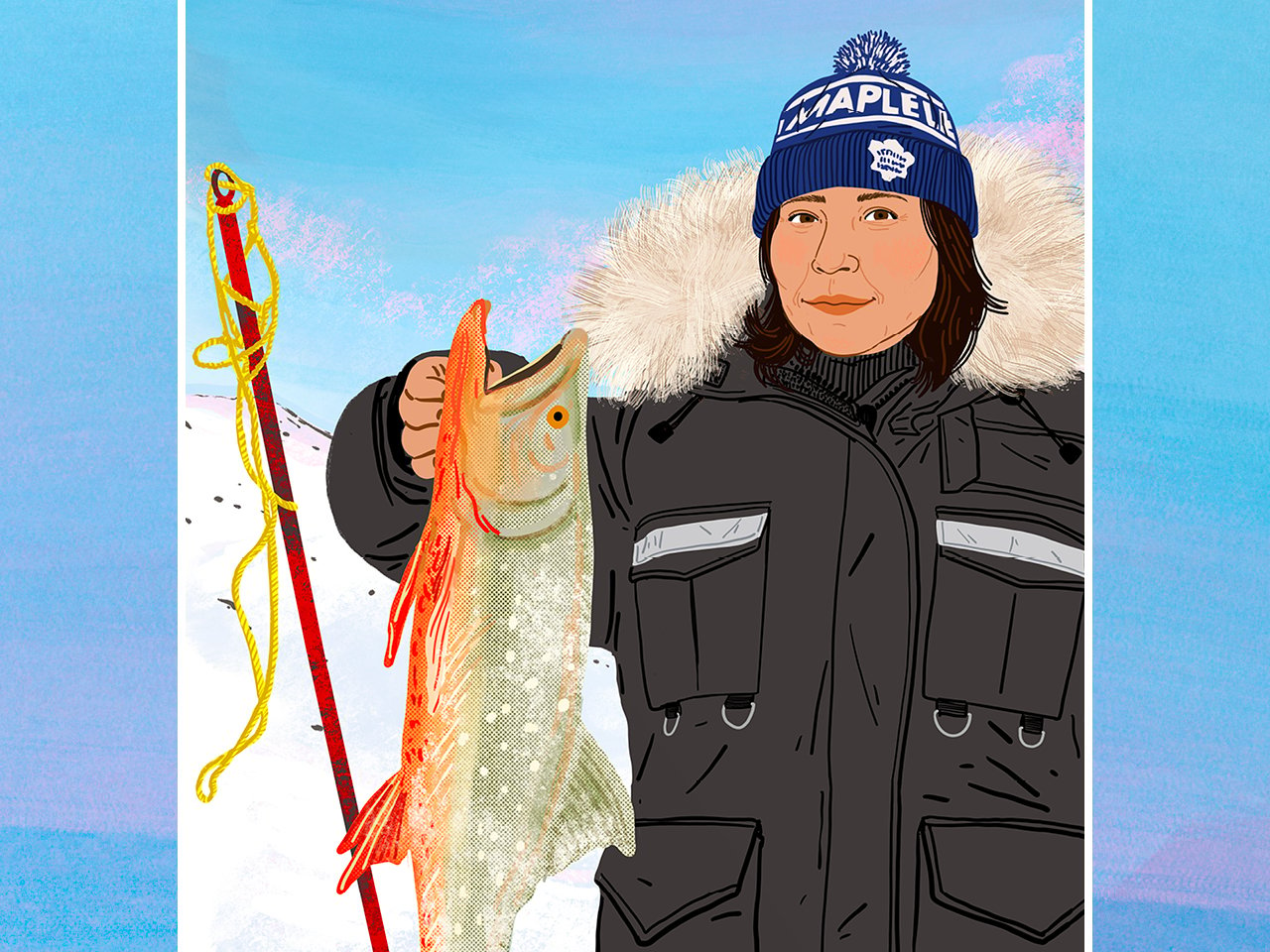 I first heard of Sukanga, a small glacier-fed lake 320 km north of Iqaluit, Nunavut, the year my husband, Johnny, and I became a couple. In April 2008, he called me to tell me about a trip he’d taken with a dear friend. That winter, the fishing for Arctic char was unbelievable, he said: fish after fish on the hook, with sweet, fatty meat that was so deep red. I was living in Ottawa at the time, and it sounded amazing. It took six years, a move to Nunavut and buying a second-hand Polaris 600 snowmobile that burped fumes before I saw it in person.

Johnny hails from Grise Fiord, Nunavut, Canada’s northernmost community. From a very early age, he learned how to hunt and harvest wild foods. I’m of Inuvialuk heritage and grew up in the Ottawa area; aside from butchering a deer in a friend’s Vanier backyard (a whole other story), my hunting experience was quite limited. But once I moved to Iqaluit in 2010, I was immersed in a subsistence lifestyle practically overnight.

Johnny and I started with day trips, and sometimes overnight camping trips, for hunting and fishing, but always stuck close to Iqaluit. As a beginner sled driver, I was quite slow. My husband wondered if there’d ever be a day when I would be able to follow him at the speeds he was accustomed to.

In April 2014, I finally made my first trip to Sukanga with Johnny and eight others on their own snowmobiles and qamutiik, traditional sleds that carry equipment over large distances. I was incredibly stressed but determined to drive the seven-hour trek through mountainous terrain.

When we arrived, I felt accomplished—but like my body had been put through the wringer. We set up the tent and started ice fishing as soon as the men had a chance to drill holes in the ice. And the fishing? It lived up to Johnny’s hype: All it took was dunking a shiny lure into the ice hole and jigging just a little bit to land a huge Arctic char. By the end of the first day, I’d caught about 25 fish. We’ve returned to Sukanga every season we’ve been able to since—and for good reason.

The business of putting food on the table in the Arctic is not easy. The supply chain problems that have affected everyone in Canada since late 2021 have hit us harder. They have driven up the region’s already-exorbitant food prices, which need to be subsidized by the Nutrition North Canada program to put them in the realm of affordability. Without it, a four-litre bag of milk would cost nearly $22; it’s currently $5.89, but I’ve seen it go as high as $12. A jug of orange juice currently costs $10, and a box of diapers is almost $55. It’s still hard to make ends meet and put food on the table—let alone nutritious food.

Supply chain issues can also limit access to tools that help us harvest our own food. Those of us who rely on boats to harvest ocean foods, such as ringed seals, belugas and narwhals, have found that it can take up to two years to buy an outboard motor and have it shipped.

This reality makes supporting our Inuit way of living all the more crucial. Our traditional foods are nutritious: Every animal and plant we consume is wild, organic and full of vitamins and omega-3 fatty acids that surpass anything found in chicken eggs or olive oil.

Sharing our foods is also how we help take care of those who do not have access to the land or ocean. When the pandemic began, many Inuit communities launched programs to give direct financial assistance to individual hunters who share their harvests, as well as to community networks that distribute these foods, especially those that focus special attention on our Elders.

The morning after that first fish in 2014, my body ached so much from the previous day’s labour that I barely managed to get out of my sleeping bag. I ventured out into the already bright, sunny day in the early hours of the morning to try my luck at jigging again. As the morning went on, the weather started to deteriorate; the winds picked up and a storm started coming in. Everyone quickly packed up camp and headed to the nearest emergency cabin to wait out the blizzard overnight. As I lay down to sleep that night, I had to pound my upper right arm with my left fist: It was twitching from hooking so many fish. The next morning we started the journey home.

It was snowing so hard on the way back that there were times when I couldn’t even see my friend Pat’s bright-red jerry cans tied to the back of her qamutiik. When I started to slow down, my sister- in-law appeared to my left. “You have to keep up!” she yelled. Would I be left behind? Would I freeze to death? These thoughts seem preposterous now, but I was truly that scared. I gunned the throttle and prayed to God, my late mother and all my ancestors to guide me and help me not veer off a cliff or crash into a boulder. We made it home.

To this day, not a trip goes by that doesn’t amaze me, or inspire awe. The landscape is so breathtakingly beautiful here. And these days, I can easily keep up. We now have a kakivak, a traditional fish spear, that we used for the first time last year, and it’s so addictive. Regular ice fishing involves dropping your lure through an eight-inch hole and jigging until you feel a tug; unless you lie on your stomach, it’s hard to see fish swim by. When you use a kakivak, the hole is bigger, which accommodates the angle at which you spear and allows you to see the fish easily. The aim is to spear them through the gills, leaving the meat untouched. It is so exhilarating to watch schools of fish swim by. It’s like you want to catch them all.