Each satisfying snap of a Cheezie is rife with nostalgia. For me, the taste of Hawkins is synonymous with childhood summers. 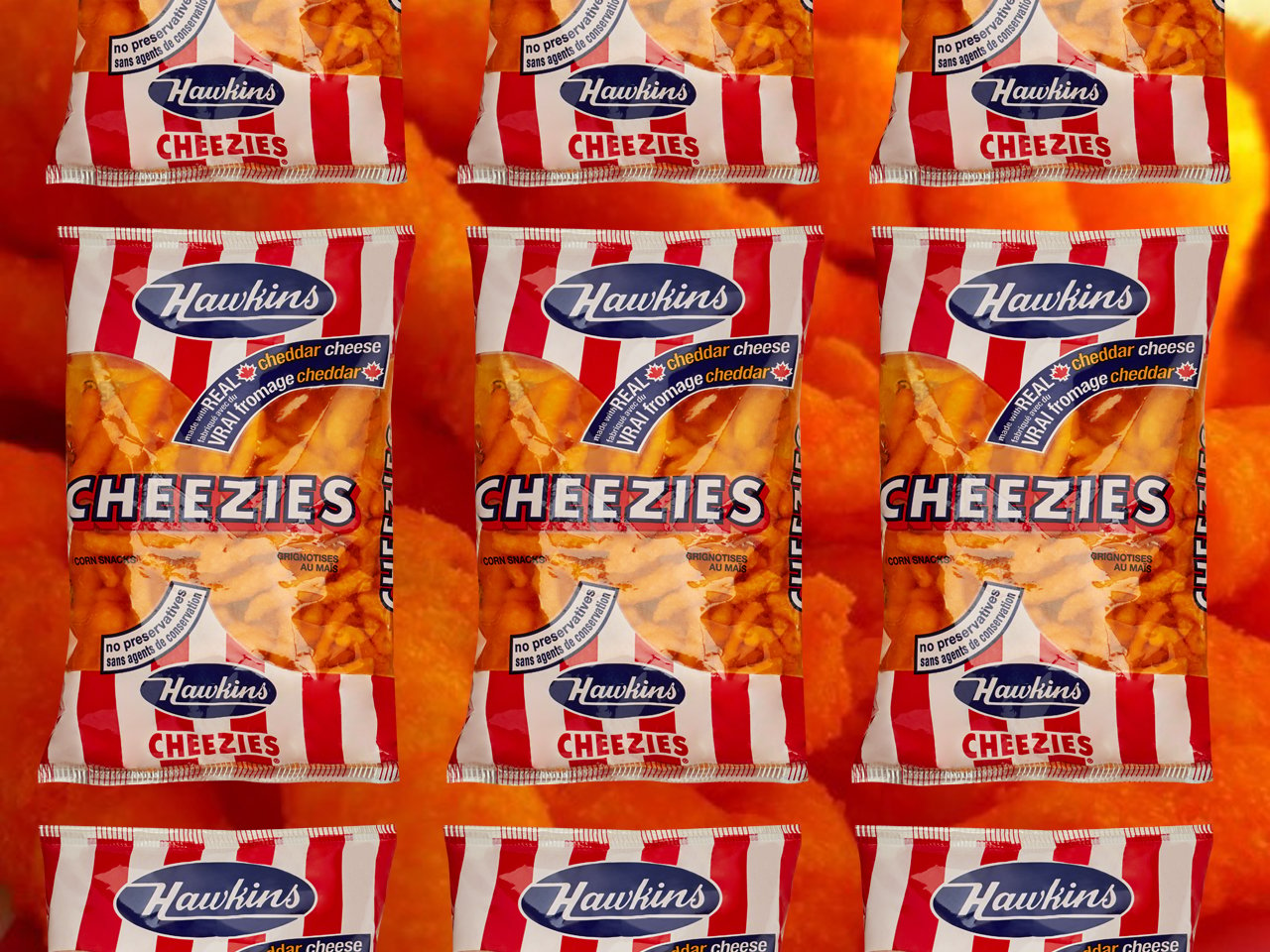 Growing up in the small town of Ameliasburgh, Ont., the aerial TV antenna attached to my childhood home picked up a grand total of three channels, only one of which came in clearly. On Thursday nights at 8., my family would retreat to the living room to watch Corner Gas, dozy family entertainment about the folksy characters populating the fictional Saskatchewan town of Dog River. But the most relatable aspect of the show wasn’t its depiction of kooky bumpkins or the banality of rural life—it was the Cheezies.

Propped up on the titular gas station counter was a rack of orange cellophane bags stamped with red and white circus tent stripes; the unmistakable packaging of Hawkins Cheezies.

Cheezies are conceptually similar to Cheetos—both are long, nubby tendrils of extruded cornmeal coated in violent orange “cheez,” but that’s where the similarities end. Unlike the soft cheese puffs that melt in one’s mouth upon contact, Hawkins Cheezies have a distinct, alarming crunch. They come in endless sizes, from hefty lumps to skinny nibs. Retired plant manager Shirley Woodcox once likened them to snowflakes because no two are alike. But the most significant difference is flavour. While Cheetos taste overwhelmingly artificial, akin to eating a deep-fried packing peanut, something about Hawkins Cheezies tastes, dare I say, homespun.

Each satisfying snap of a Cheezie is rife with nostalgia. For me, the taste of Hawkins is synonymous with childhood summers when my parents would pack a picnic lunch and drive out to an idyllic setting to enjoy a bag of Cheezies washed down with the sickeningly sweet taste of Reid’s Dairy lemonade. I would gorge myself on the salty snack, cognizant of the thick layer of cheese dust accumulating on my fingers, then greedily suck the powder off my fingertips after I’d eaten my fill.

It is perhaps not a coincidence that Hawkins Cheezies happen to be manufactured in Belleville, On., a 10-minute drive from my hometown. I once assumed that everyone had similar nostalgic memories of Cheezie-filled childhoods, but it wasn’t until adulthood I came to realize they’re a relatively under-the-radar snack in Southern Ontario. They’re available in most Shoppers Drug Marts and Loblaws chains—but you have to know what you’re looking for.

The Cheezies factory is located in a squat, bluish-gray brick building that served as a canning factory during World War II. There is no promotional gift shop where tourists can flock to purchase Cheezies merch or discounted product Cheezies, or even as much as a sign on the building to trumpet its existence. The plant is closed on Friday afternoons and weekends. The website has not been updated since 2001, nor is the brand active on social media. From the outside, the company appears totally uninterested in garnering any sort of publicity whatsoever. Yet what would normally spell a death sentence for any other brand only contributes to the mythic lore surrounding one of the country’s most unique and beloved homegrown snacks.

“We were the biggest snack food company in the world,” says company president and owner Kent Hawkins. “My grandfather knew Herman Lay (of Frito-Lay) when he had two trucks.” W.T. Hawkins Inc., originally called Confections Limited, was founded by Kent’s grandfather Willard Trice Hawkins in Chicago sometime in the early 1900s, and had grown to a formidable size through its sales of popcorn, candy and chips by the 1940s. But an acrimonious divorce from his third wife left W.T. Hawkins—and the company he had built—bankrupt. In 1960, he decamped to Canada to focus his attention on his last remaining asset, a small factory in Tweed, Ontario that had begun producing Cheezies in 1949. After a fire in 1956 levelled the Tweed factory, Cheezie production moved to Belleville, where it has been ever since.

In the intervening years, little has changed about the Hawkins Cheezie. A switch from hydrogenated vegetable oil to an oil without trans fats—exactly what kind is a valuable trade secret—is the only nominal change the product has undergone in its 72-year history. “It didn’t affect the taste too badly, and it made them healthier so it was actually a good move,” says Hawkins. Even the manufacturing process by which Cheezies are made remains identical; the cornmeal extruders designed by Cheezies inventor Jim Marker in the 1940s are still in use. “My old production guy says they’re kind of like a ’57 Chevy, he can keep them working forever.” 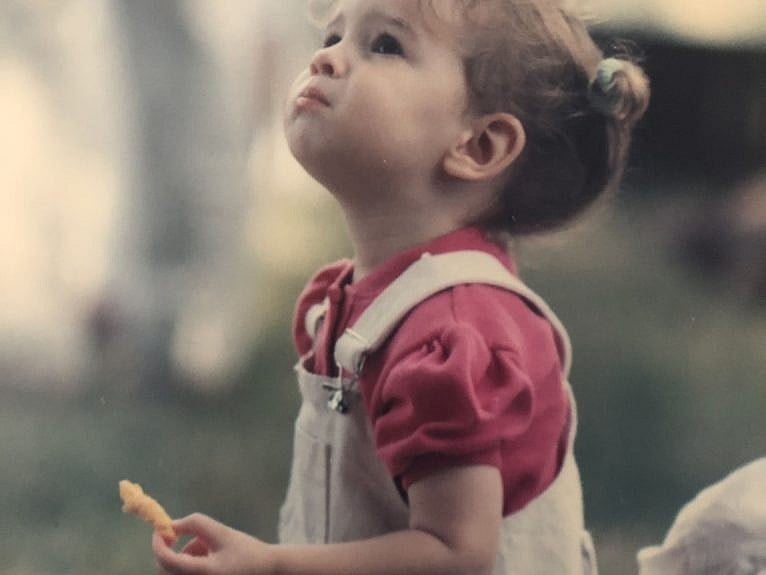 The delightfully nostalgic packaging has remained consistent throughout the years, too. Hawkins recalled that Cheezies used to be sold in clear orange cellophane bags, but the switch was made over to red-and-white-striped packaging sometime in the 1970s. “We put the red and white stripes on our packs one time and for whatever reason, everybody was attracted to that bag, so we put that design on every bag.”

As a result, there’s something deeply comforting about the familiarity of Hawkins Cheezies. On a trip to the Okanagan Valley, Kent Hawkins once met a fellow whose deceased father’s devotion to the snack food was so strong, “there was a bowl of Hawkins cheezies on every table at his wake.”

Kent’s son, Travis Hawkins, once met an elderly woman who recalled going to the lake with her grandmother as a child, where they’d sit on the dock and dangle their feet in the water while sharing a bag of Cheezies. “She was talking about eating Cheezies 70 years ago,” he says. “It gets passed down from generation to generation.”

Recently, the company recently announced plans to build a second factory in Belleville, Ont. But rather than aid growth, the new facility is meant to assist the company in fulfilling the current demand that exists. Cheezies are only available in Canada, and Hawkins has no plans to expand into the US or elsewhere. While he declines to share a number, Kent Hawkins describes sales as “healthy.”

“My dad said, ‘What do you need in life? You need clothes on your back, a roof over your head, a couple holidays a year and you’re good.’ I’ve kind of gone along with that philosophy. I don’t need anything more in life,” says Hawkins. “The bigger you are, the more headaches you have trying to keep up with everything. My dad got the business down to one product, so it’s simple. It’s worked for us because people demand our product.”

The sense of loyalty can be seen not just in the relationship consumers have with Cheezies, but is also reflected in the way the company is run. Hawkins has remained a family business since its inception and when Travis takes the reins, he will be the fourth generation of Hawkins in charge. And that sense of family is not just at the management level. “We’ve had three or four generations working at our plant, too,” says Hawkins. “We’re very loyal to the people who work for us.”

Hawkins’ legacy is rife with contradictions: a quintessential Canadian snack that technically isn’t even Canadian, an inability to keep up with demand despite a refusal to advertise and a business model that seems wholly unconcerned with the capitalist imperative of exponential growth.

There’s nothing else in the world like a Hawkins Cheezie. So the next time you see an orange bag with red and white stripes, put it in your basket. If you’re willing to put in the effort, I can almost guarantee you’ll acquire a taste. One bite leads to a second, which leads to a handful and before you know it, you’ve finished the entire bag.