Are These Less-Than-$100 Dutch Ovens Any Match For Le Creuset?

Dutch ovens are a useful—and often pricey—tool in any home cook’s arsenal. We put three affordable options to the test. 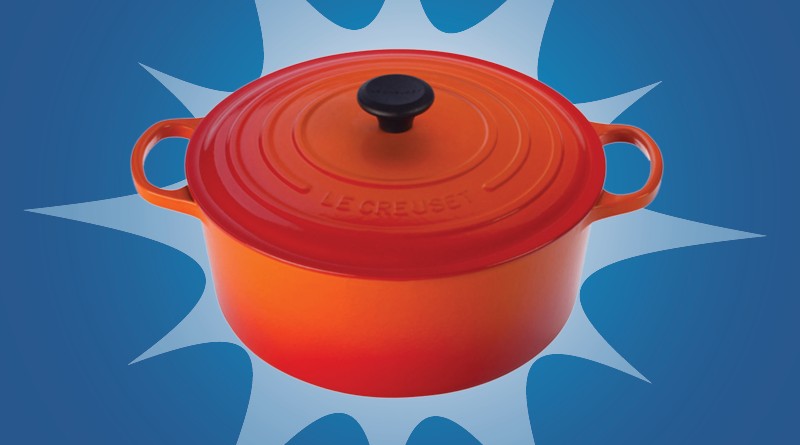 There is no kitchen implement I feel more passionately about than my cerise Le Creuset dutch oven. Bought with earnings from my first “real” full-time job—which took until I was 27, don’t judge—I came across it at a gourmet kitchen supply store while visiting my parent’s tiny town.

Even after extensive markdowns, the price was exorbitant. I left it behind, but dreamt about it for weeks after: wholesome fantasies about beef bourguignon, Bolognese and béchamel. I called the store to ask if it had been sold yet, and a credit card transaction later, the pot was blissfully mine.

Buying the oven felt like a symbolic transition into adulthood. I was ready to ascend to the next stage in my life; in order to bring my cooking abilities along, I figured owning a conspicuous slice of bourgeois domesticity couldn’t hurt.

Now I use it three times a week—five, since the pandemic started—for everything from pasta dishes to soups, and after three years, it still looks basically brand new. Its exterior a bright red and interior a light cream colour, save for a few scratch marks and brown stains easily removed with a bit of baking soda and elbow grease. As soon as I smell the intoxicating mix of onions mingling with garlic, I know I’m in for a good meal.

Admittedly, the pot does have its flaws. The flat bottom makes it more prone to retaining heat unevenly and developing hot spots, but due diligence helps avoid a catastrophe. Though it’s proven its worth many times over, I would never venture to describe Le Creuset as affordable; I still sometimes feel pangs of guilt when I think about how much I spent on mine.

So when Chatelaine asked me to test-drive three dutch ovens that clock in under $100 each, I was all-in. Would they compare favourably to my precious Creuset, or chip under the pressure?

To test the pots, I used Marcella Hazan’s classic roast chicken recipe, which features a technique that involves flipping the chicken halfway to create a self-basting bird. For the first 30 minutes, the bird is roasted upside down to crisp and brown the skin. Afterwards, the chicken is turned right side up — very carefully, so as not to tear the skin — so it can continue to roast in its own savoury, schmaltzy drippings for 50 minutes more. While I’ve never flipped a chicken in my Creuset, it does produce sensational crackling skin every time I roast one, which is pretty often. 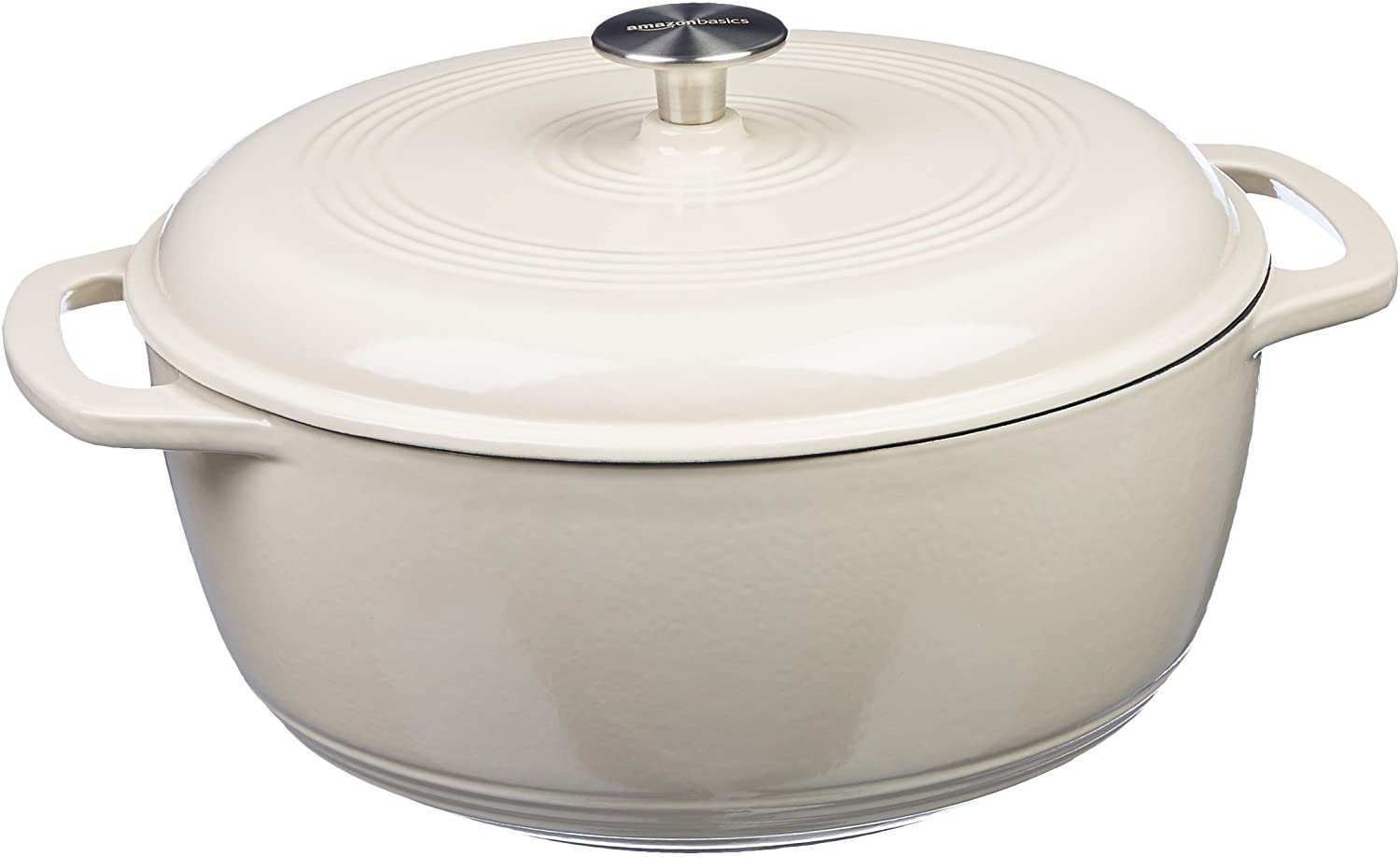 First up was the 4.3 quart dutch oven from Amazon Basics. At a little over $50, its fetching white exterior makes for a fairly good dupe of Le Creuset’s “oyster” collection. A strong scent of plastic emanated from the package upon opening, but otherwise, nothing seemed amiss. This dutch oven was appropriately heavy, had large, ergonomic handles and a deep, almost wok-shaped bowl. After 30 minutes of roasting, the chicken smelled amazing, but it sadly did not survive the stress of flipping with the skin intact. But the finished bird itself was a success; although its lack of skin caused the breast meat to dry out slightly, the browned bits of skin that collected on the bottom of the pan were so compelling that I scraped out as much as I could and devoured them whilst standing over the pan. (The bottom of the pan remained scrape-free.) 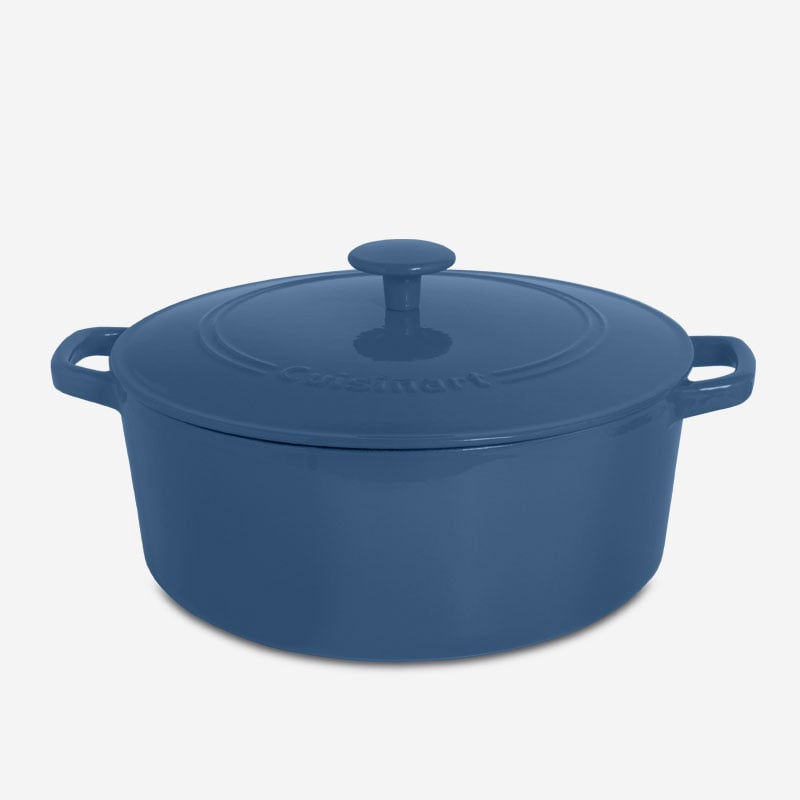 Next up was a stormy blue 7-quart Cuisinart ($79), which was so mammoth I could barely lift it. (This size of oven comes in handy if you’re consistently cooking for a crowd, but for two people or less is borderline intimidating.) Compared to the Amazon Basics, this oven had a much flatter bottom, similar to the Le Creuset, and much daintier handles.

This time, the amount of schmaltz in the pan had seemingly doubled (admittedly, it was a bigger chicken), but once again the chicken did not survive the pan flip. This time, instead of snacking on all that tempting browned chicken skin straight from the pot, I turned it into a simple gravy using flour and stock. It was delicious, but the whisk left dark scrape marks on the enamel of the pan, which did not wash out and gave me slight cause for concern that the enamel might chip more easily than the others—or at the very least, start to show its wear sooner than later. 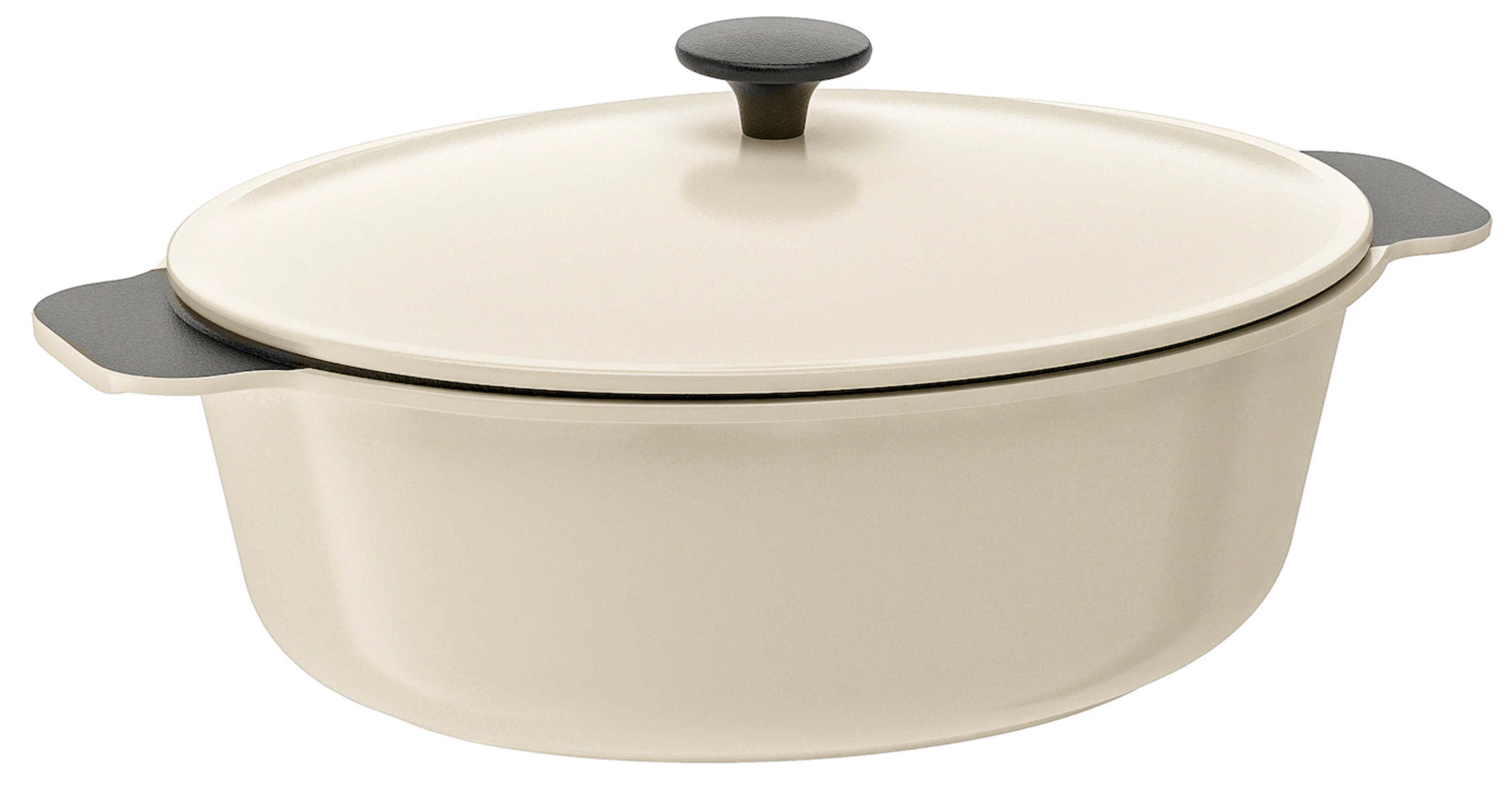 Last up was Ikea’s cream-coloured “Senior” 5.3 quart dutch oven ($49.99). A sleek ovoid shape, this dutch oven is unquestionably the most attractive of the bunch. Its shape makes it ideal for oven-based recipes, but slightly less optimal for stovetop cooking. Its solid handles were also a little trickier to lift out of the oven than the other two. At first glance, the inside of the pot looked like exposed cast iron, but is actually coated in a matte black enamel, making it better at conducting heat and more suitable for high-temp recipes than the previous two pots with white enamel interiors. I roasted the chicken in the same way I had with the other enamel cast-iron pans: face-down, without the help of any extra oil or butter.

I did not expect this pot to make the best chicken out of all three ovens, but when it came time to flip, the skin remained miraculously intact. When the bird was ready to emerge from the oven, the skin had roasted into an intensely crispy golden brown layer.

In the end, each dutch oven distributed heat evenly, cleaned up easily, and produced a stellar roast chicken. But I have to give top marks to the Ikea oven for both its attractiveness and facile surface. I award a second-place tie to the Amazon Basics and the Cuisinart: both had an identical user experience and produced nearly indiscernible roast chickens.

Were any extraordinary enough to lure my heart away from my Creuset? Well, no. That cerise red pot is an objet d’art, meant to be admired as much for its beauty as its ability to render a perfectly crispy bird every time. When I cook with it, I forget I’m in an awkward, shoe-box-sized kitchen in Toronto and am transported to a hearth in rural Provence.

But the simplicity and usefulness of all three affordable options demonstrated that it’s hardly necessary to pay upwards of $400 for a perfectly capable enamel dutch oven. If you are keen on getting into the world of dutch oven cooking, any of these three are worthy of a permanent home on your stovetop.