25 Foodie Hot Spots You Need to Try in Toronto

From fine dining to cheap eats, the city is filled with delicious eats hailing from all over the globe. There’s something for every food lover! 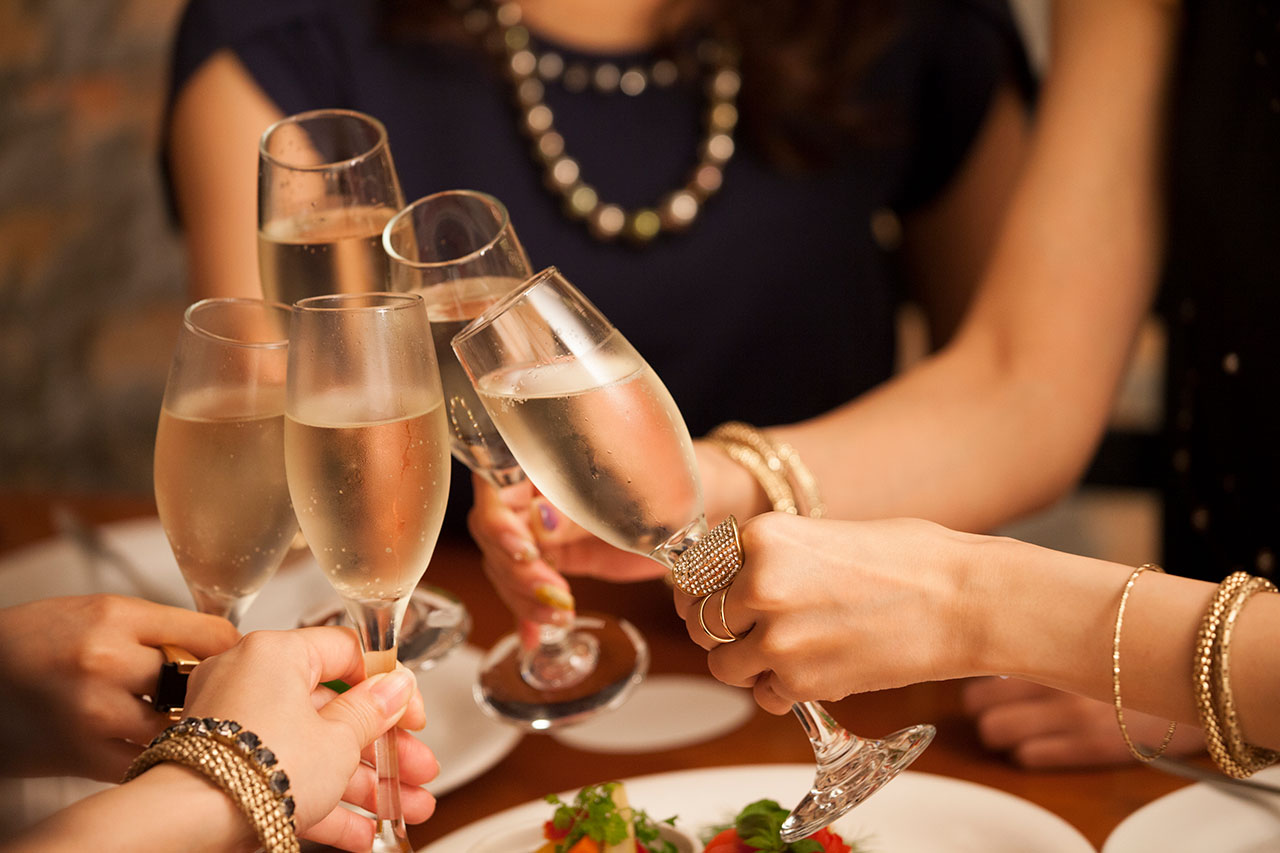 When it comes to good food, Toronto has it all, from mouth-watering khao soi and delicious jerk chicken to tasty tacos and coastal Italian dishes. The city is brimming with acclaimed restos at every corner with some of the top tourist destinations being foodie-approved spots like Kensington Market and St. Lawrence Market. Whether you’re looking to fulfill a particular craving or want to check something off your food bucket list, here are the places that are sure to satisfy your appetite. 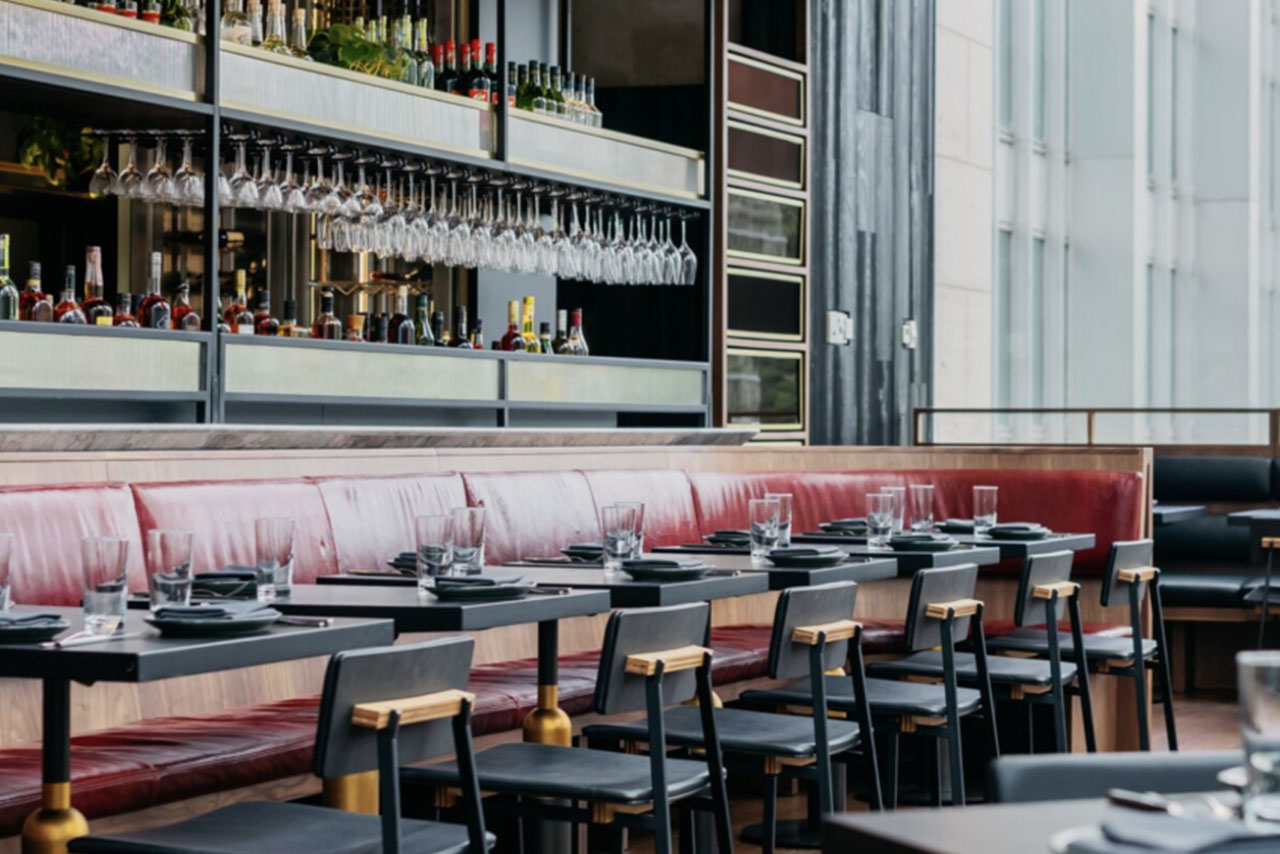 If an evening at the ballet is on your itinerary, be sure to make reservations at Momofuku, David Chang’s multi-level culinary venture located across from the Four Seasons Centre for the Performing Arts. Find the Noodle Bar on the ground floor, which serves noodles and steamed buns, while the third-floor restaurant Kōjin (which translates into Japanese as “god of the hearth”) specializes in food cooked over a woodfire grill, with a Colombian flair. On your way out, pop into the Milk Bar on the second floor and take home a box of Milk Bar Pie. momofuku.com/toronto

If you’re in the Theatre District to catch a show, you may want to have dinner or drinks beforehand. Here are a few suggestions:

This swish spot boasts the largest champagne list in the city and a selection of oysters that change daily. Enjoy a glass of bubbly or ask to take a champagne tour that will lead you to À Toi, a Parisian speakeasy-inspired restaurant tucked away in the back with an extended menu featuring French classics. sipshucksip.com

Nestled in the Entertainment District, this elegant restaurant specializes in Eastern Mediterranean cuisine served family style. With dishes like the waguh lameh and tah-dig, you’d be hard-pressed not to order everything off the menu. Just remember to leave room for dessert: the stuffed baklava with mint ice cream and orange blossom mousse are just a few of the delicious options. byblosdowntown.com

Specializing in Northern Thai cuisine, this laid-back dining spot has topped several “best of Toronto” lists over the years and remains a local favourite. Classics like the belly-warming khao soi (egg noodles in coconut broth) and tangy tom yum kung (spicy and sour shrimp soup) are perfect for chilly days. You also have the option of choosing from five spice levels for some of the dishes if you want to crank up the heat. paitoronto.com

The downtown location is perfect for a post-theatre treat. Ice cream enthusiasts flock to this dessert spot for its unique over-the-top flavours. Order the Birthday Cake—vanilla soft serve stacked with cream cheese icing, birthday cake bits and rainbow sprinkles—or go for the more adventurous Krusty the Cone, which coats vanilla soft serve with a rainbow explosion of cotton candy and sprinkles. sweetjesusicecream.com

On the lookout for good food with a side of sweeping views of the city? Here’s where to head to get the best of both: 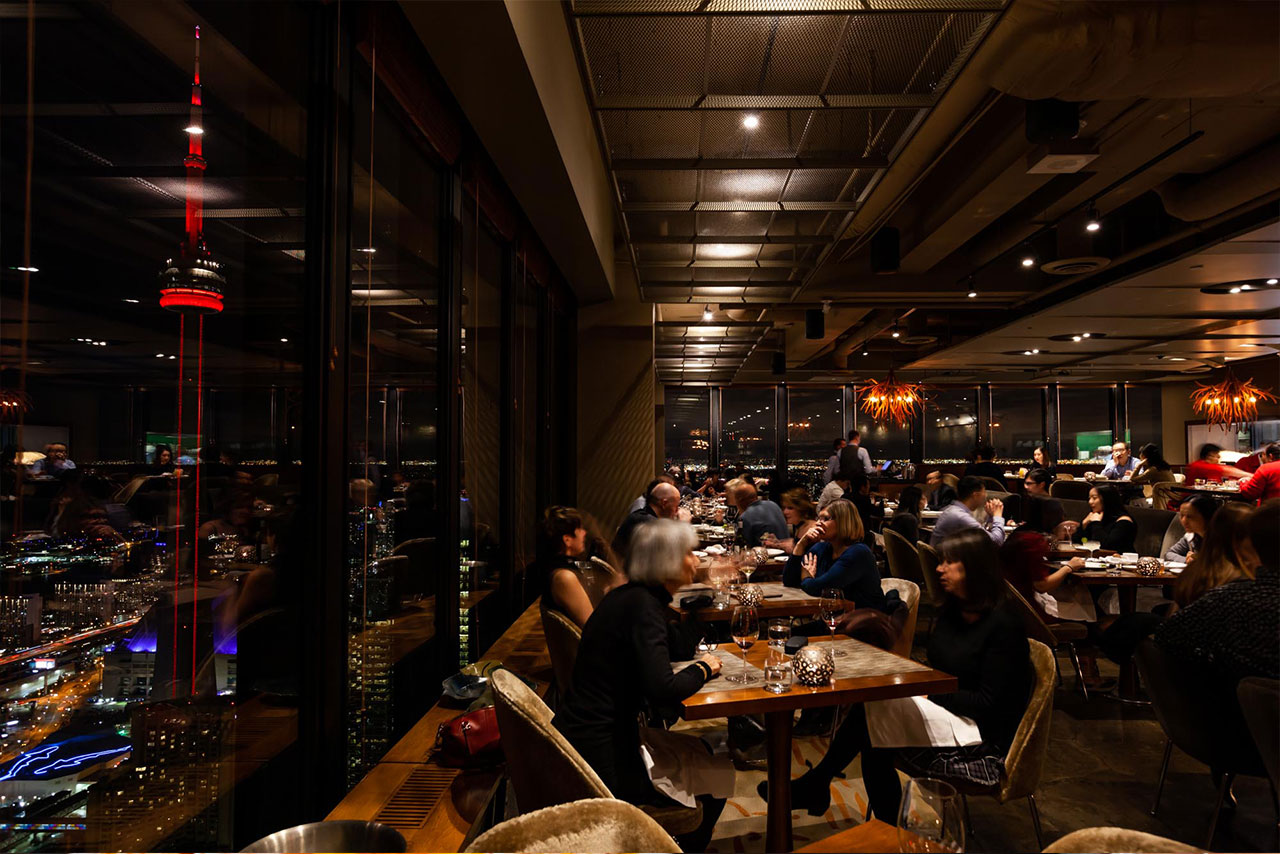 Perched on top of the 54th floor of the TD Bank Tower, Canoe lets you dine while enjoying panoramic views of the city and Lake Ontario. The menu highlights contemporary Canadian cuisine, utilizing fresh, local ingredients from across the country. Choose from the seasonal or à la carte menu, and be sure to order one of the uniquely Canadian handcrafted cocktails. canoerestaurant.com

For brunch with a view, head to the 44th floor of the Bisha Hotel where you’ll find Kōst, the hotel’s rooftop restaurant. Located steps away from the TIFF Bell Lightbox in the Entertainment District, it’s the perfect reprieve from bustling city life with its clear view of the CN Tower, rooftop pool and delicious Baja Californian–inspired menu. kosttoronto.com

For more memorable Toronto eats, these are the spots food obsessives should bookmark.

This historic landmark also happens to be one of the city’s top food destinations, beloved by locals and tourists alike. Whether you plan on picking up fresh produce, loading up on cheese or eating your way through the market, you can easily spend an entire afternoon roaming the myriad of stalls. Essential eats include the fish-and-chips plate at Buster’s Sea Cove and the veal parmigiana with eggplant sandwich at Uno Mustachio. stlawrencemarket.com 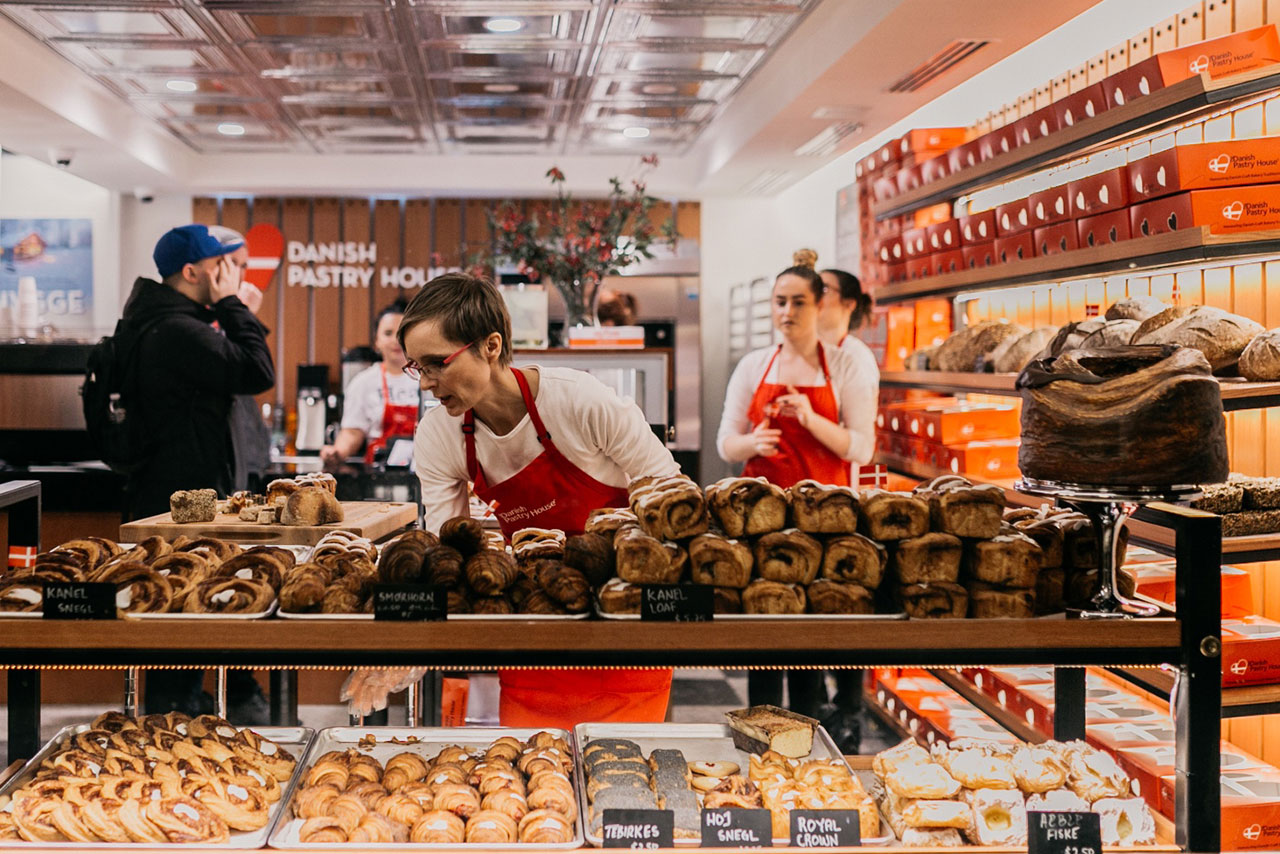 If you’re in Toronto, you’ll likely pass by Union Station either on the TTC or above ground. Aside from being a busy transport hub, Union Station’s recent makeover has given way to a new crop of trendy eateries like Roywoods and Bangkok Buri, located downstairs in the Union Station Food Court. Your nose might also lead you to Danish Pastry House, where your most difficult decision will be choosing between the cream buns and poppyseed rolls, or Uncle Tetsu’s Cheesecake for one of its famous fluffy cheesecakes. torontounion.ca

There are hot dogs and then there are gourmet sausages from Wrvst, a beer hall that specializes in artisan sausages, beer and cider. This King West spot—and its newer location in Union Station—has a wide selection of sausages for the adventurous (and those who like to play it safe, too!) with offerings like rabbit, elk and chorizo. They even let you choose between a bun or a currywurst. Don’t miss out on the duck fat fries—they will not disappoint. wvrst.com

Kensington Market is a prime spot for delicious and affordable food, whether you’re craving a golden, flaky Jamaican patty or looking for delectable vegetarian dishes. Feast on delightful Jamaican-Italian fare at Rasta Pasta, pick up empanadas at Jumbo Empanadas or load up on freshly baked loaves of bread at Blackbird Bakery Co. kensington-market.ca

This fine-dining destination is the first in North America from Michelin Star Chefs Alfonso and Ernesto Iaccarino, who bring a taste of the Amalfi Coast to Toronto. Unabashedly upscale but never stuffy, the impeccable service and choice between à la carte or two tasting menus make it a memorable dining experience from start to finish. Not convinced yet? It was recently named the best Italian restaurant in the world! donalfonsotoronto.com 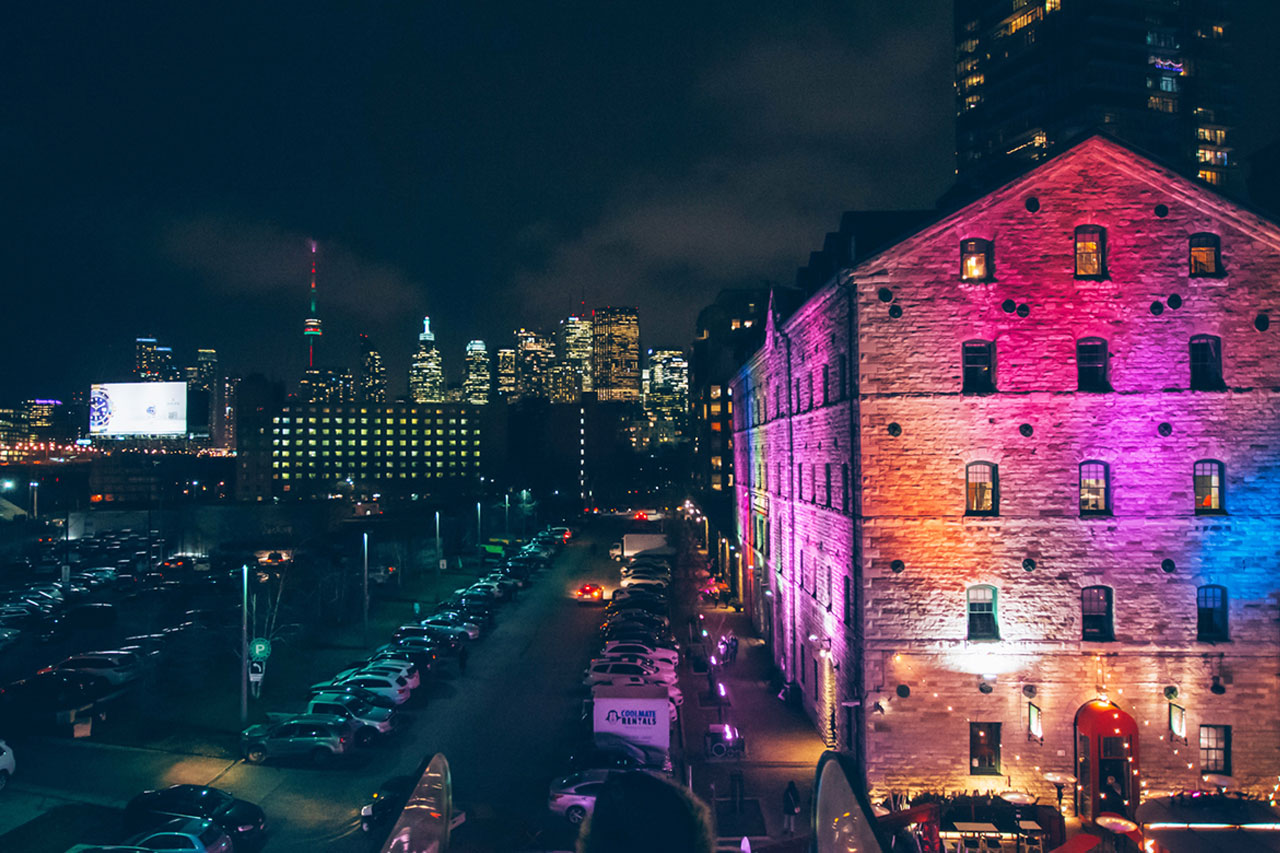 Once home to the largest distilleries in Canada, today this charming, pedestrian-only historic site is dotted with art galleries, design shops and clothing boutiques. In between exploring and shopping, hit up one of the many restaurants on-site guaranteed to suit any appetite. Options include Madrina Bar y Tapas, Boku Noodle Bar, Balzac’s Coffee Roasters and Soma Chocolatemaker. thedistillerydistrict.com

Located in the Financial District, this food emporium brings together some of Toronto’s best chefs all under one roof. Little DaiLo, helmed by DaiLo chef Nick Liu serves up Asian dishes with a French flair (the truffle rice and crisp Peking duck wings are a must), while Ramen Isshin lets you slurp on flavourful ramen. Other options, such as Bulldog Coffee, Reyna and Mira Mira, will slow down your decision-making, but the beauty of the food hall is that you can sample from multiple vendors. assemblychefshall.com

After a day of shopping at Toronto Eaton Centre, make Saks Fifth Avenue your last stop and remember to head down to Saks Food Hall. The 24,000 square foot space has it all—gourmet groceries, a champagne bar and several dining options you can enjoy there or take to go. Before heading out, pick up a box (or two) of chocolates by CXBO, an award-winning confectionary best known for their colourful Disco Eggs. pusateris.com

Can’t get resos at Alo, which holds the distinction of being the best restaurant in Canada? Make your way to Aloette, the new—and more affordable—sister spot two floors below, which only accepts walk-ins. The French bistro delivers on diner classics, like burgers, fried chicken and meringue pie, as well as seafood delicacies, like scallop crudo and hamachi sashimi. aloetterestaurant.com 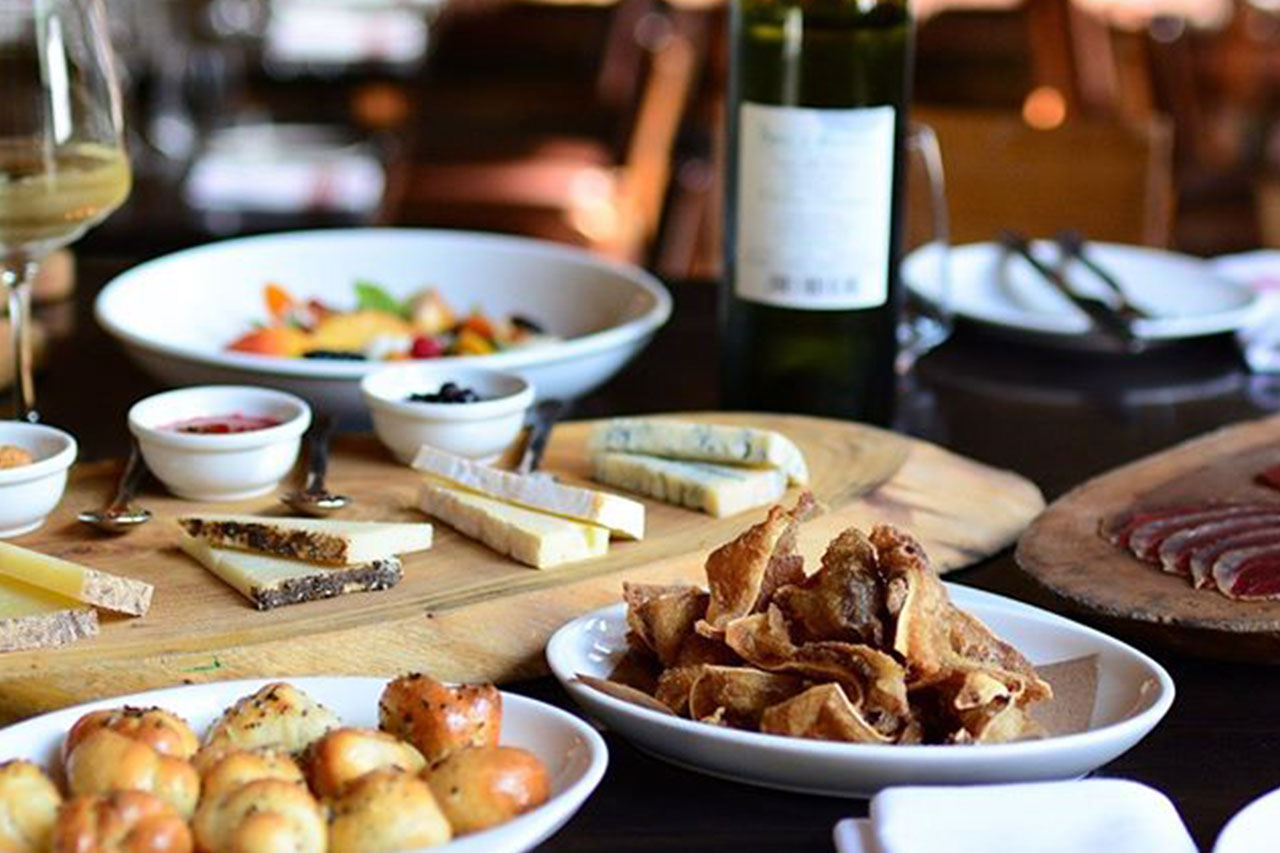 If you’re spending the day in Yorkville, take a break at Buca Osteria & Bar. This coastal version of Buca (the original Italian restaurant is located on King Street) leans into fresh seafood, giving it an Italian twist with offerings like the house-made salumi di mare. buca.ca

The other famous Drake in the city, this boutique hotel is a cultural hub with art, live music, community events and food. You can also dine at one of the other outposts, like Drake One Fifty or Drake Commissary. If you’re planning on heading there for brunch, the much-talked-about blueberry scones are a must—and they most definitely live up to the hype. thedrake.ca 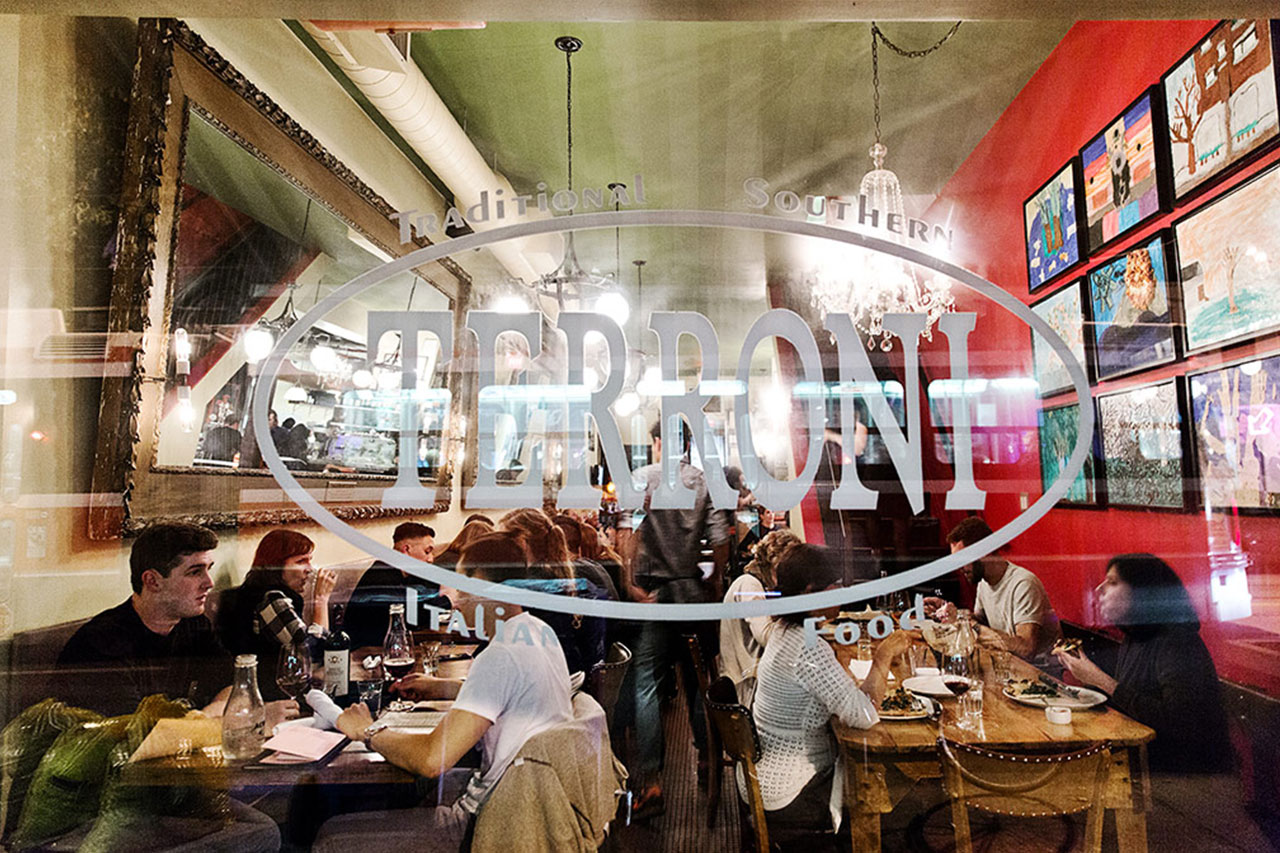 With a flagship on Queen West and multiple locations, Terroni is considered essential Italian dining in the city (we hear a certain Duchess is a fan of the restaurant’s peperoncini piccanti). Get your pasta or pizza fix at one of the several Terroni locations or head to Sud Furno, where you can break for a meal or have your fill of the bakery’s signature sugar-dusted bombolone. terroni.com

Helmed by celebrity chef Susur Lee, the eponymous restaurant is home to the famous Singaporean-Style Signature Slaw, a towering, mouth-watering combination of 19 ingredients, like vermicelli and fried taro root tossed in a salted plum dressing. But it’s not the only showstopper: the Cheeseburger Spring Roll and Luckee Shrimp Cheung Fun are other favourites. leerestaurant.com

For modern Chinese food in Chinatown, make reservations at R&D, owned by MasterChef Canada winner Eric Chong and Michelin–starred restaurant owner Alvin Leung. Order classics, like dim sum, small plates, like the kimbap tostadas or what the restaurant bills as the “Best Duck in the City.” If you plan on ordering the latter, however, give the restaurant a head’s up by calling at least 24 hours prior to your reservation. rdspadina.com 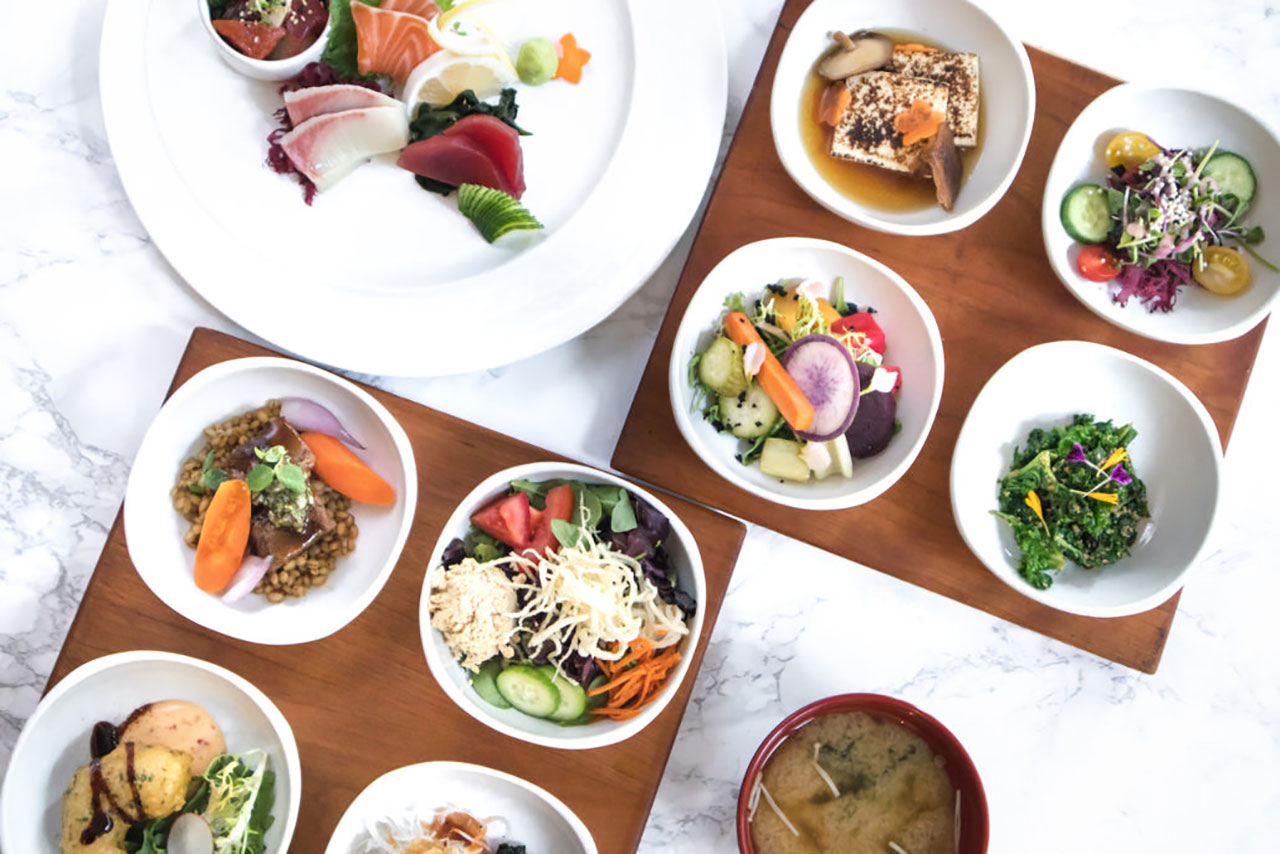 Catching a Raptors game at the Scotiabank Arena? Head over to Miku, the first East Coast location for the Vancouver–based Japanese restaurant, which specializes in aburi-style (flame-seared) sushi. The Harbourfront location isn’t easy to find, but worth the effort. The stylish upscale spot also offers Kaiseki menus (a traditional Japanese multi-course style of dining) and is sure to please even the most discerning sushi lover. mikutoronto.com

Bar Raval
For tasty tapas and top-notch drinks, head over to Bar Raval on College Street. The Barcelona–inspired tapas bar offers a slice of Spain in Toronto with its Gaudí-esque, mahogany interiors. And if you’re out late, take advantage of the $5 glass of Cava, available from midnight to 2 a.m. thisisbarraval.com

BarChef takes drinking seriously. The inventive cocktails are an art form at this Queen Street West establishment, and all the bitters, infusions and syrups are made in-house. It’s hard to resist drinks with names like Van Gogh’s Downfall and Antique Library. barchef.com

Plant-based eateries are sweeping the city. With two locations, one in Yorkville and one in Queen West, Planta’s playful take on plant-based eating includes dishes like avocado lime tartare, which swaps tuna for beetroot, and the irresistible cauliflower tots with truffle almond parmesan and lemon aioli (warning: you may need to order multiple plates). plantarestaurants.com