Sink your teeth into treats showcasing glutinous rice, coconut and lots of condensed milk. With delicious recipes and restaurant recommendations! 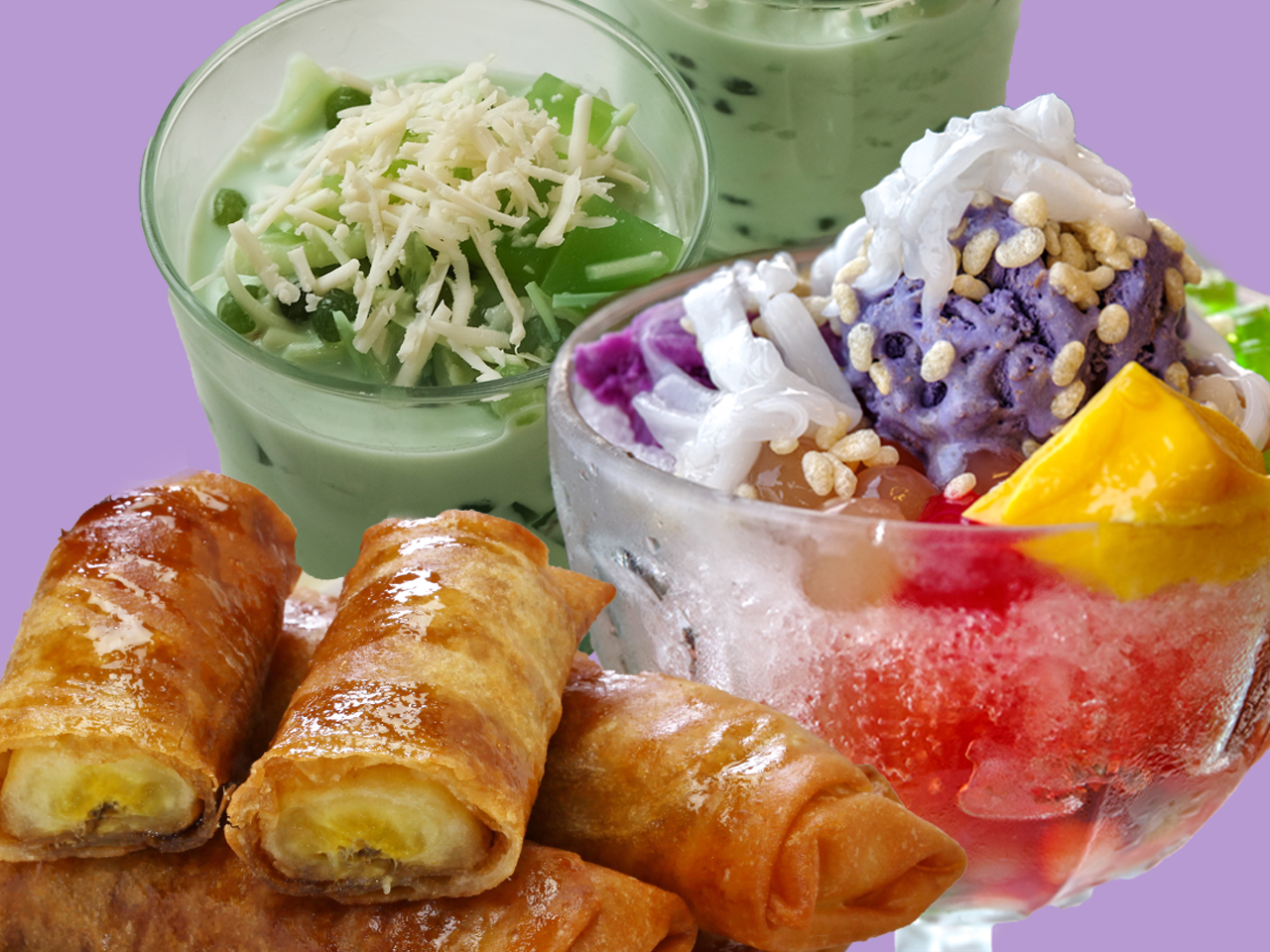 Some of my most vivid memories from when I was a kid include drooling at the mountains of food served at Filipino famjams. Not only did it mean I could hang out with my cousins, but it also meant that I got to eat my titas’ and titos’ (aunt and uncle in Tagalog) cooking. Summer time get-togethers were especially delicious, and although I’d stuff myself with inihaw (grilled meats and seafood), I always had more room for dessert.

Filipino desserts are heavily influenced by Malay, Chinese, and, as a result of colonization, Spanish flavours, which means the basis of many of our sweets are glutinous rice, coconut and condensed milk—lots and lots of condensed milk. Now that I’m living on my own, far away from my family, those get-togethers are few and far between. Instead, I rely on local restaurants and recipes to feed me when I miss home. Here are some Filipino desserts perfect for sweet summer nights with recipes and restaurant recommendations. 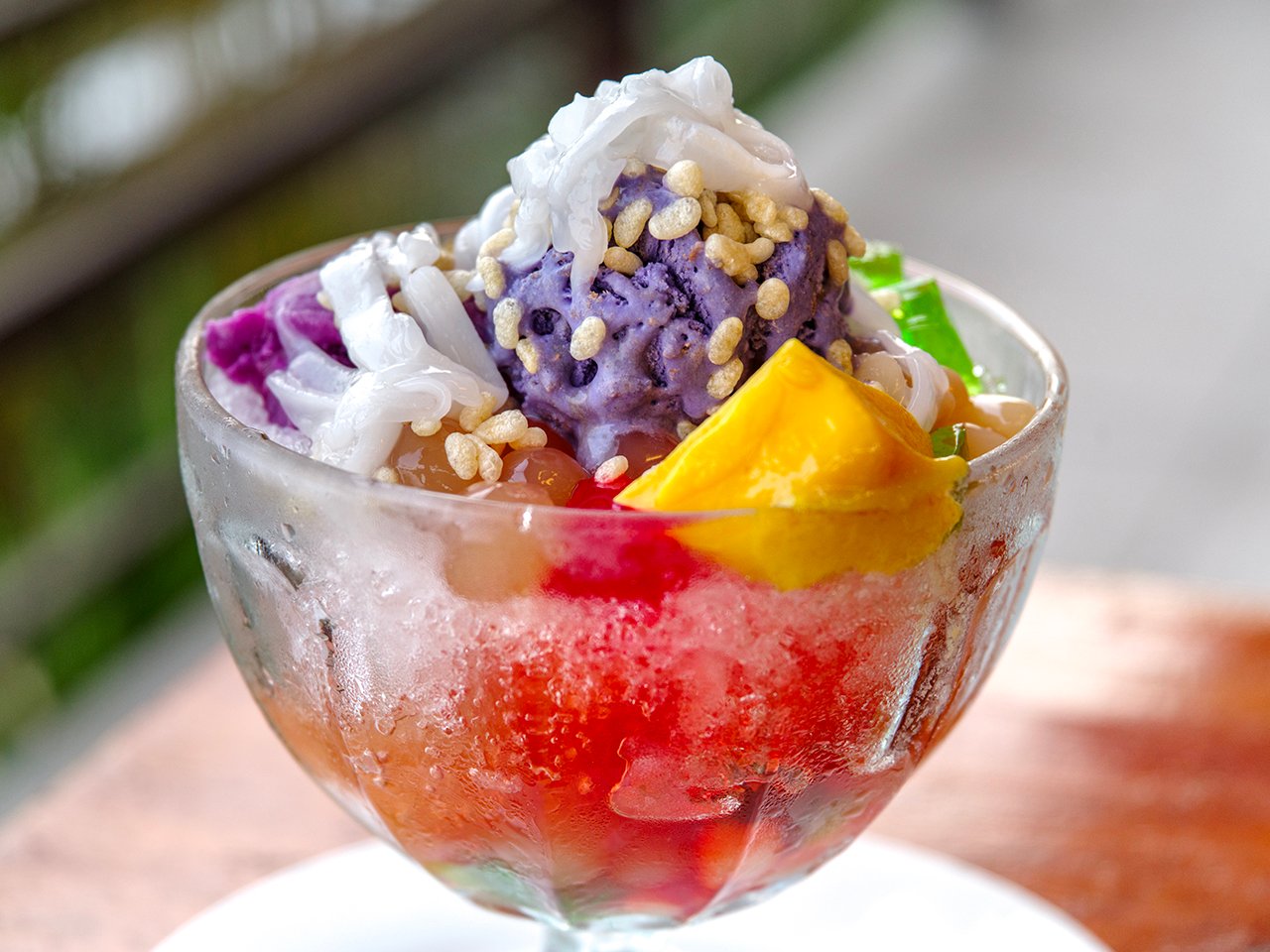 It’s a classic go-to summer dessert that’s sure to fill you up and cool you down. Back in Vancouver, my parents and I would visit my uncle and aunt in the summers. I always knew there’d be a set up of halo-halo mix-ins awaiting my arrival: Bowls of sweet corn and red bean, ripe jackfruit, ube halaya, mango or ube ice cream and macapuno (gelatinous shredded coconut) to name a few. I’d start with a base of sweet red bean and pile on as many ingredients as I could, topping it off with shaved ice and mango ice cream. Then I’d pour in evaporated milk and halo-halo (mix mix) all of the ingredients together—you know you’re doing it right when your spoon barely has room to stir without the cup overflowing.

Try our halo-halo recipe or order from Ba-on Filipino takeout in Toronto. 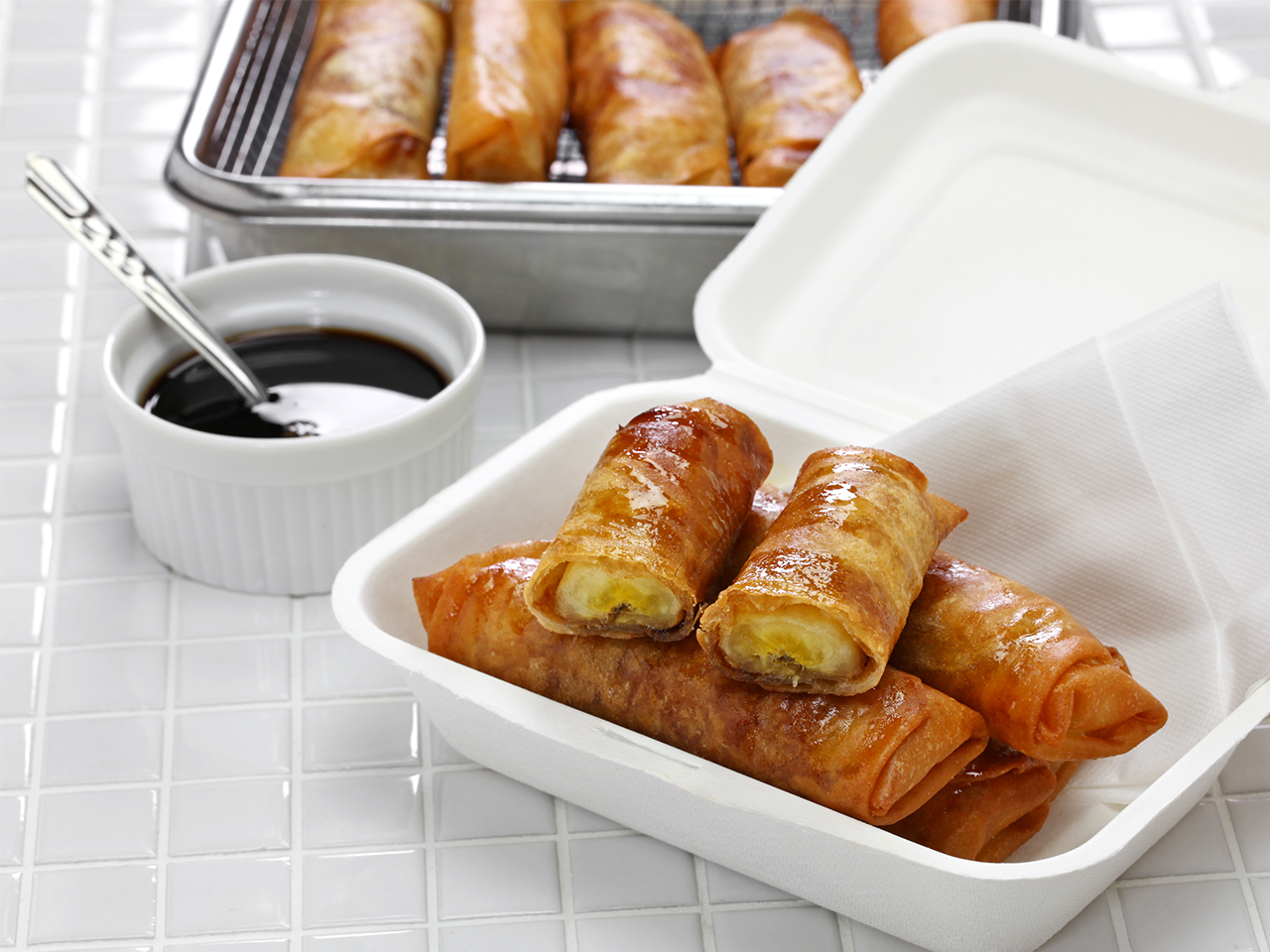 This dessert is the perfect marriage between Chinese cooking techniques and native Filipino ingredients like the saba banana (sweet plantain). Brown-sugar-coated saba bananas and jackfruit are swaddled in lumpia (spring roll) wrapping, fried and then coated in even more caramelized sugar. I’ve never gone to a family get-together without eating a small child’s weight in turon. Its bite-sized simplicity is what makes it so addicting.

You can buy turon at your nearest Seafood City, or order from Kulinarya in Coquitlam, B.C. 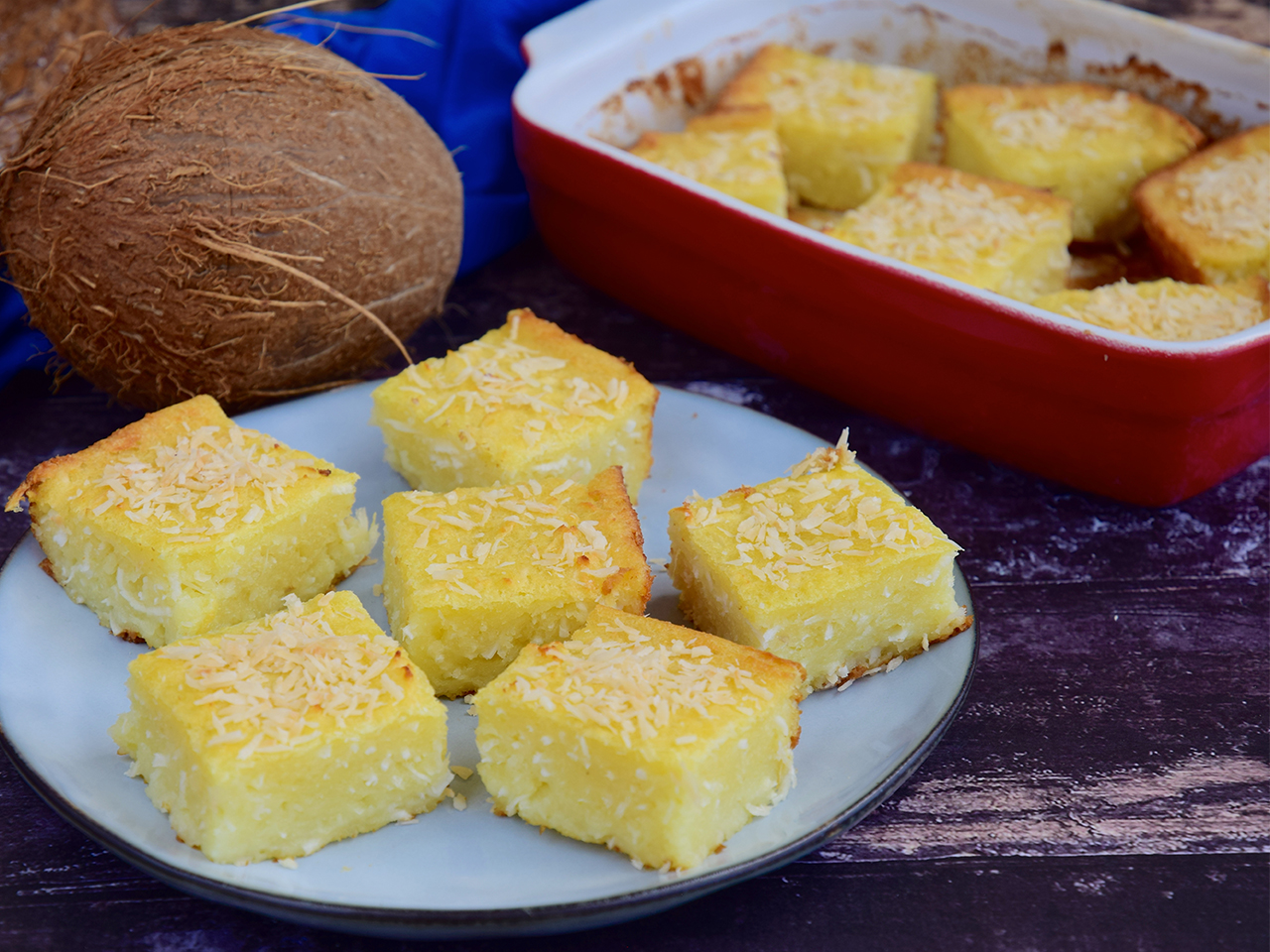 Cassava (kamoteng kahoy in Tagalog) is a crop that made its way to the Philippines from South America via the Manila galleon, a Spanish sailing vessel that made an annual trip from Manila to Acapulco (in present-day Mexico) from the 16th to 19th century. While this ingredient is a product of colonization, Filipinos took advantage of the crop to make cassava cake, which is a moist cake made from the grated root vegetable (aka yuca), coconut milk and condensed milk baked in banana leaves. In my family, cassava cake is usually prepared for special occasions and given as a “pasalubong” or gift—because who wouldn’t want to be gifted a delectable cake!

Try this cassava cake recipe or order from Cuisine de Manille in Montreal. 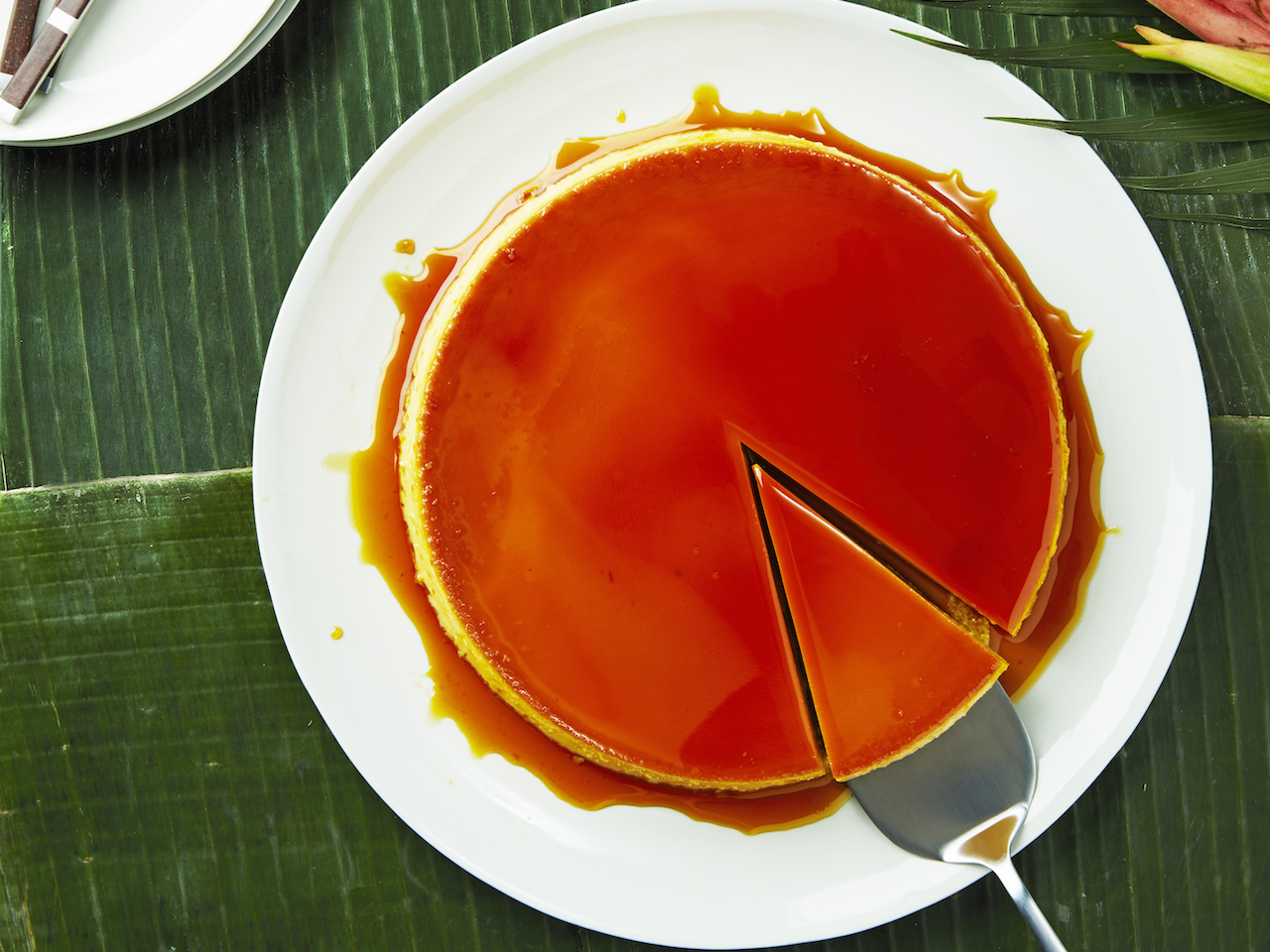 Believed to have originated on the borders of Spain and France, this dessert was brought to the Philippines during Spanish colonization. Whenever the sweet smell of custard caramelizing in the oven filled our house, I knew my dad was about to bless us with his homemade leche flan. Served chilled, your spoon will slide right through its perfectly smooth exterior and it’ll melt deliciously in your mouth.

Try our leche flan recipe or order from Flantastic in Toronto. 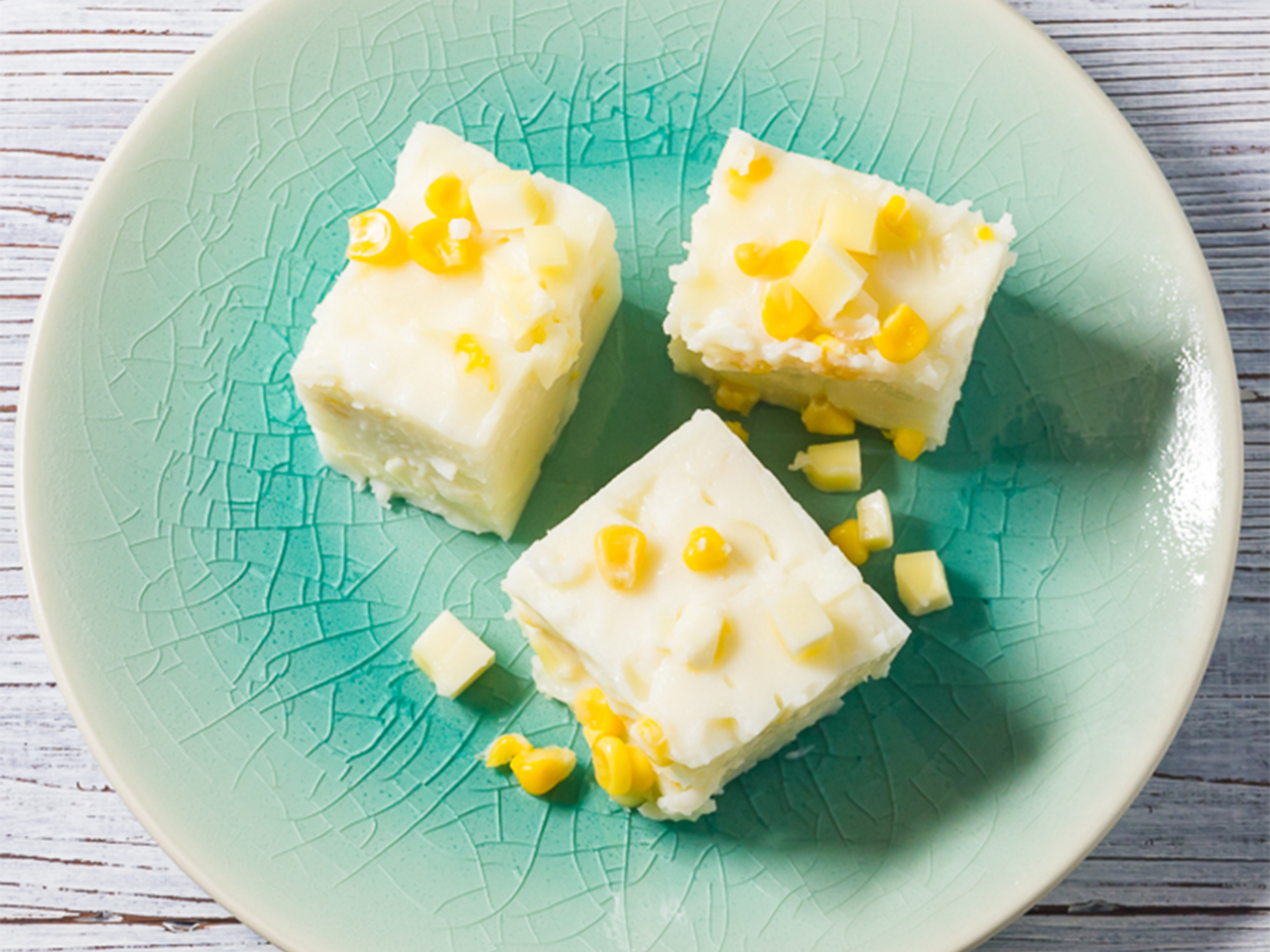 Whenever I eat maja blanca, I’m sitting with my legs dangling off the chair at my lola’s (grandma) house again. Made with coconut milk, corn kernels and latik (browned coconut cream) or coconut flakes, maja blanca is comfort in the form of dessert. The corn kernels are pops of texture in the smooth and creamy coconut pudding, while the latik or coconut flakes add some depth with their toasted flavour.

Try this maja blanca recipe or order from Pampanga Cuisine in Vancouver.\ 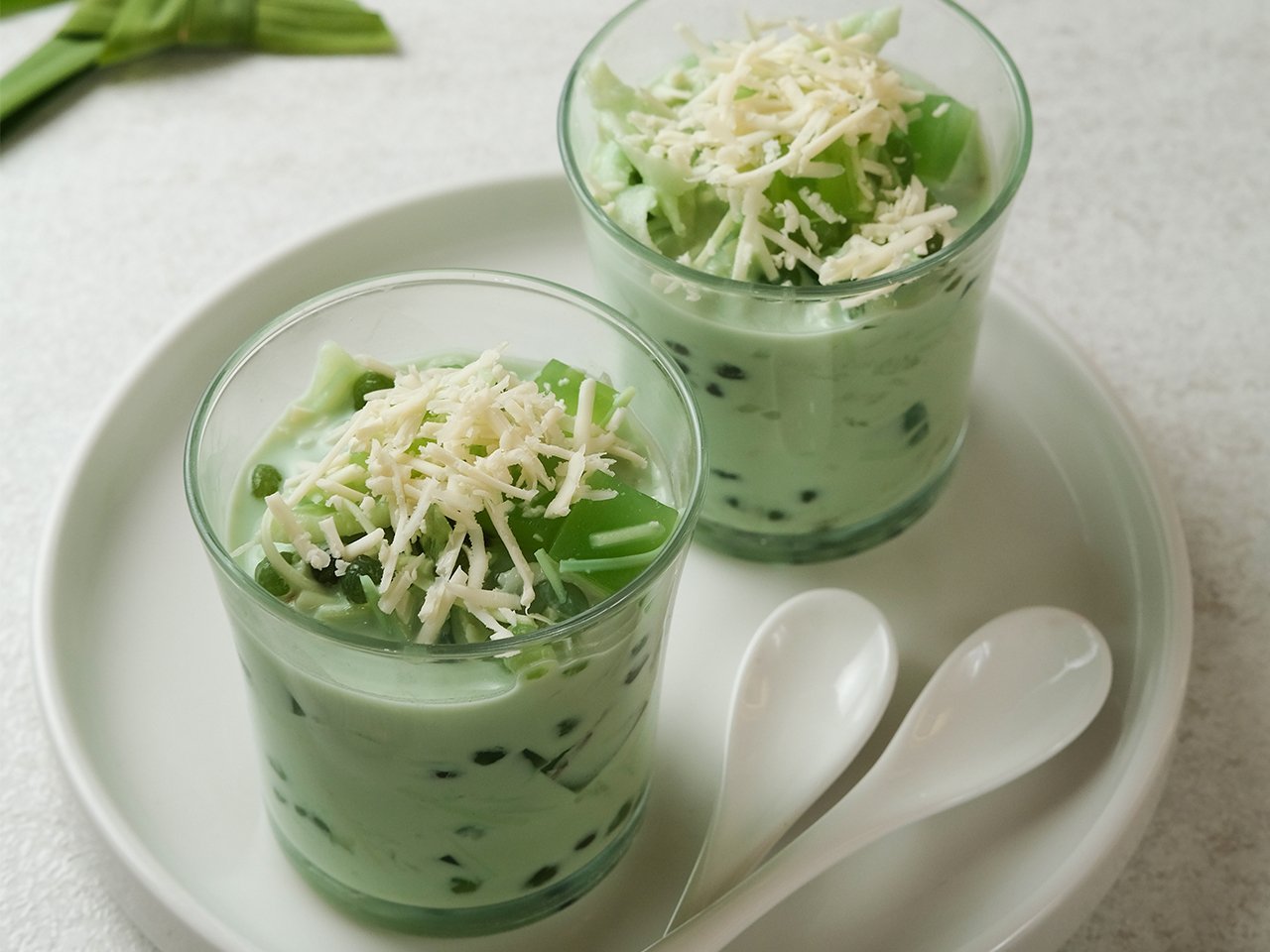 Originating from the island of Bohol in the Central Visayas region of the Philippines, this is a salad that won’t take much convincing to eat. It’s made from strips of buko (young coconut), pandan extract, gulaman (plant-derived gelatin), evaporated and condensed milk. Outdoor barbeques aren’t complete without this refreshing dessert to cool down your palette.

Try this buko pandan recipe or order from a Max’s Restaurant near you. 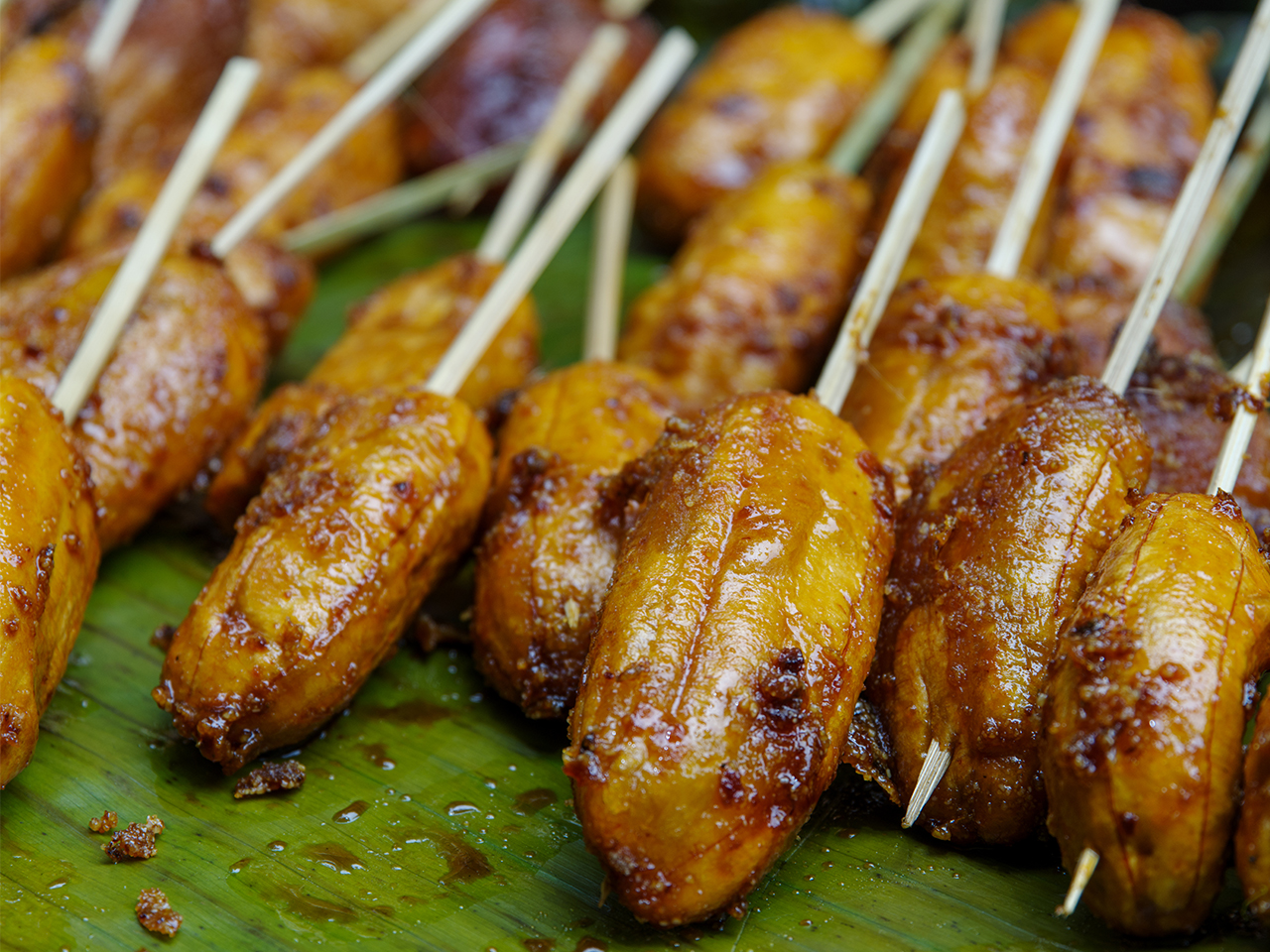 I moved from Manila to Vancouver when I was just four years old, but one vivid memory I have is walking through the palengke (outdoor market) with my lolo (grandpa) and following the aroma of brown sugar to a stack of banana cue. It’s a popular street food in the Philippines made of saba bananas covered in brown sugar and then deep fried and skewered on bamboo sticks like skewers of barbequed meat (hence the play on barbeque for its name). 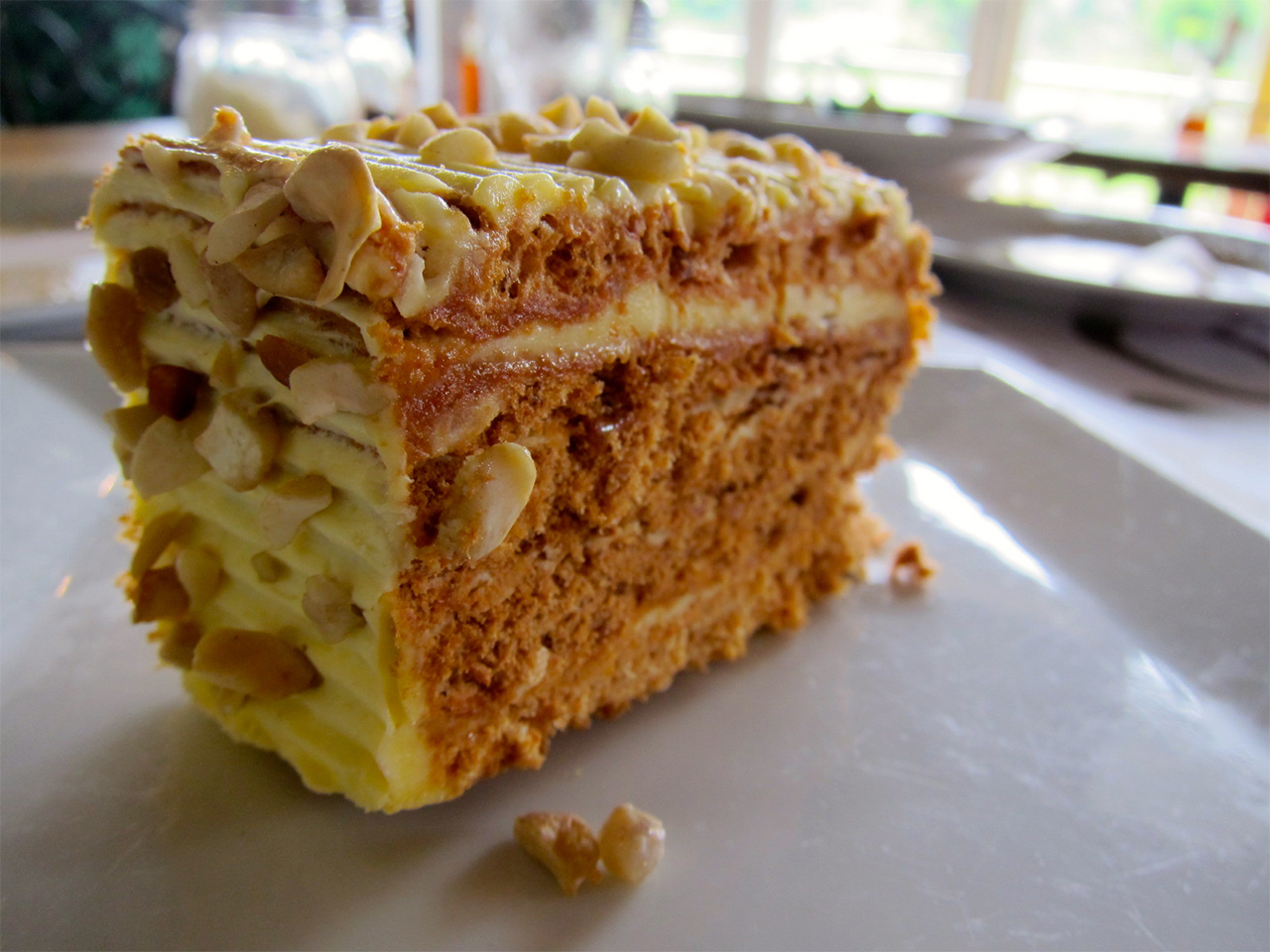 Sans rival is said to have originated in France and brought over by Filipinos who studied there during the 1920’s and 30’s. The cake is made using the dacquoise technique: a meringue infused with baked nuts, sandwiching rich French buttercream. The meringue is traditionally infused with almond or hazelnut, but due to availability, cashews are used in the Philippines. This sugary dessert is my dad’s personal favourite.

Try this sans rival recipe or order from Filistix in Edmonton. 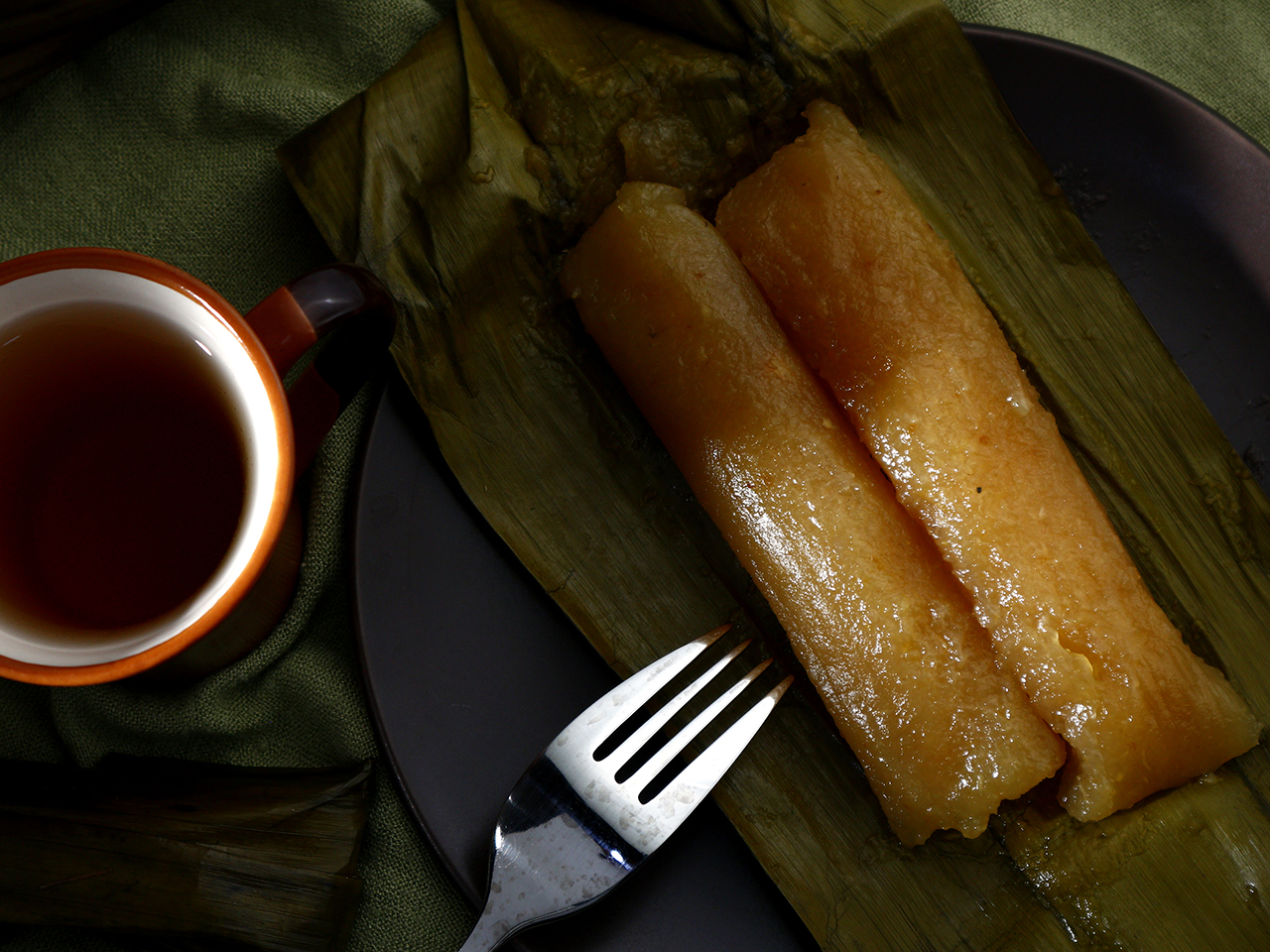 This dessert is quite literally a present. It’s made from glutinous rice cooked in coconut milk and wrapped in banana or coconut leaves. The rice cake is served tightly packaged, making for an exciting reveal of the soft, tender rice, which is usually sprinkled with sugar or latik before being eaten. My family and I would also eat this for merienda (snack time), but a lot of Filipino sweets are interchangeable as desserts and snacks. There are many variations of suman from different towns in the Philippines—something as small as adding or changing one ingredient, or altering the wrapping style could give you a different type of suman.

Try this suman recipe or order from Remelys in Toronto.

This dessert is a coconut milk soup filled with rice balls, jackfruit, saba bananas and tapioca. It can be served hot or cold for a refreshing summer treat. One of my favourite activities to do with my lola is to roll the small glutinous rice balls for the bilo-bilo. It’s a dish I always request when I visit my family.

Try this ginataan bilo-bilo recipe or order from Lola’s Filipino Kitchen in Calgary.\ 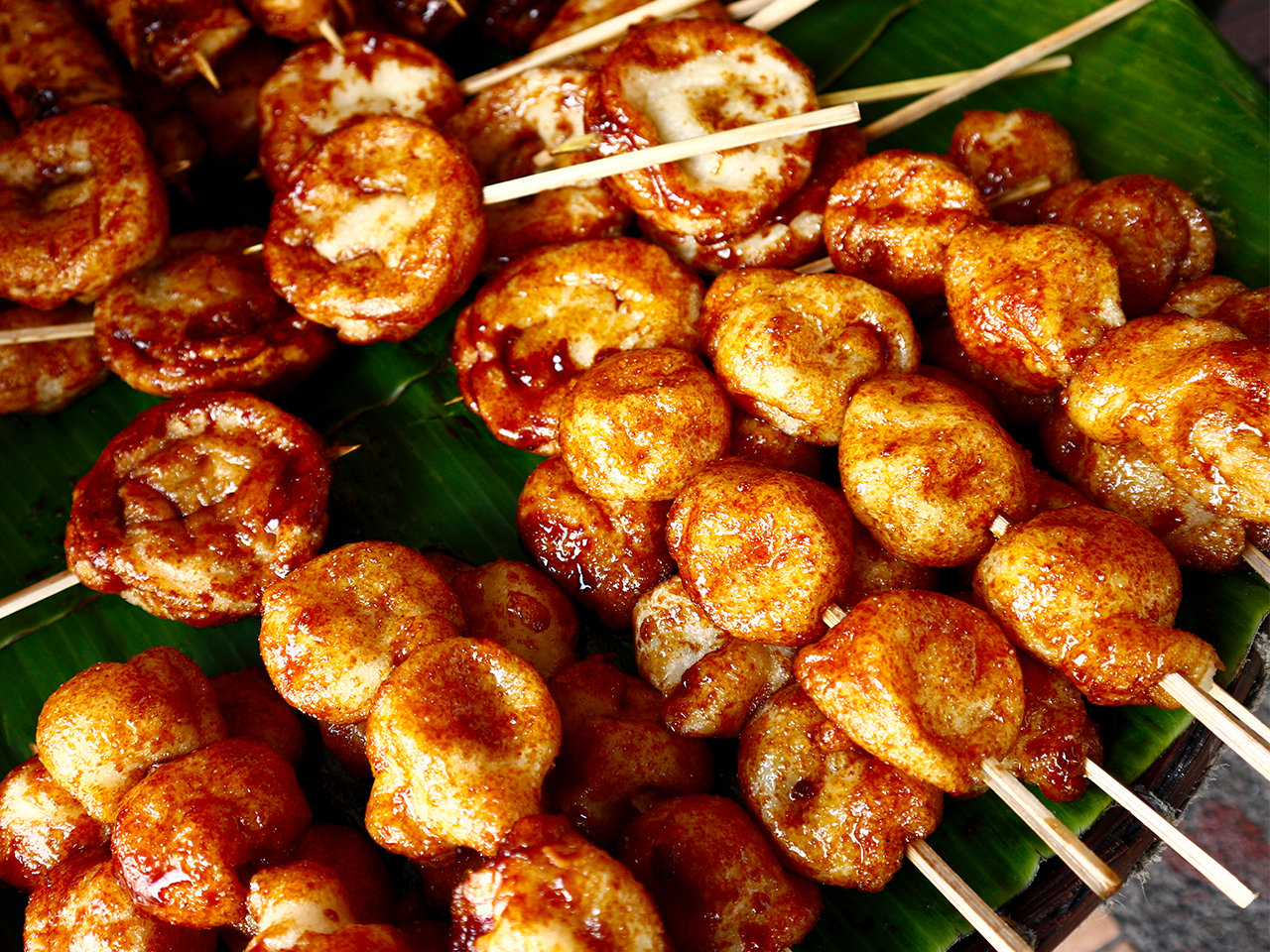 This is the Philippines’ answer to the timbit. Carioca is a doughnut made of deep-fried rounded glutinous rice, grated coconut and sugar. It’s usually ball-shaped and stacked on skewers, but you can also find elongated and pancake-shaped versions of this sweet treat. Just like banana cue, this dessert is sold by street vendors all over the Philippines. Here in Canada, I’ve had the pleasure of enjoying it at local Filipino festivals.