After being signed at the age of 69 as a face for CoverGirl cosmetics, Musk took the industry by storm. 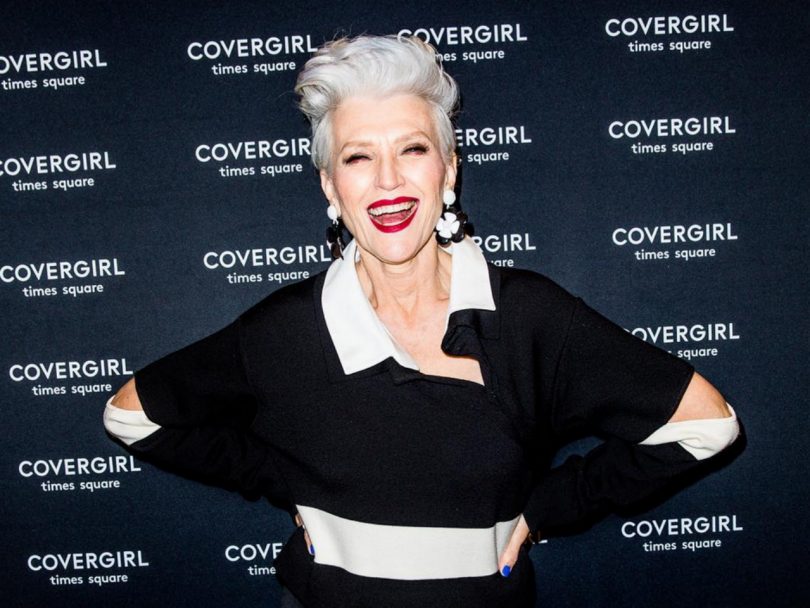 Maye Musk is living her best life. The 70-year-old model and mother of three (her son Elon is the founder of Tesla) has been striking a pose as an international model since the age of 15 and is also a renowned dietician who’s given countless lectures on the importance of healthy eating. After being signed at the age of 69 as a face for CoverGirl cosmetics and their Simply Ageless line, Musk took the industry by storm. We sat down with the Canadian-born beauty to chat everything from embracing her natural grey hair to why Canada holds such a special place in her heart.

On how it feels to have been named a CoverGirl when she was 69 years old:

“It’s the highlight of my career. Since I was 15 I’ve been lining up for auditions and trying to get jobs and getting some bookings but you never think that you’ll be the face of a huge brand. You don’t even aim for it since as you get older you do older photo shoots.  I did a shoot where I was the mother of the bride when I was 28 and at 42 I did my first grandmother cover in Toronto, I was only 42  but nobody else was that old in the business.”

On how her experiences have added perspective to her life:

“Definitely wisdom has increased. [Overtime] you learn from things that happen in your life. You go through some very horrible and tragic times and you recover from it and you realize that the next time something horrible happens, you can recover a little quicker. If it’s a bad business or personal relationship and it’s not working out and it’s not going to get better, you need to take the risk and move on. You have to look forward to every day and be happy every day and that’s more important than the security.” 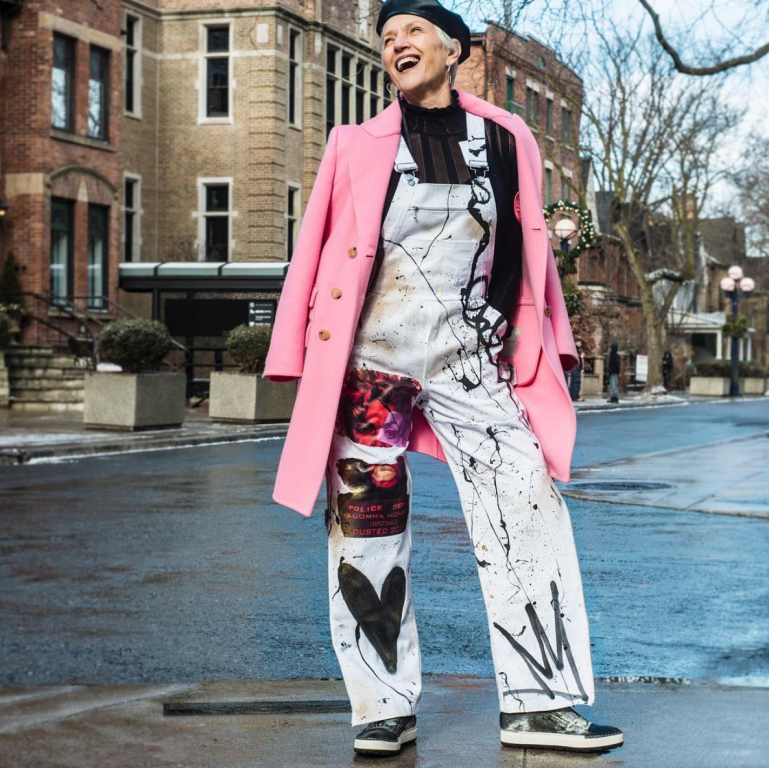 On how her idea of beauty has evolved as she’s aged:

“The main thing that impacts my life is my eating habits. When I eat poorly, I lose my confidence and my skin doesn’t look so good. It gives me confidence when I eat well. You are beaten down a lot in life and also in modelling, you would get every one out of ten jobs that you’re up for and then you just have to accept that you get rejected a lot. But life does get better with age.

On what it means to her to be back in Canada promoting CoverGirl:

“Canada has been very good to me. First of all I was born in Regina and then my parents moved to South Africa when I was two and I grew up with these wonderful Canadian parents. My whole family was very nerdy and then when I was 41 my kids said, ‘we should go back to Canada,’ so I then got citizenship for my three kids and we moved to Toronto when I was 42 and I was immediately taken on at the University of Toronto as a research officer, I did another master of science degree and I also did some modelling and did talks I taught at a modelling school in the evenings as well as I taught nutrition education at a college. Your funds are blocked when you move from South Africa so I found a rent-controlled apartment that took us about three weeks to get it so it was livable. I wanted to get a plush carpet that was $200, but my daughter said, ‘we are going to be sleeping on that carpet so let’s spend $300 so it’s a little more plush’ and we got pillows and sheets for $5. We were living the life! My kids got jobs and I was here for seven years and I did my best modelling ever because there weren’t any other older models here. Then my kids moved to the United States and they wanted me to move — this was 22 years ago — I said, ‘I can’t move!’ but they convinced me to move. They said, ‘this time, you won’t have to live in a rent-controlled apartment, we will look after you.’ I’ve been back [many times] and I still have lots of family here so we’re pretty much Canadian that way.”

On how she’s seen the modelling industry change over the years:

“When I was 15 we did our own hair and makeup and when we did runway shows we would bring our own shoes and accessories. We always had to carry big bags with us. As a teenager my mom and sisters were my dressers so I never had bad experiences when I was modelling. I was a science nerd, I was doing my bachelor in science and that was my focus. Then I had three kids and during that time I was judging modelling competitions, teaching modelling classes and still in the industry but pregnant as I had three kids in three years. After that, I was asked to do mother of the bride shoots and I just thought, sure. Then I just started doing more and more modelling as [brands] wanted an older model. Now with social media there’s a bigger demand and then with CoverGirl it’s just gone through the roof.” 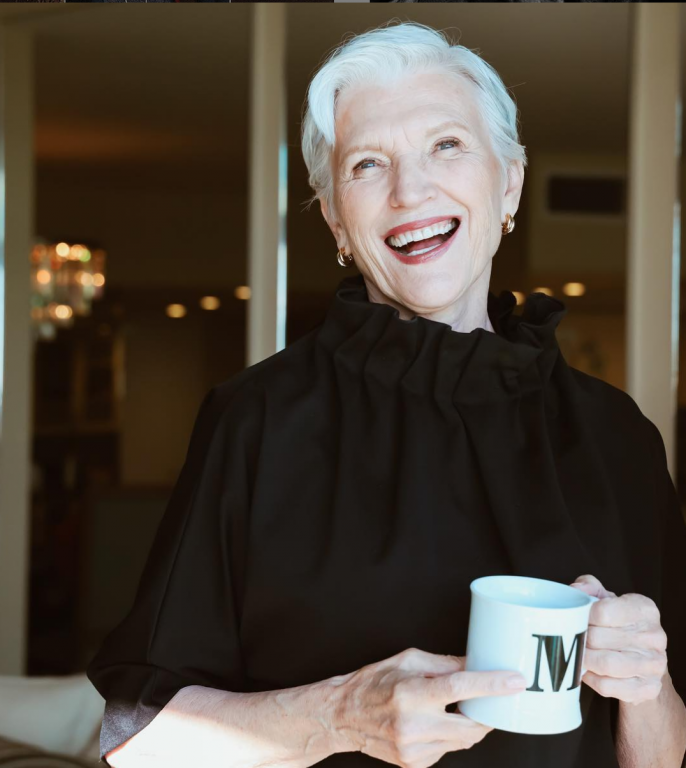 On why she decided to embrace her natural grey hair:

“I had this long blonde hair that everybody had and I was colouring it in various shades of blonde and orange and I got tired of doing that. I as in New York at the time and I was more focused on my dietetics practice and I was giving talks everywhere and I thought that it didn’t matter what colour hair I had as long as you have advice to give. So I just decided to grow it out but of course when you grow it out there’s a white patch on top. My best friend who’s a stylist, Julia Perry— who I met in Toronto, she’s been my best friend now for 27 years — she said I should cut it short. I had never had short hair before but I cut it very short and my model agency told me I would never work again and then they didn’t send me out for jobs for six months. I went and sat at their office and told them that I wasn’t moving until they got me out of my contract. I finally spoke to the most senior person [at the agency] and they eventually let me go. Then I went to a smaller agency and suddenly I’m booking Fashion Canada, I got a Joe Fresh campaign , a billboard in Times Square, a Verizon billboard in Madison Square Gardens, all within two months! So then I realized they did want women with grey hair. I’m not feeling any grey hair stigma at all.”

On CoverGirl’s recent announced that they are going cruelty-free:

“I think it’s fantastic. Because I’m a scientist I went to Coty where they do all the Covergirl products and they told me about being cruelty-free but it wasn’t common knowledge yet. Then when it actually got the Leaping Bunny certification and I posted about it, people were thrilled. I’m very proud.”

On her #1 essential makeup item that she uses everyday:

“I would say the Simply Ageless Instant Fix Advanced Concealer ($12). I get dark circles around my eyes and at the side of my eyes and redness around my nose and my sun spots. Just a light application really does make me look younger.”