These statement earrings, beaded patches and elegant rings helped me reclaim my identity and understand my culture 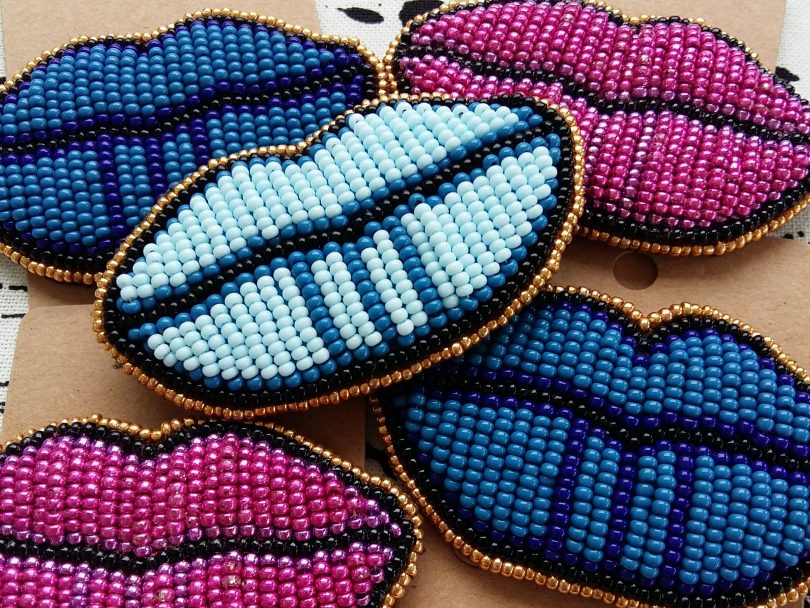 I was born and raised on Six Nations, Canada’s largest First Nations reserve. Yet, I don’t speak the languages of my ancestors. Unlike many of the friends I grew up with, I can’t pow wow dance, I don’t practice the Longhouse religion and I don’t have the “rez accent.” My ancestors made choices—both conscious and unconscious, willing and unwilling—not to pass down the Mohawk and Cayuga languages and traditions. So there was no one to teach me, and instead I gravitated toward what urban-centre teens were into: movies, fashion and hip hop.

During those teenage years and into my early twenties, I felt uneasy about the divide between how Indigenous I looked (dark hair, dark skin, almond-shaped eyes) and my lack of Indigenous culture. As a result, I never wore turquoise jewellery, or hats embroidered with “Native Pride,” because I honestly didn’t think that I deserved that pride—“She doesn’t even say ‘skoden,’ she says, ‘let’s go then,’” I imagined my classmates, whose parents more actively promoted their culture, saying with confusion.

Back then I didn’t understand the systemic racism at play that led to the loss of language, religion and ceremonies in my family. I blamed myself, and further turned away from my culture. But my thinking started to shift in 2015 with the Truth and Reconciliation Commission. Seeing the rising up of Indigenous people with #IdleNoMore and Standing Rock made me understand the context of my upbringing and gave me compassion for myself and my family. I began seeking out positive stories of Indigenous resilience, which boosted my cultural pride. That new sense of place among my people, coupled with the comfort of being in your own skin that comes in your 30s, helped me become secure in my identity, and understand that I’m no less Indigenous than any other person from Indigenous communities or urban centres.

A small but significant way I’m now expressing my culture is through the very accessories I shunned in my youth. I’m choosing to spend my dollars on handmade items that support my Indigenous brothers and sisters, who are creating beautiful contemporary jewellery based on traditional motifs and beadwork. These accessories easily slip into my more mainstream wardrobe, subtly signaling that Indigenous pride I always longed to feel.

Wearing pieces from these designers allows me to broadcast the Indigeniety I’d previously felt unsure about, while also encouraging others, Indigenous and non-Indigenous alike, to support these cool creators. (You’ll always catch me tagging them on Instagram.) Here are just a few of my favourite modern Indigenous accessories designers to shop now.

The Hamilton-based Cree/Metis designer is already well-known in the Indigenous fashion scene, and while her high-fashion garments in rich fabrics are certainly covetable, it’s her collection of fine jewellery that I’m really drawn to. DeMontigny’s Morning Star collection was inspired by the symbolism and the graphic lines of the star symbol: “The Morning Star represents hope, a new dawn and new beginnings… we all need more positive messages in our lives…and who doesn’t love diamonds?” the designer says. In addition to the on-trend signet ring with a single diamond, and a dainty sterling silver double-star ring, DeMontigny also makes diamond engagement rings and wedding bands with an eight-pointed star that she says symbolizes love and hope.

Brit Ellis is a Haudenosaunee Toronto-based beadwork artist who excels at the unexpected: Her seed bead creations take the shape of alien pop sockets, a series of succulent patches and a beaded vulva you can wear as a patch or show off in a frame. She describes her style as bold, colourful and layered, just like herself and the Indigenous people of her generation: “So many of us are diasporic on our own land in so many ways and have had to find our ways home to community one step at a time. My beadwork is reconciliation. My beadwork is good medicine.”

Cat eye sunglasses with beaded arms, elaborate statement necklaces with a number of beaded teardrop shapes and handbags adorned with metallic beaded embellishments are signature Helen Oro designs. The artist uses saturated colours, blingy beads and bold patterns. “I definitely try to think outside the box when creating,” says the Plains Cree designer from Saskatoon. “I’ve been inspired by Lego and neon colours lately.” Despite working with oft-used material of Indigenous creators, her beadwork style is decidedly non-traditional, as she aims to create fun and innovative styles that stand out. “My beaded statement sets can be anywhere from red carpet glam to neon festival ready,” says Oro.

Neon laser-cut bison horn shapes attached to beaded double hoop earrings and clear and black acrylic arrowhead earrings are a true marriage of modern materials and traditional iconography. They’re the work of Indi City by Alexandra Manitopyes and Angel Aubichon (Peepeekisis Cree) from the Flying Dust First Nation in Northern Saskatchewan. Aubichon is inspired by her Kohkum, Agnes, and has dubbed her style as “Kohkum Chic”—vintage inspiration remixed for a modern woman. She recalls the vivid details and smells of helping her grandmother, with her Kohkum always ready with thread, needles, glass beads and hide for her floral designs. “The smell of moose hides, a wood burning stove, tea and dry meat remind me of her and her creativity,” the designer says.

Indigenous tattoo-inspired lip brooches made out of seed beeds are a statement piece on more than one level. Made by Theresa Stevenson, Plains and Swampy Cree from Fisher River Cree Nation in Manitoba and George Gordon First Nation in Saskatchewan (currently based in Toronto), the red, black and blue brooches with tattoo lines are an homage to “all Indigenous people who have reclaimed, or held onto their nations traditional practices in spite of colonialism’s attempts at cultural genocide. We are still here. We are still strong. We are and always will be beautiful.” Stevenson adds that she often hears that Indigenous people have to weave their way in between two worlds—their culture and mainstream society—a predicament that finds its way into her style, which she describes as “an intertwining of traditional values and aesthetics with contemporary design.”

The work of Mad Aunty, aka Joi Arcand, blends her Cree language with jewellery, setting laser-cut cursive and syllabic Cree Words inside heart-shaped hoops, on stainless steel dangled earrings and on sterling silver chains. “I’m inspired by the language and how the graphic elements of syllabics are conversation starters,” she says. The Plains Cree visual artist originally from Muskeg Lake Cree Nation in Saskatchewan, now based in Ottawa, has also had her creative work displayed at galleries across Canada.

Warren Steven Scott is new to the design scene, having spun a runway show during Indigenous Fashion Week Toronto in 2018 into a booming accessories line. His laser-cut acrylic earrings come in a rainbow of colours and shapes, many of them inspired by Coast Salish art—he’s originally from White Rock, B.C. and is a member of the Nlaka’pamux Nation. “Coast Salish designs have strong shapes that I pulled from, which can stand on their own,” says Scott.