Ready to splurge on a top-of-the-line tool? Here's the one you should choose. 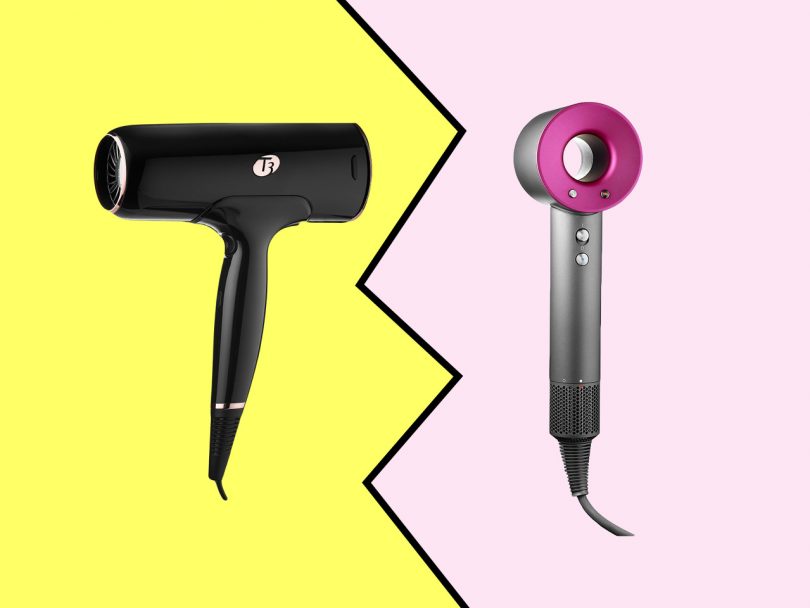 Newsflash: not all hair dryers are created equal. You might think you can use any old tool and your hair won’t know the difference, but as we learned when Dyson launched their Supersonic in 2016, some hair dryers really are better than others. The Supersonic, which is packed with the same vacuum tech Dyson is known for, rings in at just under $500—and people rave about it.

So, when we found out T3 was launching a new hair dryer, we decided to see how it measures up against the Supersonic. Five editors here at FLARE, Hello! Canada and Chatelaine evaluated each dryer based on dry time, weight and functionality to determine which of the two is our top pick.

This black-and-rose-gold dryer launched just last month, and it’s powered by T3’s DigitalIon Air Technology, which the company says delivers a faster dry and smoother, shinier hair. It also has a volume booster switch, five heat settings, two speed settings and a cool shot button. Its most innovative feature is the auto pause sensor—it automatically turns the dryer off when you let go of the handle.

“It’s more ergonomically friendly and lightweight than its predecessor,” says Mishal. But, if we’re comparing it to the Dyson (which we are, obviously), it’s definitely the heavier of the two.

The attachments knocked this dryer down a notch for most of us, since they were tough to lock in and then remove. “Getting the attachments on was a mess,” says Prescylla. “It took me about 10 minutes because the one I chose just wouldn’t fit. I also wanted to flip the attachment to make the dryer go in a different direction, but it doesn’t let you do that.”

The T3 has a ton of settings, including the aforementioned volume-boosting switch, which removes the smoothing ions and helps your hair get to its fullest. “The volume booster switch really sets this dryer apart as it gave my mane some extra oomph and is a totally unique feature,” says Emily. “And let’s be real, the dryer design is chic af, you just feel fancy using it!” That said, the fact that it shuts off when you move your hand away from the sensor can be a little frustrating. It’s great if you’re setting it down a lot during styling, but sometimes a subtle finger shift can stop the airflow.

Built with a digital motor just like its Dyson vacuum and fan cousins, you get a high pressure, focused stream of air that dries hair super fast. It has four heat settings, three airflow settings, a cold shot button and an ionizer. According to Dyson’s research, it’s six times faster than the average hair dryer—and a third of the weight.

Most of us found the Supersonic relatively light, and evenly balanced since the heaviest part (the motor) is in the handle. “My bird arms get weirdly tired if I’m holding any kind of hair tool for too long, and that definitely did not happen with this dryer,” says Tara. “For the amount of power it has, it was surprisingly lightweight.”

The Supersonic comes with two smoothing attachments and one diffuser. “Getting the attachments on the Dyson was very easy,” says Prescylla. “They’re magnetic, so they literally just popped right on with no issues, and I really liked how I could easily change the position of the attachment to make the dryer go in different directions.”

The shape of the Supersonic makes it easy to manoeuvre around your head, and it’s easy to hold it while holding another styling tool since it’s so light. It also doesn’t have a back vent, which means you don’t have to worry about your hair getting stuck in it (this has almost happened to Mishal with other dryers). According to four of us, it’s easy to switch between heat settings, and never overwhelming since it only has two buttons. Nezariel had other feelings. “The Dyson was hard to control while also trying to brush out my locks,” she says. “Sure, navigating the buttons, adjustments and smoothing attachments was a breeze, but actually getting this bad boy to stay comfortably in my hand while drying? Real tough.”

And the winner is… The T3 Cura Luxe!

Majority rules, and Emily, Tara and Nezariel all picked T3’s latest dryer. But, take note: They all have finer hair. If you’ve got a thick mane and you’re looking for something that’ll dry it as fast as possible, go with the Dyson—it was the winner for Mishal and Prescylla.

Watch: How to make a messy bun with braids