Thai turkey meatballs: A healthy appetizer for your next party

I thought a test run of an app might be a good idea, and good thing I did. Also,, these meatballs are made with low-fat ground turkey breast – always a good option during this season of indulgence 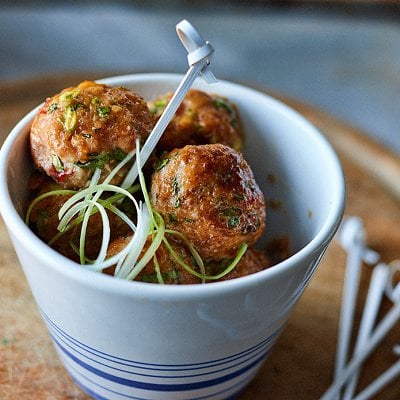 With at least one more holiday party on the horizon (welcome 2012!), I thought a test run of an appetizer recipe might be a good idea. And because I like to save veggies and dip (my go to party snack) for the warmer months, I wanted something hot and hearty. So I dog-eared Chatelaine’s Thai turkey meatballs (from the Holiday 100+ best recipes)…after all, who doesn’t love a good meatball?

Even better, these meatballs are made with low-fat ground turkey breast – always a good option during this season of indulgence. And they have a Thai-flavoured twist, with the addition of green onion, hot chili-garlic sauce, and fresh cilantro. Now these meatballs are intended as an appetizer, but the recipe said it makes 36 meatballs so I figured we could turn it into dinner instead (with a side of jasmine rice).

You simply whisk the egg with the onion, garlic, lemon zest, chili and fish sauce, add the meat, sprinkle with the cornstarch (for binding), stir in the cilantro, and you’re ready for ball making. Now this is where things went a bit off the rails for me: the mixture, as the recipe said, was wet. Like, really wet. So forming it into balls was tricky. I couldn’t do it with my hands (too sticky), but did discover two teaspoons helped roll the balls. But because the mixture was so wet, the balls immediately went flat on the foil lined baking sheets. I did get a tip after the fact to chill the mixture for 30 minutes before rolling, which I imagine would make these meat “balls” and not meat “domes.”

But once in the oven, they were quick to bake (about 15 minutes) and even though they were flat on the bottom (which prevented rolling and actually made them easier to eat!), they were delicious. I served them with the rice and a sweet-red chili dipping sauce, and the husband gave them a “thumbs up.”

Note: these meatballs don’t get super browned in the oven, in part because the ground turkey bakes up fairly light. But with the specks of red chilies and green onion, they look festive and pack a nice zip.